A while back I got a hold of a 3d printer, which I’ve been experimenting with since. This is one of the first successes: small boxes for D&D die sets shaped like dragon eggs. 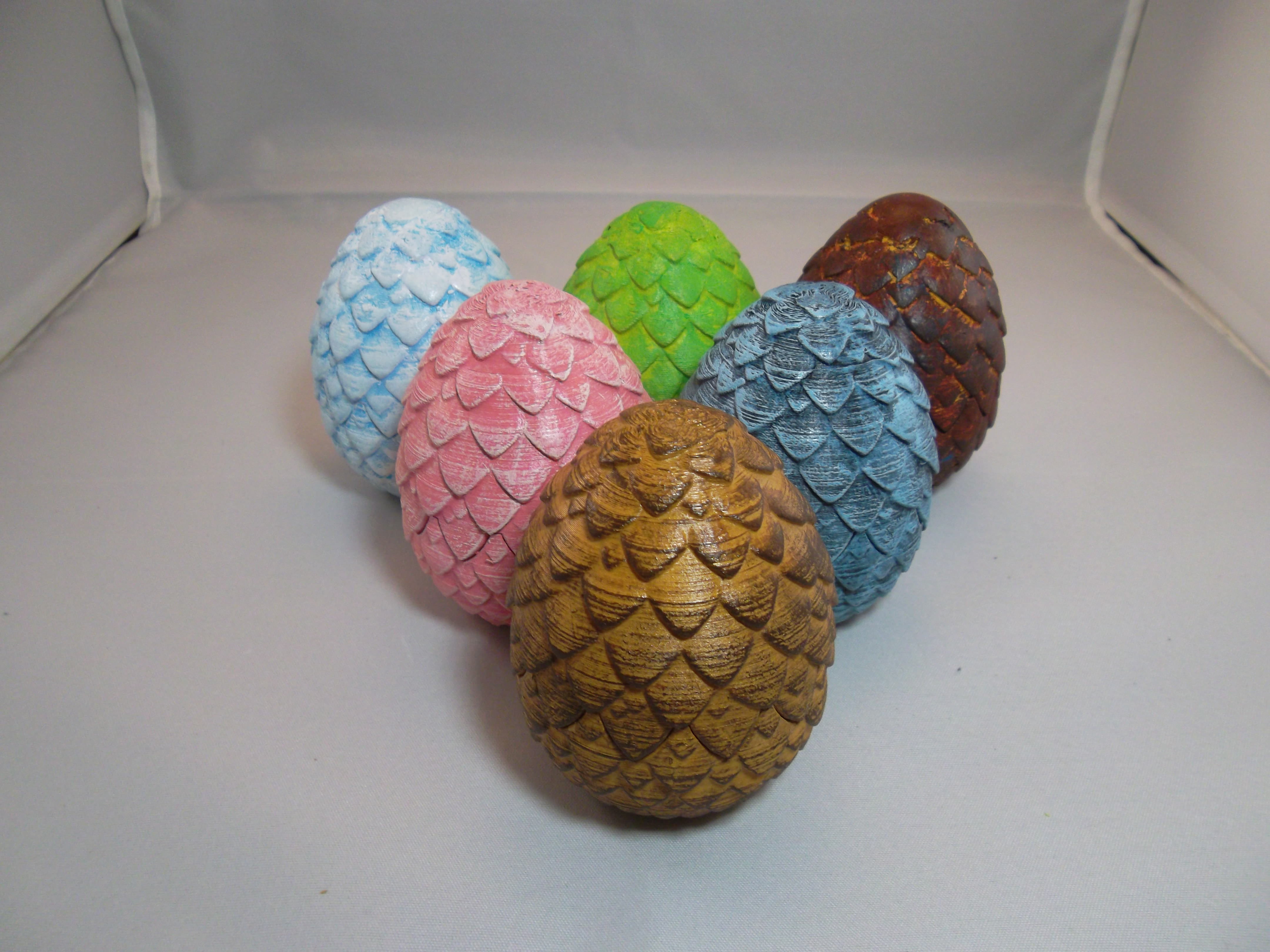 I’ve got six done so far, three of which are prototypes and three are of the final version. Specifically, the gold, blue/black, and pink/white eggs are final… 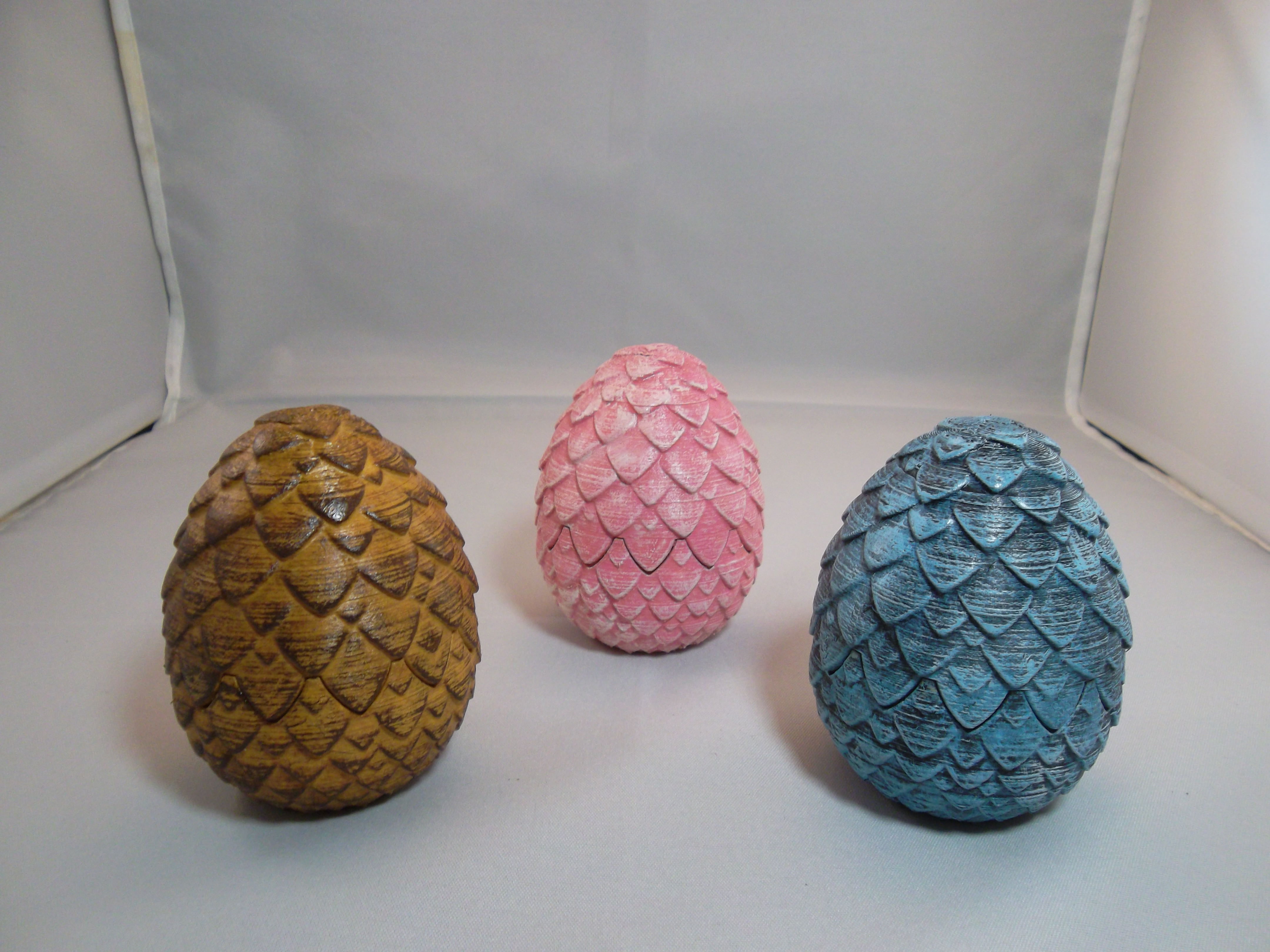 … and the maroon red, green, and blue/white eggs are prototypes. 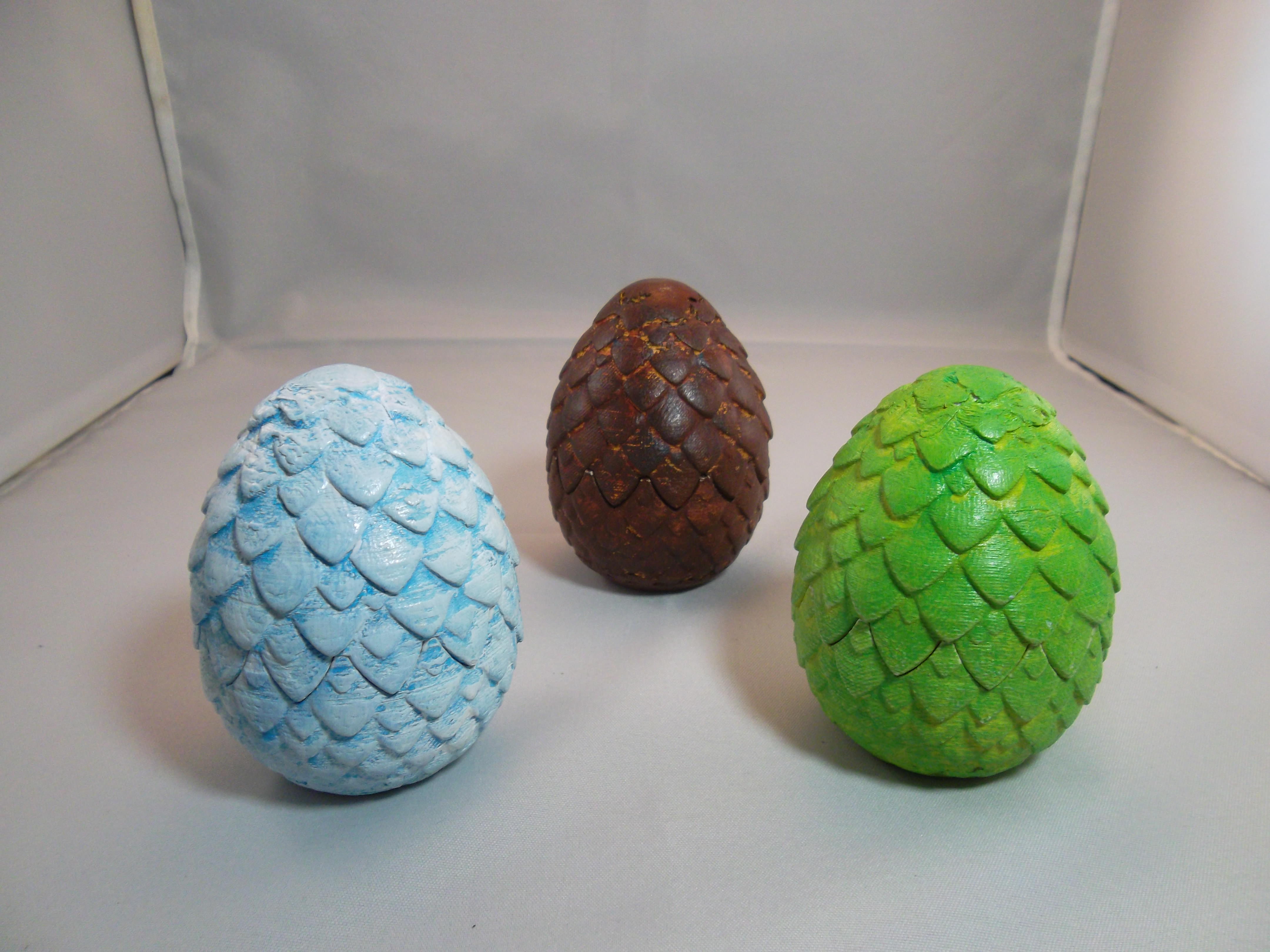 These are not different models per se, but prototypes in the sense that I had to experiment with the printer settings to get the parts to come out nicely. The tops of the prototypes are noticeably smoother than the final versions because I had to sand off support material, losing a lot of detail in the process. I’ve now found the settings that let me pick off the support material while leaving the print intact. 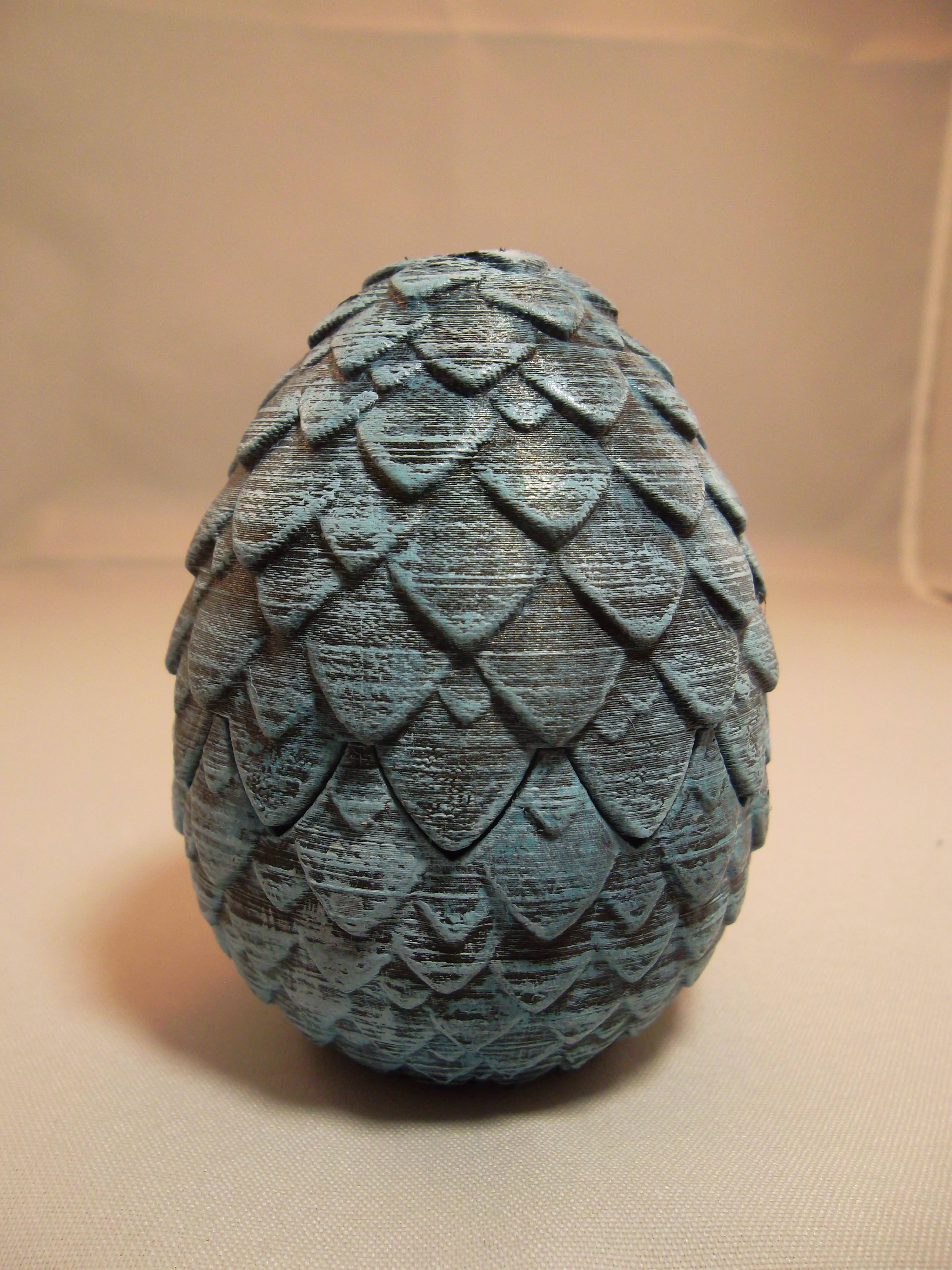 Each box is made of two halves that interlock through a ring of 12 scales that cross the boundary from the top to the bottom half, where they fit into recesses. These scales and the rest of the basic shape were modeled in SolidWorks, where I could accurately dimension them, while the rest of the scales were added through a custom brush in Blender to produce a more natural look. I glued four small rare earth magnets into the top and bottom of each egg so that the two halves hold together. 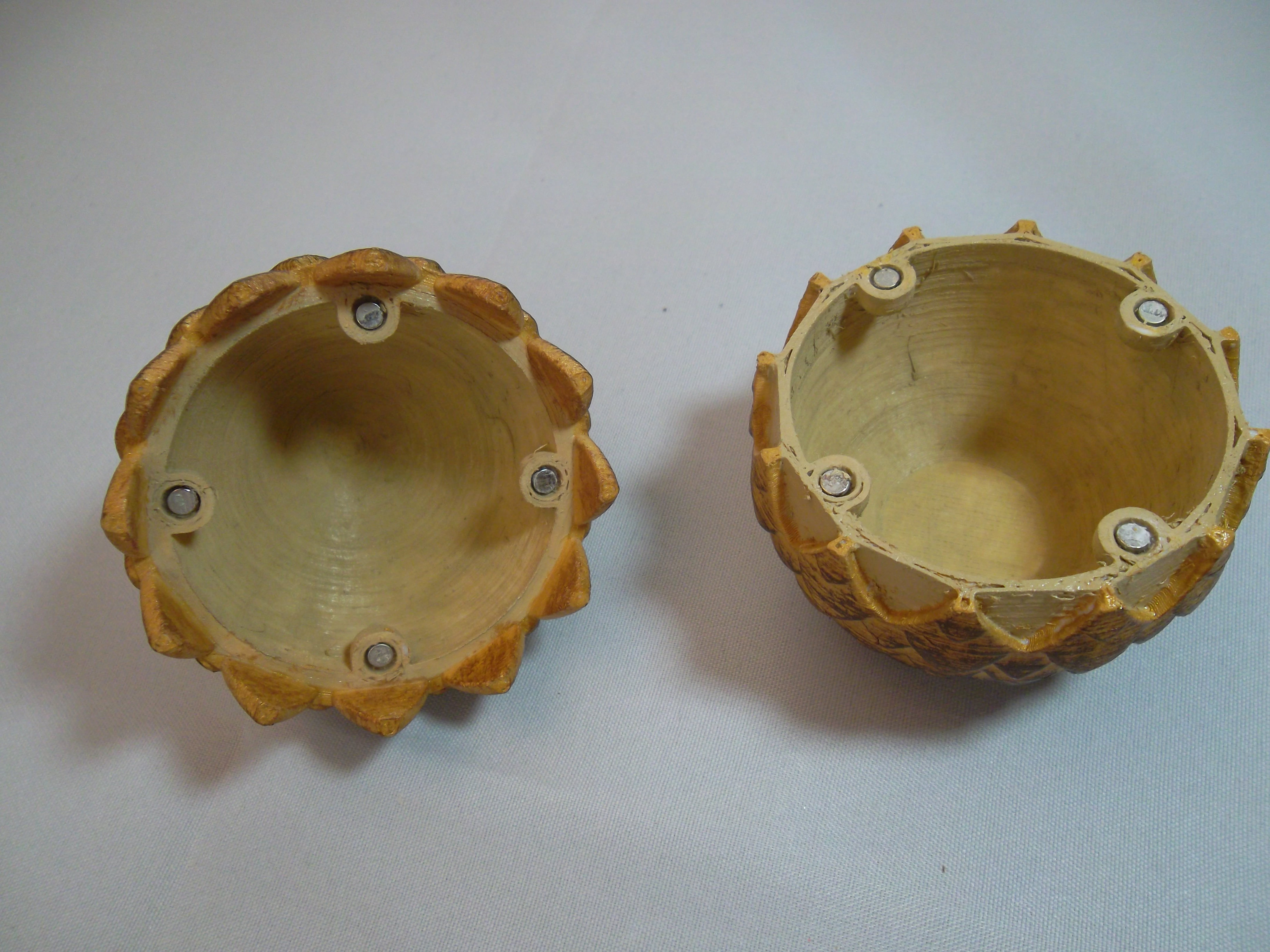 Lastly, each egg is painted with the colors of the die set inside. I’m far from great with a real paint brush, but I think I managed to match the colors fairly well excepted for maybe the pink one. 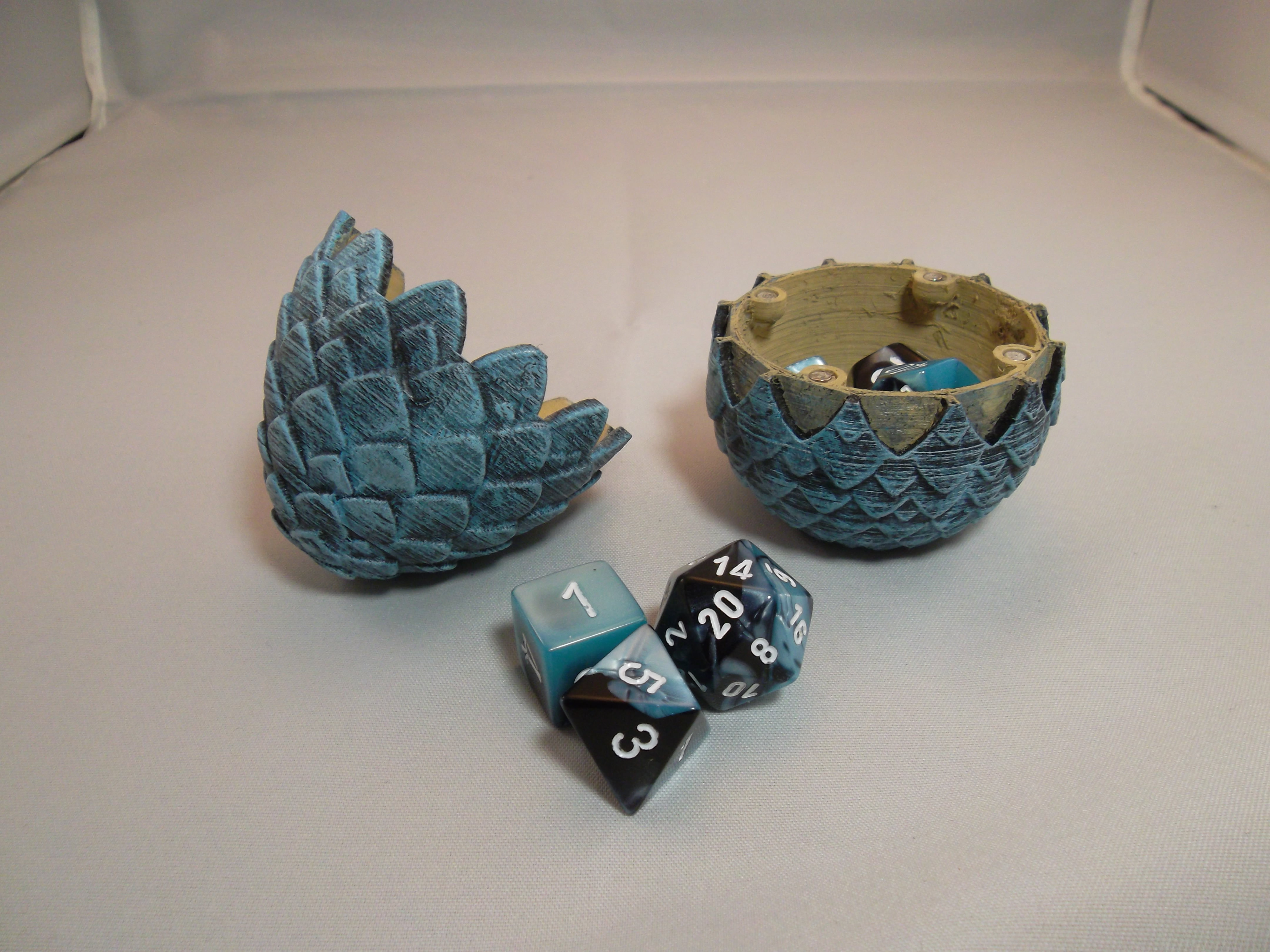 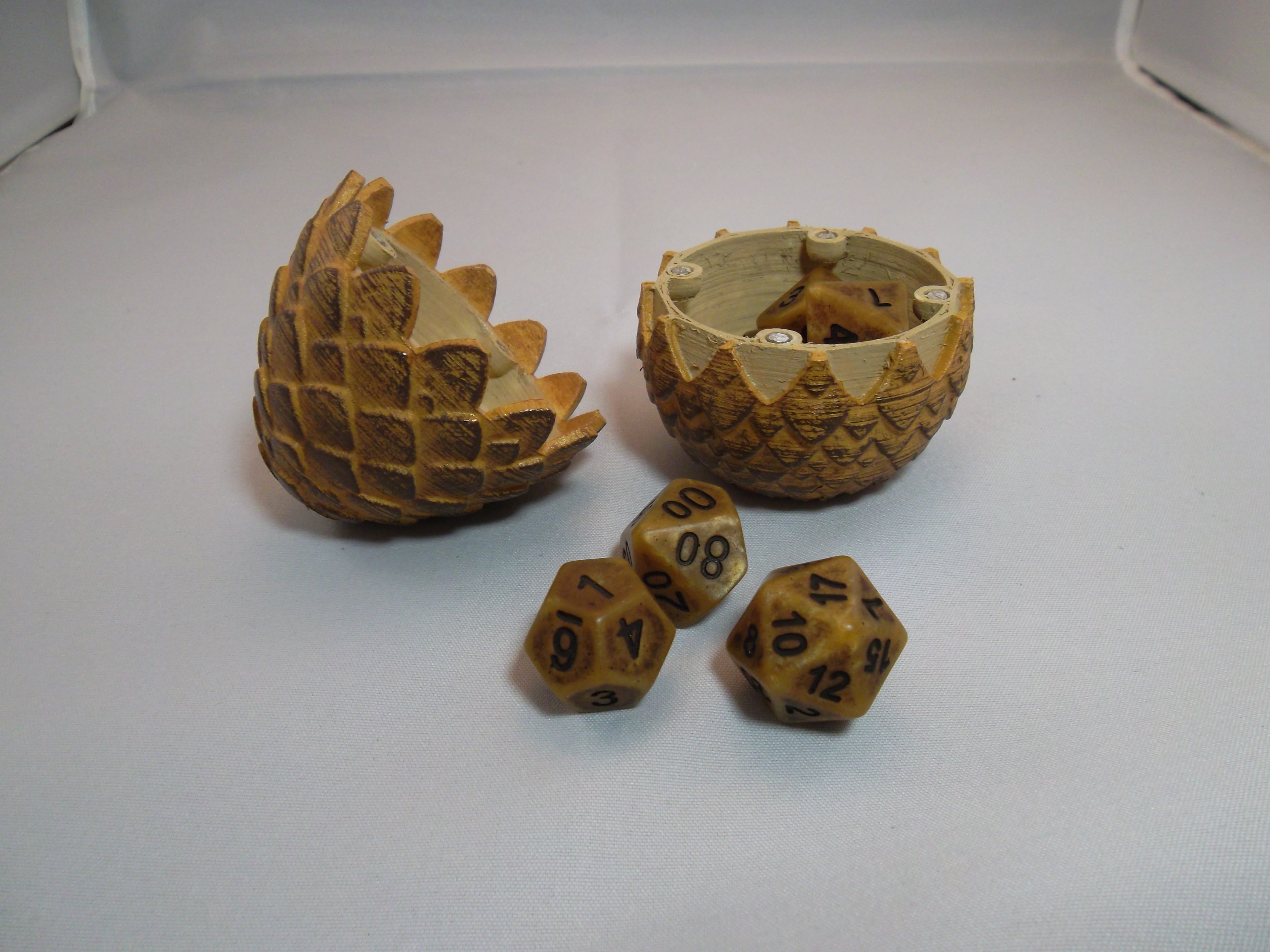 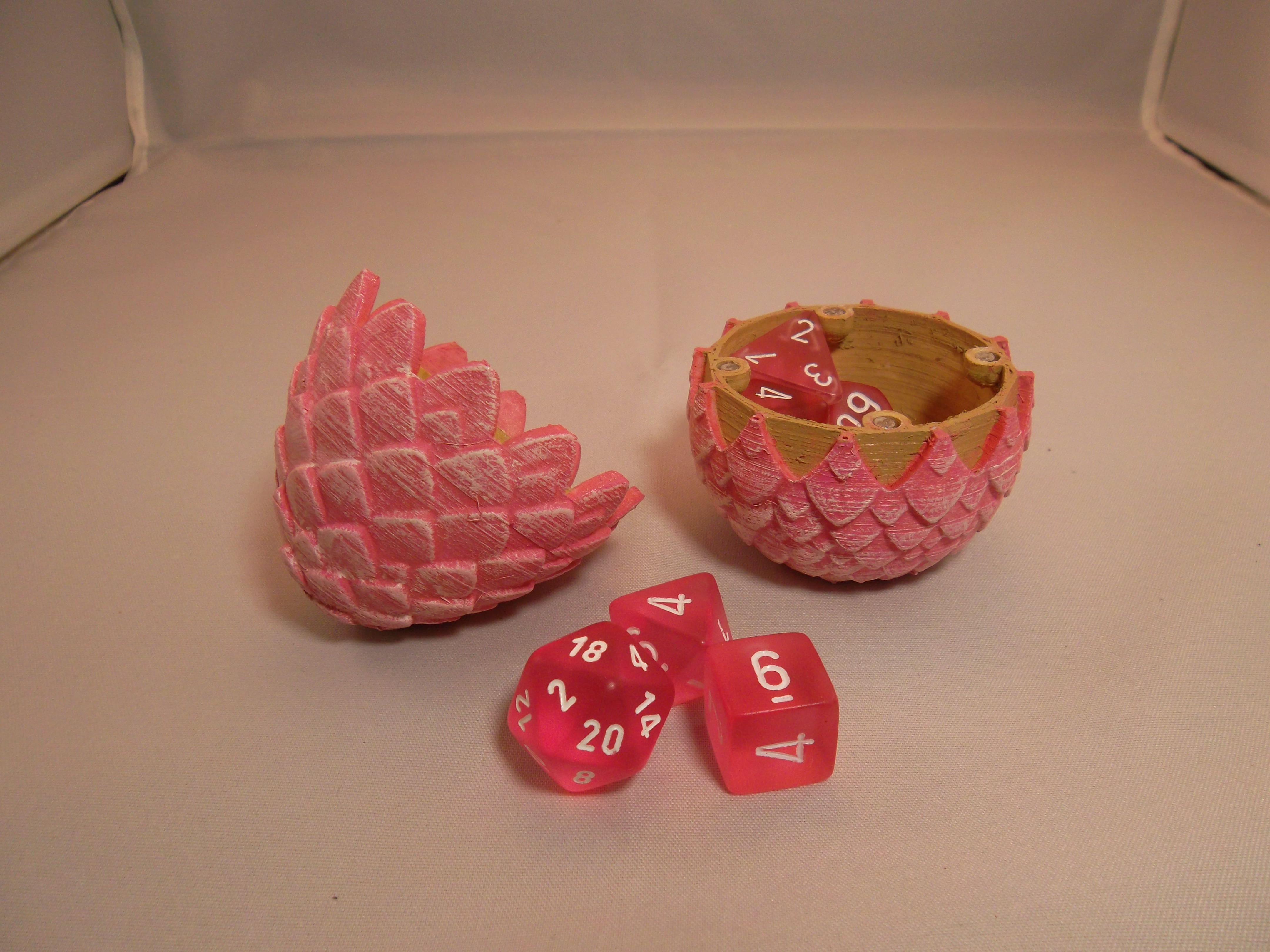 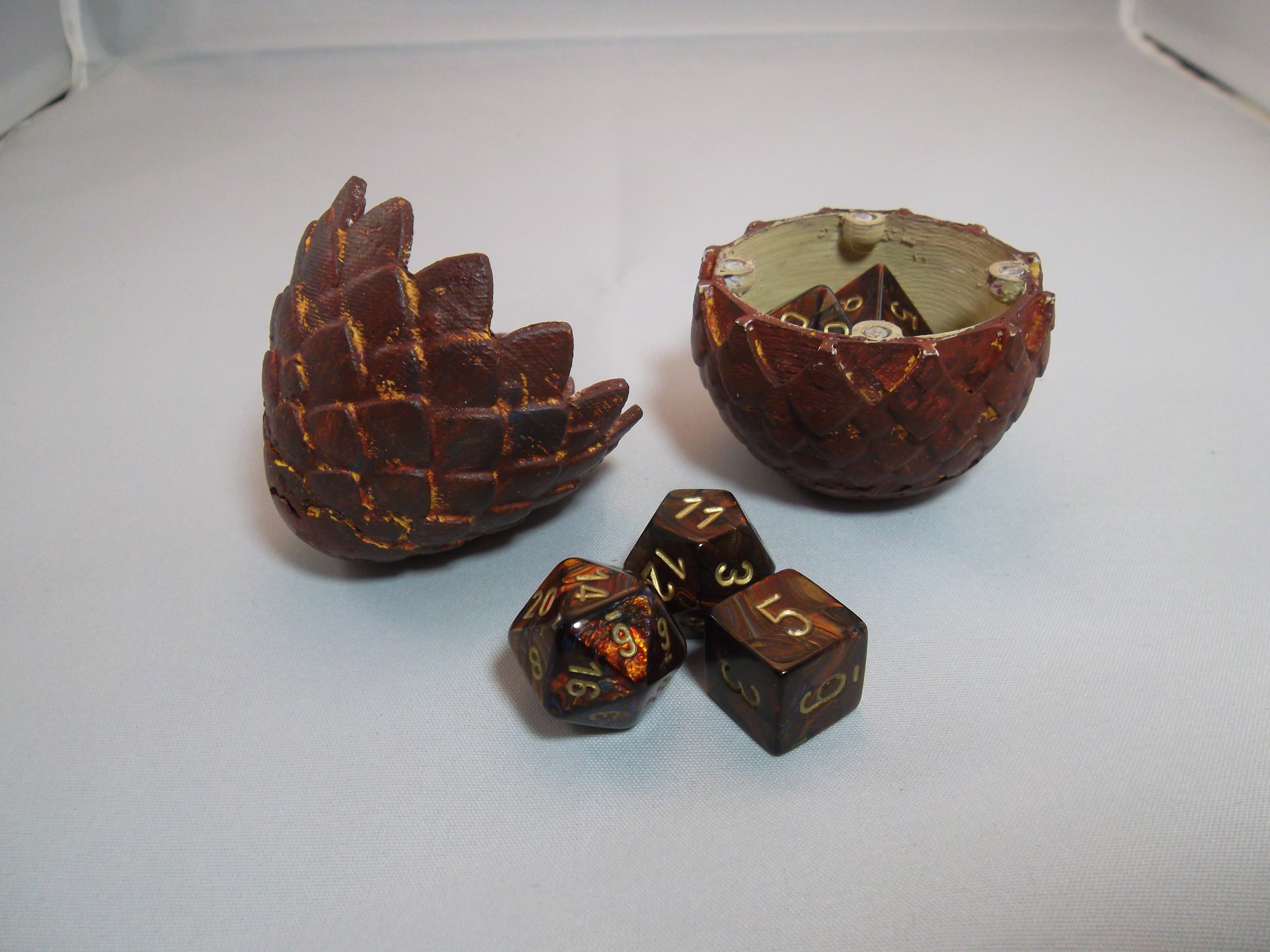 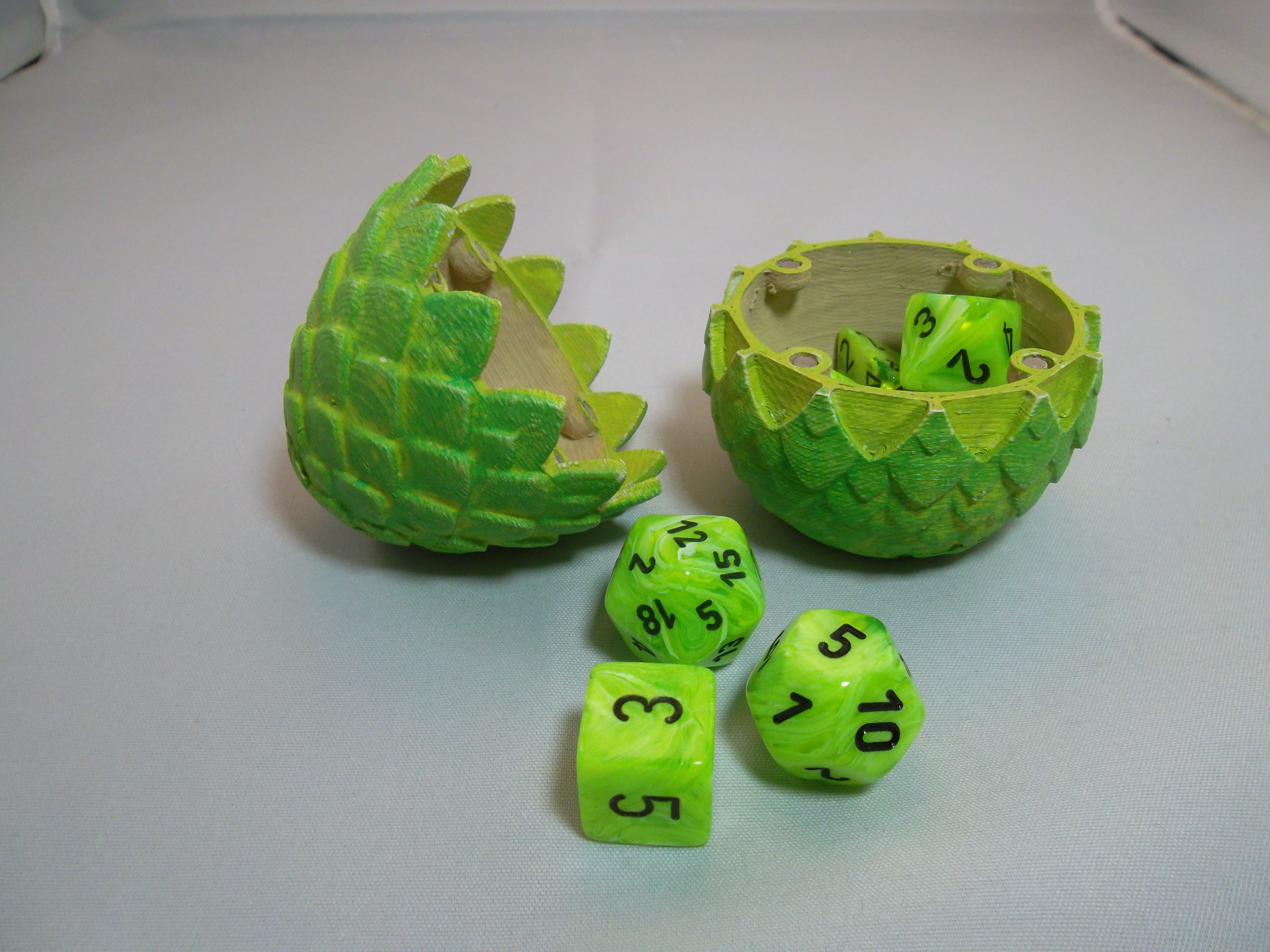 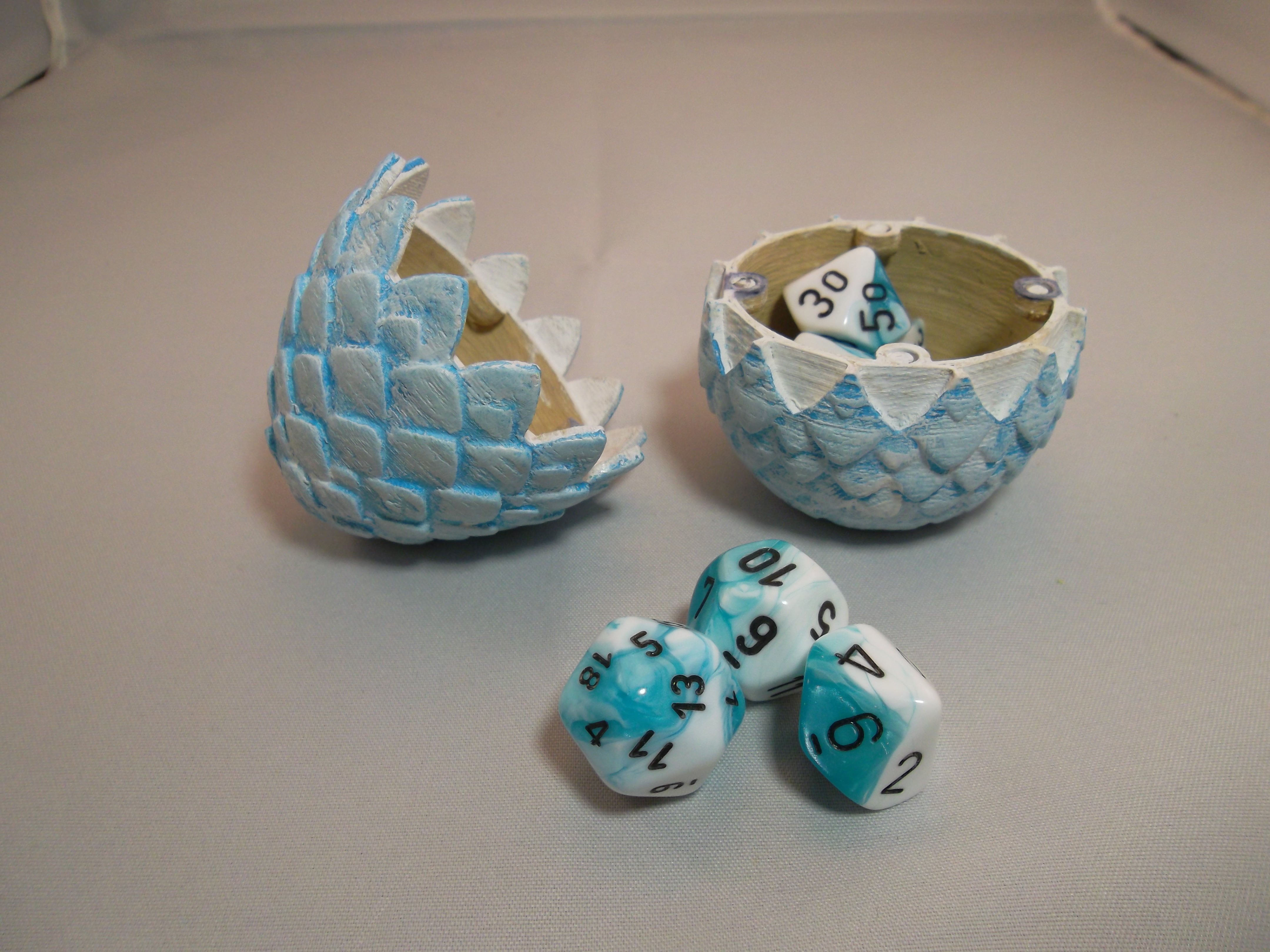 Excellent craftsmanship Scorpion. Although they remind me more of Sequoia Pine Cones, but I can see the scales for the dragons too.

Dang, those look awesome! They look pretty smooth for being 3D printed, perhaps the paint helped to fill out gaps.

Would they happen to be up for sale at any time? I’d love on for my dice. If not, you should totally think about it, there’s probably a decent market!

They look pretty smooth for being 3D printed, perhaps the paint helped to fill out gaps.

The finish out of the printer is pretty good, and I think the base color does help smooth it out a bit, but when I drybrush on the second color (mostly evident on the gold/brown and black/blue eggs) the layers do still show up. Personally I consider it just part of the 3d-printed aesthetic.

Would they happen to be up for sale at any time?

Now that I’ve got them printing reliably, I would consider it.

y’know, that would be a fun thing to buy, my birthday is coming up, I might get one

I do sell them on Etsy now, in a shop called “MyPrinterandMe,” if you’re interested. I’d make a specific topic on the boards for it, but since I don’t maintain master rank, I can’t do that…