“Pay me no mind, like all the others. What would a failure like me be of any threat to you…right?”–Duxbury during a hold-up/hostage situation on Etamin II.

The last bursting space exploration, the Race to Deplete the Frontier, was a maddening time for the Hero Factory universe. Those who were not out seeking to find and claim the last of reachable existence, were attempting to take the chasers’s last remaining currencies. Aside from ships and protective gear, nothing was sought more after than colonizer scout robots. These androids and drones were swift in finding suitable planets and satellites, laying the ground work for beginning operations, and establishing communities. Some units went well beyond their call and became renowned heroes for the history tabs. But success is known only to a few and many were left behind as useless debris.

With the huge success and popular of the Frontierbot “Revolver Sam,” several companies attempted to emulate the celebrity in their colony scouts’s design. The Amiga-Oragtrail Corporation and their Extravagant Escorter line was the most renown of the bunch. Their tagline claimed the Extravagent Escorters were, “The final guides the universe will ever need.” And when compared to the competition, this was the case. They were more powerful built, smarter, faster, could carry more equipment, and looked incredibly fancy with their silver and gold platting. If you were to go with anyone in the unknown and couldn’t manage to book Revolver Sam, the Extravagent Escorters were the ones you would want to take. Unfortunately, few ever would.

Due to some financial mismanagement, and the massive failure of their latest ship line, Amiga-Oragtrail was going under. The Extravagent Escorters were incredibly costly the develop and produce, and would require to under-price them to match competition. Their latest ship line was supposed to cover this lost capital until they could find a way to produce them cheaper and only sell the hundred that were made. With the failure of the ships however, the company was force to stop all production across the entire conglomerate and sell everything that could go. The Escorters were given a large marketing push and, while public perception was good, being five times above the price of the most expensive colony scouts on the market turned away even the wealthiest of gamblers.

Managing to sell at least ten of the one hundred units, it was not nearly enough to save them. Even if all one hundred could have been sold, it would only scratch a small itch. In desperation, the remaining bots were dismantled and sold for parts or pure scrap. Over before they had a chance, the line would become a footnote in history due to the heroics of the few surviving units.

That frontier was thousands of years ago, and since the advent of Hero Factory, even the most famous of heroes prior have been forgotten. DPO-0000004, or Duxbury as he is currently known, was one of these Extravagant Escorters. Or rather, one of the cheaper display and promotional units used to advertise the real deals. He is perhaps the last unit in existence to show that part of history. Almost no-one recognizes what he is and, even those that do, it matters even less. In these times, Duxbury is a creature control officer. Being sent to various planets to handle and capture dangerous animals (assuming Hero Factory doesn’t get the call first). Though sometimes he can’t help himself and when villainy is going on, he rushes in to help. Perhaps its just the old heroics in his programming or the legacy that he wishes to uphold, but whatever the case, the Extravagant Escorter is still an effective hero.

For this job, he primarily uses molecular shifting retaining pole. This metal tool can become malleable like rope and used as a lasso or back to being a solid chunk of metal by mental commands. If so desired, the retaining pole can deliver powerful shocks to incapacity creatures and/or beings caught within.Though aside from this, he only has a small knife and aging laser rifle to combat more violent critters. That, and his buddy Latcher of course.

Latcher is a techno-organic insect with a bad habit of catching prey and then forgetting to come back and eat them later. Duxbury encountered Latcher on one of his assignments and decided to keep him around. Since then this odd beetle has been helping capture other creatures by nabbing them with its odd lasso like tongue and coating them in slick slime or bashing them upside the head with its flail-like tail. 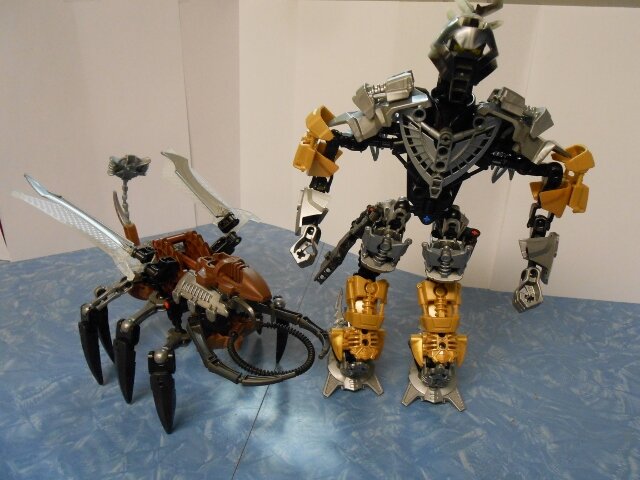 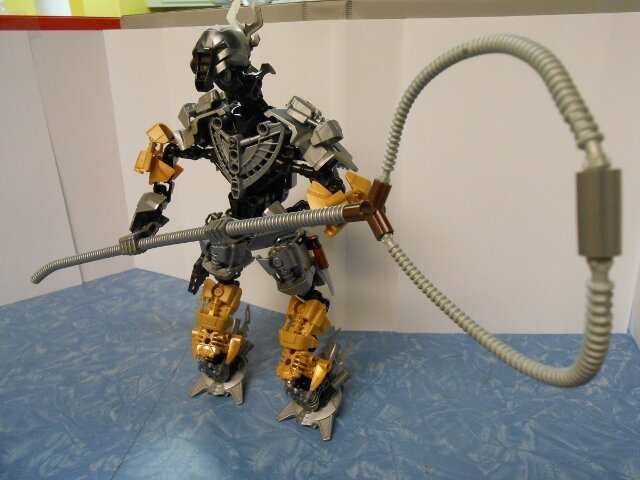 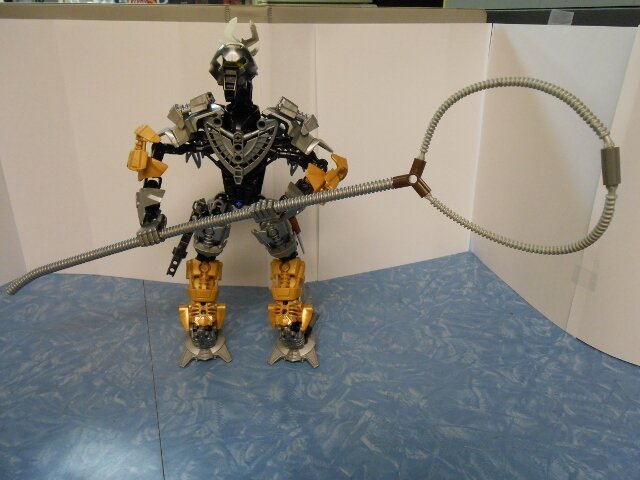 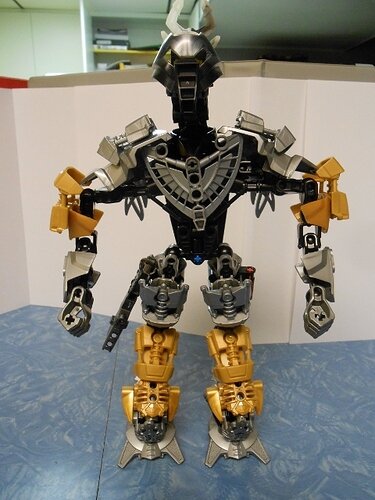 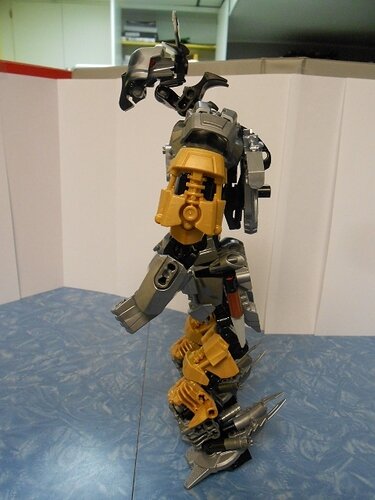 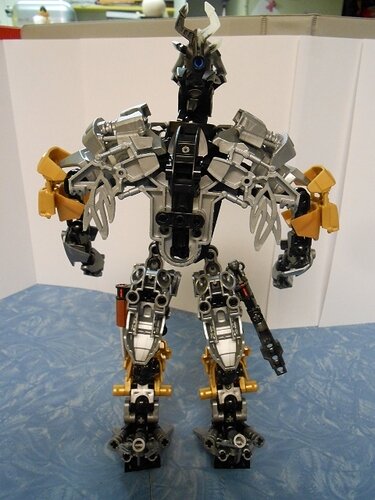 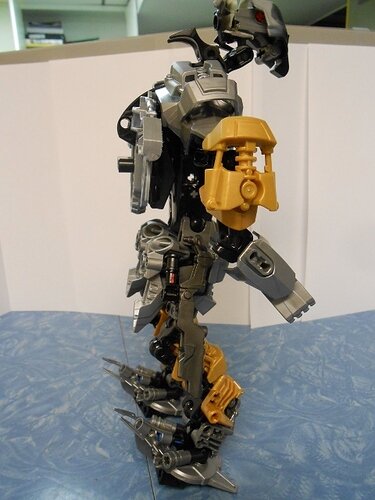 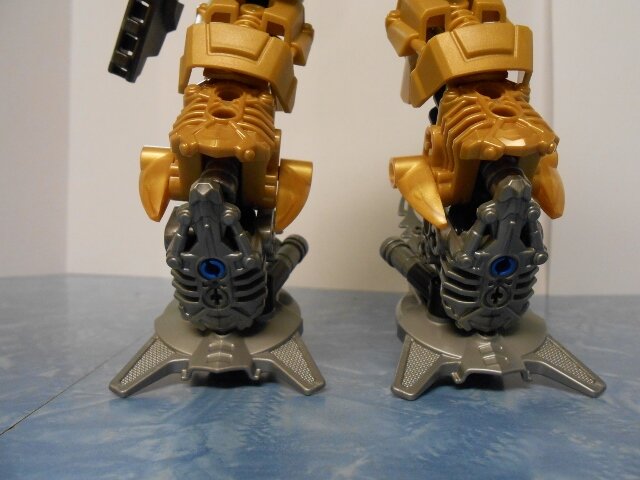 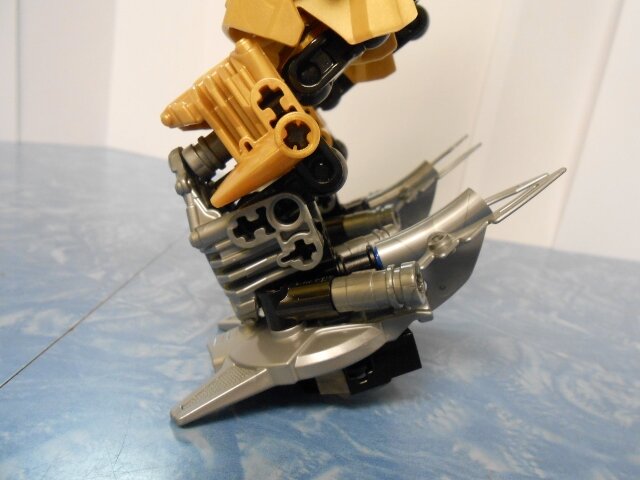 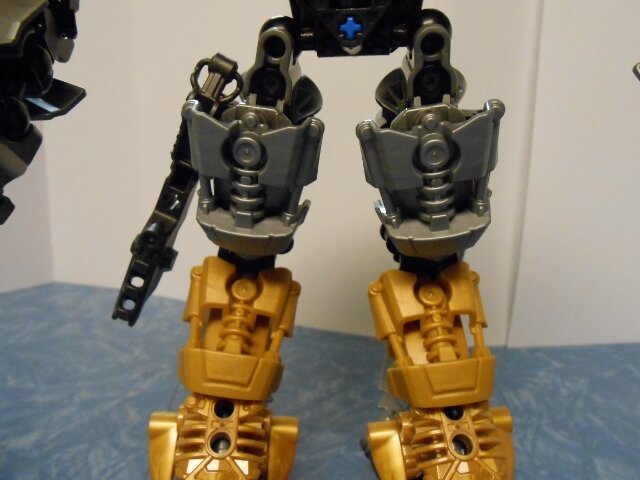 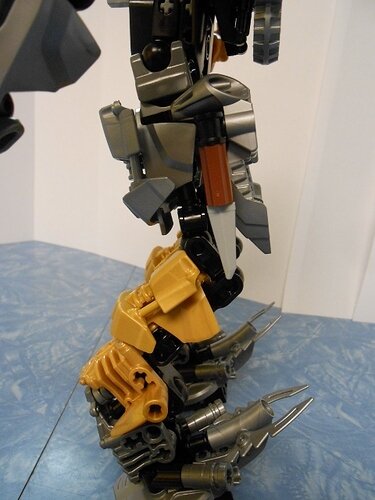 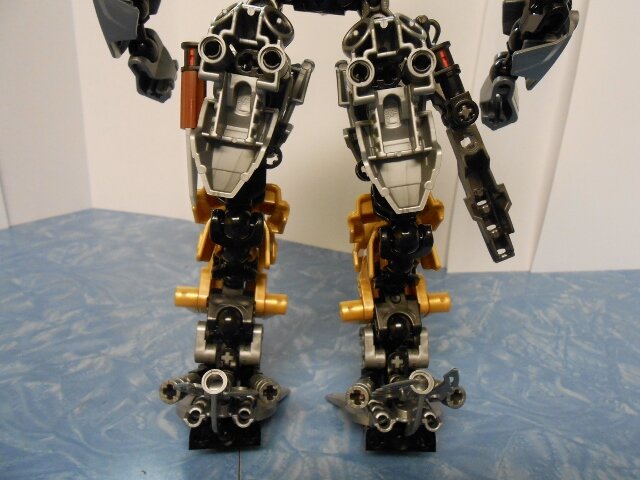 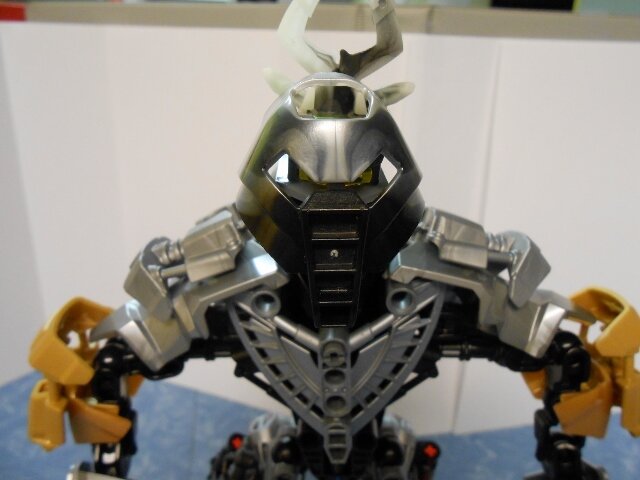 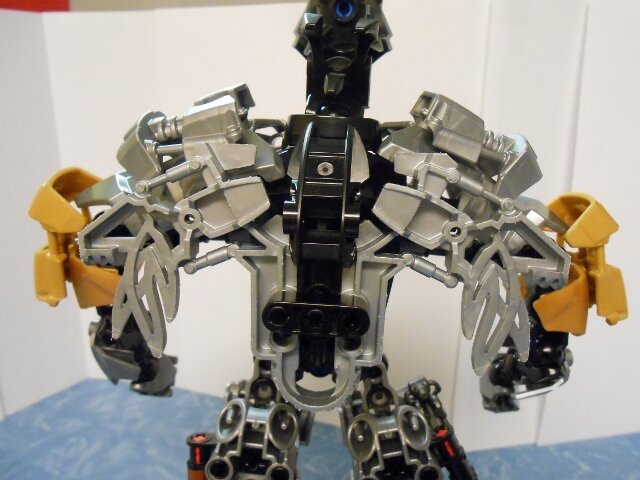 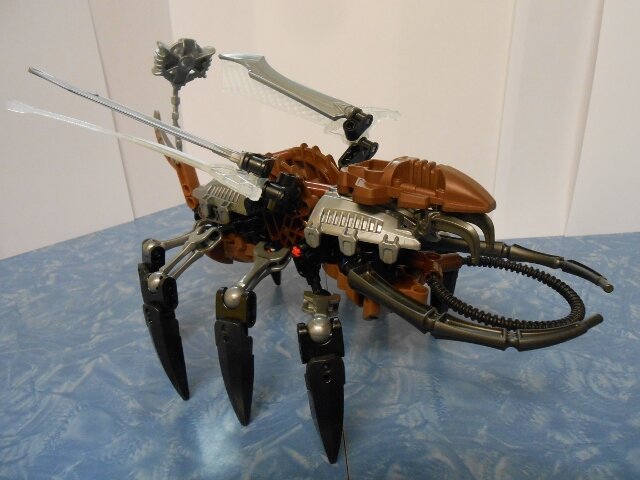 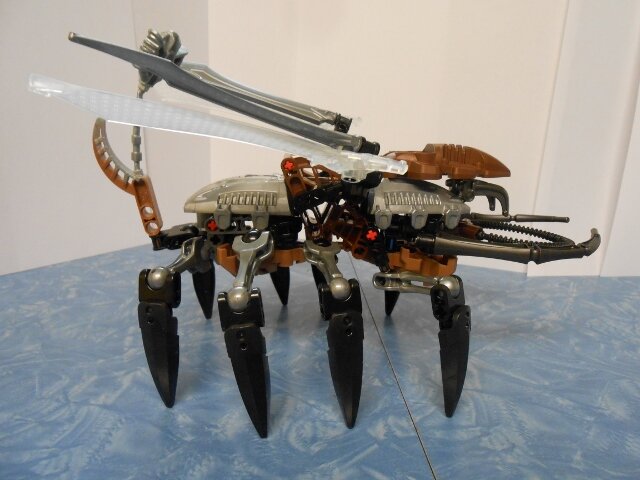 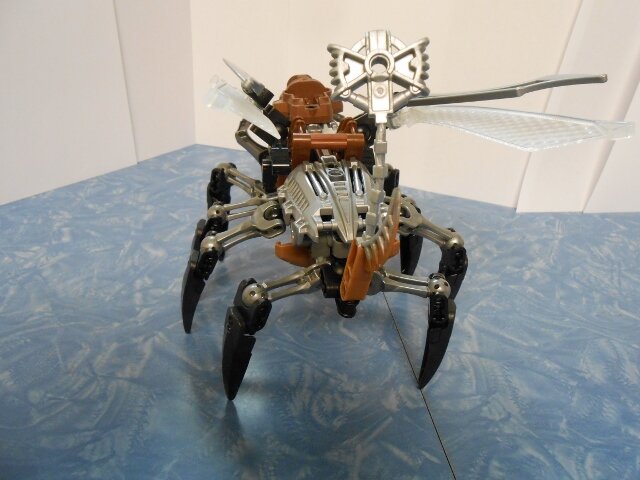 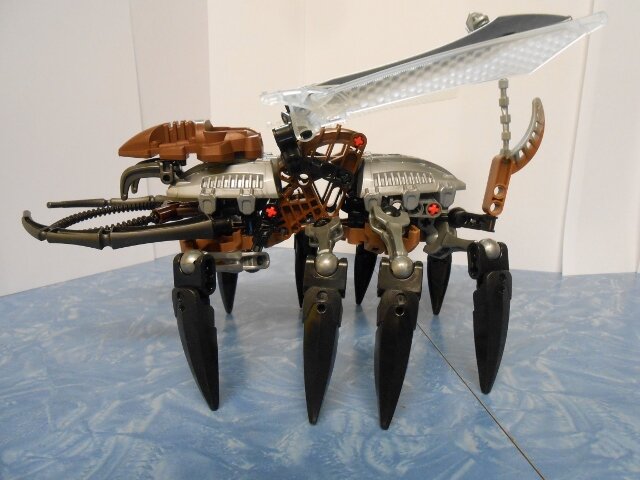 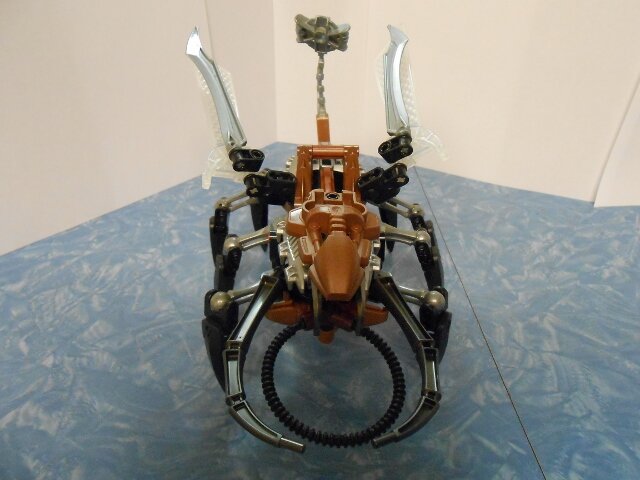 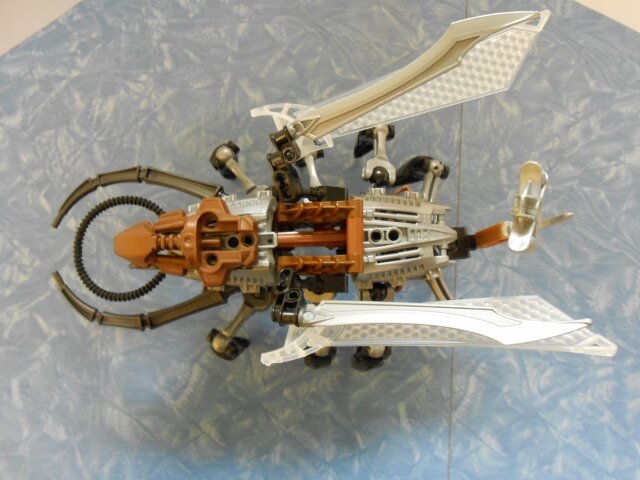 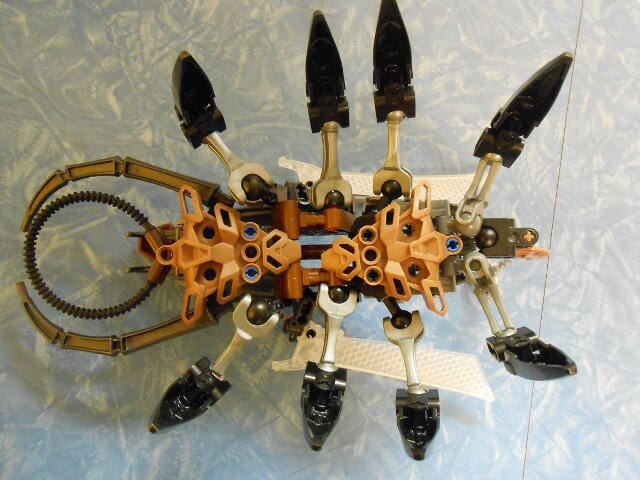 Thank you. Latcher is my preferred part of this duo, even though he was more of a quick table scrap design.

The body of the Duxbury seems to be a little bit clunky and unstable, and the back areas seems to be exposed. Perhaps try using some standard hero factory armor for the back and search on youtube for how to make more stable lego bionicle builds, it may help.

The body of the Duxbury seems to be a little bit clunky and unstable, and the back areas seems to be exposed. Perhaps try using some standard hero factory armor for the back and search on youtube for how to make more stable lego bionicle builds, it may help.

Could you be more specific in your statement of it being clunky? I’m afraid it’s a tad too vague for me to understand what you’re getting at. If you mean the aesthetic being uneven, much more detailed in the lower legs and too smooth and simple the further up it goes, then I would agree. I ran out of parts to make a completely consistent texture, but decided to keep going to see how it would end up.

As for stability, again, you need to be more specific. Since it is in reference to the body based on your comment, I can tell you that the torso is quite solid. The main joints in the legs where the gold and upper silver meet are the only weak area. That could have been solved with some friction add-on pieces, but it would also throw off the height and aesthetic more.

The back is also covered quite well, certainly more than the front. During my building, I did try various CCBS torso shells as possible coverings. But if they weren’t too small due to how broad the torso is, then they would be sticking out far too much and make even more gaps. The XL torso pieces also would not work as he is just small enough to where the pieces are just too big. He’s in one of those odd in-between sizes that CCBS just doesn’t accommodate well.

And sure, I don’t doubt I could have found more standard humanoid designs elsewhere, but I prefer self experimentation. If you ever look at my MOCing history, I’m not one for ordinary builds, I tend do some more odd designs. Sometimes it works out, sometimes it doesn’t. Sometimes they’re boring and simple, or a simple build done in just a unique enough way. And that level of uncertainty and chance is something I much prefer over trying to emulate some other established builds.

ouchi wouchi text wall
it’s a pretty cool moc, and I like the little scorpion guy quite a bit
I would definitely improve your setup, as the crooked background and dim lighting take a lot away from the moc
but you take your pictures on a ten year old android phone in your closet i don’t have any money ok
the feet feel a bit out of place, but it’s fine from the front and doesn’t distract from anything else

Yeah it was the legs I’m referring to, they look like they would just make the moc fall over all together rather then keep it up straight.