Greetings again people! Haven't been MOCing for while or put an effort for MOCing last few months (Due to my college and my finals.). Well, except I made some final adjustments on some of my MOCs, making some finishing touches. Anyhoo, let's go on to the topic, shall I introduce to you, Eciar, The Shock Striker!

But, that's where I didn't felt right about Eciar's first appearence. It wasn't fitable for rest of my collection, it lacked construction's complexity and it was way too simplified for my taste. I never finished her first version though, but that's where I considered on July 16' to rebuild her. Main reason was Metal Gear Solid 5 game... And Female Skulls... (I'm afraid I'm having MGS fever.).

Something what I'm glad with Eciar's second version is more feminine look (Yeah I tend to build female MOCs with feminine appearence, but trying to avoid overly sexualized designs as possible). Though the nuva butt design is alright but same time eh, I know, but that probably will be my first and last experimenting to use Nuva shoulders as rear. Also, her hip joints are somewhat limited, but also the balljoints tends to pop off from her hip connection.

One thing that I reused a specific build, is her upper torso. At first glance it looks different (somewhat), but let's say here that I reused my Gali 3.0 upper torso built on Eciar's build, with a minor redesigning though.

As for inspirations, Eciar's Rail Blade/Pony tail idea came from Llortor's (DA) self MOC Eltanin's ponytail design, which I approve the idea he came up with. Second helpful inspiration is her back neck guard thing (Comment if there is a specific term for that, it would be appreciated ), which is from The-Dapper-Scrapper aka formerly known as Fenrek. I got inspired by one of his MOCs, Thronxx of name MOC.

While Eciar is somewhat old MOC that needed adjustments and her biography (Though I might rewrite some sentences or some details on her story), I'm quite pleased how she turned out. Could have been done a bit better I think, but as for now, she is an alright looking MOC, which now she fits for my collection. Comments and criticisms are welcomed as always, they're always appreciated to help me for making better looking MOCs in future. As for now, I'll see ya around soon!

The shaping is absolutely phenomenal as with all your mocs, colourscheme is pretty lit too. Also DEM GREEBLES

The torso and upper legs are too beefy and greebled compared to the rest of the moc. While the greebles aren't necessarily bad, they do make the moc appear really messy.

I love the use of system here and there, and the color scheme is great.

The shaping, like my boy Jayfa said, is absolutely brilliant. Even my mother, who can barely grasp the concept that my own bionicles differ in stature, said "hey is that a girl bionicle?"

This is infinitely better than the first version. The color scheme is great, and the greebly feel (for the most part) is more only for the white sections of the moc, so the differing textures between the blue and white really work.

One last tiny thing: I suggest you take a look at the links; the flickr one doesn't work for me, and the deviantArt one required another link in the page itself to see a full gallery. This might just be me though.

Thank you! And thanks for noticing me about messed up links, I missed completely that when I posted this post

As has been said, the colors and shaping are phenomenal.

@MrBoltTron, you've done it again! Fantastic as usual, what paint did you use for that mask?

Awesome MOC. Very fond of its appearance. Love the colour choices as well.

This is absolutely great, the shaping is fantastic plus I love the use of system.

And you managed to integrate a nuva butt and make it look good... what sorcery is this?!

those thighs and torso is something else, being able to integrate system so smoothly is pretty noicee

Yet another fantastic MOC MrBoltTron. The MOC is very well shaped and well detailed.

Absolutely excellent. The purples and blues work nicely together, and I’m happy to see someone use the actual Vo-Toa colour scheme for a Vo-Toa.

I can’t say I agree, this is one of (if not the) best female moc I’ve ever seen, you can tell it’s female by her general shaping not massive 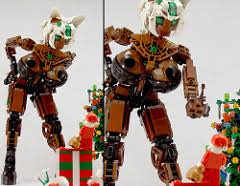