Elemental Lord Connection to their Region

The current canon states that each region is sustained by its respective Elemental Lord. The Matoran can tap into elemental powers due to their access to the surrounding elementally charged land.

Taking this concept further could explain more aspects, like the layout of the island as a whole. Each region is a separate biome. These regions can have drastically different environments while still being in close proximity to each other. For example, Mangai and Ihu are stated to be separated by only a volcano and its rocky terrain. Yet the two regions are polar opposites, with the fire and ice remaining untouched by the neighboring biome. This is all thanks to the elemental energy flowing through the land from the Elemental Lords. It basically makes a sort of elemental force field to maintain the distinct biome.

So, if an Elemental Lord was killed, what would happen?

Next, the Matoran lose their connection to their elemental powers. This will not be instantaneous. Each Matoran has a reserve of elemental energy that they tap into, with the more skilled Matoran having larger reserves. After prolonged use of their elemental powers, they get tired and must rest to refill these reserves. Their bodies take in elemental energy from the surrounding land to refuel them. However, if the region lost its power source, the Matoran recharging would only serve to deplete the remaining biome energy faster. And once it is gone, the Matoran would no longer have anything to refuel themselves. They would then become powerless.

This drying up of a biome would likely lead to the region becoming completely overtaken by its neighbors. The Matoran of the region would either evolve to tap into the neighboring biome’s element, or they would die off due to the separation from their original element.

Here is a possible layout of each region with the potential effects an Elemental Lord dying. 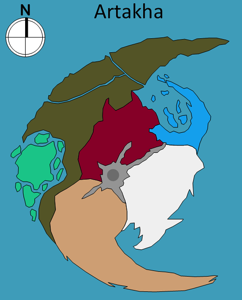