Toa eljay was walking on BZP nui when makuta mesonak came along. Makuta meso spread the darkness of makuta fest on BZP nui. Toa eljay came up to him “THIS HAS TO STOP!” MAkuta meso clubed him in the head. Eljay passsed out.

“What is happening?” Eljay could only see whit. He sat up and looked around. “Wow my noggin took a nokkin” he started to feel hopelss. "I cant go back and fight meso. Then he saw him. Shrek was walking towards him. “Shrek what are you doing here it is a bionicle story?” Shrek looked him in the eye and said “Why not i am life you know” Eljay accepted it. Shrek kneelt down and eljay obidiantly sat on his knee. “YOu must go back” shrek said. “Ok” Eljay said. “Go now my child” shrek said.

Eljay awoke. MAkuta meso was standing over hima nd laffing! he took his cannon and shot makuta meso in the head! “I WIN”! HE YELLED!

BIONICLE sets in hand, Eljay sat by the window and his room and looked at the faint reflection of himself in the glass. He then started to cry, and he proceeded to wipe the tears in his eyes. The crying then turned into large sobs, as Eljay thought about how he had no friends. In his head everyone on TTV laughed at him as he sat there crying, because they all knew he had no friends and it was rightfully so for them to do it.

One day, Toa Eljay was wandering the outskirts of Mango Koro. Suddenly, Makuta Meso landed next to him, and threw a punch! Toa Eljay blocked it with his Kanohi of Mangosteens. He then turned the Makuta into a Giant Mangosteen, and then had a party with the Time Travelling Muaka. The end.

Eljay lied down in his bed, crying. He felt a warmth come towards him. It was Shrek. Eljay was so happy. Shrek told Eljay: “This is my swa-”

Eljay swung through the mangosteen trees. The winds of his father blew in his face. Eljay landed with a thud in front of Toa Lewa, Master of Jungle.

“Father!” He cried, as he hugged Lewa.

“Eljay…”, Lewa said as he looked off to the beach. A tarakava was suntanning. “It’s time”.

Eljay and Lewa jumped onto a Gukko and bite it really hard. It was actually made of Mangosteen. They ate it till it was nothing.

The trees whistled in the distance. The drums of Le Koro sounded. The army of Candlehead Mesonak has returned. Eljay jumped onto Lewa’s back who then used his mask of levitation to catapult him self well beyond the treeline. Lewa switched to his Akaku and saw the dark army approaching.

Candlehead launched activated his time traveling Muaka units. The robo-beasts pounced into the jungle as they headed for the Mango Koro.

“Eljay,” Lewa whispered, “You have to do this yourself”.

“Yes father, I will.” sobbed Eljay into Lewa’s back.

Eljay let go and fell back into the jungle. He grabbed a passing vine and swung straight into the canister on the beach. He activated it and ate a mangosteen as he did. He looked to his left. A portrait of Alena, Toa of Cats, sat on his desk.

“I’m leaving everything behind,” whispered to the picture, “But soon we’ll be together again, with the rest of our team… on Omega Nui!”

The canister leaves the beach into the ocean. Around the island 5 other canisters leave. The journey of their life begins…

One day, Eljay was reviewing some bionicle set until something it his back yard
and there he found a real life size Toa Canister.
He went out side to see the Canister and tuck it and fell into a portal.

He later found himself in the Bionicle Universe with a Toa stone in his hand.
When he got up and look into the water and can see that he became a Toa.
But it was not just a Toa, no normal Toa.
Eljay jumped up the yell.

One day, eljay walks into the store. Five minutes later, while looking at mangosteen he’s shot, and his mask falls off. He’s then transported into mata nui for judgement (Why mata nui? cause can and it’s his happy place). By who? well, Ackar of course! Fifty years after bionicle stars’ story, Ackar became the king and took over the planet, enslaving all the toa. How? the story demanded it)

But, secretly, Tuma has been gathering a resistance, and bursts through the door of the throne room, the one with Eljay and Ackar, and the door flies, hits Ackar in the face, and kills him. Eljay proclaims his gratitude, but Tuma stabs and kills him yelling “TUMA FEST FOREVER!” as eljay fades from consciousness…

Eljay then wakes from his dream and creates a TTV twitch. for the rest of his life, he streamed Tuma fest everyday, while playing Call of Duty: Ghosts in the background…

@pikminjake
Wow… i always new they were all cannibals…

Eljay woke up, threw out all his Bionicles and got a life.

Eljay woke up, threw out all his Bionicles and got a life.

I know this is fanfiction, but even still that’s really unrealistic

It was believable up until the “got a life” part.

I mean, recap reviews is just an excuse for him to get all the Bionicle sets.

As someone who knows LJ fairly well, I can safely say that the gets a life part is far less believable. =p

I can assure everyone when I say MT does not know me very well.

This has been an Eljay PSA. Thank you.

I have a fairly good idea of who has licked you within the past year, and that’s more than I know about most of my friends. 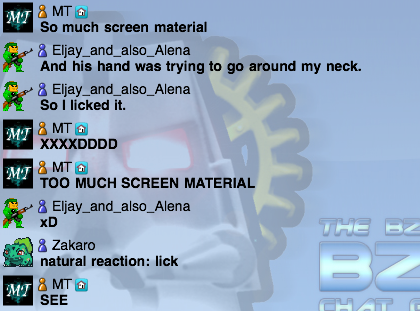 Shots getting fired up in this thread

Eljay wears a mask on his face,
He doesn’t keep his sets in a case,
When BIONICLE died,
Eljay broke down and cried,
When Hero Factory took its place.

There be feels in this poem.

Best poem ever. And I’d say that even if I didn’t have a Zamor sphere launcher pointed at my head.

Eljay woke in the middle of the night his cardboard mask still on his face
dripping with sweat, he was breathing heavily his heart racing like a roborider.
Eljay looked at the side of his bed and found nothing, not surprising considering
Eljays luck with woman. Eljay kept staring at the walls of his room crying beneath
his mask. Eljay looked at his nightstand there lied a picture of Eljays parents;
Omega Tahu and Lewa. Today was the 5th anniversary of when he lost his parts forever.
The story goes like this… In the kingdom of bionicle is was said in 2010 there
would be an end, and that’s how it was. Hero Factory had begun an invasion of the
bionicle kingdom, mere days before Eljay was to “jump up the yell” and become king.
But like Eljays luck with woman there was no happy endings, Eljays parent had to send
Eljay to live with his uncle Meso to keep him safe, in the hopes one day Eljay would become
the hero they needed. Unfortunately Elajy got sidetracked trying to finish biocraft
and never fulfilled his destiny. The End.