E’loc is my Role Play character for Beyond Botana RPG on MOCpages. 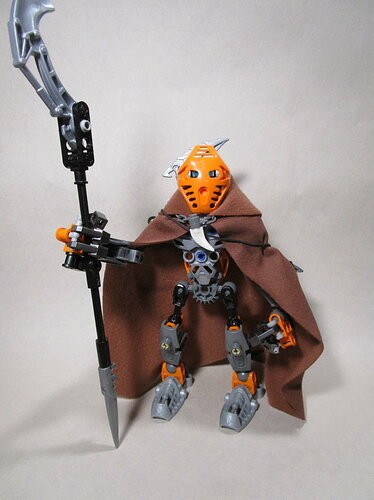 Equipment: His trusty spear, a tooth from a creature named Goliath Archaeoavis, and The Captain’s Crossbow.

Personality: Brave, usually quiet, a skilled warrior, always ready for a fight (even during peacetime), and occasionally aggressive. He’s also very protective of his friends.

Age: 20 (in the RP, Agori had the same lifespan as humans)

Backstory: Mere weeks before the call to arms against the Tar, E’loc was hired by an enterprising Agori to explore an island north of Botana, to see if the island could sustain a settlement. Unfortunately for E’loc, a few hours after setting sail, his ship was caught in a sudden, brutal storm that blew his ship of course, causing him to get shipwrecked near Elysium. E’loc, now stranded, was forced to take odd jobs to afford the repairs of his ship. While on one of those jobs, E’loc overheard some merchants talking about a band of Agori traveling to the Iron Citidel. Interested, E’loc set out to see these Agori for himself.

When he arrived, E’loc saw the Agori battling a giant, centapede-like creature, named Goliath Archaeoavis. E’loc jumped into the brawl, even managing to land the finishing blow to the beast.

E’loc used his spear to pry a tooth out of Goliath Archaeoavis’ mouth, to serve as a trophy. In addition to the tooth, E’loc recived a crossbow from Avary Horthwell, captain of The Iron Cavalry, Fourteenth Legion.

Now, E’loc continues with the band of Agori to help find a cure for the Tar… 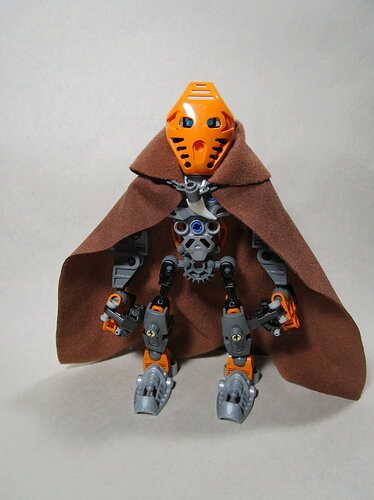 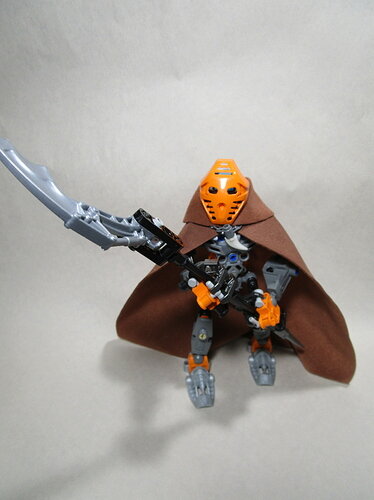 Here’s E’loc with his spear. I recently got some Visorak pieces, and I wanted to use one of the pincers as the curved-edge of the spear. 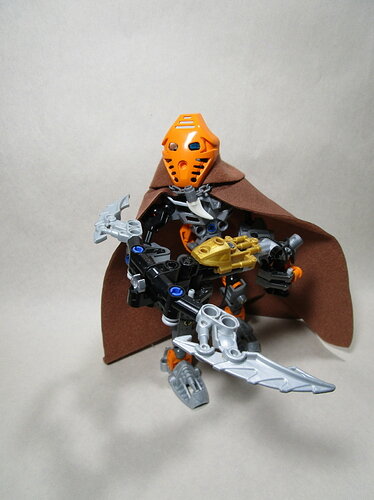 Here’s The Captain’s Crossbow. I would’ve liked to add more gold, but I didn’t have enough pieces for that. Here’s the description of the relic:

“Relic: Captain’s Crossbow
Owner: E’Loc
Ability: consumes 1 CHG, applies enemy with burning (BRN). Burning does 2 additional damage every turn, for 10 turns.
Lore: A gilded crossbow owned by the Captain of the Fourteenth Legion, armed by a spring-loaded mechanism. It’s pristine condition indicates that it has been seldom used, or that its former owner treated it with particular care. It fires oiled bolts, which ignite as they pass a striker at the tip of the bow.” 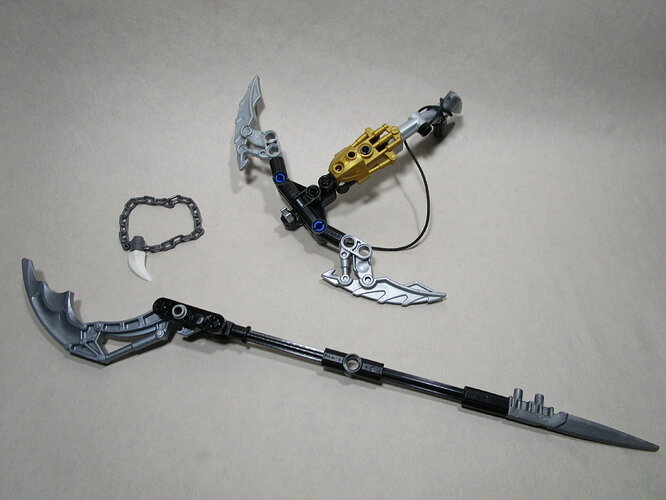 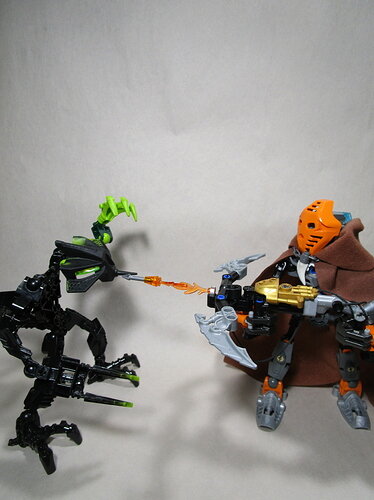 Here’s E’loc firing a flaming bolt at a Tar-infected Agori.

Eyyy!
I recognize him. Nice job! I love the crossbow. and his mask stands out too. Very nice!

Thanks! I’m quite satisfied with how the crossbow turned out.

That crossbow is awesome! I think you could add some tires to the upper legs, but this is a great MOC!

Thanks! I’ll see what I can do about adding tires to the legs.

Thanks! It seems everyone likes the crossbow

This is awesome. Especially the weapons. And your picture quality is great too.

I wonder if the upper legs aren’t 1L short though? It seems like the arms are just a bit too long in proportion to the legs.

Thanks! The arms are the same length as the legs, but extending his legs would increase flexibility (which he doesn’t currently have).

I love this new version. I think changing the thighs to the standard CCBS bones that are used on the old HF 2.0 builds would give this moc more articulation and less skeletal legs. Great work!

changing the thighs to the standard CCBS bones

That Gorast moc thing is sick. I wish I had the pieces to make one of those. Actually though nice cape/cloak. I love putting those on mocs but they’re a pain to make.

The creature that looks like Gorast is actually an Agori that was infected by a virus called The Tar (part of a RP on MOCpages), and the cloak is from the Obi-Wan Kenobi CCBS figure.

Personally, I think the weapons are the best part!