On this thread I will post Bionicle MOCs I make. The biggest picture took almost a day and a half to render.

Looks good until the torso is seen. Mistika shields are abit difficult to use on mocs, you should've gone with a more Hero factory-ish build

For a CCBS MOC, this is incredibly good. I really enjoy the look of it. I'm not sure of the left hand though, although the launcher on the right arm.

@TheJMPofArcadia I personally like the torso's look and think it also makes it more unique.
@Ekorak The orinal picture before cropping was 3000x3000 (bad choice

). Yeah, the hands look a bit odly placed but I wanted posing hands and my other ideas where even worse looking. Thanks for the encouragement.

Thanks for the encourage ment.

This is pretty epic. That epic mask/face though, it's so beautiful... Seriously though the gun is so creative, the sword is so epic and the legs! Well maybe he could use bigger feet. Another thing I'd change is the fact that his arms are half way down his body. I don't know, may be hard to change but yeah.

That's cool! I like the spike-y feel of it, although I think it could be better represented on the legs as well.
-Oonie

For a CCBS MOC, this is incredibly good.

For a CCBS MOC

I don't have anything against the system.

I just find most people do practically nothing with MOCs made entirely out of it.

This mysterious figure once plotted in a cave by a volcano on Okoto and was waiting till the skull spiders and villagers wear each other down so he could come out and easily conquer both. Those plans were ruined when the Toa arrived and tipped the balance of power in the fight. The Hidden One now moves on to his second plan for conquering the island- finding the mask of control. He is armed with a fire sword, two claws, and a weapon that fires super-heated balls of lava which he will use all of, if he needs to, to complete his goals.

Feel; free to give feedback.

Not as good as the first, but still really creative! =D

I was going for a more original build and more visible detail but I just can't top that head of the first.

Here is anothe entry I made for the "BFGM", this one being smaller than my past two... but only slightly less dangerous.

Bio-
This ruthless mercenary is a self aware robot built by an unknown inventor. His overall goal is always the current goal of his inventor for him but beyond that he chooses his own targets to capture or eliminate.

It is highly skilled at stealth but when he gets close enough to his target to pursue its bright red color scheme strikes fear into his targets, for they know it will never stop until it has stopped its target.

It has its own built in exo suit that gives its arms incredible strength, enough to bend open think metal doors. Its feet have extra traction on the back and shock absorbing mechanics on the toes. It has two knives in holsters on the back of its legs. For its primary weapons it usually caries two swords or a disk launcher with an attached blade.

Feel free to give feedback. 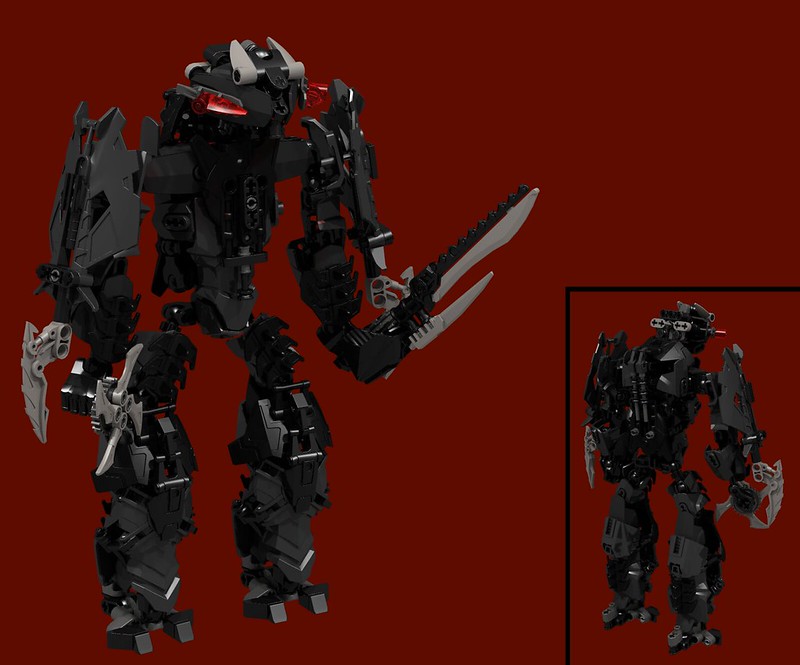 Any thoughts or critiques?

END I am so sorry.
Much black, could use a different color scheme but that's just me.

I'm much better at admiring MOCs the I am at critiquing them.

Um…maybe his upper legs are a little scrawny?

The upper legs look a bit odd, especially the way they're posed. They're also a lot smaller than the lower legs. And what's the TECHNIC doing on the outside of his breastplate?