Greetings. I am back

Looking for feedback and ideas, so feel free to comment n stuff and I might update the artwork…

Mangaian Politician:1: After the recent attacks from the Fire lizards, we can not stand against them for much longer, our forces are being tied down and their numbers seem to have no end. We must do something!

Picture 2
Mangaian politician 2: we cannot do anything any forces taken from the city defences would spell certain doom for our cities… I suggest that we stay alert and keeps our
patrols watch out.

Panel: 4
Namoto: look at those guys… all big talk but no gears…
Jaller: They are bound by their own conviction that each of them are right… and the Royal house cannot decree anything unless the courtl is in agreement.

Panel 5
We cannot even do- where are you going?

Panel 6
Namoto: Just getting some Excersice.

Panel 7:
Namoto goes to barracks and takes the best matoran with him on a special mission.
Believing the prince has the courts blessing they follow him on his plan.

Panel 8:
After having rallied the soldiers he brings them to the cave of the Fire lizards.
And they capture the resting lizards off guard and totally kick their tails across the cave as the Matorans has prepared and is under Namotos leadership.

Panel 12
The court is not impressed as a city has been badly devastated as the lizards fleet from their old home across the mangai region, and they push the blame the reason on Namoto as he took the “response team” away. obviously using him as a scapegoat.

Panel 13
Namoto leaving the city. Looking back at his former home
Sad music plays in the background

Panel 14
Devoid of pourpse Namoto reaches the elemental shrine of Mangai the Alter of - fire god here- He asks for guidance. wondering how he may ever redeem himself, saying he would do anything-

Panel 15
A strong flame Envelops him and he is shown a vision of what is to come not understanding
aka the classical vision of clips from the future episodes.

Panel 16
Namoto rises as a Toa in an epic cliffhanger for next episode.
looking dramatically at the camera. 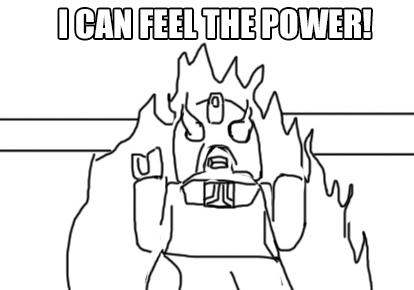 Panel 15
A strong flame Envelops him and he is shown a vision of what is to come not understanding
aka the classical vision of clips from the future episodes.

Adding that one to the Script XD