You know all those Vahki heads? I always felt it was a waste that only one major G1 species used them, and even then only in black (yeah yeah krekka and TSO, but those characters both having their own separate entire species might as well not even be a thing). So I decided some time ago to make a custom race out of them. But of course a Vahki head with a proper jaw will always just looks like a Vortixx. So instead, they’re an offshoot race of Vortixx and a rightful excuse to make them in more than one color. Erzal here is like the third or fourth one in. Heightwise they’re not exactly as tall as set Roodaka, but they’re pretty close and meant to still maintain about a head and a half over a standard Inika build. Oh, and yes he’s spraypainted. Everything I build is. 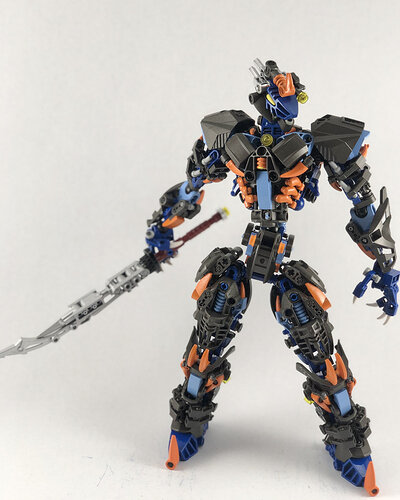 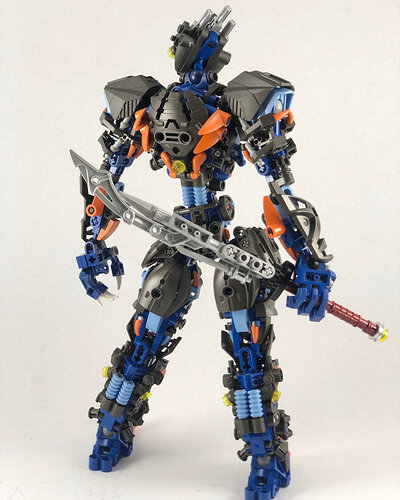 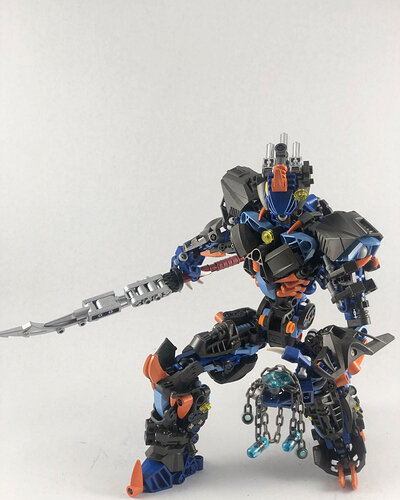 Bio: Like all Zanites, Erzal began life as a standard Vortixx. Born on Xia, Erzal was never formally inducted into the rigid caste structure of the old world but instead worked proudly as part of a freelance class of specialists unbound to any one Matriarch clan. His engineering prowess earned him entrance into an established crafting association patroned by, among others, multiple powerful Xian clans. The precious stability enjoyed during this period of Erzal’s life was destroyed during a particularly violent and prolongued civil conflict on Xia instigated by the botched assassination of the Leading Matriarch of the time. The clan wars inevitably embroiled Erzal’s guild in inescapable intrigue as each former patron clan grew suspicious of the association’s services to the others, and those closest to Erzal became forced to turn on each other. Erzal emerged from this conflict alive but disillusioned and in time sought out the renegade Vortixx exiles in the far southern islands, the transformed followers of a deceased spiritual leader named Zanyin, and who themselves were mockingly called “Zanites”.

Erzal keeps ferociously private about the years between the clan wars and his introduction to Zanite society, but at some point he admits to a mysterious interaction with what he would later understand as the Zanite concept of the Soulcry - the melody of existence. This is received with some skepticism from fellow Zanites who believe that physical transformation is first required to hear one’s Soulcry, but most are content to leave it as a matter of interpretation. What is certain is that it seemed to leave its mark on Erzal, who grew increasingly obsessed with its nature. Erzal proved himself quick to the blade and to mastering the Zanite powers of their spiritual construct, the Avichron. His battlefield distinction would earn him great acclaim, but his proud nature could sometimes veer on arrogance and his combat prowess could lend itself to bloodlust. While violence was integral to Zanite life, it was held in strict neutrality and Erzal’s flirtation with its unfettered enjoyment drew uncomfortable parallels with prior cautionary tales of Zanites losing themselves to the Soulcry, but also favor with some of the veteran elite.

In the third century after the Reformation of Spherus Magna, Erzal would be chosen to serve in a new Ordimat team under the command of a former Lieutenant Matriach from Xia named Nerix. Secretly however he served as a spy to a faction of Zanite leadership suspicious of the new commander and her prior ties to the old clans. This would later cause numerous inner conflicts during the team’s first extended mission in the eastern Ouscurii Plains to investigate the reemergence of Energized Protodermis, and his final betrayal would be a factor in a barely averted war among the nomadic Glatorian tribes there. Ultimately, his loyalty would be revealed to lie outside both his Ordimat commander and the other Zanite leaders, and his true motivations would remain mysterious for long until after it was too late. The only clue would lie in his first encounter centuries earlier with the Soulcry…

Nothin wrong with that. The Build is awesome, and the makuta armor on the lower forearms just fits so well. The cation is also super well done. The way you blended the different blade pieces into one cohesive weapon is masterful. Excellent job!

Thanks dude~
I figured I’d put it out there before someone asks why they haven’t seen this part in that color.

I like it a lot, it’s a really clean and sleek build.