Like my Nemesis Prime in Evergreen/Cyberverse take, I made onw take of a Evergreen/Cyberverse version of a Pre-Beast Tarantulas in the Transmetal colors, a very good backstory is that he was the pupil of Shockwave back on Cybertron leans about science, and other stuff when Megatron rose to power he fellow Shockwave to become a Decepticon, but only do minor work between in the Decepticon Science Division and Decepticon Justice Division until he went mad with a top secret be hide Decepticon doors as he created the Matrix of Darkness which leaded into Nemesis Prime before the DJD try to get to him he fled along with a crew to Eukaris to hide as a purple tarantula, a black/gold black widow spider, a green/yellow wasp, & a red/green Pteranodon. 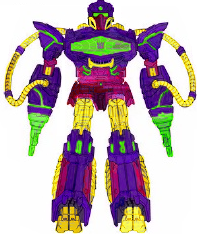