Faber Files: "Sketches from Turaga Beach - Tribute to the Fans" 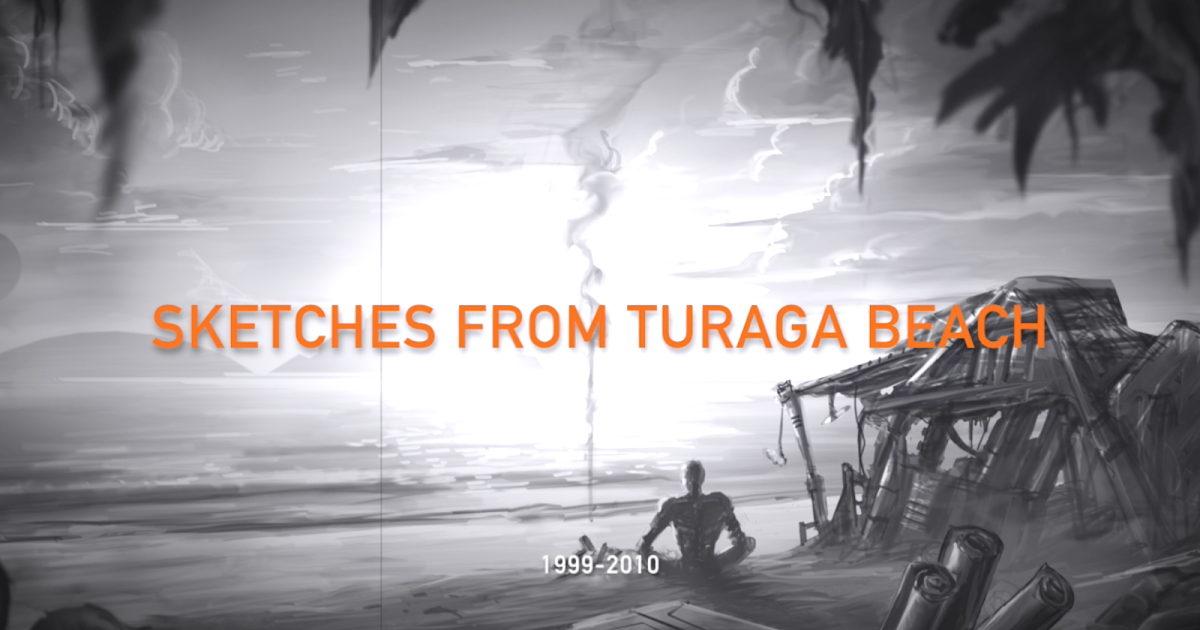 Sketches from Turaga Beach - Tribute to the fans

Dear longtime fans of a certain biological chronicle. This video is an attempt to do a Turaga Beach tribute to the real heroes of this stor...

New heartfelt Faber Files blog post and video, the latter of which features early BIONICLE sketches, teaser posters, and a cool unreleased version of Cryoshell’s “Closer to the Truth”.

"Dear longtime fans of a certain biological chronicle. This video is an attempt to do a Turaga Beach tribute to the real heroes of this story and that is all the fans who joined and build the adventure through all those years. Your imagination and creativity is what it has been about since the beginning. I’ve used all the early sketches and teaser posters to support this unreleased version of an old #Cryoshell tune.

The sketches show how fragile the idea was at the beginning.
I came upon an early mix of ‘Closer to the truth’ and for some reason it fits really nicely. It has a melancholic and fragile tone that is broken up by raw guitar riffs. The text also has some of the good references to the ending of G2 and then there is the alternative ending that has a nice ‘Kick’ to it.

Now everybody is Turaga and it is time to move on from the beach wether you sail out or move inland to find new stories, pause a while, turn your head and look behind you a last time before you leave. You have everything you need in your memories and all the fuel you need in your imagination to go on new adventures. Go, go, go I’ll see you on another beach someday."

UPDATE: Original video has been taken down for undisclosed reasons. The video it was replaced with is lacking all of the sketches and imagery from the previous upload.

I have listend to the song and read the lyrics… And with that knowledge, i can’t help but feel that he was talking about a negative refrence towards G2:

Don’t you see?
We’re meant to be
The prodigies that came to show the way

Suddenly
It’s hard to breathe
Resting in the trenches, won’t you say?

I mean… I can’t really see a possitive refrence to G2 in this text, which makes me think he chose it as a “take that” towards G2. 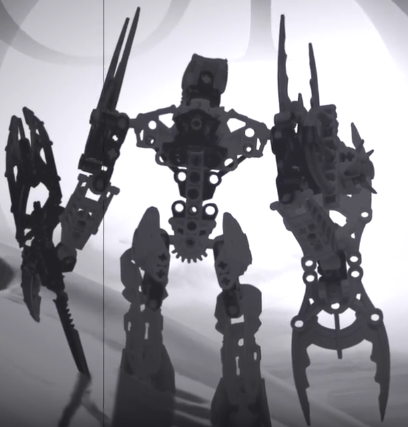 The cool thing is, that image of Mata Nui was actually used in one of the 2009 Lego Club Magazines (I think Jan/Feb) on a map of Bara Magna.

I know but it’s nice to have a full somewhat clean shot of the image.

Also, those concept names that could’ve been: “Zeekers Seekers”, “Seek Heads”, “Who Heads”, “Slam Heads”, “Machine Seeds” (ridiculous yet exotic)…and whatever these names were supposed to be 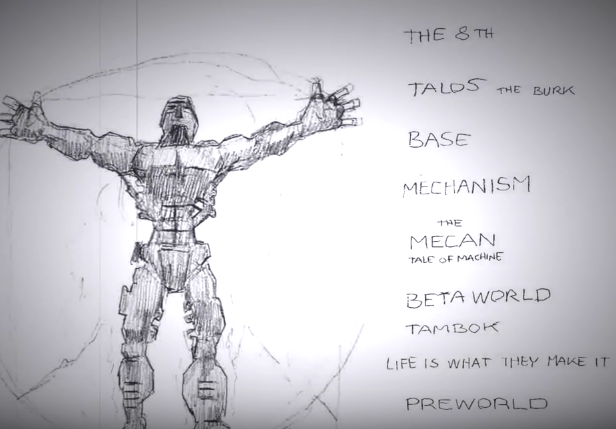 “the MECAN tale of machine” sounds like a movie title

Also “Life is what they make it” is a reference to the great beings?

This is motivating me to make Hutere’s Turaga form… 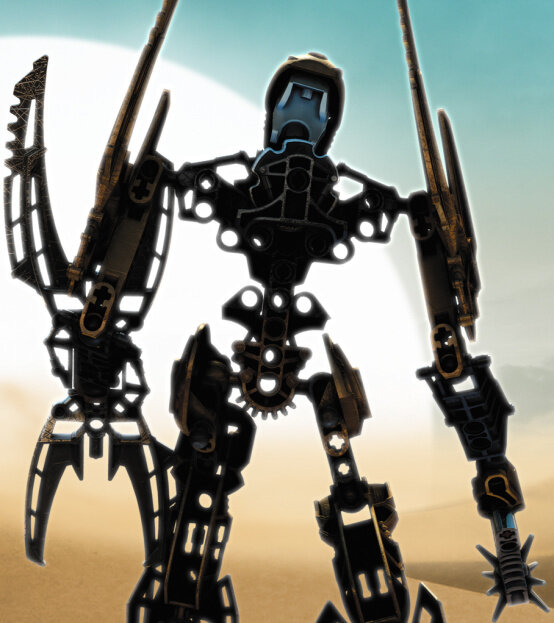 So the video was taken down and reuploaded by Faber… except almost all of the sketches aren’t there anymore, with the thumbnail being the only image throughout the entirety of the video except for two at the end. Think maybe he ran into trouble with Lego higher ups? Whatever happened, this was unfortunate, especially since he was one of the main minds behind creating Bionicle and its world.

Oh well at least we have a nice version of Closer to the Truth, I guess (though I still prefer the version on their album, which is actually one of my favourite Cryoshell songs).

You know, this is probably just my rampant conspanoia working in overdrive, but it’s starting to feel like Lego isn’t content to just cancel Bionicle, but is also actively trying to erase it from history. Almost like they’re embarrassed and/or ashamed of its mere existence.

That is almost assuredly not what’s happening, but it sure is starting to feel like it.

Thanks for mentioning this; I’ve edited the original post accordingly.

It’s a real shame, honestly; but I had a little foresight and downloaded the video to my PC (for personal use, not public distribution).

That is almost assuredly not what’s happening, but it sure is starting to feel like it.

Yeah, I doubt that’s the case (at least, not to the extreme) - but it certainly feels like it at this point.

I will note that some of the sketches from the previous video weren’t by Faber. The concept art of Axe, Claw, etc. the predecessors to the Toa were actually by Jan Kjaer.

Well, i’m pretty sure like 95% of the concept art in the vid, was and still is floating around in the interwebs in some form, whether it be in brickshelf galleries, biomediaproject, vk.com/Bionicle and whatnot, so unless illuminati Lego destroys those too, they basically didn’t erase anything

Also I think there’s a better reason why…

Like I said in my comment, my completely baseless speculation is almost certainly untrue. It’s just that it feels as if Lego has been actively trying to downplay Bionicle’s impact ever since the line ended in 2010, and even more so now. Though I completely understand why, Lego’s a business and they have to push the new product.

Maybe I’m just bitter because outside of the forums I had to deal with some particularly obnoxious System AFOLs who were less than pleasant about expressing their opinions about Bionicle being canceled again. For the sake of pleasantness and not derailing the thread, I won’t repeat anything they said.

Luckily I actually foresaw this coming and I saved the video :P. It strange that Faber was hit by something like this twice in a row now…

A bit late at this point, but a week ago when the replacement video went up, Faber made some comments below it regarding the original. 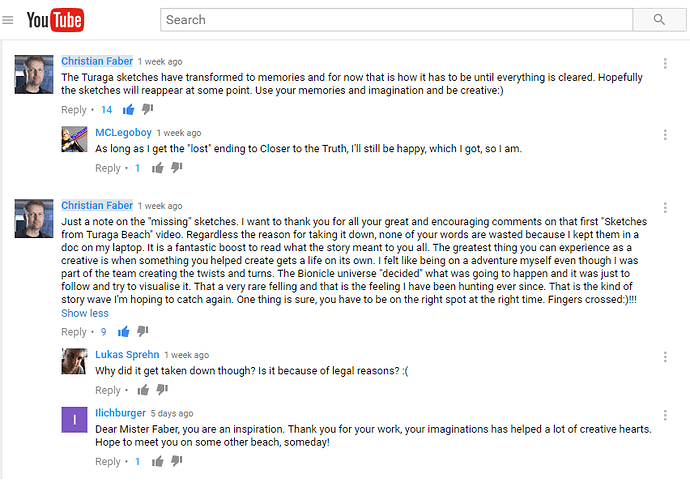 Would anyone who has the original video downloaded consider sharing the file?

Would anyone who has the original video downloaded consider sharing the file?

Looking at the comments, some guy uploaded it publicly to Dropbox. Should be there.

Faber is at it again…his work and dedication is honestly too great to go unnoticed, he should be put in charge of the Bionicle facebook page considering that PR doesn’t care enough to fulfill their promise of constant updates. 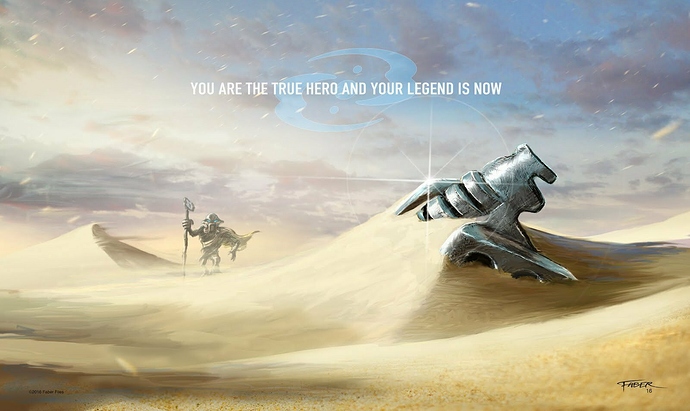 BTW Is that turaga supposed to be his “self-moc”?

BTW Is that turaga supposed to be his “self-moc”?

The piece was done specifically for the Bionifigs 10th anniversary. Their mascot is Turaga Dume, so that’s supposed to be him there. The design does share similarities with the figures Faber has drawn with the whole “Turaga Beach” thing, though.