DISCLAIMER: I SWEAR THIS ISN’T A TUYET BUILD! 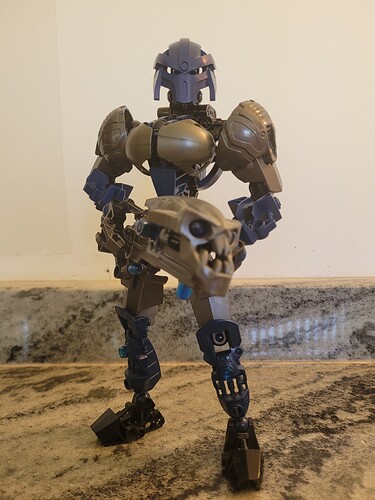 Farin, Toa M’Kuu of Water. Much like the Ga-Matoran of Yerma-Magna, she typically kept to the Grotto that housed Ga-Yerma deep under Mt. Ånga’s shores. It was Farin that founded the Tropical Volcano Island, having swam the vast distance between it and the Granite Bay within minutes. 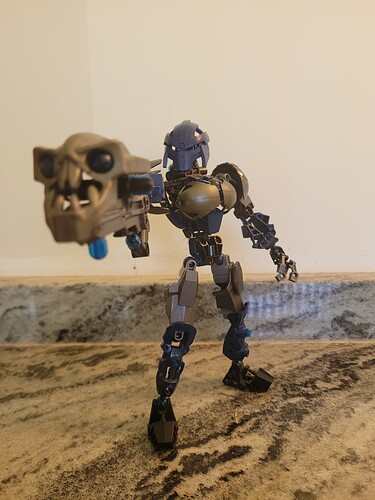 Typical to Toa of Water, Farin was a mediator, or more likely an intimidating force that would quell the “boys” of the team. Many a threat to knock Toa-Noggins together had been made. Nevertheless, she was only outplayed in strength by Toa Ferrum (who she had jokingly claimed cheated with his Pakari). 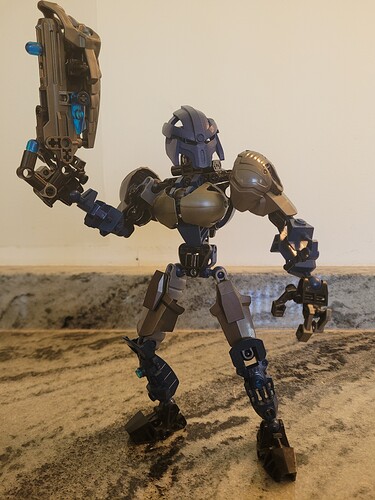 The combination of her Great Kanohi Mask of Intangibility (Special thanks again to Galva_Nize) and her natural Element of Water allowed her a unique ability to completely dissolve if she was submerged. Much like a Takea Shark attack, by the time she made her presence known, it was way too late. Deep in the depths, she fashioned a Water Slug-Thrower in the shape of a sawed-off Shotgun.
…[Aquatic DOOM Music Intensifies] 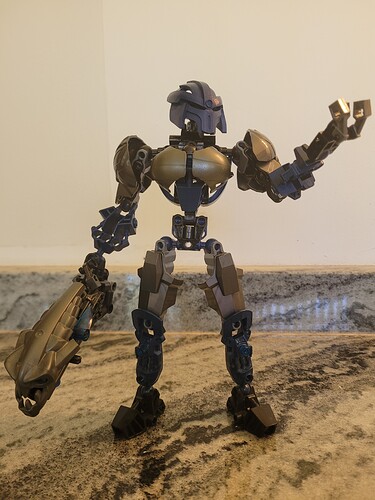 Okay, so to address the Toa-Sized Elephant in the room, Farin is NOT a Tuyet Clone yanked via a poorly used Kanohi Olmak.

very cool - this could be a tuyet tho if u wanted to enter it, the bewbs are also a little off but not as bad as some others i have seen
nice work!

I love the idea for that gun, wand while the torso build is neat, it seems like it could be a little longer, and a little more filled out in the hip/waist area.

I was expecting your Toa of Water to be a lot more brightly colored, but this looks pretty good as well! That weapon design is nice.

Nope. The Ga-Matoran of Yerma-Magna are more reclusive than their MU cousins because they live within a aquifer/grotto thing. Artistic Liberties [Hand-Waves]. Toa Maris, if you ever saw her back on MOCPages had the same color-scheme. There’s a fair bit of skeleton use in their designs as well.

Ah that makes sense. It still looks good though

I’ve never been a fan of that torso build, it’s much too small to pull off Nuvaboobs for (aside from the Mata foot in the chest being pretty weird shaping.) Like the overall figure though, gives me Samus vibes, and gun design is cool.

the Nuva armour seems a little too big for a figure of this size, but i actually rather like this.

That second picture is just staring right through my soul… =P

The muted colors work, I think, though aren’t maybe as eye-catching as some of your other Toa. She looks pretty good, though. Does the Water Slug-Thrower actually throw slugs in-story? ‘Cause throwin’ slugs is awesome. =P

Not Sea-Slugs lol. I’m an engineer by trade so when I say slug it’s more like when a large chunk of water goes through an air-bound pump. Think like a Pistol Shrimp but it’s a shotgun blast.

Shoot. I was hoping for a high-powered Squid Launcher for Sea Slugs. Oh well. =P

Sorry to… erm… burst your bubble.