In my original Guntoa storyline, I had a rahkshi headed assassin-for-hire character named Faytalis working for the main villains of the series.

I figure why not try to bring him back in the new series, with a completely new look? 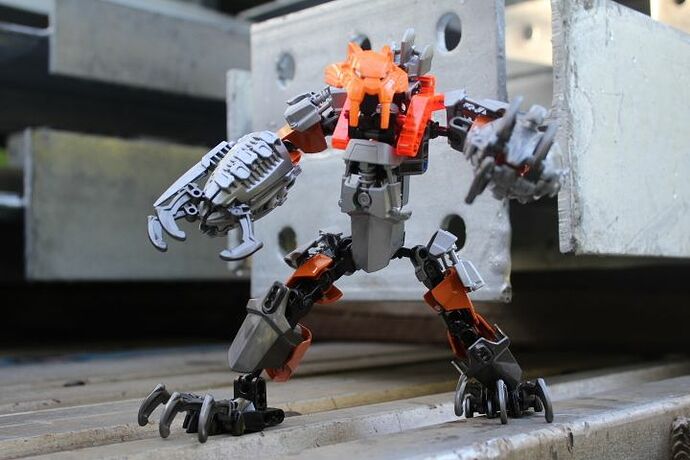 Fatalis (2).JPG720×480 193 KB
lis-
This version I picture as being a cyborg assassin and corps leader, being mostly machine, with only his brain and a few vital organs remain of his original body.
Very few know his original human identity, and of his obsession with immortality that turned him into the mechanical marauder he is now.
He works for a private military company called SKARR, an organisation that relies more on cyborgs and drones than they do flesh and blood soldiers.
He is ofttimes placed in the lead of squadrons of SKARR’s drones, or sent off alone to dispatch a target by himself.
Unofficially SKARR and GUNTRON are at war with each other, the clients they end up backing usually hire one to go against the other and visa versa.

The orange on the head does not work well with the burnt orange or the trans orange.

I think this dude is really cool- good choice of hand design. I really need to build a moc with hands like that!

Orange and neon red are placed only in the middle, meaning colourscheme is preety badly organised.

His GIGACLAWS does not seem like something such slim caracter would be able to pick up (watching you too, Gali)

Overall its preety simple moc, but there is some stuff you could improove (also he looks more like an mercenary, than an assassin)

Thanks for all the feedback. He is kind of a quick build, mainly something to use the Gigaclaws.
I might redesign him…with a customized Nex 3.0 mask.

In the story universe I’m developing for this guy and my GUN.T.O.A. build, the organisations they work for are basically mercenary groups, working for local governments or the United Nations.

I like his over all appearance he looks this cyborg wolf man.