Hey Guys! I did a quick search on the message boards and couldn't find a topic like this one, so I felt free to make it!

So, It's a safe bet that some of us here like to do either campaigns of D&D or online game stuff with our buddies. During these sessions, funny things can be said and moment had that we will never forget. And sometimes they can be even funnier out of context. Here is a place where we can post a few choice lines that we or our friends have said, and you can decide for yourself whether or not to provide context. Allow me to provide a few from my exploits with my friends:

"THE HOUSE HAS DAMAGE REDUCTION!!!"-"I wonder if it's alive?"

"Hey, these guys are murdering y- Oh no, wait you're invincible."

"I'm not going to tell you the name of this spell until after I cast it on you."

And here's a back and forth between the Fighter and the Druid:
"They fired on us with catapults when we did not have a wall to protect us! That is the worst warcrime that can be committed!"

Druid raises hand "I put water in all of their treasure chests."

"That is the second worst warcrime that can be committed!"

And now here's an actual story behind the Fighter character that my friend was playing. He was named Mtathis, and was supposed to be the party's guardian, but never put any skill points into perception and thus, never noticed when we were in danger. One time, we were storming the lair of an evil cult, and the DM was lamenting how we just charged in and was expecting one of us to die. Mtathis's Player (ever the optimist) said "That's not true, we might all escape with one point of health!" There were four of us, split up into two groups. Myself (Bard) and the Rogue could easily slip out the front entrance, but the Fighter and the Mech-using Kobold were in the thick of the danger with nothing but a magic McGuffin Teleportation Whistle to get them out of danger, but they had to get another McGuffin before any of us could leave.

They grabbed the second McGuffin, and warped out.
The Kobold was at quarter health.
The Rogue and me were at about a third health
Mtathis had 1 point of health remaining.

From that point on, we all wished each other "The Luck of Mtathis!" a character who could never sense danger, but could also get out of a fight with one health point left.

Now it's time for you to share your funny quotes and stories! 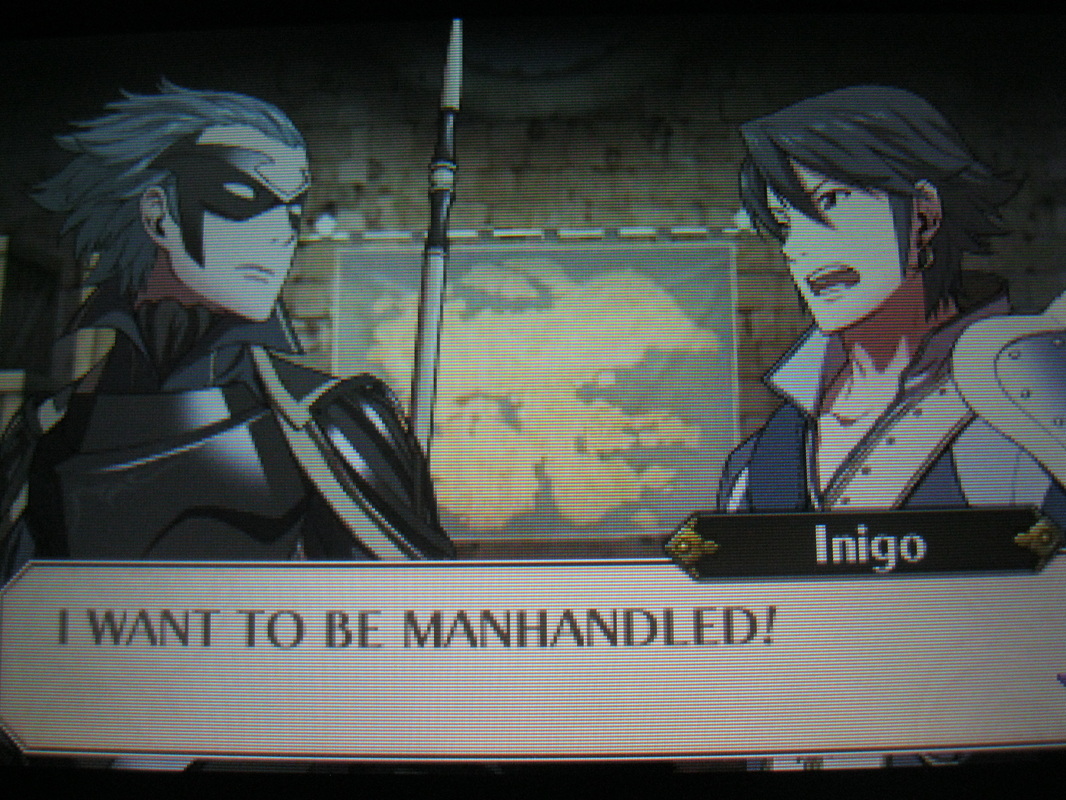 "All your base are belong to us."

This is more for things that your or your friends have said to each other during a gaming session, please and thank you.

I once participated in a pseudo-game of D&D. The GM started the game by saying, "You wake up in a pile of legs. What do you do?"

Some of us tried "swimming" out, some of us bit the legs, but the first successful person to get out actually stroked the inner thigh and the leg helped pull them out. It then became their pet.

We then went out, got attacked by lava monsters, found a hippie van full of weed, gave the weed to the monsters, and never got to finish the game.

BTW, our characters were a Mandalorian Warrior without his armor, Captain America, a giant sloth, and Pedo-Panda.

These are from a real life D&D session with my friends, including @Calebmar12, who actually said "If you help me I'll give you the hat"...

"I want to pin the dragon" - excerpt from the story of masked luchador Los Tiburon.

"you tried to open a door with a missile, what did you expect to happen"

A boy runs out and yells to stop fighting the guards. They agree. i look to my companion we nod heads and cut his arms off i eat his heart and burn the village.

I attack with Riftwing Cloudskate at Nicol Bolas, killing him and allowing me to draw a card off of Kothophed.

I activate Soulfire Grand Master's ability, then cast Blasphemous Act to kill everything and gain 260 life (because this is Commander). But while Blasphemous Act us on the stack, I activate Soul of New Phyrexia's ability to give my permanents indestructible until end of turn. I win if I don't take a lot of damage before my next upkeep because I control a Felidar Sovereign.

@Lobstroke 'wait whats in these barrels of black sluge'
Me DM 'oh um thats were they put the dead babies?'

Then something about a bath tub with lobster legs

I feel like @Scorpion_Strike would have a field day here

Genasi Monk: "Let's teach the Kobolds the principles of micro- and macroeconomics."

There's a wonderful blog: http://outofcontextdnd.tumblr.com, to which people can submit all sorts of weird and wonderful quotes from various roleplaying games. These are some of the favorites that I can remember:

DM: "You hear that all too familiar song, and immediately recognize the war song of the orcs. The last notes of Wonderwall play before the horde advances."

PC with thick Russian accent: “Hello! I hear you sell rat poison. I have rat problem. Do you have poison for 6 foot tall, 180 pound rat?”

Racist Taldor Cavalier explaining ‘Elven Ancestry’ to the party’s Elf: “Well, look at it this way: Elves and squirrels share three distinct traits. One: both creatures traditionally live in heavily forested areas up in trees, two: both subsist largely on a diet of nuts and berries, and three: worst of all, both have pointed ears.”

Story time: "The patrons are looking towards us and the bartender asks: "why did you bring weapons in here?" We replied: "Mimics." We laughed, they laughed, and the table laughed. We killed the table. Good times."

The Rogue to the Fighter: “Maybe you should use your +8 to athletics for something other than jumping to conclusions”

DM to the party fighting a giant snake: "It's already prone, guys!"

At the end of a Feudal Japan themed campaign: "My velociraptor goes off to found its own kingdom."

Underdark politics: “It says a lot that, of all the groups in this dungeon, I think the Satan-worshipping orcs are the most trustworthy.”

DM after the Half-Orc suggested using a town's indoor plumbing for vodka distribution: "The Dwarves, in the drunkest of stupors, elect you their queen and erect a statue of you pouring alcohol into the Town Square toilet."

Concerning the Warlock's pet: "Did you bring the eternally screaming goat?"

Party character recap: “So we have a memory wiped Anubis, Thor with a hammer that causes sex changes and turns things into beavers, a powerless Eldritch abomination, the Doctor whom hears all of our voices, and a chef who may or may not be Superman.”

Gnewton, Gnoll physicist: “Every Standard Action has an equal and opposite Free Action.”

Fighter logic: "Well, a wise man once told me that your greatest enemy is yourself. I knocked myself out by walking into a tree once, which means I have already defeated my greatest enemy. That Dragon should be a piece of cake by comparison."

Bard with plans: “Okay, a 43 to disguise myself as a raven, a 39 on Stealth to sneak up on them, and a 42 on Bluff to convince me to accept them as one of their own.”

This is probably my favorite

"Hello my loyal subjects! A new regime has began! The loyal shall be rewarded while the disloyal shall be purged! Bow to show your allegiance!"

Just found this topic; we’ve got a few we’ve archived.

Our dwarf ranger to our warforged guy “hey, can I, like, sell you?”

Warforged guy stops and rips ranger off his horse.

“Everything that’s sentient that I’ve met needs to eat. Except you. And other kinds of you.” - me to our warforged

Our dwarf ranger falls into a trap.

Me to said ranger: “why weren’t you checking for traps? That could’ve been someone important.”

“So you want to give a plushie of the tyrant king to the son of the guy who helped take him down?”

“Do you want the reasons alphabetically or chronologically?”

Player: “I’m pitching a tent outside the warforged guy’s house.”

Player: “I’m pitching a tent regardless.”

DM: “okay, so you pitch a tent outside your own house…”

“Nothing was illegal… I think.”

“It’s like an air conditioner, but for warm instead of cold.”
“You know there’s a name for that, right?”