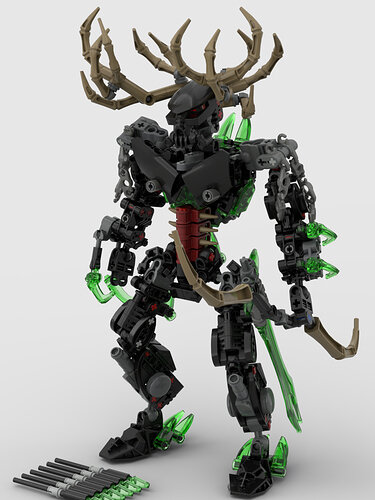 A little while ago I figured out a G1-styled version of Umarak as a member of the Brotherhood of Makuta responsible for the island of Okoto, which is presumably one of the ones in the southeastern peninsula or somewhere; I feel like a G1 version of the island would have ta-, po-, onu-, ga-, ko-, and plantlife matoran, all collectively led by Turaga Ekimu, a Turaga of Iron and maskmaker who wears ornate armour and travels the island on an oversized version of Agil (in this universe a creature similar to Nivawk) and is responsible for a Toa Okoto, named for the 6 elemental creatures from G2 and aesthetically similar to the Mata (for obvious reasons).

If stud.io had the shadow trap pieces, he would of course have one on each shoulder-- if I ever get around to picking up his parts, that’s what I intend to do. The only real detail not visible here is a quiver on his right shoulder made from a zamor sphere holder for his six arrows.

Makuta Umarak spends most of his life away from his ostensible territory, hunting Toa teams for sport: he only ever carries six arrows, one for each member of his target team, and is more reliant on his Makuta powers in combat than many of his brothers. He wears a Kanohi Shelek, the Mask of Silence. Often the only warning a Toa has of their impending downfall is the sudden absence of ambient noise before a protosteel-tipped arrow strikes them in the chest.

would turaga ekimu and makuta be “brothers” still? Could this be explaied by the fact that toa in teams call each other brothers and sisters, and this carries over to turaga as well, and makuta, having taken the form of a turaga (dume) before, might be considered a brother to a fellow turaga?

That fellow turaga being ekimu?

Huh. I hadn’t considered that, but sure, I guess.

Alternatively Toa Ekimu was formerly the leader of Umarak’s Toa Hagah team and the two became close friends-- right up until Ekimu sacrificed his powers and became a Turaga to create a new generation of Toa to protect his home island once the treachery of the Brotherhood became clear.

Are you trying to reconcile the two canons of g1 and g2, or is this just putting recent characters in the old world?

Oh, just throwing the general concept of Okoto into the G1 universe-- same way that the transformers franchise occasionally pulls settings, concepts and characters from other continuities and integrates them into its own G1.

Ok then, my terrible theory wouldn’t fit in anyway, sorry!

nah, 's all good-- it’s a neat theory outside of this v specific continuity concept.

i’m surprised nobody has thought of this until now, it’s just such a good MOC, and the hydraxon mask just works so well.