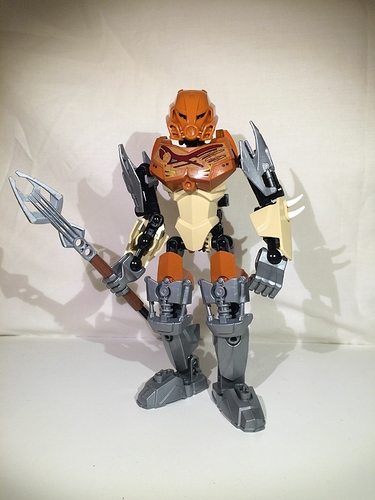 It’s clear from his generic and odd-looking G2 incarnations that Pohatu was just the obligatory sixth Toa that LEGO had to bring back for the sake of tradition. 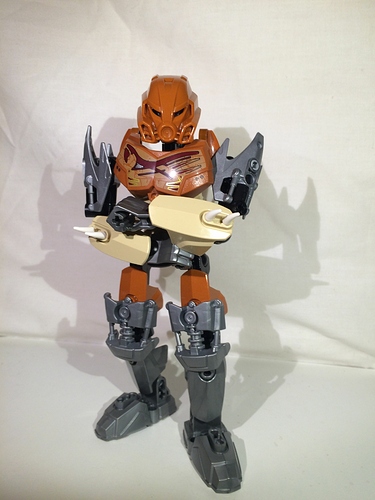 That’s why I decided to redesign G2 Pohatu to make up for this, taking inspiration from both his G1 and G2 forms (except '08 - let’s not go there). 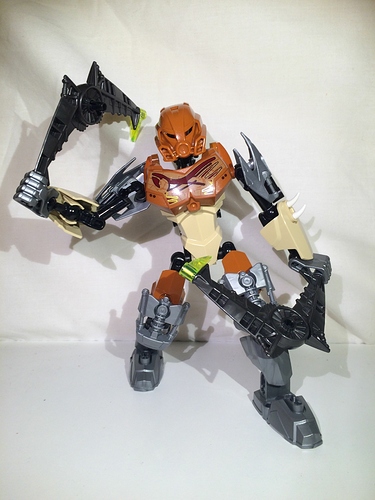 There are at least some redeeming qualities about his new forms, namely the burnt orange, mask designs, barbaric features, etc. I’ve aimed to retain these while removing the weird or generic aspects. 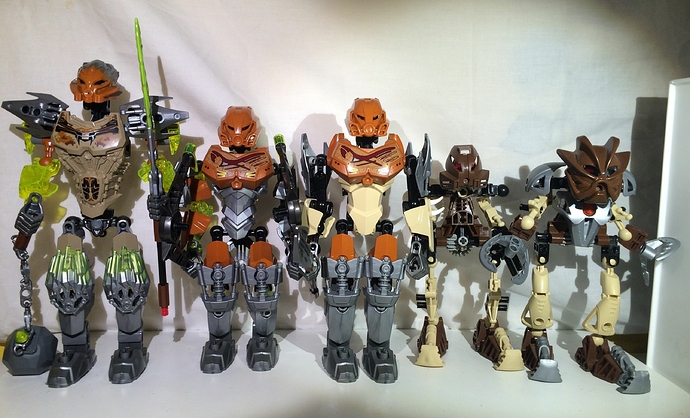 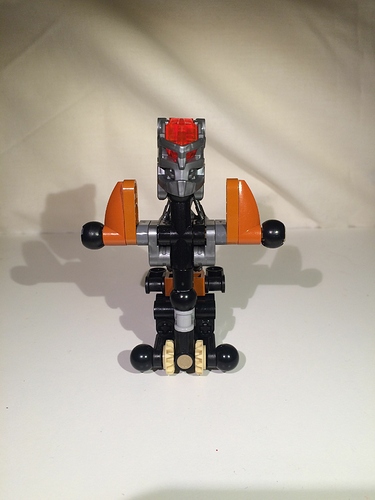 Pohatu’s new torso is custom-built, and includes a unity piece for combining with he who must not be named. 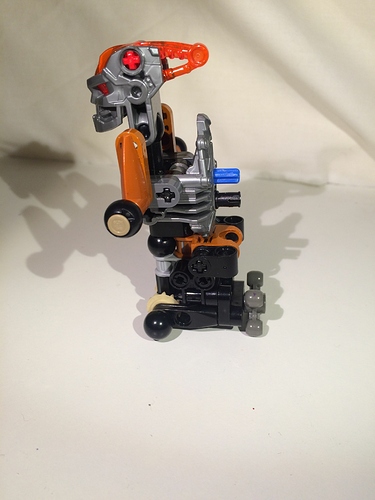 Some limitations of the torso shell and the gearbox piece mean that I had to build the gearbox facing backwards - if this was an official set, I’d imagine new parts could be made to overcome this. 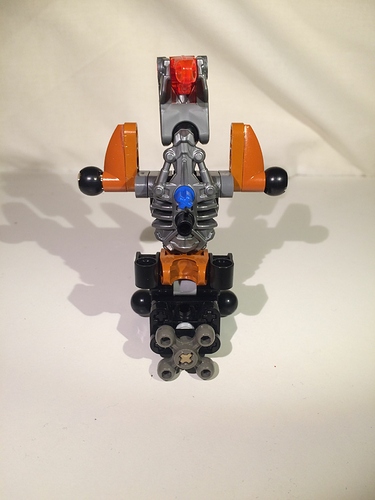 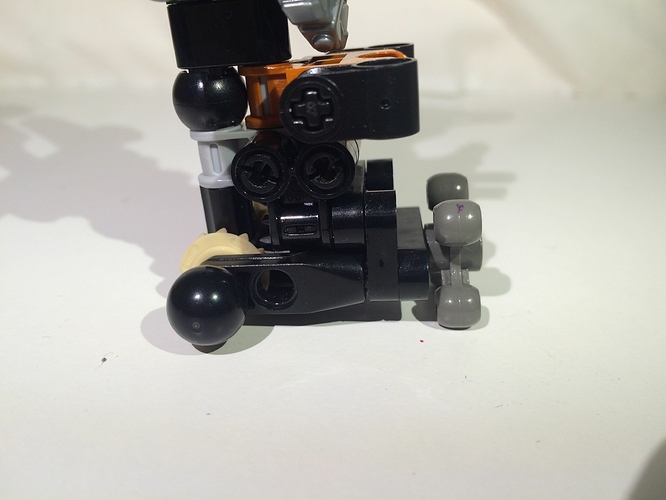 Turning the cog causes Pohatu’s legs to swing, allowing him to run. This would have been a pretty good design choice to keep in G2. 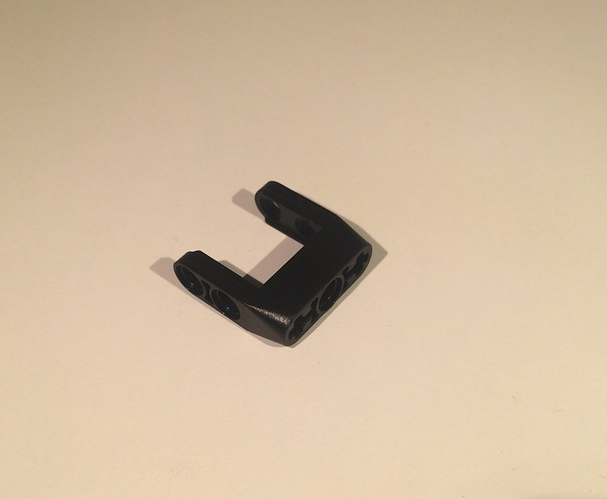 Adding friction to the gears was proving to be too time-consuming with the limitations of the gearbox piece, as well as the flimsy nature of the 1/2 gears used to build it. 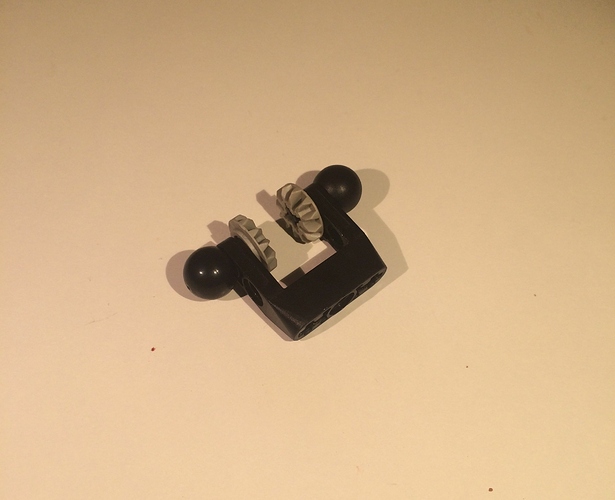 This means the legs are a bit wobbly, and the 1/2 axles make Pohatu’s legs prone to falling off on occasion. Again, this could be avoided with new molds. 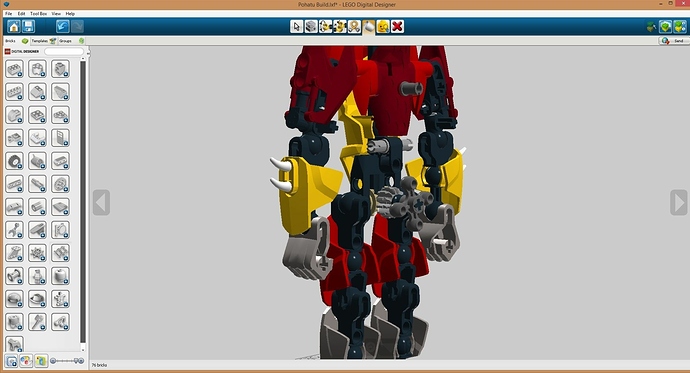 Here’s how the gearbox was intended to be positioned. The torso shell and the gearbox piece prevented sturdy attachment of the gearbox to the torso in this orientation, so I had to make do with the bulkier design. 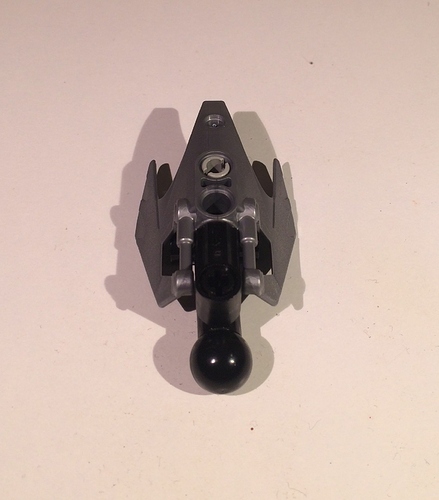 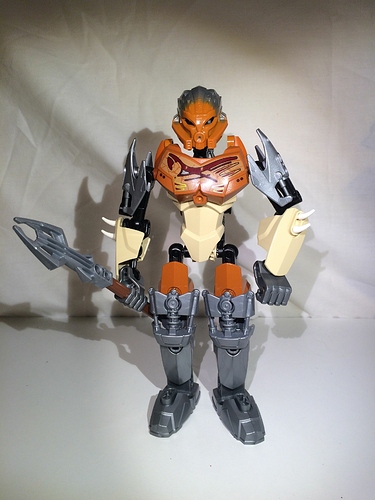 Here’s Pohatu with his 2016 mask. Personally, I prefer the 2015 version with this design since the 2016 mask looks too slim for the build. 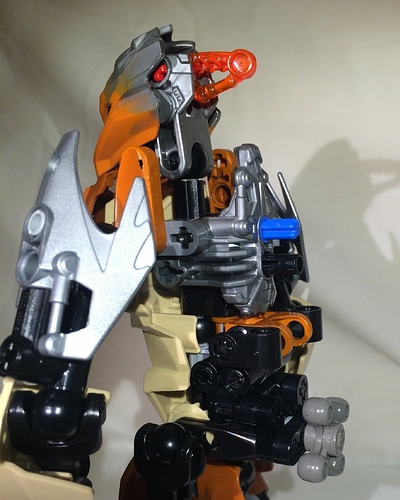 Excuse me a minute while I go get Ketar… 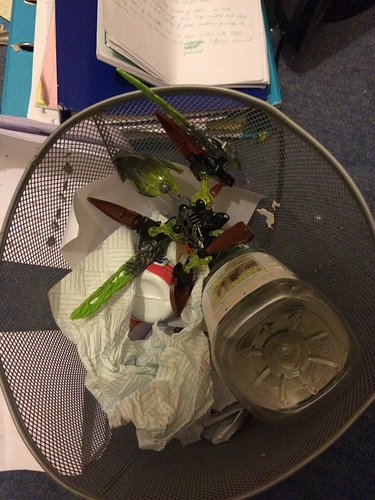 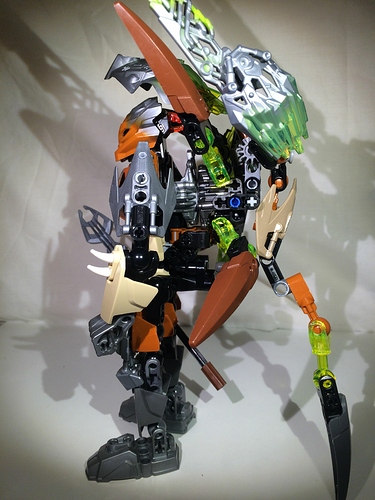 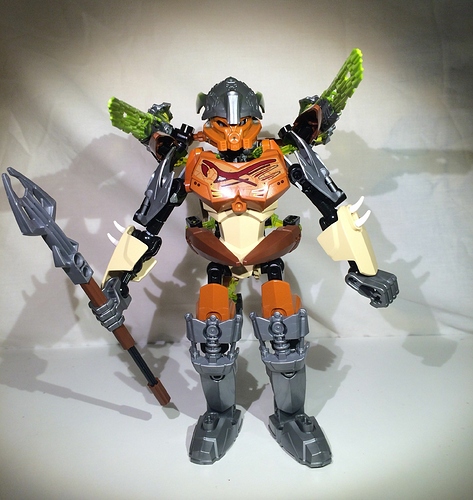 Thanks for viewing. Be sure to leave your thoughts on my design in the comments.
And don’t forget to keep scrolling down for information on my next main project.

Here’s a few more images to cover things that didn’t fit anywhere else: 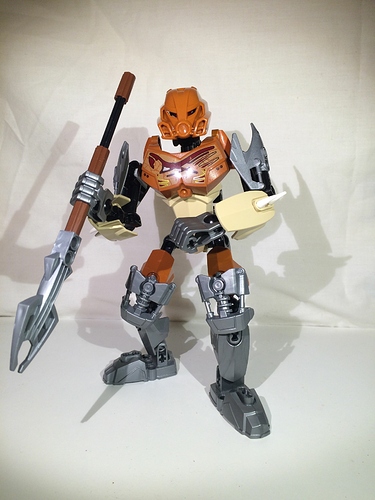 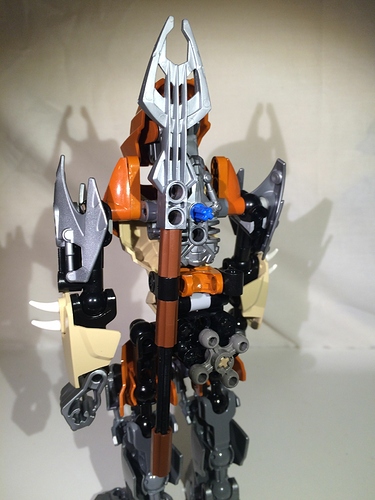 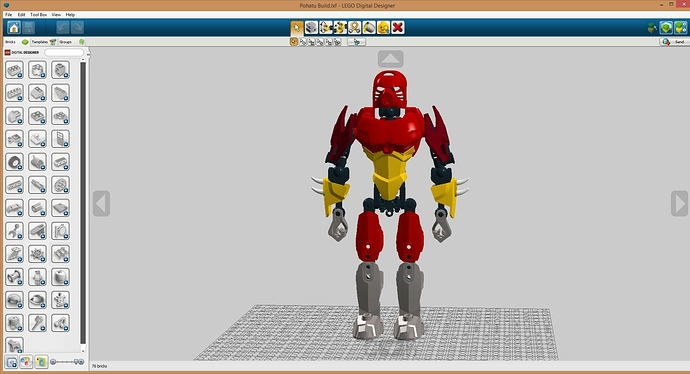 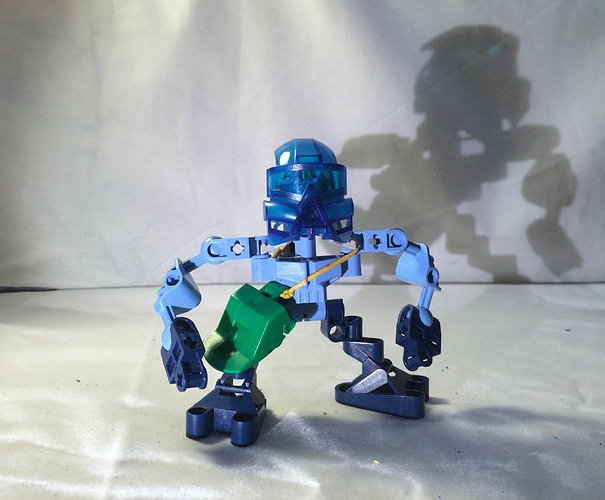 For those of you that know me from the Toa Project, you might remember that I teased my next big project on the final review post. Rest assured that the MNOG Project is still in the works, and is now far more ambitious than when last you heard about it.

For everyone else, behold:

Over the next few months, I’ll be releasing every single named Matoran from both Mata Nui Online Games in set form, complete with items and props based on those found and used by the Matoran of Mata Nui.

ETA: I have no idea.

Simplistic but nice. The running mechanism reminds me of the one I’m currently working on, all that’s missing is the lock.

Boy we got some problems
/mt

This is a really solid MoC. The lack of trans neon-green is a bit jarring, however, considering this is a fusion of G1 and G2.

The running mechanism reminds me of a mechanism I made and posted here.
Anyway, it’s not exactly the Pohatu I envisioned but it’s entirely subjective.

There’s some interesting complexity here, but it’s largely hidden by the chest armor.

The sets are less generic than this, and 2015 actually looks better.
Tan clashes against the burnt orange,
Limbs are weirdly lanky,
Leg gearbox is pointless and annoying other than to appease nostalgia,
Orange eyes blend into the burnt orange mask.

Getting Ketar out of the trash though. LOL. XD

Excuse me a minute while I go get Ketar…

Poor Ketar. He never gets any love.

Tan doesn’t really work with him and the color scheme is kinda boring without the neon green. And the way his lower arms are setup he doesn’t give me that wastelander feel anymore, and that weapon is kinda boring you should have just kept the stormarangs or use his 2016 blade in some way. But the internals are pretty nicely complex this is good!

It’s clear from his generic and odd-looking G2 incarnations that Pohatu was just the obligatory sixth Toa that LEGO had to bring back for the sake of tradition.

I beg to differ, a lot. He may not have as much put into him build-wise, but he’s not there just to complete the set.

Also, I’d wager to say this is more generic than the set versions because LEGO had the audacity to go for asymmetry in 2015 and a completely different color scheme in 2016. This throws tan into the color scheme, which clashes a lot, just because the other ones had it, which is pretty boring, and it’s symmetrical.

Now, don’t get me wrong, this is wonderfully made, and it’s your preference so I don’t mind how it looks, I just don’t agree with your reasoning.

Not a big fan of the tan.

Though I think he looks kinda generic. All that really tells me that this is G2 Pohatu is the mask.

He honestly doesn’t look a whole lot different to me.

There have been a lot of pohatu mocs/redesigns recently and this is my favorite one ! Nice job love Colour scheme!!!

Mmm, not a huge fan of the tan… Also, he needs trans lime. Desperately. On a more positive note, I like the leg function, although, would there be a way to make it so that only one leg moved?

Yep. You could just replace one gear with a bush, except there’d be no easy way to implement friction since it’s not linked up to the other gears. You’d have to make the legs wider and / or add some extra parts to keep the ball joint stationary.

The MOC is simple yet amazing at the same time, trough he looks bit generic, I still think he is better interpretation of Pohatu than the 2015 version.

Poor, poor Ketar…He is great set…compared to certain Matoran…not gonna even go there from obvious reasons.

This simply looks decent.
Doesn’t really look like it has changed a lot from the original set. Besides the function and addition of the unity piece.