Stuff you should know first

Hey guys, I’m sorta back to LDD moccing, I’ve been and will continue to be busy with study so don’t expect massive upload spams from me for quite a while, ok so some things about the moc now.

Anyway, enough of the boring stuff, let’s look at this moc… 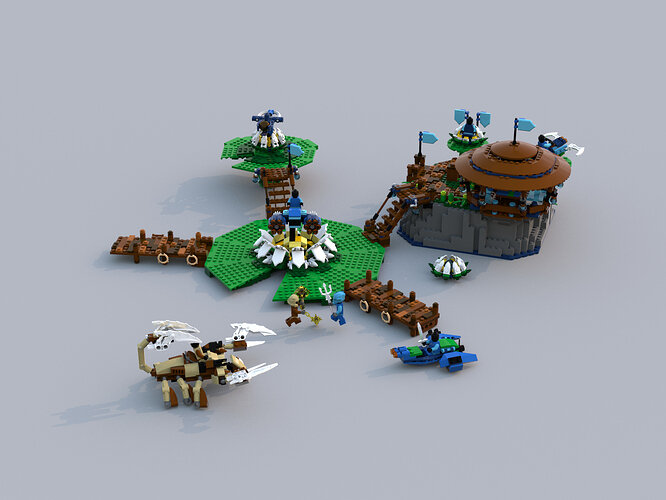 So I wanted to capture a mix of @Oomatu’s city of sails concept and the G1 Ga-koro lilypad design and so I tried mixing them into this, wooden huts and docks built on and connecting land and giant lilypads. I then got this idea to work lilypad flowers into the design because, let’s be real, Lilypads are plain. So I used flower styled designs around the three turrets on this model and around the Turaga’s pedestal (I’ll get to that later). My idea is the flower petals are actually part of the defenses and mechanics but are designed to look natural.

The docks have a mix of detailing and colour use as well as small lamps to break it all up. The hut contains some world buildy playset stuff and the Rahi, Boat and turrets have action packed play features. Whilst the Rahi can shoot 2 stud launchers and has all round possibility it contains no function, the set does however, for the most part, a lot of it is modular. 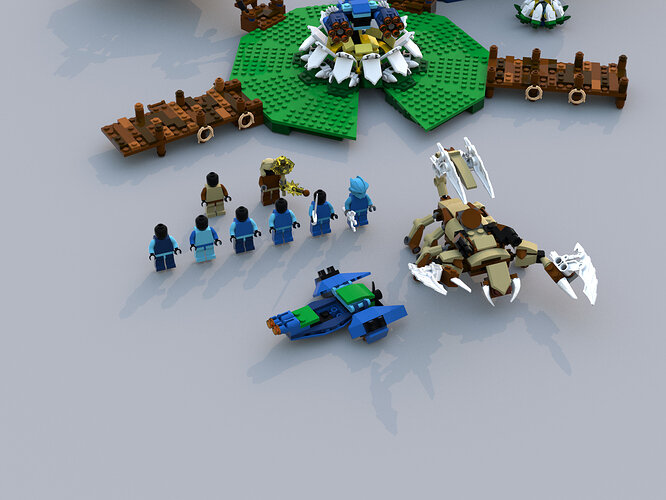 ##The Minifigures
From Naho: 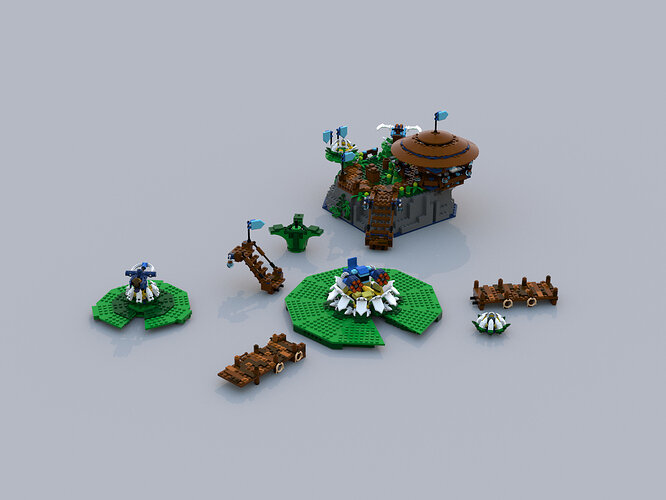 In total this set comes with: 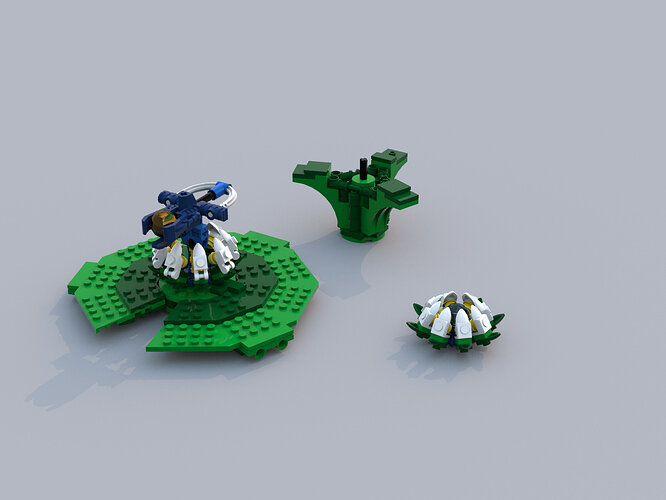 The small lily pad and flower elements, the pad easily attaches and removes from the stand, the flower is free standing. The small pad has 3 points of connection. 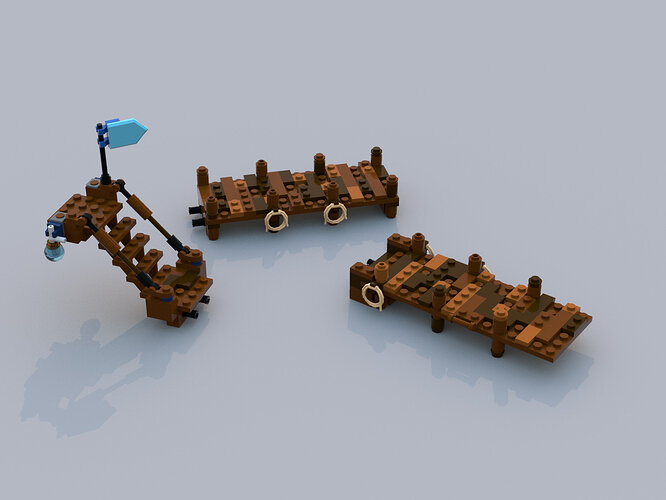 The dock pieces use multiple colours to convey worn dock planks, they have ropes attached to the side, maybe for rigging boats, maybe for saving anyone who falls in etc.
One has a small bar the boat included can attach and dock to. The stairs have small lamps on them to highlight this is a village, full of things you would find in a village. 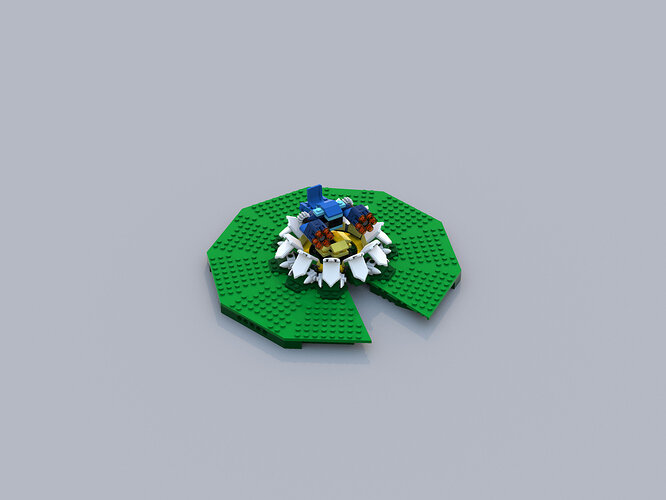 The big pad is mostly plain but features a gun turret with 2 6 stud launchers, with 2 points of articulation to raise it up and on a swivel to move it 360 degrees, you can basically aim it anywhere. I like the idea that the flower is part of the mechanics, not sure how but it would be cool worldbuilding. The large pad has 4 points of connection for other elements. 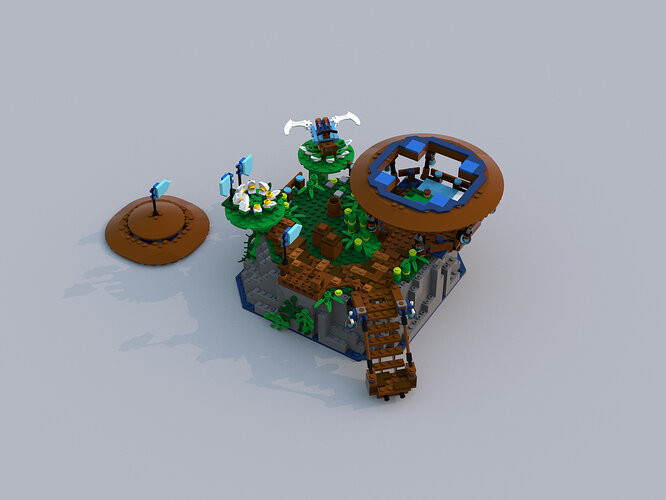 The hut on the island is the last segment, featuring a hut and bed for one Matoran, a map table for planning the defense or attack, a crossbow turret, the Turaga’s pedestal flower and some small storage. There is also an unused connection for future modular Naho stuff I want to do. 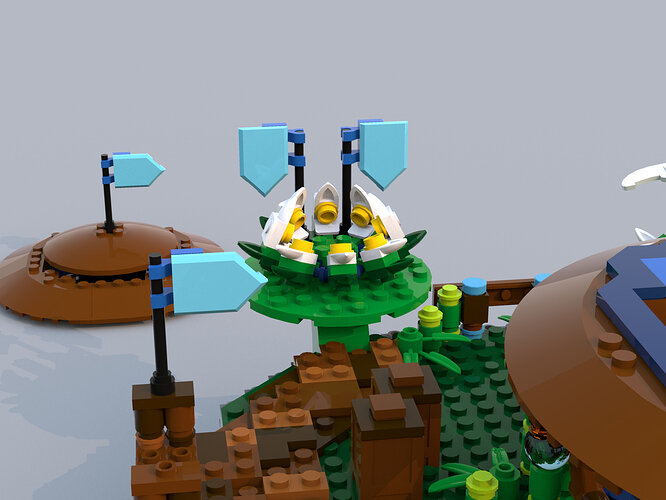 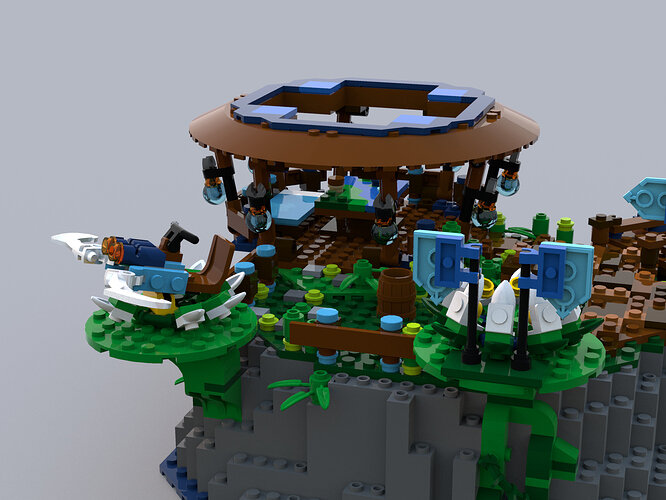 You can see some more detailing in these images, I do plan to expand and do more modular stuff for Naho sets, maybe have the possibility of them all combining into one massive village or town or city.

Here we can see just one possible alternate configuration: 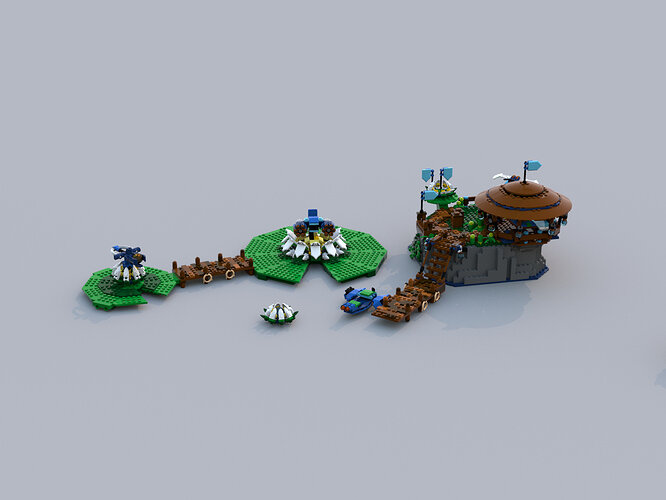 There are by no means just one but I do plan on making more to fit in and add to this so that this can be expanded on.

Comments and criticisms are as always, welcome. If you have any ideas for expansions or smaller sets that could be added to the modular design, be it a theme or a certain building, I’d love to hear it!

This looks cool, the only thing I find a little annoying are the studs that just look the lilypads look cluttered, though fixing it is a little hard. I really like this idea! The flower-mounted turrets look great!

There aren’t any large scale solutions to that problem I’m afraid.

This is awesome, the small island is the best part.

Excellent modular work! Maybe you could attach your own bridge or Sokoda’s pier to it?

I love the building, it reminds me a lot of the stuff on Kashyyk in the original Battlefront. The flowers are also very well-made, the bridges are simple, yet fairly detailed, and the turrets being placed in the flowers all work really well. Pohatu and Gali facing off is a neat touch, and the speedboat is also really good too; it genuinely looks like it would be natural for it to pull up to that pier (that sounds weird, I know)

And of course, the Nui-Jaga. Excuse me while I go and edit the Megathread… In all seriousness, that’s awesome. You’ve pulled the Nui-Jaga off really well and on top of that, given it a different twist via its size to the G1 Nui-Jaga. It’d be neat if there could be an articulating tail though (not necessarily a functioning one).

The Lilypads and the large hut look AWESOME, and the modular nature of the set makes it really feet like something lego would develop. The Nui Jaga is probably the only part I feel needs some re-working

The island is a little plain on the sides but I like it, the house is sort of inspired bu Oomatu’s city of sails artwork on his Ga-Wahi artwork for G3 and I visualized these round structures, not necessarily circular that were very open, skylights, open walls and railing etc.

The flowers are my favourite part, they do a lot to break the set up and make it unique. Now I can see why the Jaga is good and bad, the legs have one point of articulation but it has 2 in the tail, the claws move and it has blasters. So I could change it but then it becomes an issue of piece count and I’d ideally not want to inflate it further.

Reminds me a lot of the Kashyyyk Islands map from the original Star Wars Battlefront. 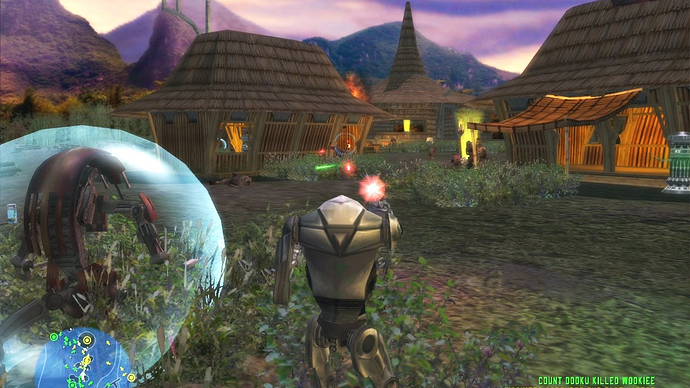 That is the style I was going for.

This is really cool, I love the natural wooden and green aesthetic. Really reminds me of MNOG.

This is one of my favourite sets you did, especially the doc pieces look cool

love it imagine how cool they will look with masks though I have 2 complaints First: theres not enough motarans in it though love the nui jaga second: it should have an armory for when the pilots are not using the guns(this also implies to the nui jaga pilot)

I personally think the mini figure count is perfect, I could really see these guys being a major selling point for Lego, so there should not be too many.

@lordvaldek671 the reason for the low count of Motarans is that they are the attackers, and only a small scouting party at that, you would supplement them with a battle pack like the ones I’ve already designed.

Secondly there is no armoury as this is also meant to have a town-ish vibe to it, not a purely militaristic, which is why most of the turrets are detachable. I’ll be working on this in future after my current project is complete.

@ToaNoah_Wafflemeister Thank you, I thought 8 figs would be ok at the size of this set.

i see the logic in it