Hi, Sokoda here with another G3 Set concept. This time for the region of Kanae: As always: The Masks are added on the renders to get the look of the masks across.
This new Set has 854 pieces (including the 3 masks)

I think this set is a bit different, because it’s more a display set and I focused on showing the landscape of Kanae because some people asked for a more enviorment focused set. 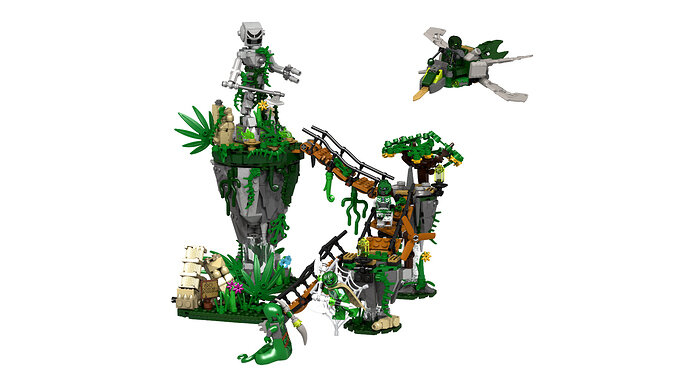 This set contains The “Shrine of Wind” wich is built with three floating islands and some bridges that connect them. The set also includes a mechanic Gukko and a little scenery of Kanaes landscape, that can be added to the Shrine.
The included Minifigures are: Lewa, Lerahk, and two Matoran (one an inventer and an archeologist).

1. The Shrine of Wind 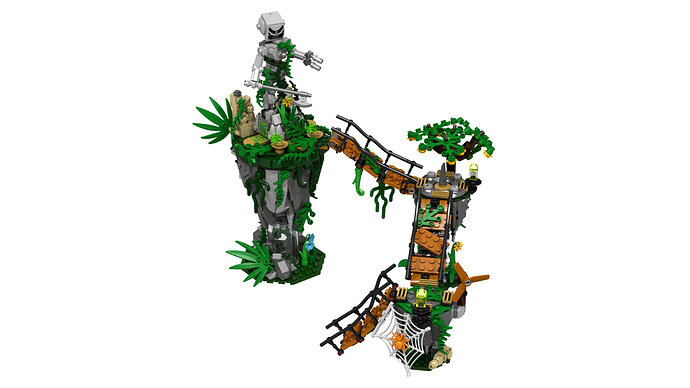 Shrine of Wind 1.jpg1920×1080 290 KB
The Shrine of Wind consists of three floating islands, that lead with bridges to a statue of Lewa. To give the islands a floating look I built them on Transparent pieces. I also tried to make it look likr this Shrine was forgotten for a long time, so I used a lot of plant-pieces and built ruins of an old structure in tan. 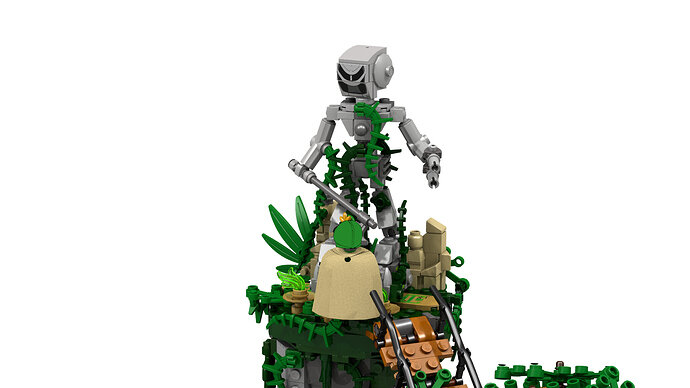 Shrine of Wind 5 mask.jpg1920×1080 263 KB
On the top of the temple there is a statue of Lewa in his G1 Toa Mata version. I tried quite a while to build the Mask, but I chose to do it with printing instead. 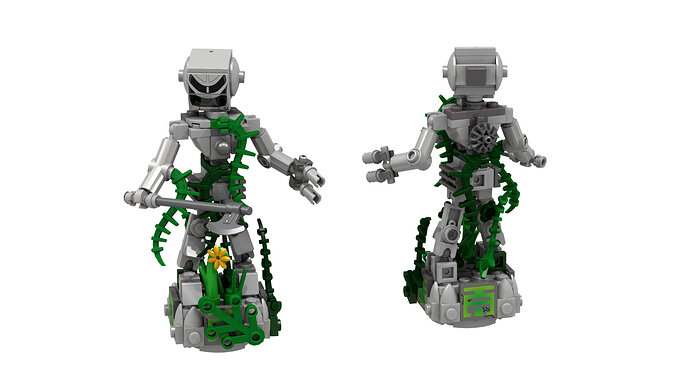 The bridges (the second and third) have a built in function. If you pull a Pin at its end the bridge will fall down 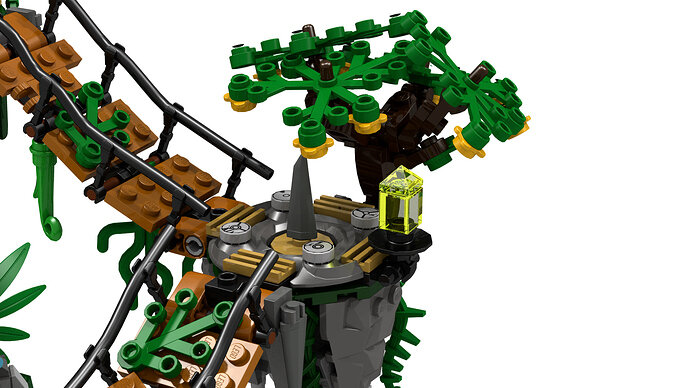 Shrine of Wind 7.jpg1920×1080 528 KB
The second floating island has a tree and as an easter-egg to MNOG a sundial with a Lightstone. 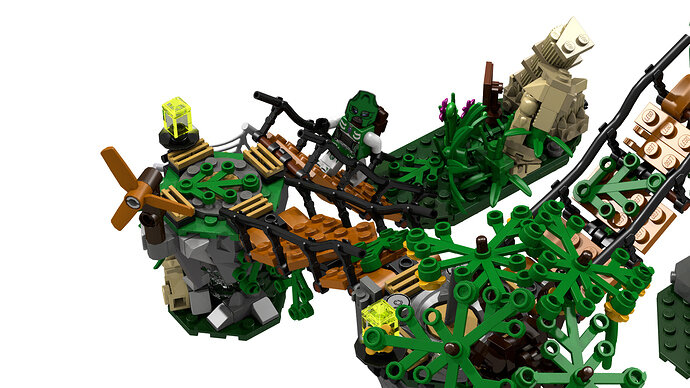 Shrine of Wind 8 mask.jpg1920×1080 659 KB
The first island has another Lightstone and a little pinwheel. 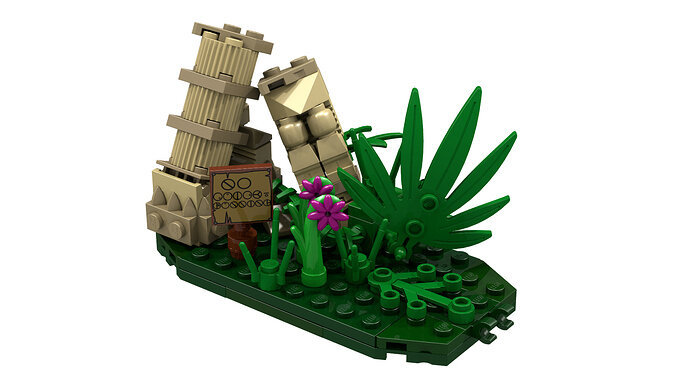 Shrine of Wind 2.jpg1920×1080 314 KB
As always I included a bit of scenery with some plants, some ruins and a little sign. It can of cause be connected to the rest of the shrine 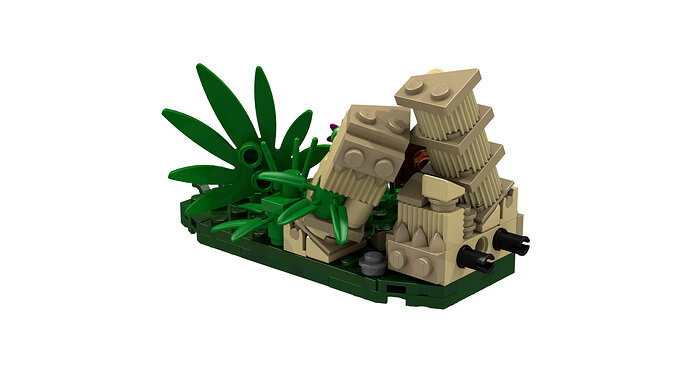 On the Podcast there was a discussion about if there would be flying vehicles and someone mentioned the idea of a mechanic Gukko. I really love this idea, so I wanted to build one for this set. 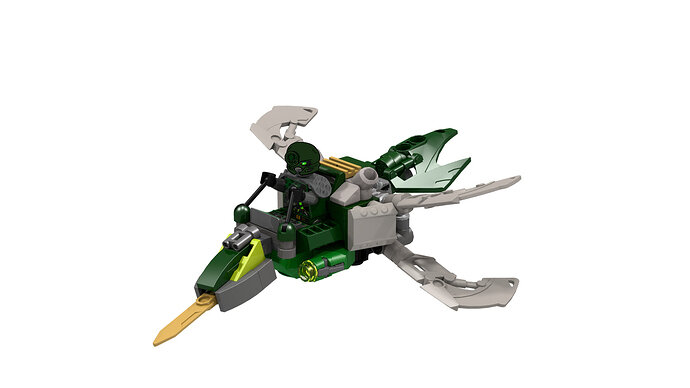 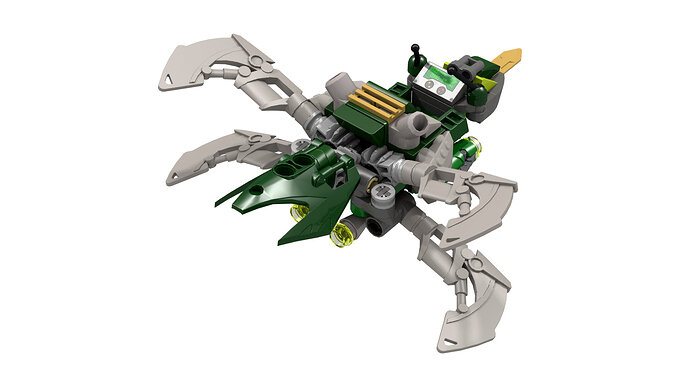 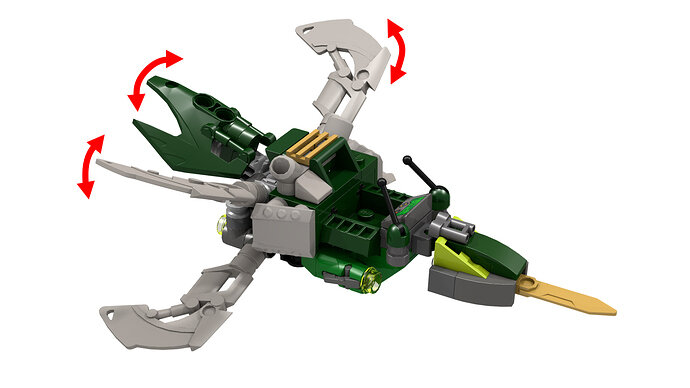 Shrine of Wind Gukko 3 Function.jpg1920×1080 225 KB
The mechanic Gukko has a similar gera-function to Ikir, so by moving the Vorox-Armor on his Back his upper wings move up and down. The mechanic Gukko also has two stud-shooters. 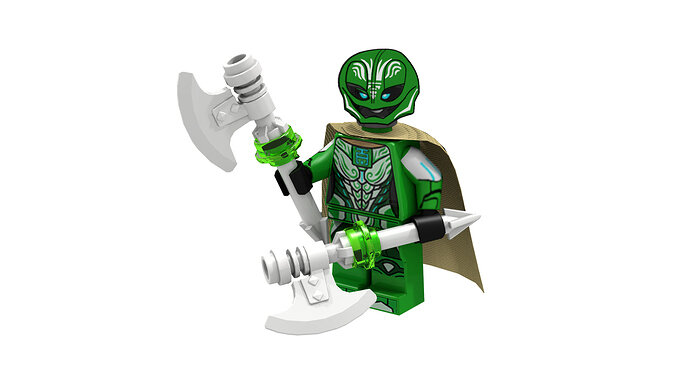 Shrine of Wind Lewa mask.jpg1920×1080 202 KB
With Lewa I tried to be as close to the official designs as possible and I gave her two axes as Toa-Tools 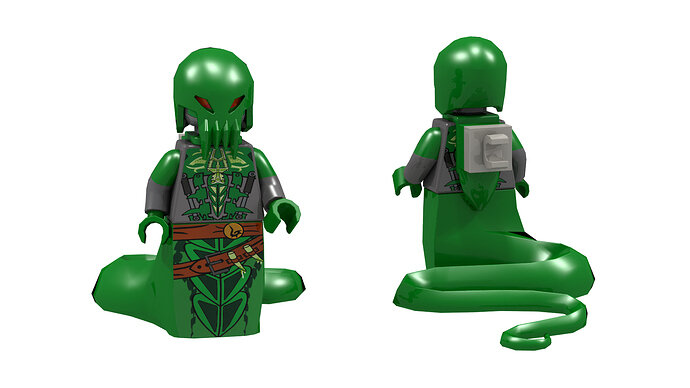 Shrine of Wind Lerahk.jpg1920×1080 238 KB
Lerahks design is similar to the other Rahkshi, but he uses the Ninjago snake leg-piece, which I was very happy that it can be printed in the LDD. 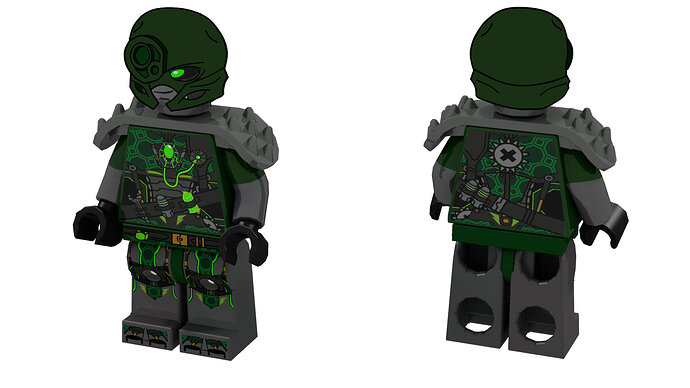 Shrine of Wind Sokoda 2 mask.jpg1920×1080 263 KB
The first Matoran in this set in my self-MOC “Sokoda” and he is a inventor from Kanae, he is the one riding the mecanic Gukko 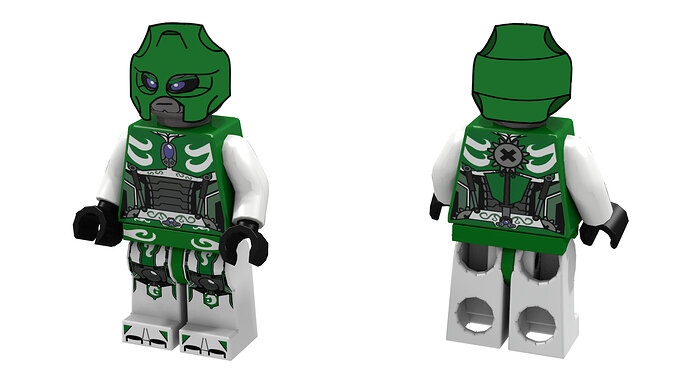 again, I’m not a fan of system, but I would buy this set as a bootleg

Thanks, I always try to bring some constraction/technic in these sets, this time its mostly in the Gukko

The design of the main structures is beautiful, and the gukko vehicle is inspired. This is stunning work.

Yoy know recently I’ve been Mocing with system and I would think “wow, I’ve really improved.”, Then I look at your Mocs and that all goes away.

Awesome Moc as usual, thank you for making me feel very inadequate in my abilities.

I gave him two axes as Toa-Tools

The Lewa is a girl in G3, which is why she has the “curve” look on her body printing.

Also, this is a nice set concept to end the year on. Just a shrine dedicated to the Toa of Wind.

Of cause your right, I’ll change that imediately.
Don’t know how I forgot about this, just wasn’t thinking about it while writing this text

by the way, love that Lewa statue.

It actually make me thing of an idea for a future set project you could thing about. One that would be like the Temple of Airjitzu or the Ninjago City set for Brickonicle, a large temple styled after the Kini Nui but with six statues of the Toa: 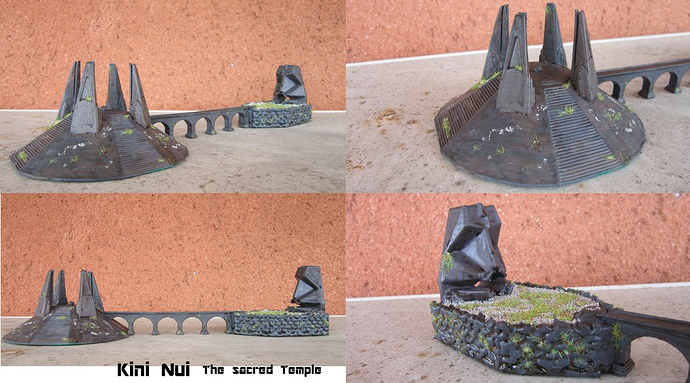 Now this would no doup be to much, but it is an idea i like at least the sound off.

Amazing as always, I love the things you make.

Yeah sounds interesting, but I’m always a bit cautious about big sets, because of the extremely long render times the render program has, but thanks for the great suggestions

A great thing to wake up to on New Year’s Day. That mechanical Gukko is leagues better than the concept that I popped in Oomatu’s thread, nice work there. Love the minifigures as always, and the choice of set is really something. Can’t wait to see what you come up with for Tiro; you’ve blown me away again.

As always, these are so good. If Lego released anything close to this I’d be like: OooOOOOooOoOo. The attention to detail, worldbuilding and tone is exactly what I’d want in a Bionicle system theme. Id buy as many of these sets as possible.

One thing I noticed though, maybe you should try add more Toa per set. If I was a kid and Lego released these sets officially, I’d try get as many of the Toa minifigs as possible while spending the least amount of money, since my parents didn’t like spending a ton of money on one massive set, but two or three smaller ones. Official Lego sets usually have a combo of different heroes and villains in one set, like Ninjago and Nexo Knights. Although now as an adult I’d probably just get the biggest set with all the Toa. Just a suggestion.

As everyone else has mentioned, as an actual creation, this stands on pretty high ground and I complement you for it.

However, in my opinion, as an actual play-set designed for kids to play on, due to all the little detailing, I find there is little room for actual play and posing of figures.

I think this set is a bit different, because it’s more a display set and I focused on showing the landscape of Kanae because some people asked for a more enviorment focused set.

I think it would rather work as an limited edition set or some LEGO store exclusive for fans.
@Ragdoll I was thinking about adding more Toa per set, because that is definetly what LEGO does (For example in Ninjago or Nexo Knights), but with my first wave of sets I wanted to represent the diferent regions, thats why I always wanted to include minifigures fitting for each region (the Toa and Rahkshi of the region and some Matoran) maybe after I’m done with my “region-based” sets I can include more Toa in one set.

Kanae has been my favorite region for a while now, and this just reminds me why. I just love the aesthetic of the floating rocks, plus that gukko design is great.

Your concepts are everything these sets should be and more! Always happy when you make a new one.

This is pretty great and I see what you mean when you said both of ours had the kind of ruins style. Yours definitely pulls it off better though👌

i love you use old g1 parts in here in new colors. allowing us older fans to get great recolors in the design ( if it was a set of course ). fantastic model.

The statue alone here is amazing, the Gukko bird is particulary good as you managed to fit the wing mechanics as well.