Okay, this came about due to a number of factors; partially due to the location and pivotal moment factor in Wafflemeister’s Fight for the Mask Fragment Set Concept, partially due to me finally looking through the Episode 1 Script, and my own designs for the Firespitters. 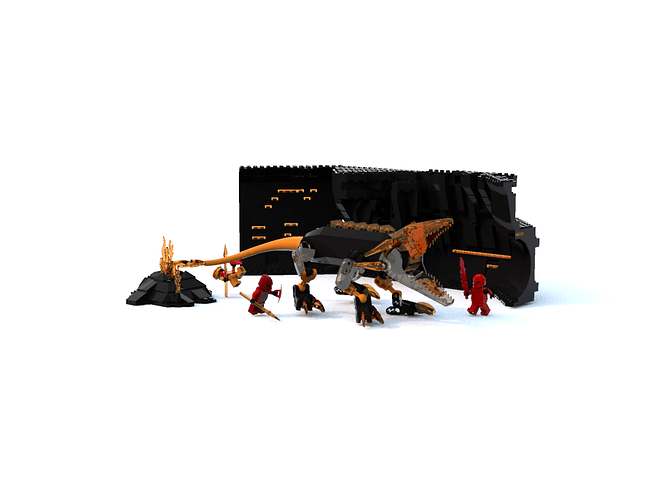 Now, the title is important for a couple of reasons; one, this is very much a concept, and it is very rough around the edges. The second is the name of the Firespitters; in the story bible, I could be wrong, but they are also called “Vako” in one passage. Me being me, I prefer more exotic names to English names, which is why I’ve been nudging for the name Graalok rather than Ash Bear for example, so I quickly took a liking to the name Vako (despite them being bovine Rahi in G1).

EDIT: The cast suggested removing the wall section entirely, so I’ll likely do some research into some similar sets if I can find them, and update this accordingly.

Updated set with the wall removed, and the more complex build for the Vako. 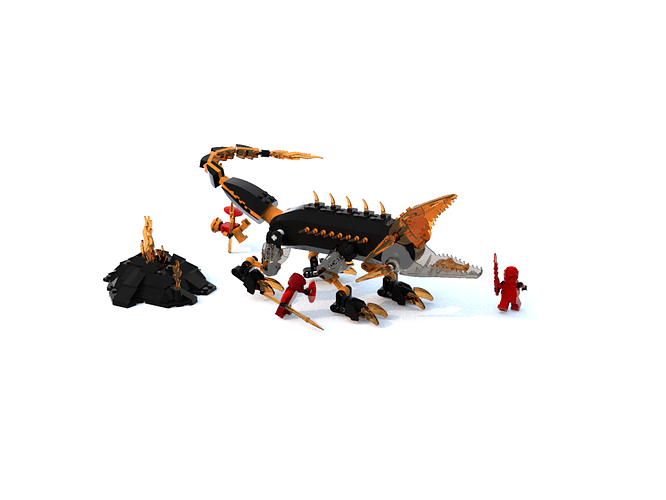 There’s also this version, which uses the cast’s consensus on the Vako with a simple body, but a Mixel tail. While it isn’t one piece, LEGO could potentially make a single piece mold. Regardless, the piece count of this version is exactly 200. 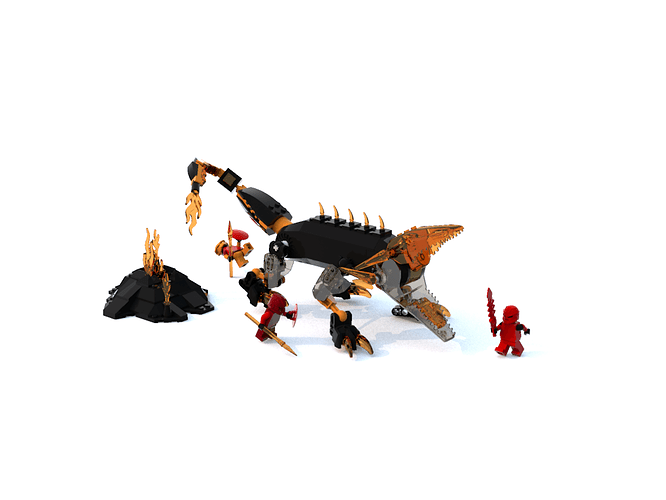 And a version that removes the fire pit and adds in a second Vako with an altered colour scheme. 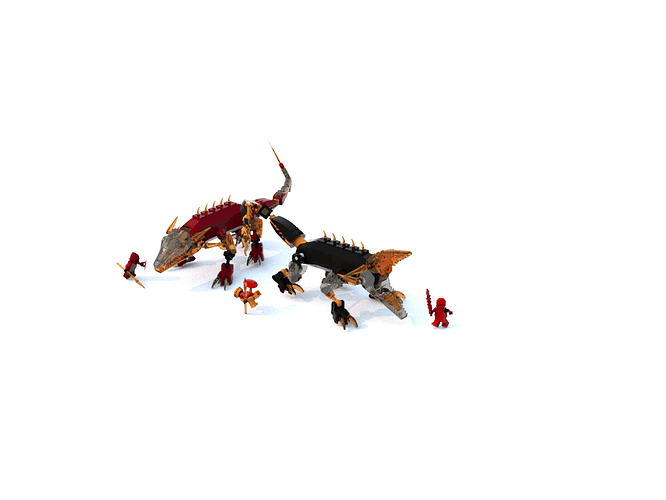 G3VakoNest4.lxf.png1024×768 108 KB
I was hesitant about this; on one hand, I’m very fond of the original colour scheme, and the only reason that I think this one works is because of the juxtaposition with the first one. I was drawing inspiration from the Rathtar Escape set for that. Piece count is 249.

The set includes three minifigures at current; Narmoto and two Mangaian soldiers, in addition to a single Firespitter/Vako. 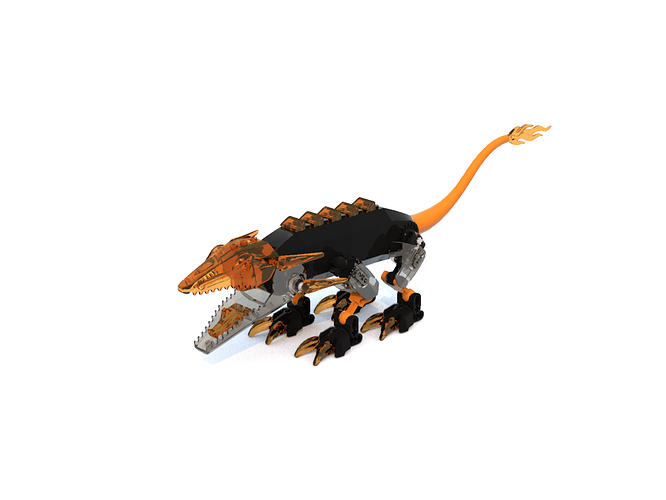 My Firespitter/Vako model is also in Oomatu’s Rahi thread, but I’ll add some stuff here. I have a sneaking suspicion, given my flip through the script, that the Firespitter model is larger than the cast’s ideas for them, which caused me some issues.

EDIT: There’s a few things that I think that I may need to clarify regarding the Firespitter model, @Jon, hopefully this clears up any confusion over it. I’ll also input all of my design notes from Oomatu’s thread.

It does indeed use the Lava Beast colours; the shells and the lower jaw are in transparent brown, as LEGO calls it. The jaw pieces and torso pieces are from the extraordinarily old (2002 I think) Dinosaur sets; this one was the Mosasaur, Dimetrodon, Iguanadon, Postasuchus alternate model. The design overall was also inspired by the design from the Epochal Fragment.

The torso is not a single piece; this entire Firespitter model is actually 78 pieces. It combines the six-piece torso with lengthening to give a proper place for the legs; the jaw actually covers the original shoulder joint. This is why the hind limbs are attached to a balljoint on an axle; they are threaded through the torso joint, while the front limbs just have a basic balljoint brick.

The cast did suggest that there could be some more detail in the torso, and the construction definitely leaves room for detail to be added, and they suggested that a Mixel-jointed tail could be an option. I’ll play around with the same torso and a different tail, and a more detailed torso and the different tail sometime. 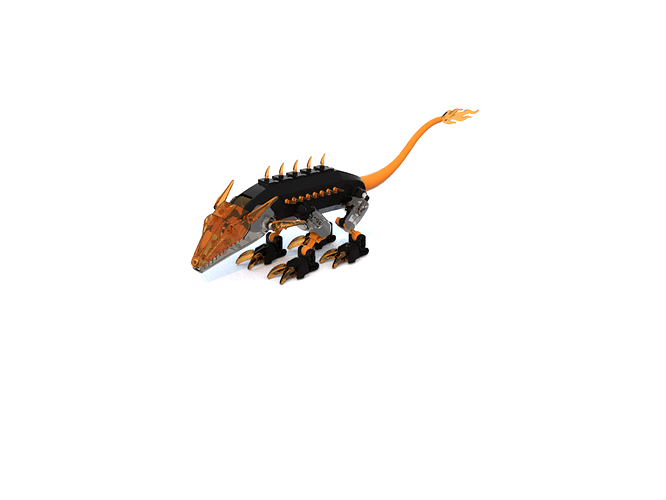 Altered tail, based on Elves Dragons of all things. 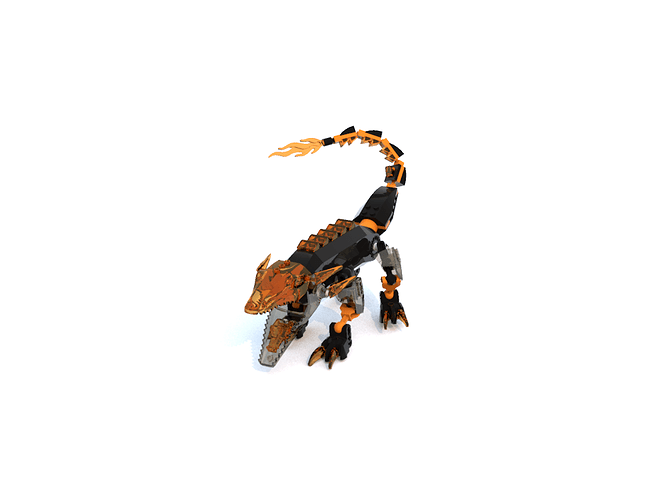 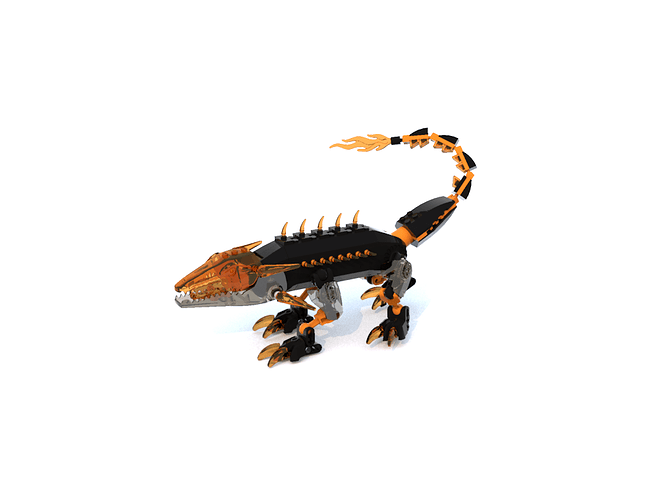 Note that there are some SPOILERS for the scripts here, so if you aren’t keen on that, avoid the below.

The Firespitters ambush Narmoto and his soldiers by dropping from stalactites, and I included a stalactite or two in this model that is far smaller than the Vako (I’m just going to start calling my model of the Firespitter “Vako” and the cast’s concepts, aka, the proper and technically superior, “Firespitters”). Later Set Concepts will likely overhaul this.

At current, the set includes two sections of the wall that can be blasted aside (indicated by the orange strips), in addition to a fire pit that one of the soldiers falls into.

Having gone over it, I’m thinking that a next concept would have a more “tower-like” structure, so I could potentially have the Vako hang from the ceiling. I did entertain the idea of a smaller model, but I’m very fond of this version.

So yeah, hope you enjoy my schizophrenic ramblings.

I was mentioned! Yay! Okay, jokes aside, this set I’m a big fan of. I really like the whole fire spitter design, and I would love to see the custom head mold it might have if Lego made it. I really like the set, but I’m not sure about the wall. It looks kind of plain, and needs some decoration or a function or something, but the rest looks sweet!

It does have a couple of destructible sections intended for the Firespitters to poke through, but it could definitely use some embezzling.

Why have you forsaken me Tahu.

(In all seriousness, he’s totally screwed).

Okay, since as per usual I’ve been periodically editing the main post, here’s a small sum-up of the updates.
Altered base body concepts for the Vako based on the cast’s suggestions.
Altered versions of the set that remove and add various elements. The wall has been completely dropped, owing to feedback in general.
Basic description of the construction and concepts behind the Vako.

Still loving it. Can we get the newborns? How do they reproduce? Eggs?

If I can figure out now to make little ones. That’s not a bad idea actually…
I would assume so; they are reptilian after all.

Asking because it is a different world, and there are always those weird animals that break the rules.
Here is a list: 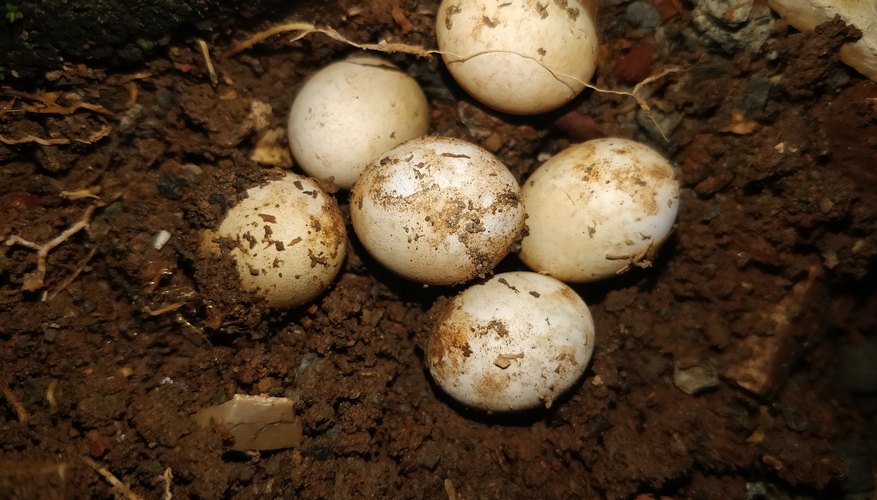 Which Reptiles Do Not Lay Eggs?

Many reptiles are oviparous: that is, they hatch their young from eggs they lay. Some snakes and lizards, however, give birth to live young.

True, true, there is the odd viviparous reptile out there. That being said, I think LEGO would likely go the egg route, and eggs always open up possibilities in stories I reckon.
Plus, the design possibilities are intriguing.

This is going on the general questions. As I believe that it has never been established. I assumed they did because of the name.

cool and yours has a good chance because the vako started the civil war based on the official story bible and for the record I like the idea of 2 vakos and the cave because of the story having a vako army would be more realistic (and more fun LOL) and here’s the story goes: the fire matoran are under attack by the rapidly multiplying vako hordes. though after a long,costly war they are driven back, then it takes a turn for the worst: the vako then attack Ihu. the ice matoran,not used to these beasts are pushed back. hundreds of innocents and soldiers killed. among them is the ihuan king, kopaka the heir to the throne blames the fire matoran and starts a civil war not knowing makuta’s influence is causing the vako to attack the matoran

It’s taken directly from a scene in the first two episode scripts; they’re available in the descriptions of some of the Brainstorm videos.

That being said, I do need to suss out a consensus on them, given their odd construction, whether or not in their mind LEGO would make more specialized pieces, and the colour scheme of the second one, since while the Lava Beast scheme is excellent due to its different nature, the other one is a bit too typical…

I don’t remember what the size of the Vako was stated to be actually…I just went with the Mosasaur head and old dinosaur torso, expanded it to add extra joints, and fleshed it out from there. Given how old the parts are, LEGO would likely go with more specialized, and smaller, molds if the set were made today.

No, no, I do get you. I’ve experimented with smaller designs, but the parts don’t quite allow for a design as I’d like. Like I said, if this were actually produced by LEGO, they’d have more freedom to make it smaller.