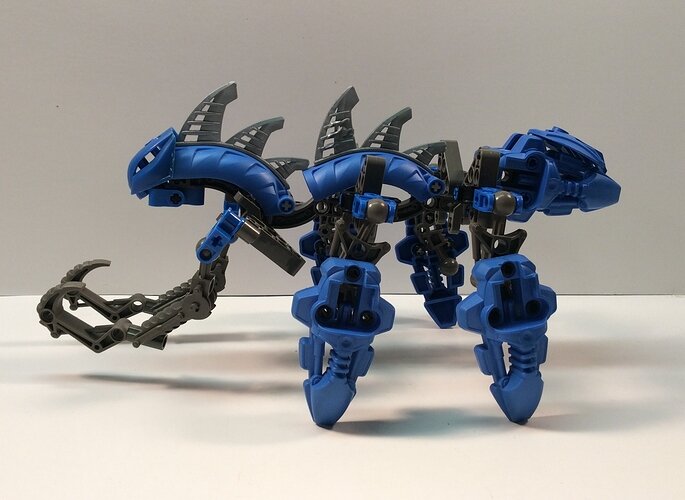 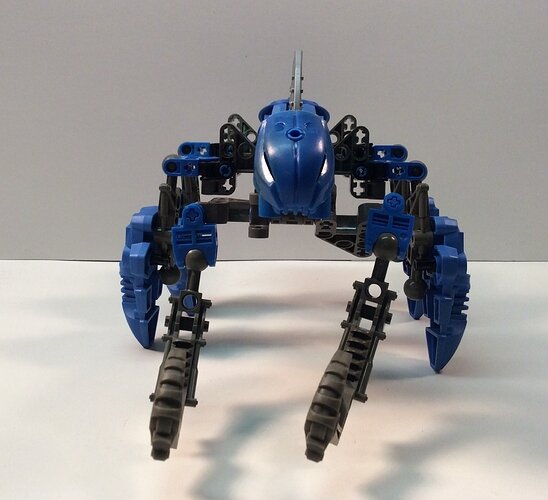 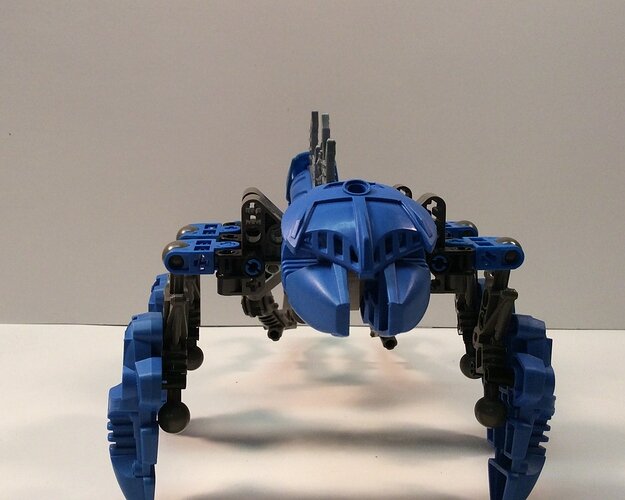 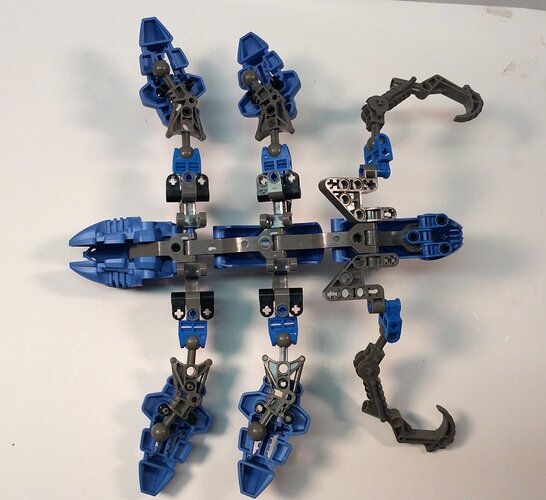 Told ya I’d be putting the Rahi Moc up!

So yeah, this is my 86 piece Rahi Moc I made as a possible 2003 period backup submission to Gantoscomics contest if I didn’t want to use Itek.

Don’t really have much storywise for this bugger, current idea is they’d be some kind of pest/pet for the Matoran on Mata-Nui.

Basically giant, ant like creatures, bigger than the Matoran, smaller than the Toa, and most of their species being fairly peaceful, if pest like due to their instincts.

I kinda see there being multiple differing versions of them, one for each of the basic elements and each their own seperate species, but only one colony of every species with their own ‘queen’ and differing instinctive actions.

The blues, such as this one, tend to drift around near Ga-Koro, the red around Ta-Koro, the green around Le-Koro, etc, etc.

I can kinda only see the Ta and Ko-beetles being aggressive, purposely attacking others in their territory and hunting Rahi for sustenance, whereas the others usually consume some form of plantlife/mineral making them less of a danger than a nuisance.

Most likely due to the rarity of plantlife and other forms of sustenacne due to the regions environments.

The Onu-Beetles consume stone/the minerals within, also carving large tunnels for the Onu-Matoran to use but creating the possible threat of them tunneling into the village.

The Po-Beetles also consume stone, this time more surface level based ones such as boulders and stone, being less tunnel oriented than the Onu-Beetles but still digging some, just mainly closer to the surface.

The prooobably also each have their own region based traits, Ga have gills so they can breath underwater, Ta are heat/fireproof, maybe can breath fire/increase temperature, Ko are the opposite, Le maybe have wings or some form of camouflage, Onu have digger claws, night-vision, and increased strength, and Po have some form of gripper claws and/or secondary eyelids for dust storms and probably thicker/wear proof armour.

I can also bet that multiple Matoran from each region have tried to tame some of these, probably succeeding at times at that… now I can’t help but I imagine the different reasons why and how the relationships between the tamed beetles and their tamers would be…

So yeah, that’s it, just a little tablescrap Rahi basically, and quite literally my first Rahi moc ever at that!

Not bad. Looks quite nice from the side, though the posing feels rather stiff from the front; the box-like shape that comes from having the legs completely vertical isn’t very good. But you captured that early Rahi style to a ‘t’, so props for that.

Ey, thanks mate! Originally I was just messing around and managed to form some crazy back piece from the rahkshi spines, so I was going to make a Toa but I somehow managed to devolve it into a rahi instead.

@jayzor17 Glad to hear and yeah, its posing is… stiff… let’s just say I’m still trying to figure out how to better connect the legs because these things turn like crazy due to how they’re connected to the main torso.

Definitely looks like a G1 Rahi, you’ve certainly captured that look. There might be some posing issues looking at the way you’ve connected the joints though.

Really cool design. Also very strange and kinda creepy (If I saw this in my backyard I’d scream.)

Haha, thanks and I can assure you it’d be the same for me! XD

Rahkshi are my favorite line and this is rad! I’ve got a soft spot for combiners if old sets. Though I wouldn’t call it a beetle so much as a nightmare. Is the head wedged on some pins?

Ey! Glad to hear mate, also, hahaha! Good choice for description of it!

Yeah it is. That head design is weird as heck, and cannot rotate at all.