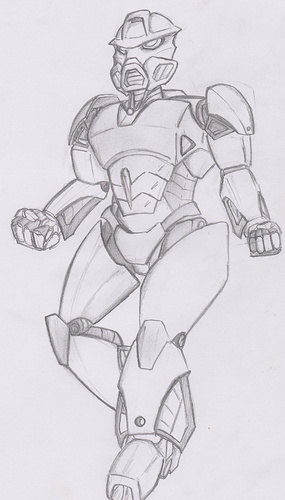 I draw too, somewhat. any way Gali!

I was never a fan of how small she looked outside of the figure so I was trying to give her a look closer to that.

Well, thinking outside the norm ain’t so bad.

I’d suggest that if you were going for a bulkier, stronger look, you might want to make the arms just a little thicker, to match the torso. Right now, she looks like she’s still plenty bulky on the torso without the armor, but her arms would be pretty thin with the plates removed, which to me suggests ‘out of shape’ more than it does ‘strong.’

Really nice drawing, though. Really, my only other complaint is that her eyes seem to be positioned a bit high on the mask, which looks a little odd, but that could be as much a style thing as anything else. Great job!

Edit: her left hand looks a bit small too. That probably contributes to the somewhat underwhelming look of that arm.

looks really detailed, but she looks a little more… stocky than I last remember.

She looks a little large, but I like the styling!

I always saw Nokama as being thin and Gali as being a bit more boisterous. This is a great interpretation, though like @Scorpion_Strike already said, the eyes are a bit high and the arms could use some more bulk. I like it, and I’d love to see more from you in the future!

wish i could draw that well… anyway now her mask doesn’t seem so big!

i’m not the only one who thought the nuva masks were huge, right?

i’m not the only one who thought the nuva masks were huge, right?

Nope, you’re not the only one.

Gali, you so thick. Swimming has done you wonders for your calves and quadriceps.