In the Dark Hunter book, Gatherer is describes as having a Rhotuka with a Mind Scrambling power, however the model does not have any Rhotuka launcher. Rather, it features a Kanoka launcher, which is not mentioned in the entry:

He also carries a wide array of weapons, including one blade that can slice through solid protodermis, another that doubles as a shield, and an energy cannon. His Rhotuka spinner carries the mind scramble power.

Another thing to note here is that mind scramble is written in italized, which is usually done for Kanoka powers.

During Gatherer’s appearance in NOGLB (which was written by a fan), he is also describes as using a Mind Scrambling Rhotuka, in addition to using Kanoka:

Norik recognized the Hunter from her description; a former Matoran named Gatherer, captured and turned into a Dark Hunter. From intelligence gathered, Norik knew that he possessed a Rhotuka with the ability to scramble minds, something not only a potent weapon, but sheer agony for one whose mind was her greatest weapon.
[…]
Unleashing his vast array of weaponry, Gatherer fired an arsenal at Norik, blasting him with his Rhotuka, energy cannon, and several Kanoka disks. Norik was overwhelmed by the assault, and he was caught by Gatherer, who dragged him inside. 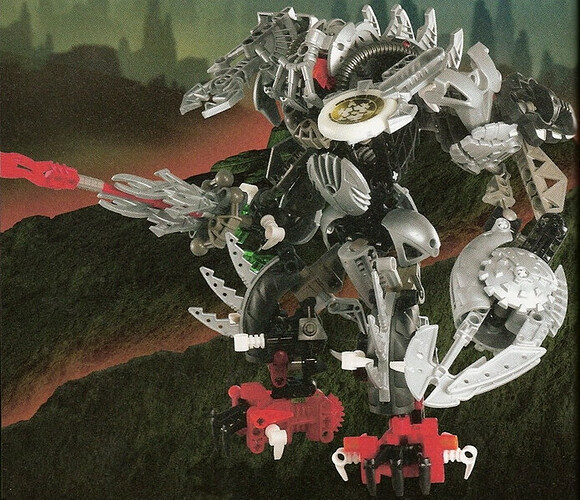 So, my questions are:

Similar situation to Conjurer – Gatherer’s entry says he has a mind scramble Rhotuka. The model for Gatherer has no Rhotuka launchers at all, but he has a Kanoka disk launcher on his shoulder. I also noticed that mind scramble is italicized, and Kanoka powers always seem to be italicized while Rhotuka powers are not. Did you mean “Kanoka disk” when you wrote “Rhotuka spinner”?
Probably

Not posting this as a definitive answer, but just additional information to take into consideration.

Also, as an addendum to this question: is Mind Scrambling the same as the Confusion Kraata power, and if not, what are the differences?