Finally got around to fixing the images. 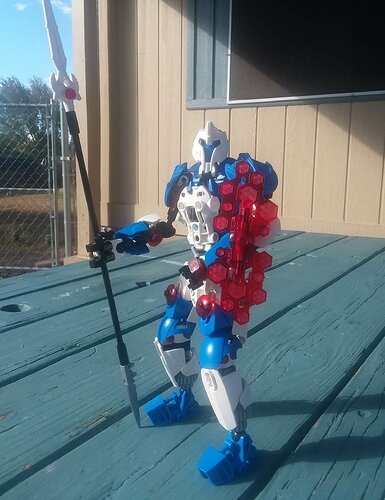 Gavin was a Matoran from the Southern Continent on Spherus Magna. He was pressed into service as a soldier by a faction of Toa Nobility mounting race war on the Agori. Gavin excelled in his brief training with the spear, so much so that he was assigned to train new “recruits”. As he trained them, Gavin was allowed to select his own unit. For several years, they fought against other Noble factions on their way to the Agori home village, and Gavin established a reputation for keeping his squad alive. He lost only 8 men in 2 years, standing out among the squad captains and earning himself a nickname; “The Blessed.”

When the army arrived at their destination and engaged the Agori, they were more than ready to fight the enemy. However, Gavin had gained too much of a following among the army for the command staff to trust him. They sent him and his unit on an alleged secret mission into enemy territory without backup. Gavin was the only one to survive. He escaped back to camp with the news of the slaughter, only to have his commander label him a rogue and a war criminal. He managed to escape their enforcement officers, but was captured but the Agori.

They kept him prisoner for a time, but Gavin offered to train them to fight with spears against the Toa and Matoran. Finally, they even allowed him to fight with them on the field against his betrayers, only to lose his entire outmatched unit to the Matoran.

Having lost his closest friends twice, Gavin left the war and found his way back to his home village, just in time to find his old “recruiters” plying their trade there again. Gavin fought them and killed them in front of the whole village, and, out of gratitude, they gave him a Toa Stone and appointed him to be their guardian. Gavin took up the responsibility, and began training a patrol unit to help him. Around this time, Nikolas Utu happened upon Gavin’s village and offered Gavin a place on the Toa Utu, which Gavin declined, though he did allow them to lodge in the village. While the Toa Utu remained there, a band of Dark Hunters raided the village in an attempt to claim the bounties on the Toa Utu and Gavin. They massacred over half the village before Gavin and the Utu could stop them, and Gavin lost his people again.
http://board.ttvchannel.com/t/nikolas-utu-the-zealot-self-moc-toa-of-truth 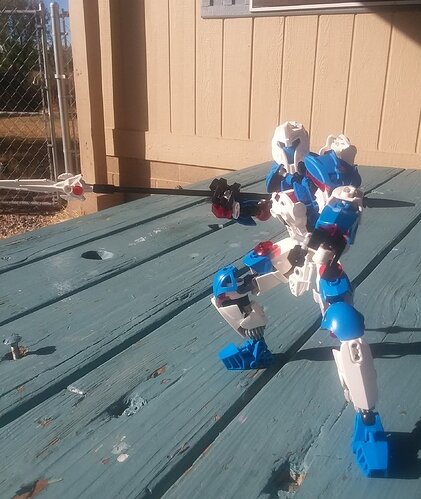 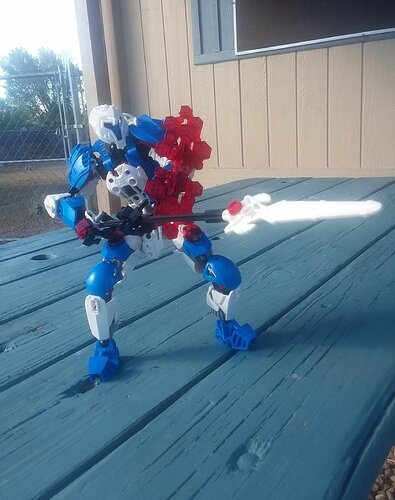 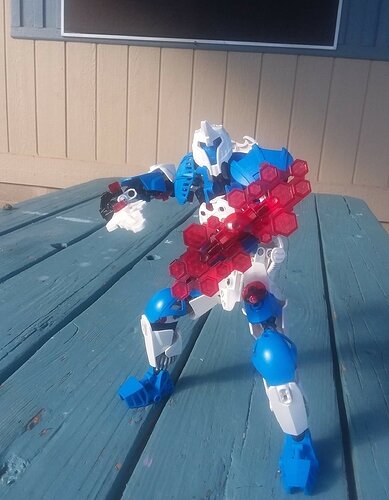 Gavin is incredibly skilled with a spear, both in unit based combat and as a duelist. He is the only current Toa Utu to have defeated Nikolas in training. In addition Gavin wears the Kanohi Intrask, the Mask of Inertia. With this mask, Gavin can control his personal momentum, allowing him to run faster, hit harder, and jump higher and farther. He wears heavy armor to compensate for his Kanohi use. Gavin is elementally a Toa of Lightning, but typically reserves his lightning powers for his most dangerous foes. 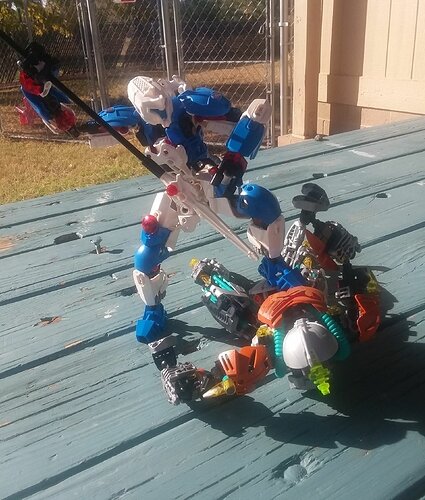 Gavin has become cynical and mistrustful, especially of his new teammates. He is afraid that if he allows himself to grow attached to them, like his village and his two units at war, that he will eventually cause their death. Perhaps, Gavin thinks, that he deserves such a fate, but his team does not. With that in mind, Gavin has sworn to protect his team at whatever cost. He has also taken up Jethro’s pact with Gideon to kill the Toa of Judgement should his Helm take control.
http://board.ttvchannel.com/t/gideon-the-redeemed-toa-of-judgement 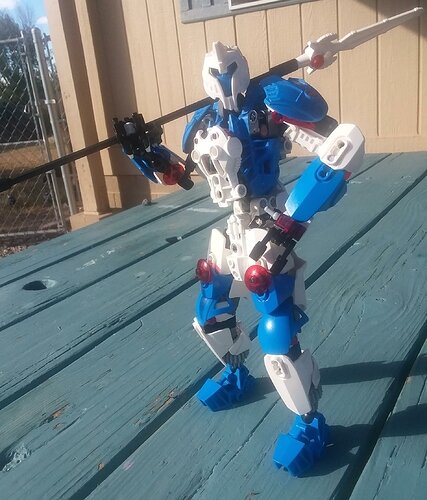 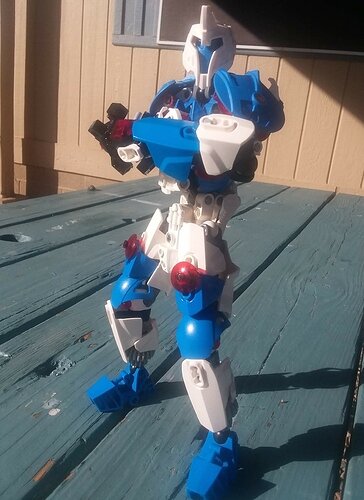 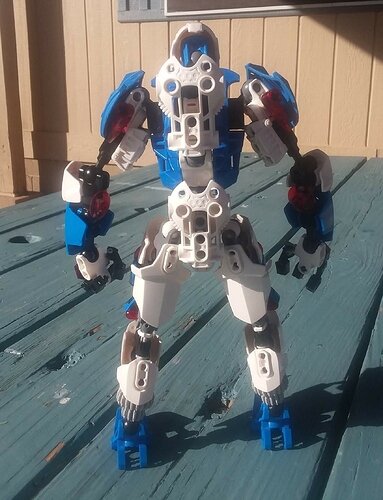 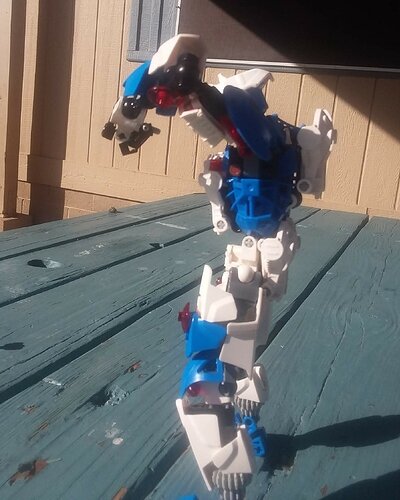 Gavin carries his spear with him everywhere, and his left gauntlet is equipped with a hard light barrier projector. 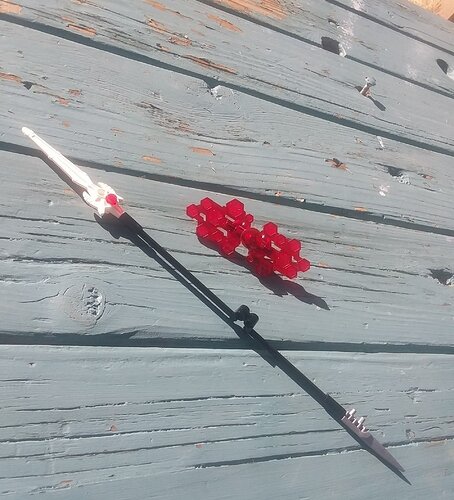 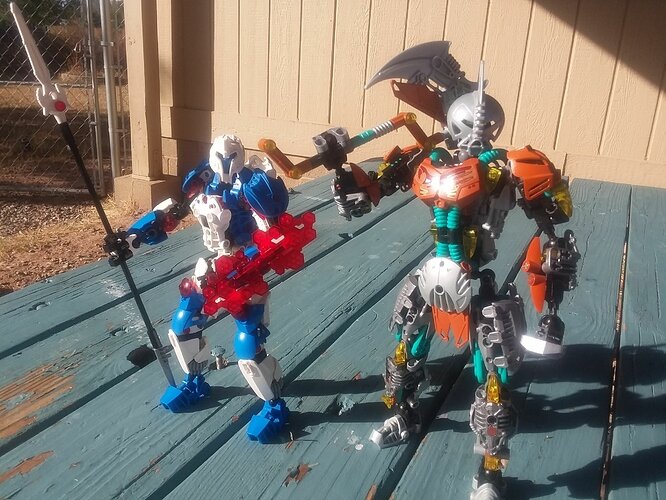 I really like him, but he could use some more trans-red, maybe add another circle on his chest?

I guess you can’t really see the red in his chest in these pictures… I will see what I can do! Thanks!

Ohhhh, I see it now, I missed that.

I will still find a way to get him a real heart light though. Thanks!

Thanks!
Where on the tires, the upper arms? I am concerned about how much articulation you lose with that technique; is it still pretty good?

Yea, the Glatorian neck that makes up the joint.

You can get about a 90 degree out of them if you use the small, smooth ones. From my own experience, that’s still perfectly good for a wide variety of poses, but that’s just for me.

You could definitely try it out and see how you like it, because really that’s my only nitpick with him, he looks fantastic otherwise!

Ok that’s good to know. I don’t suppose you know which part off Bricklink that is?
I am glad you like him!

Ok that’s good to know. I don’t suppose you know which part off Bricklink that is?

Not for Bricklink specifically, but it’s this tire: 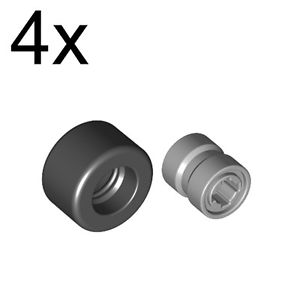 Sweet, thanks! I will see if I can include these in my next order… in a few months Haha!

Nice shaping, this is great

I appreciate that, THANKS!

You can fix the pictures being turned by cropping the photos (just a little bit) and then reuploading them into the topic.

Like your other MOCs, I think this guy is pretty solid. The colorscheme is good, and the overall proportions seem pretty balanced (the forearms are a little too long IMO, but that’s kinda nitpicky.)

There are two places where I feel things could be improved upon:

(Obviously both of these issues may revolve around whether you have the parts or not; if you haven’t yet, I would check out Bricklink if you want to get more parts.)

Sorry for going into full-out critique mode; I have a hard time pointing out what I like about MOCs over the areas where I feel there can be improvement. I think you have a lot of potential as a MOCist, so I want to try to help you grow in your skills based on what I’ve learned and heard from those better than myself.

These are both so good.

I see what you mean about the color blocking. The torso doesn’t follow the same patterns as the limbs. I think I can actually fix that while improving the texture if the chest(if the parts exist, that is haha), so thank you! I did wonder, does the layering of the CCBS shells(on the forearms and thighs) help at all with the texture problem? I tried to get ahead of that issue with that technique. Let me know what you think!
Thank you for some practical comments!

@BlackboltJohnson Thanks! Really appreciate your work with CCBS, so that’s encouraging!