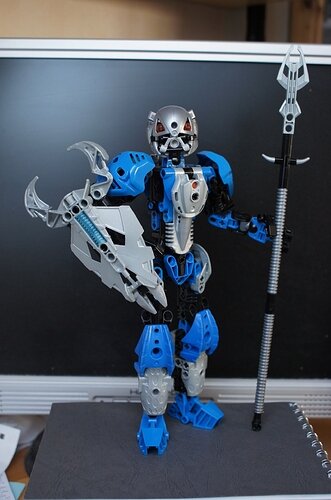 Hailari was a member of the mythical Toa team that defeated the Kanohi Dragon at the dawn of time and saved Metru Nui. While revered as heroes for millennia to come in Metru Nui, the team’s popularity in the rest of the universe soon lost its legendary edge, however, as no foe they encountered afterwards could match the ferocity of the Kanohi Dragon. Eventually the team split up as several of the Toa became Turaga, the ones choosing to stay Toa, Hailari among them, parting ways.
It was the Prosecution, the centuries long war of the Brotherhood of Makuta and their allies against the remains of the Barraki’s kingdoms, where Hailari could truly display her skills again. It was thus no surprise when she drew the attention of Makuta searching for exceptional Toa for their Hagah teams. It is still unclear if Hailari’s friendship with a Toa of Psionics named Gelisa had her end up with Makuta Netrux, or if Netrux simply wanted a legendary hero in his Hagah team to brag around with, but it quickly turned out that Netrux didn’t in fact have any particular use for a Hagah team outside of Gelisa who he made his assistant due to her Psionic powers.
Trapped on Destral unless another Makuta borrowed her service from Netrux for short periods of time, it certainly wasn’t a life fit for a hero of Metru Nui. Only after Netrux’s death did Hailari finally get a chance to escape the Brotherhood… (to be continued)

Equipment:
Hailari wore the Sukohi, Great Mask of Stasis which allowed her to create Stasis fields around a target.
Her primary Toa tool was her shield through which she could channel her elemental Water powers. Additionally the shield was later outfitted with a mechanism that could cool down any water channeled through it to the point where it would freeze upon impact. Hailari had to be careful about not overheating this device by too frequent use.
In terms of weapons Hailari didn’t have a particular favorite, instead usually switching between different ones depending on the situation. As a Toa Hagah she was given a spear that could convert her elemental energy into energy beams. 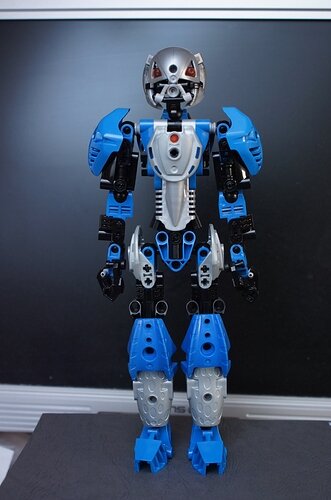 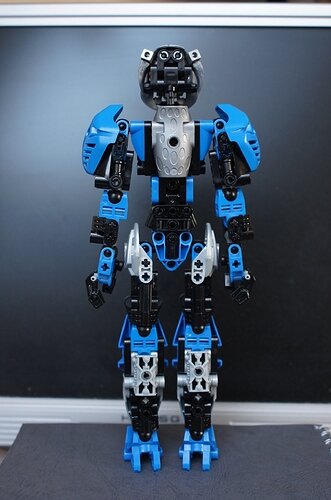 With a Kanohi Dragon scale as armor / size comparison 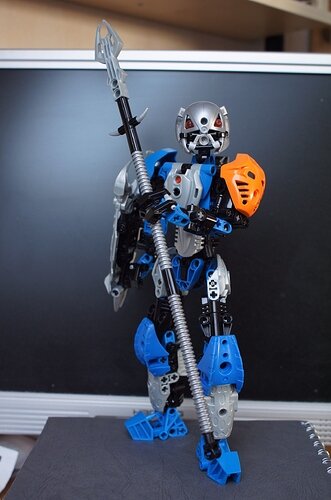 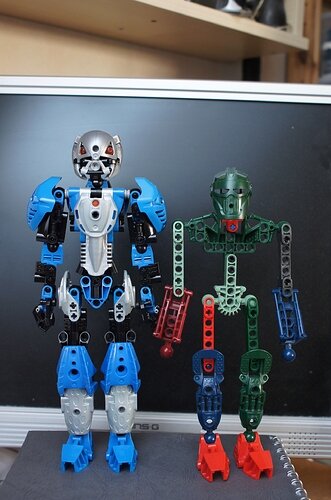 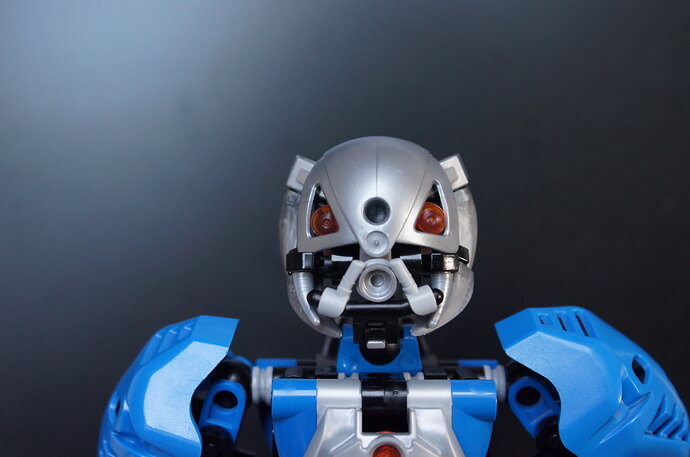 Another quick Toa MOC because I felt like it. Turned out a bit tall, though - also I’m personally not a fan of the head here. By itself it’s a decent head, but I just don’t feel like it fits the character. Any mata blue or silver masks I have weren’t better, though, so I decided to use a slightly altered design of my mask of Stasis as used on my MOC of Makuta Sachel (by the way - that Haialri wears a Mask of Stasis was decided way before I built this MOC).
Everything else turned out quite well, I suppose.
I should really start building more Makuta again…

Very clever design of the shield and head, I like that the masks are armour pieces, great use of those parts.

Wow! That head is very creative, and looks amazing! I almost thought it was Ant-Man for a second.

The head is really cool!

Please put the moc in some more action poses!!

This is fantastic, I love that head design! I also like how you’ve kept the colouring consistent, with silver and blue going over the black like amour over chain mail.

i really like this you did an amazing job