She was not Makuta, but she was indescribably ancient and disturbingly frail in appearance.

“I am Helryx, leader of the Order of Mata Nui.” 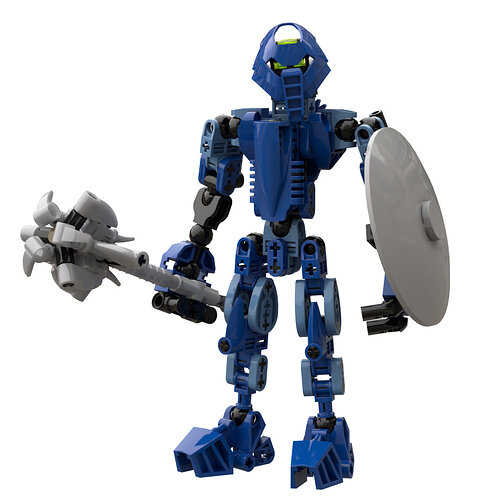 Yup, throwing my hat into the ring as well. 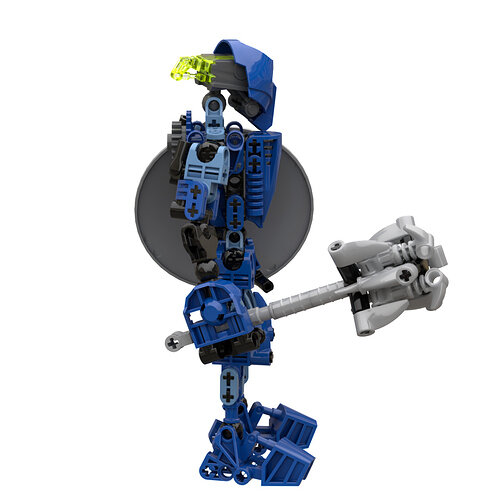 Bit of info - given her design as the first toa, and some things Greg has discussed, I went with a build heavily influenced by early ('01) Bionicle, at least in appearance. As seen, I at least kept the 01 hand and feet, used an 01 color scheme which includes reserving metallics for the weapons, and I even used a Slizers part for the upper torso. 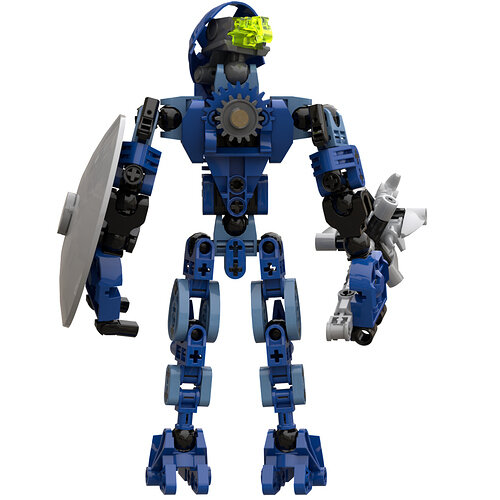 The build was made in Stud.io and is purist - every part was made by Lego in those colors, so this could be built for real without painted or custom parts. The only issue is that I had to use a custom Metru head cause Stud.io doesn’t have that piece yet, but it’s not made right, so an axle couldn’t fit through it. 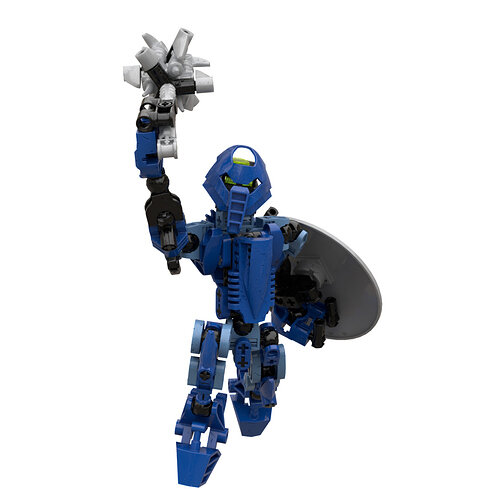 Frail, but not fragile 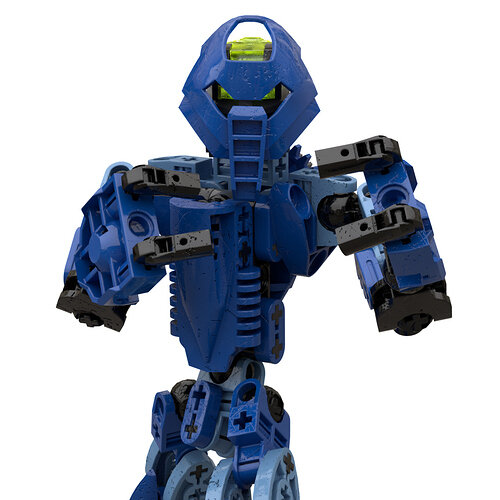 You may have noticed the different finger types on the hands. Well, they’re interchangeable! I’ve included one “grabby” hand set to hold the mace, and the extra “bendy” fingers are placed on the upper arms, where the grabby fingers can go if you swap them around, as shown here - 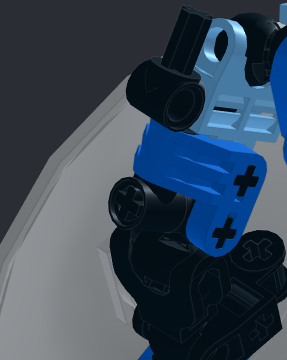 “In over 100,000 years, the Order has revealed its existence to very few, and then only in a time of great need. This is such a time–and we have need of a unique Toa, one who walks the world of both light and shadow.” 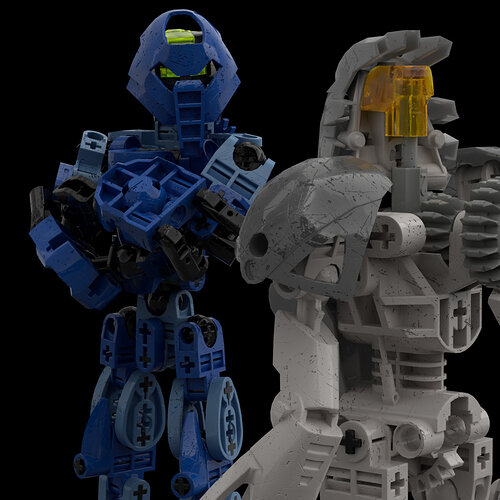 Breakdown pics - Decided to focus on the torso, upper arm, and mace, respectively. I’ll be happy to show more if people want! 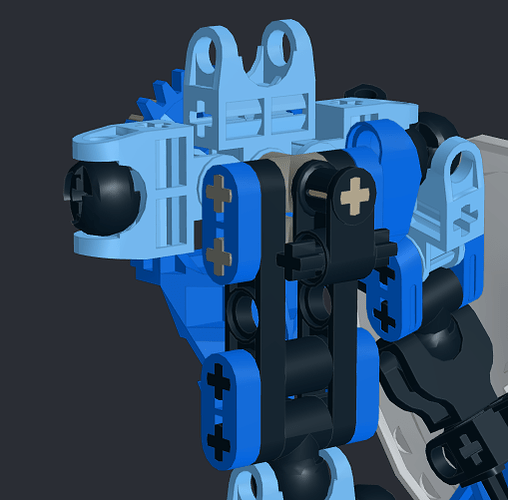 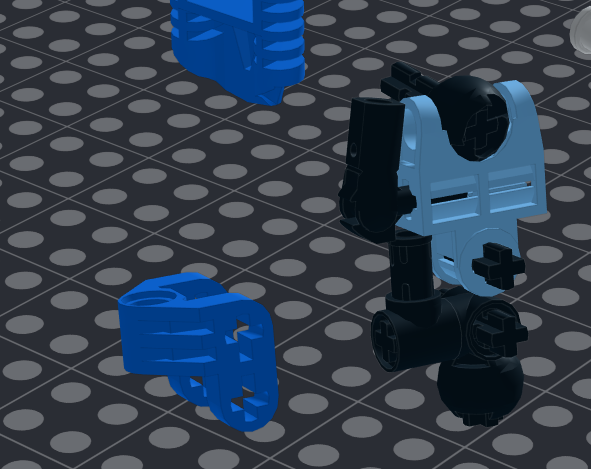 Here’s an extra pic not meant to be a part of the actual contest. Helryx went through a lot of changes, some of them I’m really happy with, but there’s a lot I wish I could have kept. However, anything I wanted to keep would take away from her frail appearance, so I’ve decided to include a lot of the ideas I had into one composite moc for you all. It also shows how I originally attached the shield to her. 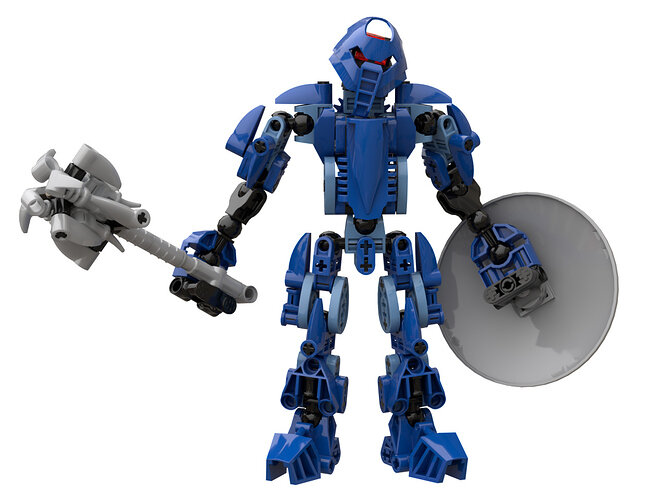 Wait, they make the three-axle-hole-connector in black? I thought it only came in dark brown. Also, the hand connection really limits articulation in physical form. That’s no deal-breaker, though.

I like the proportions. Is it scaled to a Nuva build?

Just about. She’s a bit taller than Takanuva, then again who knows how big the official mask will end to being

I actually prefer the Bohrok eyes on the shoulders from the prototype, but on the whole the model is fantastic.

Thank you very much! Those shoulder pieces lasted for most of the build process, but I thought it added too much to the area once I put a mask on her. The lower leg build was one that nearly made it to the final design, and I honestly still really like it, but I had to remove it in order to keep with her modern cannon appearance

@darkbrick999 If you’re talking about those pieces on the mace, Stud.io had it in black with no issue. According to bricklink it was released in black in four sets - https://www.bricklink.com/catalogItemIn.asp?P=10288&in=S

Pretty solid build overall, I really appreciate the amount of joints you put in.

Thank you! Posability/articulation was a big thing for me, and I was very pleased when I worked out both the shoulder and finger articulation

That’s goof to know, I always thought that that piece was color-locked.