Finally posting after working on this for a while, here’s my interpretation of Helryx, the First Toa! 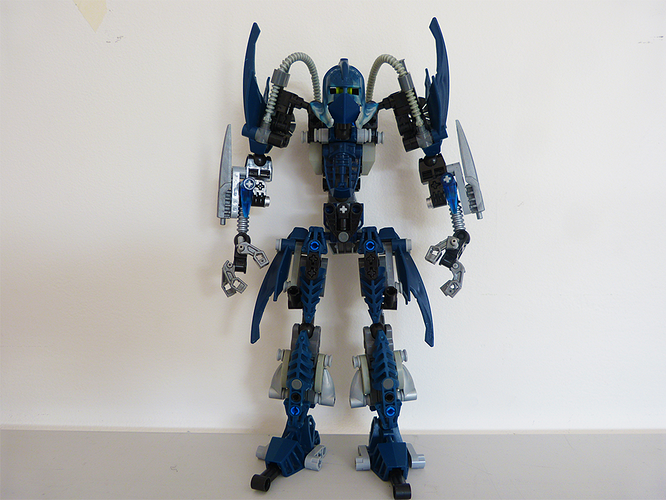 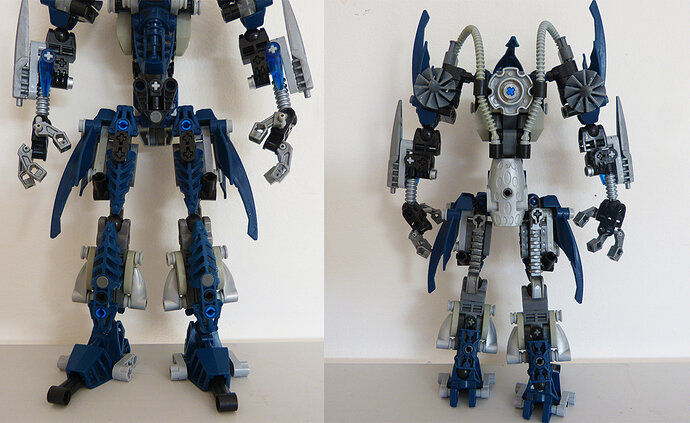 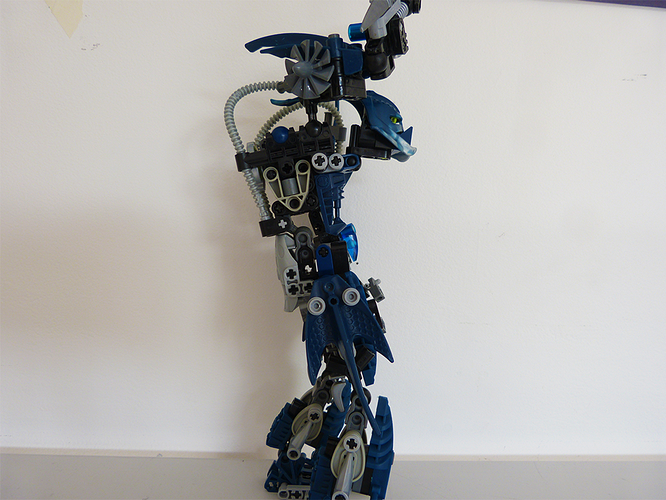 Helryx wouldn’t be complete without her robust, ancient weapons, so here they are: 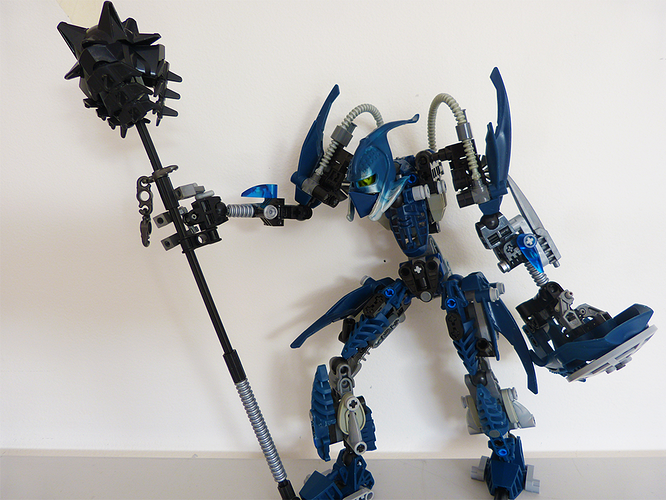 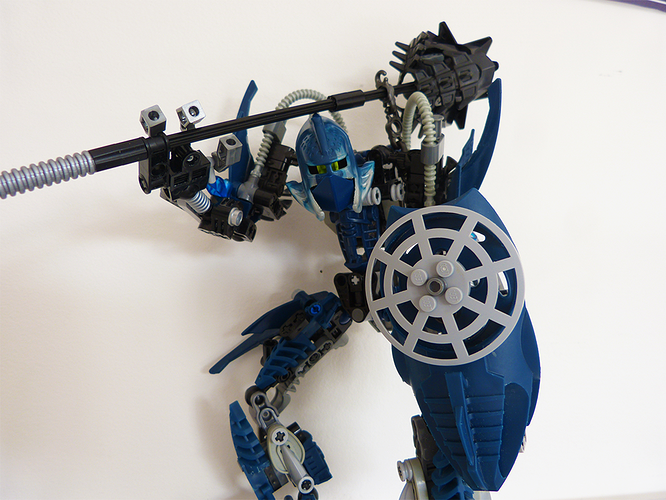 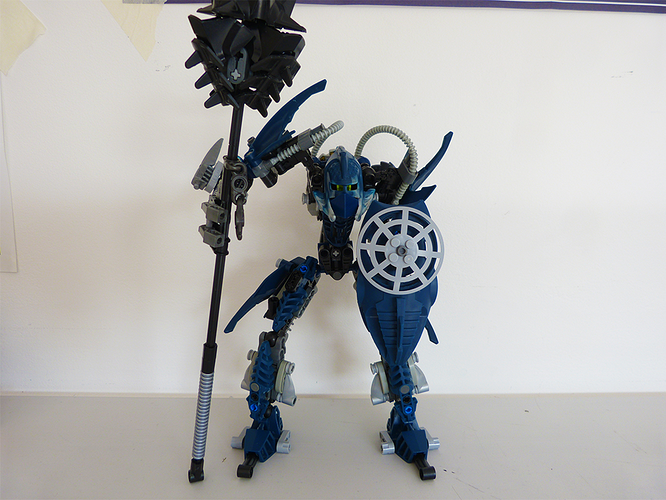 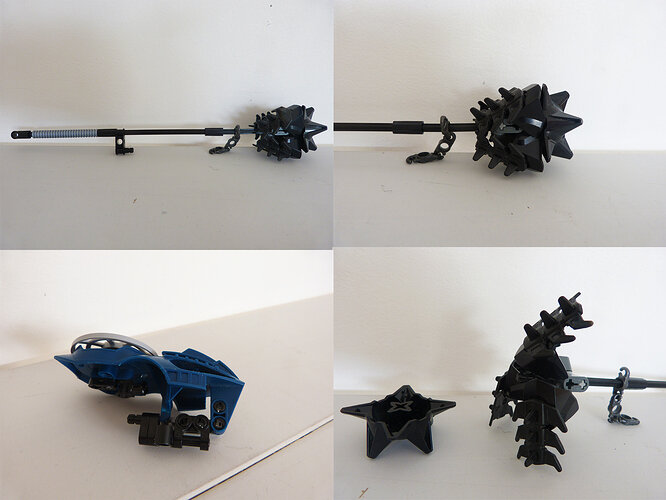 Here’s some breakdowns of the body 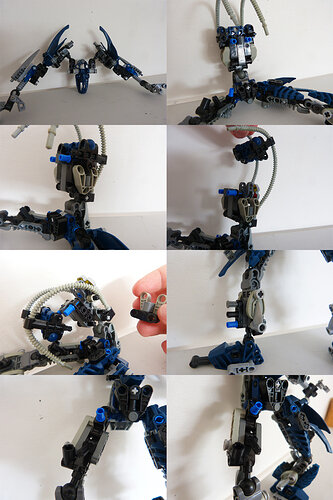 Now to explain some design choices.

I felt that Helryx would most resemble a Glatorian more than any other Toa, as the Toa were based off the Glatorian. Given that Kiina is our only example of a Water Glatorian that we know of, I designed Helryx to resemble her the most. This is reflected in the fins, the torso size, and of course, the mask.
The mask is, of course, a placeholder, but I wouldn’t mind if the final Kanohi design would somewhat resemble a Glatorian helmet.

The backwards life counter on the back is intended to represent the transition from Glatorian to Toa, as the next Toa to be built, the Mata, have a gear on their back. MOC Helryx’s is non-functional, however.

The tubes are intended to convey her prototypical nature, as well as the turbines on her arms. I was trying to for a very ‘ancient’ look, this was my motivation in giving her a ‘battle’ skirt and the worn blades on the forearms. Her mask is also intended to resemble an ancient battle helmet. Helryx always came off to me as a hardened warrior who gets the job done, she doesn’t use ‘water blades’ or ‘climbing hooks’ as her tools, she has a Spiked Mace and a Shield, and she’s not afraid to do what needs to be done. She both looks like she could wipe out an army in seconds with a tsunami, and end a Makuta’s life with her bare hands. 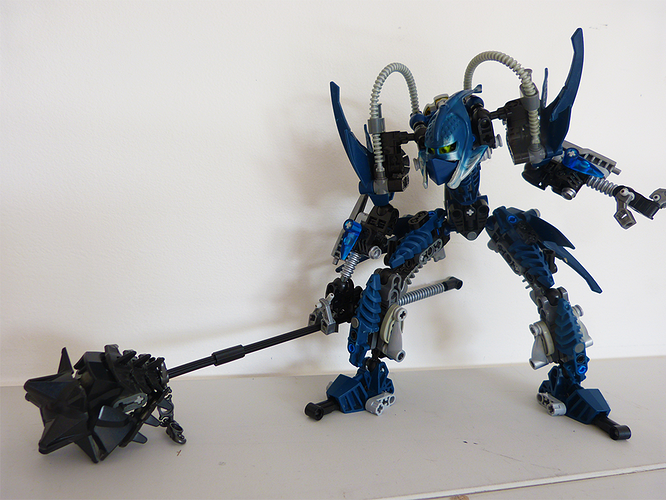 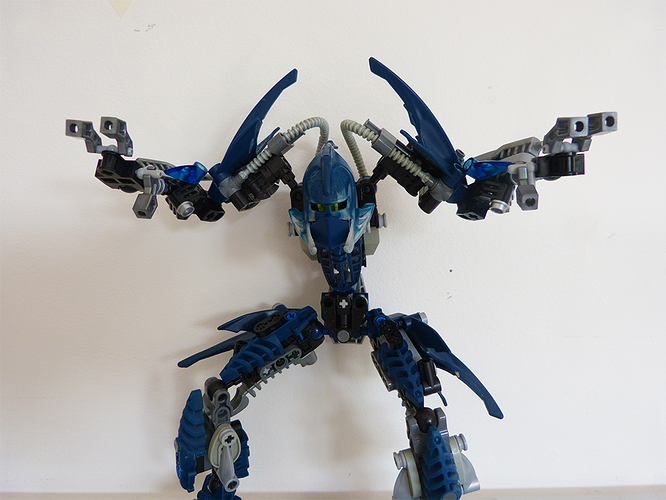 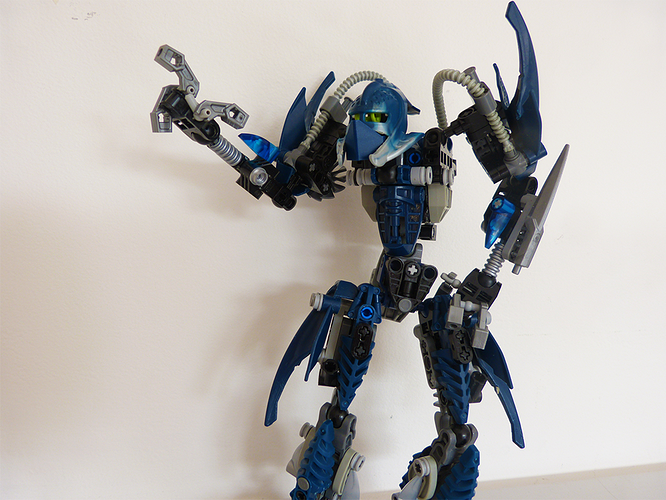 And a comparison with a promising new Toa of Water… 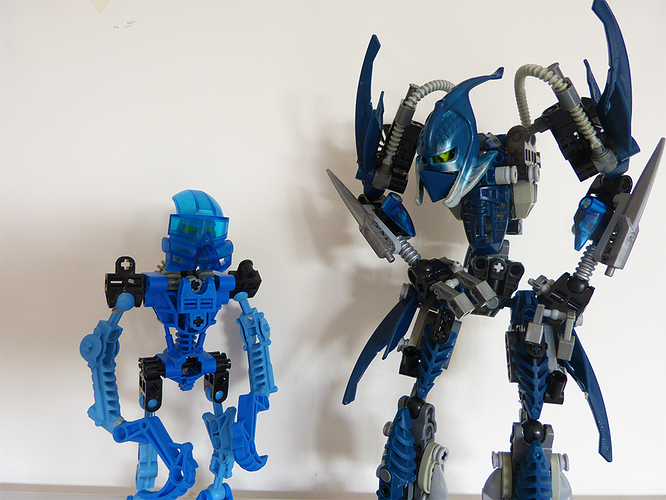 For reference, this Helryx measures about 22 cm to the top of her head, so she’s about Inika height.

Thank you for checking this out! Feedback is always appreciated!

Link to the Helryx and rules topic:

It’s time for the first. The first contest, on the first day on June, for the first Toa. Your quest, should you choose to accept it, is to create the Helryx, the first Toa created by the Great Beings. Her appearance has been described a few times, most notably by these two quotes: “She was not Makuta, but she was indescribably ancient and disturbingly frail in appearance. Her mask and armor were pitted and scarred from a thousand battles. She looked like a Toa, but her armor and mask design didn’t resemble anything Takanuva had ever seen before.” — Narrator, Swamp of Secrets “Iruini turned. Standing on the bow of the ship was a Toa of Water he did not recognize, carrying a spiked mace and a shield.” — Narrator, Dwellers in Darkness chapter 2 Based on this, your entry should: -Be b…

I like the idea of her looking glatorian-like. Although, Tarix is another water glatorian.