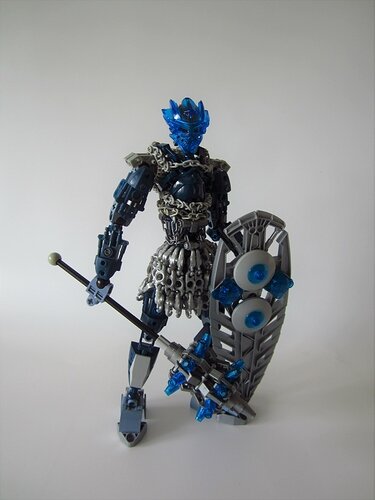 Her “frail” appearance and “fought a thousand battles” didn’t really work together in my opinion so I gave her some armor that might look different to some Toa. Some chainmail like we used in older times, perhaps the first Toa also used different types of armor than current ones. While underneath all that she still looks thinner than other Toa. Her armor is also easy detachable in the model as well in case you’re wondering. 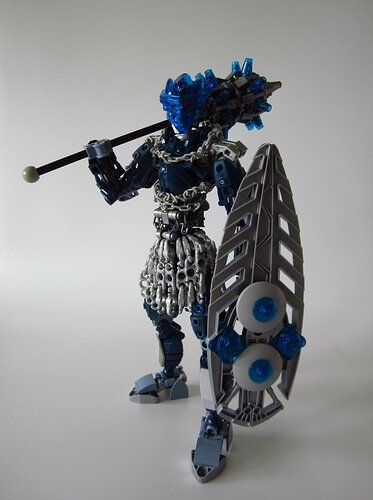 I don’t fully understand the mask/art portion but I used the trans-blue transparent mask of water from the LEGO Inside tour. It leaves the option open to even make it the canon appearance of her Mask of Psychometry without conflicting with other G1 masks. I’m fully aware it’s up to the next portion of the contest to see what happens to it. I know there have been resin replica’s of the mask so in the end its availability is not limited to the 250 of the inside tour.

I also added some aesthetic gears to match with the Toa Mata and Metru. They don’t work and are for appearances only. Her other shade of blue is sand blue because it hasn’t appeared in another Toa set so far iirc.

The side and back shot 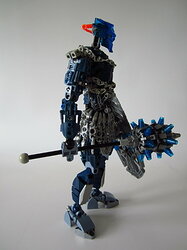 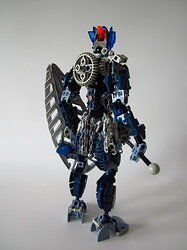 Some action poses. I’m not the best pose maker but she has almost the same articulation as a standard Inika build 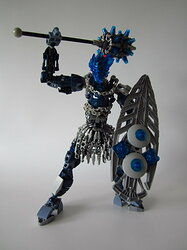 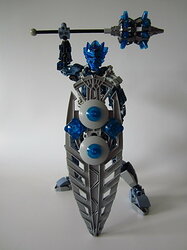 Here is she is without weapons and her chainmail armor 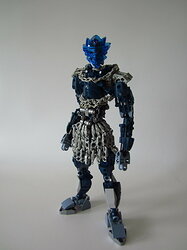 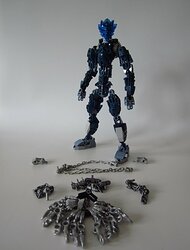 Full breakdown of her and her weapons can be found here https://imgur.com/a/6xq0HbM

Bruh this has instantly gone to my top 3! Amazing work! :o

Definitely one of the best I’ve seen out of all the submissions.

Definitely within my top 3 for the contest, wonderful build!

The way you used all those chains is just brilliant!

That is certainly one of the better maces I have seen.

Ooohhh, I really love the chainmail, that’s not something I’ve seen before.

Bruh this has instantly gone to my top 3! Amazing work! :o

I think this is the first time I’ve ever seen someone make literal chain mail out of bionicle pieces, but I love it! I think the mask would work better dark blue, but obviously painting that piece in particular would be heresy of the highest order, so no real complaints here!

Awesome work! This is one of my favorite entries. Overall a very sleek, well-proportioned design. I really like the use of the chainmail to add a little depth to the figure and contribute to the overall form.

The chainmail on this one is awesome. It looks strangely thin without it, but still one of my favorites.

Now this has got to be in my top 2 so far. I’m a big fan of the chains. It can be difficult sometimes to judge when is too much

but I think this really works. I’m torn on the mask’s design but it might work; the color definitely does. I must say though, that is definitely Helryx’s mace imo. Outstanding!

Great use of the chains! I also love how you did the mace!

Man, i believe this could be a super worthy toa tuyet (mask and all). Please submit it again then

I second this idea!

One of the best mocs of the contest.