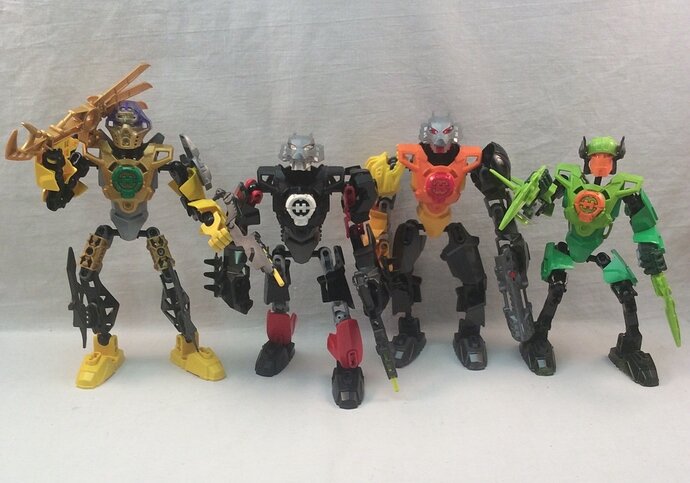 Glitcher-squad is, as can fairly easily be told just from seeing the members, composed only of heroes from the more ‘failed’ side of Herofactory.

Glitcher Squad was originally formed due to Onyx, who is also one of the more recently made ‘failed’ heroes in his team, after it was realized he, and the other members of his team both ‘got along’, quite a few of them having ‘clashing’ personalities with previous teams they’d attempted to be in, and they could all relatively compensate for the other members weaknesses, the former 3 having ‘resigned’ from previous team attempts by request due to ‘unfitting’ combative styles with the others. 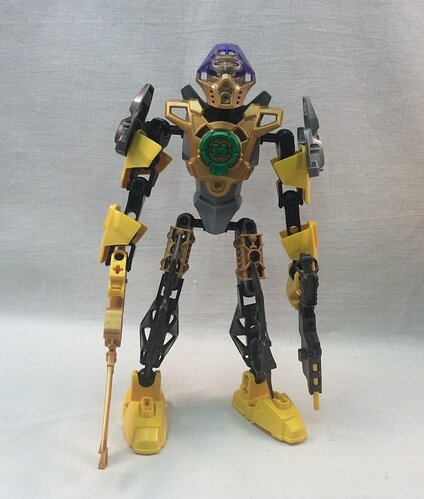 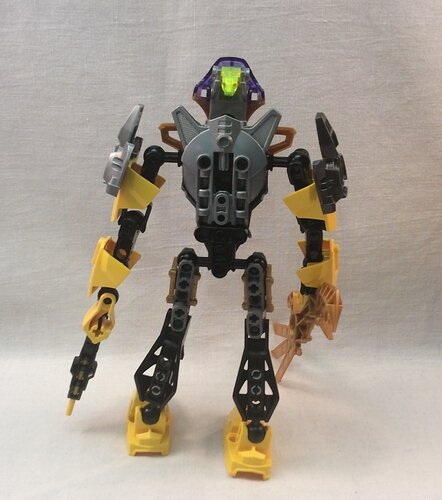 **Bio: Unopixx was originally a hero made to test out a more close-combat based/weaponized build, from his spiked knees to a blade that’s quite literally welded into place where his hand should be.
Unfortunately, while the build, and coding were a success, producing a hero with a weapon-heavy build and matching skill set, his personality, and un-considered drawbacks to his build are what ended up designating him as a ‘failed’ hero.

At first he had the makings of a ‘perfect’ hero, at least when on the field.
He used his build and in-built coding to their maximum use, able to block, and inflict multiple strikes at a rate much higher than the average hero.

It was when it came to a hero’s more ‘civilian’ based lifestyle that his flaws truly started to show.
From the need of training to develop a higher-than-average sense of physical self to avoid accidentally injuring others, requiring custom built furniture/related items to fit his weapon covered build, to the difficulties having only hand itself brought.

He quickly developed a more irritable mindset because of it, and, unfortunately for him, due to his own coding he required his build to stay the same or be out of commission for a long time to adapt himself to fighting without it, and change his coding naturally, or have it manually rewritten and risk himself being altered, damaged, or ‘deleted’.

He’s since learned to live with it, and despite his usual grumblings he does have to admit he enjoys the benefits his build provides. 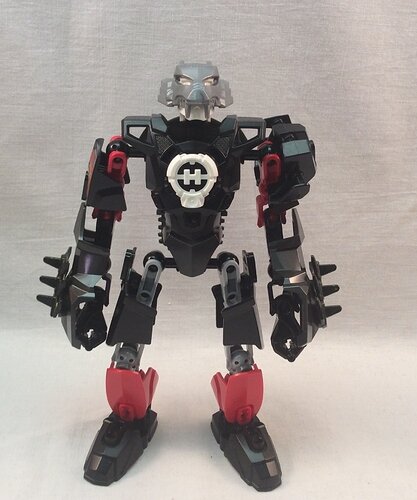 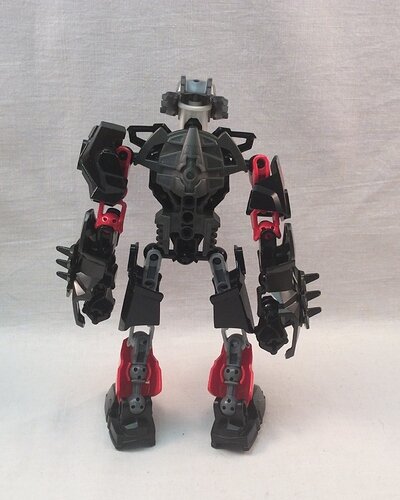 Bio: Onyx was designed to test out an internal cloak tech they’d come up with, his build based on a Brawler to try and design an ‘assassin’/scout type hero.

Unfortunately the calculations for the devices passive (and active) power-draw were off, draining enough energy that his ‘strength’ was highly decreased.

And, if that wasn’t enough, his own personality was, while friendly, one of a coward.
Easily scared, near perpetually nervous, and with some level of wariness for nigh everyone and everyone situation, which does actually make him quite a good scout, his mentality near perfectly ensuring he’d take no risks.

While nowhere near the level of combat ability he was built for, he does still retain that code and training, and spiked armour additions his brawler build was given, which make sure him quite an adept physical fighter when the comes to it.

He also can hide anywhere, from both his cloaking tech, to his wariness making him always try and not find, discover, and/or create little hidey-holes around the area (which does make him quite the effectiveness ambusher.)

He is the ‘founder’ of Glitcher-squad, mainly due to his own relief that despite being ‘defective’ they were just as useful as the others hero’s, want to prove such, and his own realization that’s there were ways each of them could help benefit/balances the others. 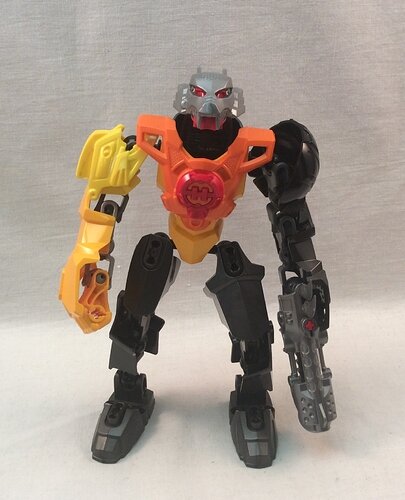 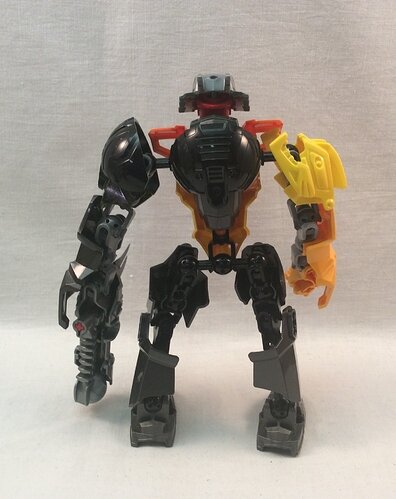 Bio: James is also on of the older heroes, made a few years before the Fire-lord’s attack and the upgrade that came with it.

James’ defectiveness comes from his build. Both from his own ‘modifications’, and the unrepairable damage it carries.

James was originally one of the happier hero’s, always with some quip or joke on hand, at least he was before he lost his rookie status.

It was a mission gone wrong that both caused him to lose his rookie status, and to gain his new one as a ‘defect’.

He, and his original team had been sent out on what was perceived as a routine villain capture mission.
Unfortunately it turned out not to be as ‘routine’ as was percieved.

Apparently a group of villains got it into their heads to try and ambush heroes by setting up ‘fake’ routine villain situations. James’ team was just the unlucky group that first encountered them.

They were quickly ambushed, nearly losing their ship, and quite a few of the other members, before James figured out a way to ‘save’ them.

He snuck off from the team, using the excuse of scouting due to their current ‘cat and mouse’ situation, distracting the villains long enough for his teammates to reach their ship, a false message he’d be there, before both his team realized he wasn’t there, and he managed to activate his plan, setting off an explosion they basically wiped out the villains, and took him with it.

Or at least that’s how it appeared until they found his near-dead corpse when another’s team was later sent to recover the villains bodies.

Due to his closeness to the explosion his damage was severe, from losing nearly 3 quarters of his form, to his Quaza quite literally cracking.

While they were able to rebuild his body, the only way to preserve his Quaza was by both limiting his repaired parts power draw, leaving them with slower, more robotic movements, and through an odd power-feedback/loop type of device they built in to keep his power from ‘leaking out’, but this also made it so he required a more ‘specialized’ way of recharging, both requiring his Quaza core to be physically connected to the recharge, and taking much longer.

His personality also suffered, becoming more cold and angry, quickly clashing with his old team after the upgrade and a request being placed, and accepted to ‘swap’ him out.

For quite a long time after that he worked alone, taking work He that’s wasnt suited for a single hero and succeeding in many of them, if taking increasing levels of damage. This also inspired him to learn how to repair himself, something he’s not the best in, yet, which can be seen by his differing knee placements.

Since joining the team his personalities… lightened, if only slightly.
Whiles still retains his usual ‘coldness’, he’s less angry than he was before, harder to irritate/enrage. 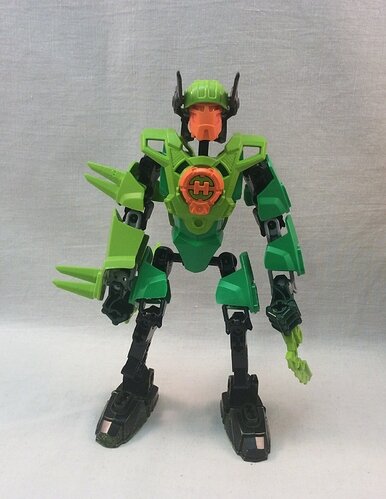 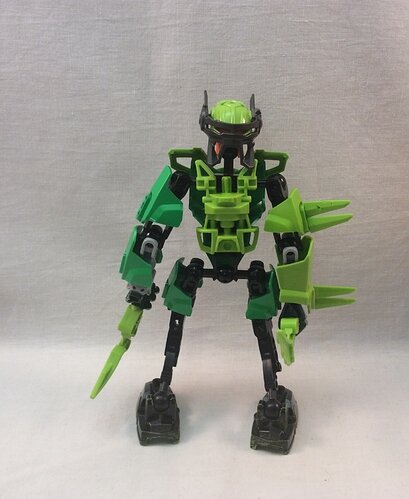 Bio: Jack is one of the both the oldest member of the team, and one of the first ‘defective’ hero’s, quite literally being one of the earliest made heroes at that.

He was made a few years or so into herofactory’s beginnings, when they were first starting out, getting used to the production, and general basis of the heroes and their designs.

He was also one of the larger reasons behind their current upgrade/build facilities and their large, open, and easily-accessible-in-case-of-emergency builds.

When he was made they were still testing their production facility designs.
He was made during the final test of a more compact version of the device, made to up the amount of heroes that could be produced at once by decreasing the amount of space needed to make a single one, allowing for more to be fit in said area

Unfortunately, during the test something went wrong, one of the devices exploding, and, due to the more compact build style, it was actually more difficult to gain access to the build-‘tubes’ that were in the most danger.

He was the only member of that line that lived, barely being removed before the other devices were set off from the explosion, causing widescale destruction in the test-facility and frying the other heroes that were being produced.
Even then he didn’t escaped uninjured.

A large amount of his form was damaged, especially his legs which and been caught in the brunt of the fire, barely being able to run, much less support himself.

The damage, when combined with their level of their repair abilities/tech at the time, and the discovery that that his Quaza core was, in essentiality, welded into his form, left him in a state where the only way to fully repair his damage would require a near full body replacement, which could ‘kill’ him. A risk he, nor they were willing to take, instead just repairing what they could, and rebuilding/restrengthening his legs as much as they could.
Another scientist actually figure s out how to give his legs a sort of ‘jump boost’ later on.

Since then even more of his bodies been repaired as the upgrades come out, but his legs, and much of his original body remain the same, the upgrades having just been ‘adapted’ for use by his form, and at this point he doesn’t really mind, being quite adept at utilizing his ‘jump boost’ in his fighting style.

Despite his old age he acts quite young.
From his personality, mentality, and the references/lingo he somehow always manages to get access to and learn, he’s nigh-eternally young at heart.

Colors are inconsistent, the shaping and pieces used are… not quite well thought out…
The backstory, names, and general concept is good, but it could use some work.

Eh, mainly just trying to see what I can build with my very limited collection of G2 pieces, but I do agree that, even for just basic HF builds, they could use quite a bit more work.

Glad to see I got the stroy/idea across well enough at least.