'Ello again people! I know this has been long time, again, but anyways, I post here my very first Hero Mech where I started. Shall I introduce, Evo XL Machine! 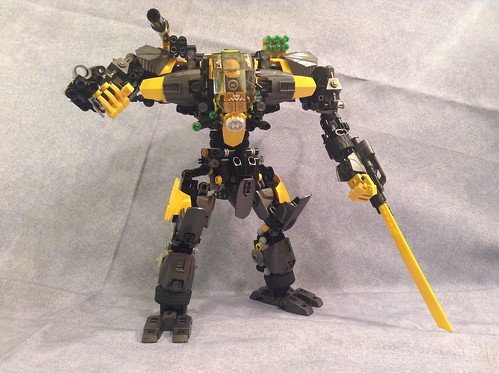 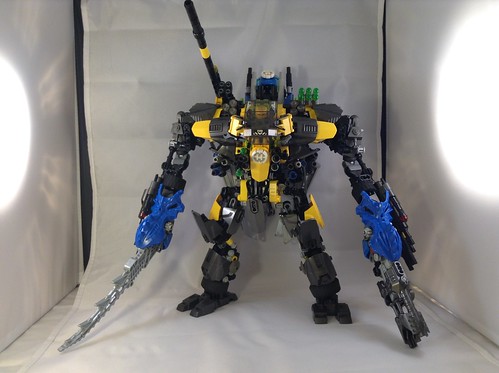 Well, when I got this set, it wasn't bad, but it lacked some that wasn't pleasure for me. The wrist, the ankles, they didn't have any articulation, okay kinda with wrist but the ankles, nope. Because how the legs were designed, it suffered from no ankle articulation problem. And the left hand, with tiny fingers... nope.

Okay, in reality, I started to build this "pre-redesign" version of xl mech, which was a good thing. I decided to give him a second arm and adding those machine gun rifles on to xl mech's arms. I gave some extra firepower on to xl mech's upper area and replacing this odd satellite dish away (because it was so random, kinda) with mortar cannon and some kind of a secondary weapon also (no I don't mean those rocke pods, the other one). And the mech was mostly filled up with technic parts.

The combined form I just decided randomly. Because I was thinking about Rocka's jet flyer thingy, I was thinking: "What if." The idea I got it from Digimon Omnimon digimon because how cool it was, and decided to borrow the arm area elements, and utulizing those DB head parts worked well!

I'm pretty much happy about this MOC how it turned out! That's all!

Oh, I forgot to show something!

TumblrYoutubeFlickr Kiriban Prize for MrBoltTron I hope I did it justice, I don't usually paint bulky things like this mech ^^"

Kiriban prize, based on my revamped combined mech!

mine just peed its pants..

Evo's Mech was my favorite of all the IFB mechs.