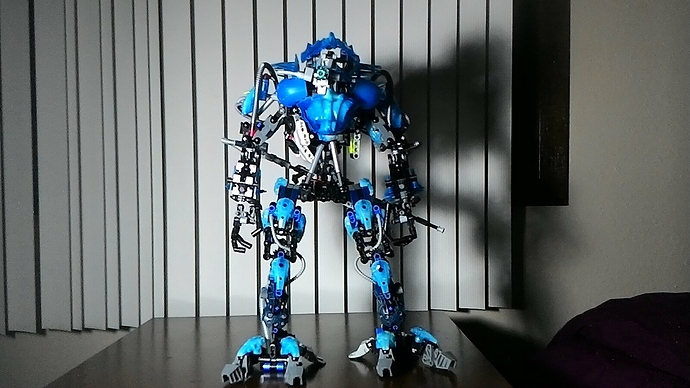 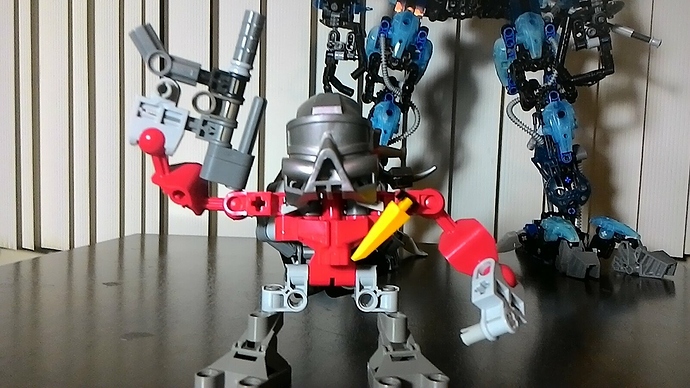 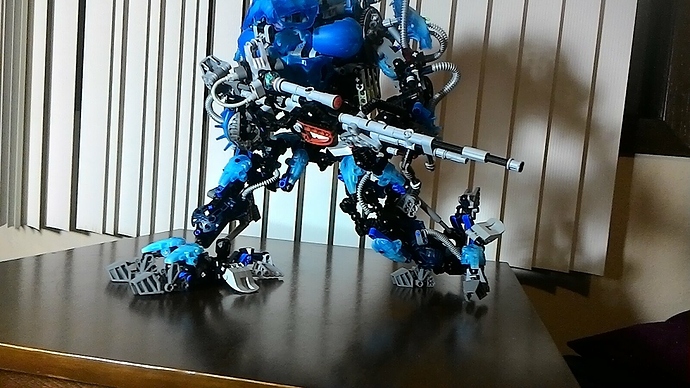 This is a MOC I have been working on since Titanfall 2 came out, I wanted to make a Mech suit that functioned in a similar way. I used a custom Technic build for the body, and surrounded it with Gadunka shells. After seeing how good this looked, I decided to use the glow in the dark parts for the whole color scheme. After building the base Mech, I wanted to make him a little more accurate to the game. I decided to model him after a Vanguard Class Titan, like the kind you pilot in the main game. The Vanguards have 3 batteries, which glow green, that are clicked into their sides. I made sure to emulate this as well as I could. After that, I wanted to make his rifle. I gave him a sniper rifle, since that’s what I use in the game the most. The ammo can be removed, and he has extra ammunition storage on his right side.The stock of the rifle can also extend.The sniper rifle can also be stored on his lower back like so- After I was proud of the finished product, it was time to turn my attention to the Pilot. I wanted to base him as closely as I could to my in-game loadout, and I think I did an okay job. I gave him a grappling hook, made from an old ■■■■■■■■■ hose piece, and he has a thruster pack on his lower back. He also has frag grenades with pullable pins, and extra ammo for his SMG. Weapons wise, he has a rocket launcher and an SMG, the SMG has an extensible stock, and both weapons can be stowed on his back if the other is in use. He also has an orange knife that simply serves as an homage to the Data Knife. Otherwise, he is a MoLToran build. When it comes to putting the pilot into the Mech, first you must take his weapons and place them inside a specialized compartment in the back of the titan. Next, you place the Pilot into the opening at the front.Lift the first Gadunka panel, and flip up the blue Nocturn head that I use as simulated face protection. Next, pull the last panel down, and position the eye of the Mech as desired. The pupil of the Mech also glows in the dark. I don’t have a camera that can pick up the lighting very well though. Here are a few more pictures of little bits I’m proud of- If this gets featured in a MOC spotlight before Christmas, I would like for it to be noted that on the Bionicle Community Group Facebook Page, I am hosting a MOC challenge for other people who would like to build and submit their own Mechs. The details are located [here] (https://www.■■■■■■■■■■■■■■■■■■■■■■■■■■■■■■■■■■■■■■■■■■■■■■/995107653969273/?hc_location=ufi). I also have a Youtube (youtube.com/smellslikechannel) where I post occasionally about bionicle related things, such as the Journey to One Makuta Instructions, which I uploaded and also Live Streamed.

The MOC looks pretty cool.
But how many of those takadox glow in the dark pieces do you have!?!

Quite a few, sir!

That combat matoran fits right in.

Pretty cool, I like the choice of trans blue and glow in the dark elements.

It looks overall very messy, a lot of the texturing makes it difficult to make out.

I linked to a facebook gallery of the moc with a lot of closeups, I know the lighting was not the best.

Cool mech but I honestly think that the Matoran steals the show here. I love its color scheme.

I can’t say for certain if this is a very accurate representation of the Titanfall mechs, but either way it looks really good, definitely looks like machine rather than another person, which is an issue I have with some people’s MOCs.