Posting a MOC here, seeing as I haven’t posted since January! In fact, I started this a week after I posted Anubis, God of Judgment.

The all-famous Ancient Egyptian God of Skies, the Sun, and War. 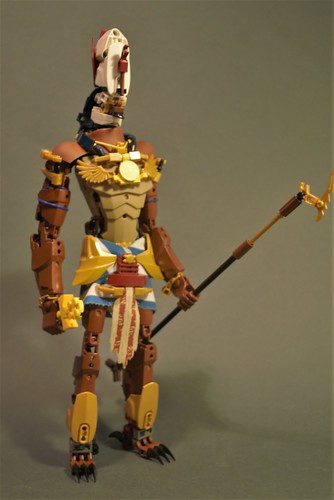 One of my favorite mythological deities (not least because of my origin, mind you :P). For as long as I have been MOCing, I’ve always tried to render Horus in whatever way my imagination would let me. It wasn’t until recently that I decided to try my hand at a more classical interpretation, which I think turned out quite well.

He’s meant to be wearing the Crown of the Kingdom. It was a bipartite crown, made of the crowns of Upper and Lower Egypt, celebrating the unification of both ancient Kingdoms.

More photos in the future!

This. I like this. I’ve always been a sucker for Egyptian mythology.

I like how this actually looks more organic and human. Nice touch with the pirate flag for the cloth as well.

It iz I, Horus, Egyptian god of ze sun!

I like it, but I feel like the rubber bands on the arms could be a better color

The proportions are a little odd, but besides that, this is stellar. I love all the details, and the head is interesting as well.

A solid representation. It overall captures his vigor and spirit without feeling too proportionally awkward. The thighs being an exception. It may just be the angle, but something about the thighs looks off when compared to the arms.

I think any constraction creation that doesn’t make any human look awkward is a great one in my book. The flesh areas fit in very well.

This represents an impressive use of the old Ben 10 parts and it pays off here. The MOC looks uniquely organic, and I love the detail of the gold ornaments on the chest.

Since I like most things Egypt I like this Moc, my only problem with it is the fact that Horus’ head is um besides the crown, bad. The head itself baraly resembles a falcon or eagle. It like a bit to mondensed. The head also looks like a puffin for some reason. Bet geat moc, this is a really good representation of lego Horus.

EVERYTHING YOU DO IS INCREDIBLE

but srsly tho this is wondrous, keep up the good work

While majority of us are impress by the moc apperance, one thing that stood out for me is that the moc use majority of Humungousaur pieces, the integration is cleverly used.

The bird face is rather small, but get the job done.

This turned out so nicely, and the way the Humungousaur’s pieces are used is ingenious.

No words other than amazing. The cloth really helps here. Good job!

Man, this moc is great. I enjoy how you managed to use the Ben 10 pieces on the moc. I think the shaping is wonderful and how the moc manages to convey an organic and human feeling.