How did Barraki look before mutation?

So my question is guys, how did Barraki look before the Great Cataclysm and their mutation? I don't know if they were size of Toa or something bigger and more epic like Brutaka or Hydraxon.

The white is Pridak, and the one red at the beginning is Kalmah
I think they were Toa sized, 'cause their pit form was in that size too

I watched it whole and that's reason of this topic cuz that movie is not canon as whole and the sets are also how the creator thinks they looked like. And I know they propably didn't have any kanohi masks so the creations in movie are just kinda placeholders.

I think it's not in the story how they looked. Maybe ask Farhstey on the forums?

Wouldn't be surprised if it turned out something like this; 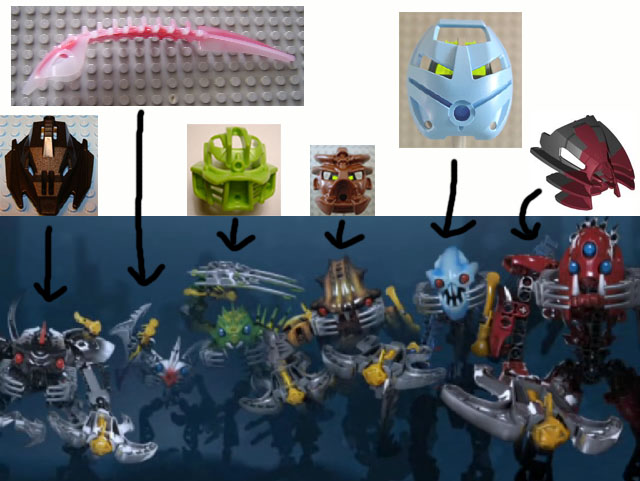 I think it's not in the story how they looked. Maybe ask Farhstey on the forums?

Though this is probably more advisable ^

They were noble beings, as fair to look upon as they were evil.

At least. That's how I imagine them

Ehlek looked pretty much the same before. That, at least, I know.

He would say he doesn't imagine things visually.

I recall Kalmah saying in one of the comics that they used to be beautiful creatures. I'd imagine something like a Toa but I think ruling a kingdom or something. I sort of forget what happens in the comics.

I don't think they wore Kanohi. They were different species and were unable to wear Kanohi, and probably wouldn't resemble masks either.

My canon begs to differ.
I read somewhere that they could use Kanohi but were too prideful to rely on them. I can look that up again...

I'm not actually sure either, I'll look it up on BioSector 01...

It would have been really cool if LEGO had done a building contest for what the Barraki looked like originally.

They had mental capacity for using them but they jus didn't want to cuz they thought that is just a piece of junk...

What sane being rejects being able to wear a mask that gives you powers as junk?

The only one we know for certian is Ehlek. I recall it being said that since Ehlek was already and underwater species his mutation only gave him the spikes on his back and electricity powers. (Which makes me wonder why he ever wanted to be cured in the first place.)

As for the others, everything's up to your own headcanon. The only thing we can logically assume is that they (probably) retained their original colors and were about toa sized beings.

I like to think that they relatively retain their original forms were similar to their mutated ones minus the underwater traits, with some exceptions. So Kalmah with a different head, no tentacles, or webbed feet. Mantax would be hunchbacked like Onua Mata/Nuva. Takadox would still be skinny but in more humanoid silhouette. Also, I always saw Pridak having a very idealized and handsome form. Think of a shinning knight but evil.

I also think it would be cool if they had powers that they lost after mutating. It goes against canon but it would make sense considering the world of BIONICLE has people with powers left and right.

The only one we know for certian is Ehlek. I recall it being said that since Ehlek was already and underwater species his mutation only gave him the spikes on his back and electricity powers. (Which makes me wonder why he ever wanted to be cured in the first place.)

I think they were more titan sized so ehlek would just retain his physical strength. He was propably on of most handsome ones from his species and this form was ugly even for them.

Ugly is the only description necessary

The mutation probably improved them.