How does Lego decide which molds to keep and which to destroy?

Earlier today, I saw DuckBricks’s video on rare Lego animals and learned that the goat is not only one of the most expensive animals on the aftermarket (and according to Duck’s metrics, the most expensive other than dragons), but that particular mold was confirmed by a Lego employee to have been destroyed. That reignited a question that I still can’t wrap my head around, which is the title of this post.

Essentially, I bring it up because, if there is a logic behind it, I don’t get it. For example, the Guurahk Staff was last seen in 2010 before returning in 2015 and the Skrall armor was reintroduced in 2016 after a four year break. For a non-constraction example, Woody had extra tall legs that were created just for him and Jessie in 2010 that were last seen in 2011 (and were not used in the Toy Story 4 versions of those minifigures in 2019) until Avatar of all things reintroduced that size in 2022.

So yeah, who makes those decisions and what’s the method to their madness?

Every month, 32 Lego employees are chosen and told to pick their least favorite piece each from a Lego set in the past two waves. Then they play a big checkers tournament. The winner gets to destroy the mold for whatever piece he or she chose.

For a non-constraction example, Woody had extra tall legs that were created just for him and Jessie in 2010 that were last seen in 2011 (and were not used in the Toy Story 4 versions of those minifigures in 2019) until Avatar of all things reintroduced that size in 2022.

Those legs are pretty generic, while something like the goat might not be. It’s also possible that the molds for the tall legs was destroyed, but they remade it; the tall legs are a very formulaic piece, so it wouldn’t be hard to make it identical.

Maybe so, but that doesn’t explain more detailed parts that I would guess would’ve been destroyed after a certain number of years like the Guurahk staff.

In this day and age of 3d modeling, it’s probably not hard to recreate a mold for a given piece. Tons of people are already doing that to add the old constraction parts to things like Stud.io.

I’d say it’s quite likely that the goat model still exists as a 3d model somewhere in lego, so if they ever decide to make another prefab lego goat, they could remake the mold.

Yes, the Woody legs were destroyed, the Avatar legs have slight differences.

Depends on which mold talks back.

I believe lego does a piece purge, could be wrong as I have no clue where I got this information from.

Wow the goat mold was destroyed? That’s why people are so up in arms about there being no goat? Huh.

I would figure Willess is on to something with them being able to remake molds with 3D modelling these days, and it’s not like they manually adjust the physical molds when they’ve made the countless slight tweaks to basic 3001 or 3003 bricks even though those still hold the same IDs that they’ve had probably since design IDs were introduced.

Something that your picture shows too, is that the hands seems to have been made more thinner. Is it only applied for the Na’vi/Avatar’s aliens or is it the same for all minifigures ?

yo where you learn this, i wanna read more about the process if possible

i wished it was true

Yes, the Woody legs were destroyed, the Avatar legs have slight differences.

I may have just found another example of Lego remaking a mold: 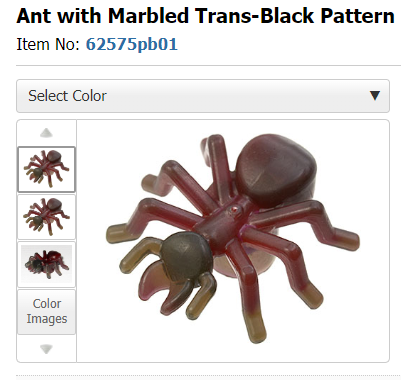 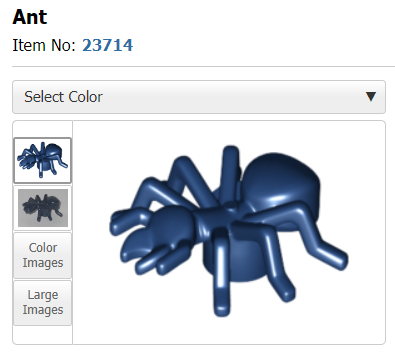 The marbled ant was only used in 2 sets in 2008, while the solid-coloured ant came in a single set in 2015. I find it interesting that, despite looking identical, the solid ant uses a different part number, even ignoring the “pb01” tag for the marbled version.

Every year, the CEO at LEGO calls TTV. The conversation usually goes like this:

“Hey there TTV crew, what pieces are your users most nostalgic over?”

“They tend to talk a lot about (insert BIONICLE piece here)”

“Thanks, we’ll get rid of those pronto.”

Who said they like the goat? I’m not mad, I just wanna know.