On the page advertising the uniting function, showing all of the Toa united with their creatures, I looked at the background. You can see the Labyrinth of control, or what I’m assuming is the LoC anyway. At the far right is what you might at first assume to be Gali-Akida; BUT, the shoulders are wrong. This is, in fact, none of the Winter sets. This person is not visible in Kopaka’s, since his shield is in the way. Near the top, you can see Lewa-Uxar or possibly Umarak-Uxar, too hard to tell. Behind him, though, is a… lizard(?) thing. I’m not sure what this thing is, but it’s not any of the Toa, Umarak, or creatures. At the right, you can see Pohatu-Ketar(only in Kopaka’s) and Kopaka hanging from something (it’s impossible to tell if Melum is present, but we can assume he is). Near the bottom left on the Creature instructions, you can see Onua-Terak and a shadow trap.

Onua, Kopaka, Pohatu, and maybe Lewa are present. That leaves Tahu and Gali, but neither mystery figure is Tahu, Gali, or Umarak. The far left figure could almost be Gali but for the shoulders, but the Lizard thing is not Tahu. I’m willing to bet it’s a beast.

Sadly, the united figures and the app ad prevents us from seeing the full picture, so that’s all I can say for now.

So, the mystery figures are Lewa’s shadow trap and Gali. HOWEVER, Ikir and Tahu are the only two not combined. This may give us some hint to the story. Maybe Tahu and Ikir combine last? LEGO does tend to make the red guys ged power last (Vakama’s mask power, Kai’s full potential)

Interesting development…what were the beast powers again? Quake, Storm, and…I forget. Can we match anything to what it might be?

I noticed this too and it is interesting how there are those unrecognizable characters. Is there a chance it could be a special edition character similar to the hagah in 05 that has been kept under raps. This wouldn’t honestly suprise me since Lego has done a good job of keeping secrets until just before they are revealed?

After looking through the manuals the figure on the left is definitely Gali and Akida, personally I think the shoulders and Vorox armor silohette is the giveaway but if you’re not convinced there’s also the propeller spear she carries.

The “lizard-thing” is actually Uxar’s bear trap. In some labyrinth pictures you can also see Terak’s and Ikir’s bear trap as well.

I thought so, but I wasn’t sure!

Image?
(It’s not leaked…it was released officially by LEGO as it is in an existing set)

Sorry, They are all 2016 Toa fighting Umarak and the Shadow traps.

You can see this much more clearly on Umarak’s box art, but its definitely Tahu

Once again, very clear on the box-art of Umarak, this is Kopaka

Tahu is accounted for as the only other character who could have wings and he’s seen clearly with Kopaka. The Box-art for Lewa also lacks this character shown on the area, so its definitely Lewa.

This is definitely Gali and Akida, you can see it in much better detail on Umarak’s box. She has the spinner on the staff.

Seen a few people mistake this, but its definitely a shadow trap heading for Lewa. Focus on the end and you can see that its actually in mid-jump with the chain following it. To add to the proof that it’s Lewa, its actually his shadow trap with the vine legs. 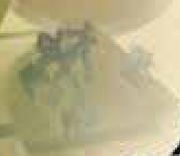 Don’t really need to explain this one, the giant hammer, pose and combination with Terak should be enough on their own. 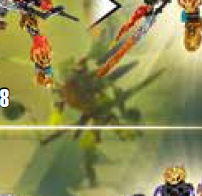 Once again, this one is clearly Pohatu and Ketar.

The Box-art and Instructions were meant to show the Toa and Umarak as they travel through the maze. This is not the 2016 stuff and i can verify a majority of this with better images if requested as i have the box-art verifying the Gali image and Lewa image if requested.

The only unnacounted for thing is something hidden behind one of Umarak’s horns (interior on his left side - front of box art) which appears to be a shadow trap leaping at something hidden - which I’d guess is the space Ekimu would probably be, given he is still travelling with the Toa yet doesn’t currently have a 2016 updated form, hence being hidden.

just not the summer stuff.
But yeah, you have a point. Well, several, actually.

That’s clearly visible in his instructions. Sorry, but it’s only Ikir.

Although, it is strange that Ikir is not with Tahu, since all the others are combined.