I want some advise/help with my Bionicle G2 creation

Ok, i have mentiond it before so here is the idea for a moc i am planning on creating.

The character is sort of based on Raziel from the Legacy of Kain franchise. He thus have the ability to travel to both the real world (Okoto) and the Shadow Realm. However, he has no memory of his own past, nor does he know what he is. He is not a skull villain, he is not an Okotoan, and he has no memory of the mask makers.

now, here is the main thing i have a problem with, the design.

you all see, i have not a complete idea on what he should look like, i have been thinking of giving him Umarak the Hunter’s leg design as a start, but i thought that would just make him to similar to Umarak, so i also though of giving him the leg design of Quake Beast, or just give him the normal Toa leg designs.

now the mask, i have been thinking on being a repainted Hunter mask, i even though of a color for it: 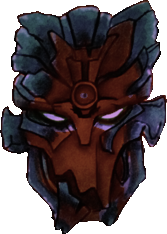 credits for the Hunter mask drawing goes to @Jhanz 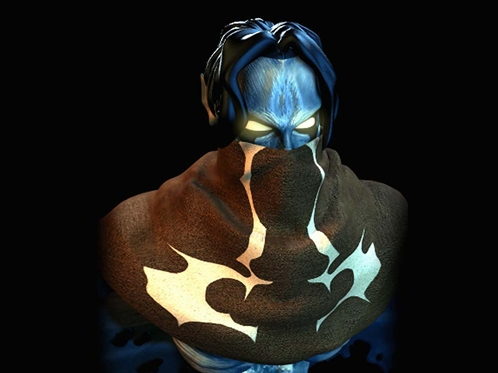 im also planning on giving him a sword, i think i will also give him the same type of scabbard that Umarak the Hunter uses, but im still puzzeld on the design of the sword.

so… do any of you have any advice? i really want some help with this, but im not going to make it some complex moc, because im planning to show this moc to the Unofficial TTV Bionicle Continuation Topic.

also, do anyone have a good name for this character? 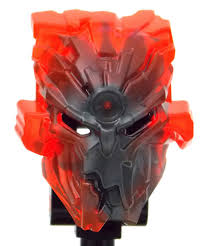 no, you see, i want to have the mask be uniqe in color.

also, some of the other things im puzzled on adding to the character is weather or not i should give him the transparent green beast head with a colored eye stalk, or just use a normal gray head instead.

In that case… Well, I suppose I recommend not making him essentially a color swap of Umarak . If you’re looking to pitch this guy to a fan continuation project, you probably want to make him a bit more original.

If you’re looking to pitch this guy to a fan continuation project, you probably want to make him a bit more original.

well i don’t have a 3d printer, i could allways have him use some villager mask and just say its something he just found some where and started to use.

but i should have a new design for him, just hope that i can find someone who could print the mask if i ever make one for him.

I don’t mean just the mask; actually it would probably be a fine choice, seeing as you plan to cover part of it.

But like, the digitigrade legs and sword sheath, along with the mask seem a bit too similar.

Come to think of it, it’s not really that he’ll absolutely look like umarak given what you’ve stated, so much as many of the few things that you’ve talked about are reminiscent of him. You haven’t mentioned that many things unique to him, so much as stated what will be similar to other builds.

I guess that just kind of means there isn’t much to work with… I’d recommend just building a prototype moc and posting it- then I(and anyone else) can properly critique it.

im planning on buying as many G2 sets (plus a Grievous set) as i can so that i can build a moc with them.

im thinking on using the Ekimu the Mask Maker torso build, because the character is going to have a sword.

The mask however, im going to draw up so that someone can 3d print it. (that is if someone could)

Hey thanks for using my drawing!
I don’t think I have much good advice for the construction, but I did think of two names ideas;

also, the reason i have desited on the Ekimu torso, is because the upper gear function would be used for Ou’a’s weapon which is going to be a sword (the design i have not come up with yet), but the sword will also be able to be stored in a similar scabbard design that Umarak uses (because i like the idea to store weapons on a constraction figure) the lower gear function (the 2016 torso function) would be for Ou’a’s second metod of attack, which is his claws, similar to Raziel.

the claws would be designed like Quake Beast’s claws.

Also, unlike Raziel, Ou’a won’t have tatern wings or something that is like wings, im instead going to give him something like a normal cape… i think…

im starting to have a good enough idea for how i will build Ou’a, i just need a good enough collection of peices (im not going to deconstruct my G2 Bionicle sets, because i want them to be the way they are)

im going to use a gray rib armor for the lower armor part and maybe the upper Basher torso armor, im going to use some skull limbs and the short feets that where used on skull slicer, the warriors and the protectors.

and i will also use the Transparent Beast heads.

Personally I feel like you shouldn’t just copy designs off the sets, but that’s up to you and your collection. If you want him to give off a wanderer vibe though, try getting some scrap cloth and cutting up a bit, then drape it across the model in various areas.

here is his current design, from the peices that i have used from my resently bought sets: 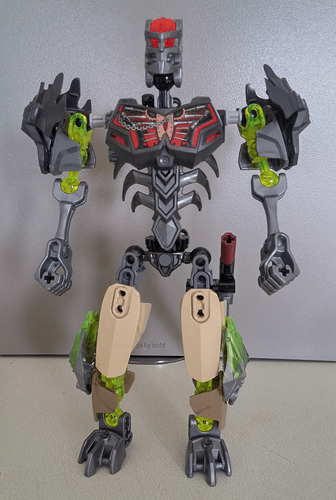 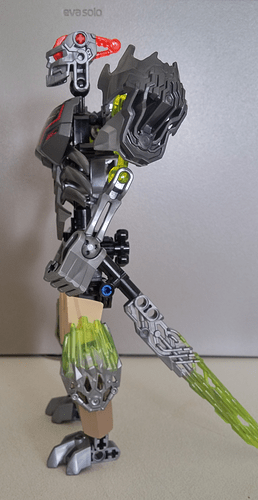 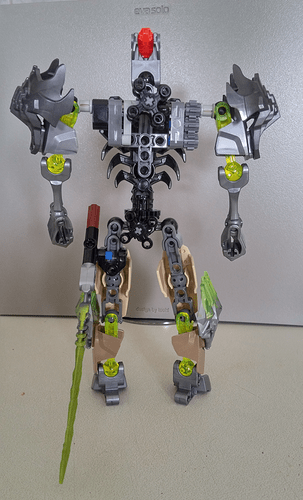 so as you all can see, there are a good number of things that i did not add to this character:

the cloth peices i have not made yet, but i do have some black capes from Kylo Ren’s figure, i just don’t know how to add capes on the figure.

so, do anyone have any way to help me? Im planning on maybe getting another Umarak the Destroyer for the transparent head.

It’s pretty generic and the colors could stand to be distributed a bit better. Right now you’ve got a lot of tans in the legs but nowhere else, really. Also the shoulders are really wide. Too wide, I’d say.

i have updated Ou’a’s design a little: 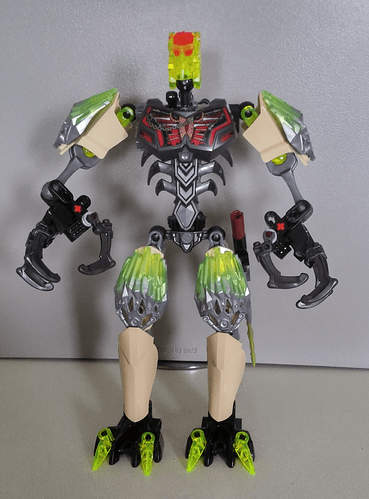 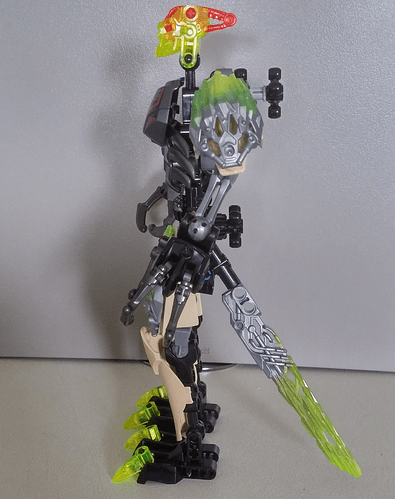 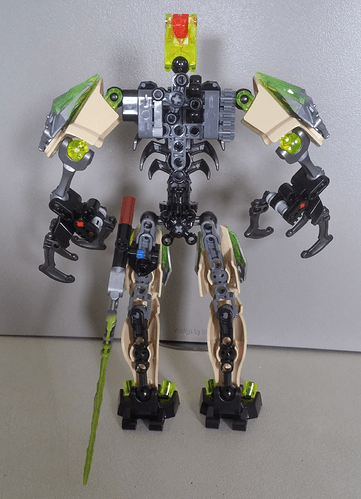 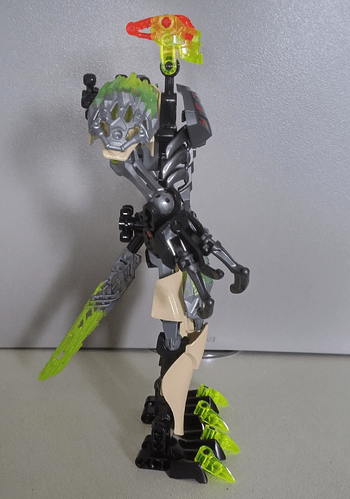 as you can all see, he now have his green transparent head, his claws and new legs.

also i found a way to have his claws hold the swords: 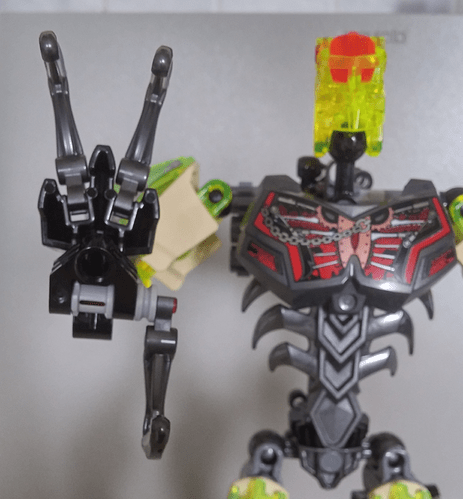 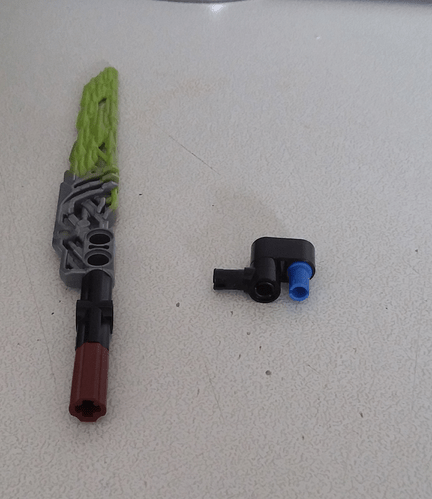 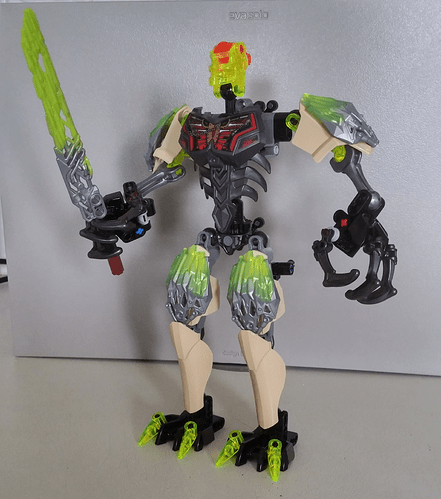 I also have some crossguard designs for Ou’a’s swords, but they are still only a consept because i still don’t know how to make an alternate sword design: 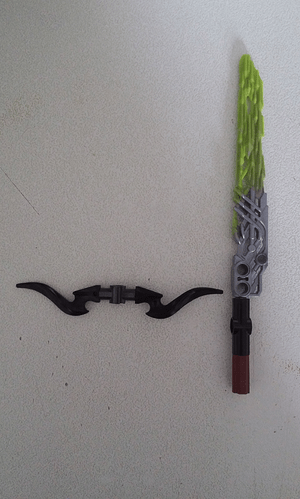 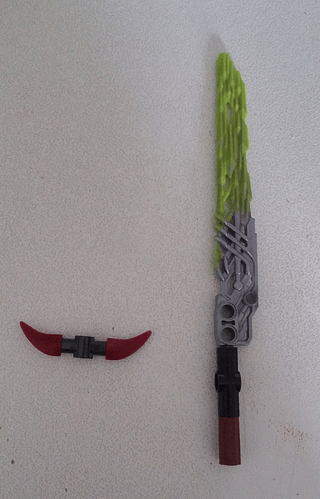 I know that you’re going for a very neutral and mysterious character, I get that.

But the whole not knowing your past and being able to freely travel dimensions is a little far fetched for a Bionicle character. It doesn’t help that he has no ties to Okoto, the Mask Makers, or the Toa. If he’s got no memory, at least make it so he’s got some tie to something. Given your inspiration, is this an original character or is this just Raziel in a Bionicle form?

Given your inspiration, is this an original character or is this just Raziel in a Bionicle form?

he is meant to be a more original character, thing is with my ideas and consepts, is that when i base something on someone elses work, i first start with something that is similar to that, and as time goes on and i think about more ideas, the idea of the character grows and alters from what it was based on. 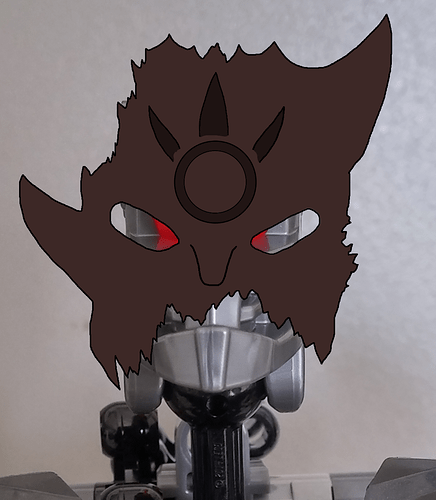 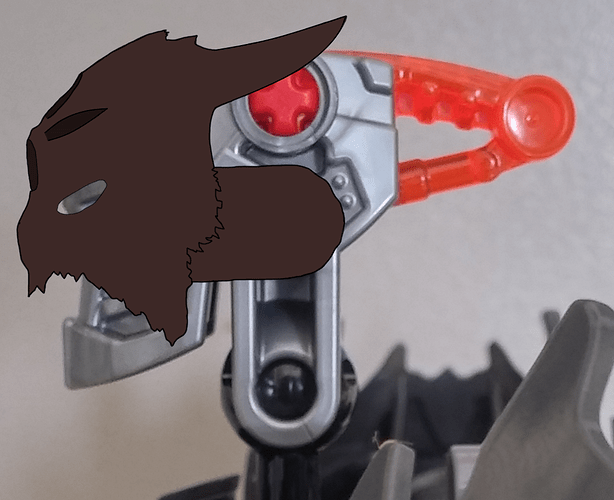 the mask still some what works, its just that the dimension travel is temporary, like if Makuta tried to use the mask, he would only be back on Okoto for a few hours before he is then transported back to the Shadow realm against his will.

I gotta say, that mask is super cool

also, i have slightly alterd Ou’a’s design again, mostly minor things like removing the star wars shin armor from his legs and giving his hands a more stable peice that makes it less likely for the thumbs to woble around, though im open for more suggestions, also im working on the swords, using a similar design to Kopaka’s uniter sword, though with some tweeks, but its still not complete because im missing one or two peices.

oh, and the mask missing its lower portion is based on Raziel missing his jaw: 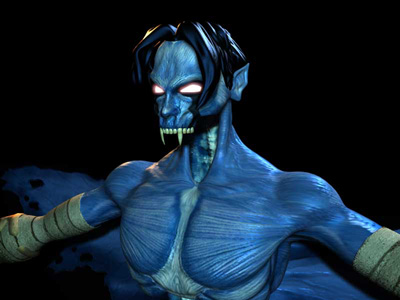