One of the oldest toa in existence, and one of the least understood, Ia’s powers of shadow and trickery spread superstition and distrust in their wake.

Ia was one of the first matoran to be made by the machinery of the Matoran Universe itself (not by the Great Beings). She lived on the Northern Continent, and came to know new matoran and new rahi species as they gradually populated the vast, mountainous expanses of her homeland.

Ia was turned into a toa so long ago she has forgotten how it happened, though the experience was traumatic - Ia was caught in a volcanic eruption in which searing hot energised protodermis lashed out at her and transformed her. Despite the transformation, she was still burned, broken and fell unconscious soon after from inhaling the fumes, but was able to seek help in spirit form through the use of her Iden.

She awoke to find Krika looking her over. Needing time to heal, she was encouraged to stay for a while with the uncommonly friendly makuta, and observed him at work designing new rahi. Krika helped train her to use her new grasp of Psionics by creating rahi for her to practice on, as well as teaching her some secrets of Shadow manipulation usually only used by makuta, such as creating shadowy wings for flight.

Ia would later answer Mata-Nui’s summons to the holy island of Korrothis, situated under the Great Spirit Robot’s heartlight. While the Elemental Council formed, a team of guardian toa known as the Toa Korroth also formed. Their mission was to be the more militant arm of Korrothis, and combat threats to the universe as a whole wherever they might be, in Mata-Nui’s name. Many toa came and went from this team, but Ia always stayed among them, eventually coming to lead the team.

After the Great Cataclysm, Ia saw three of her team-mates sacrifice themselves to maintain the balance of life and death in the Matoran Universe. With Mata-Nui fallen and three of their number gone, the Toa Korroth disbanded and joined the ranks of lesser toa (archons) who answered to specific members of the Elemental Council.

Under the Kra-Nui Nivorn, Ia underwent a dangerous spacefaring mission to explore the Solis Magna system, but was lost with the rest of the crew of The Tomorrow on Bota Magna.


Ia was created in October 2011 as part of a MOC-off with my friend Ben Cossy. She was also a character in a roleplayed story a while before that, which is where The Tomorrow came in. Sadly the story didn’t get much further than the crash on Bota Magna before we stopped RPing.

She was heavily inspired by this MOC, and borrows this foot design from Xinlo. I was experimenting a lot with designs at this stage… I had set out to create a senior looking, experienced toa with a more ornamental look to her armour, and to try and deviate away from the female torso design I was using at the time, which was becoming overused by that point.

Her weapon is a trident despite her not being a water toa, because it’s meant to resemble the Greek letter Psi: ψ which tends to be used as a symbol for psychology and so on and so forth.

Love the use of those windshield pieces coming off her back.

Very cool.
It has this sort of mage-lancer look that I can’t help but like.

Definitely unique in the good way.

really nice moc. I really like her back story mostly because Krika is one of my favorite characters. 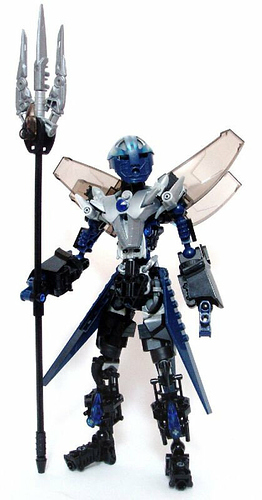 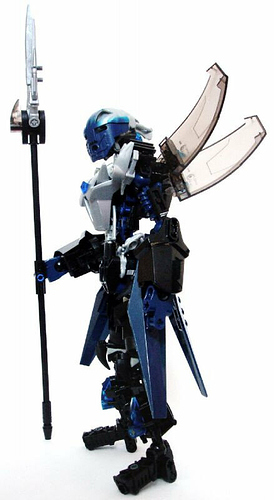 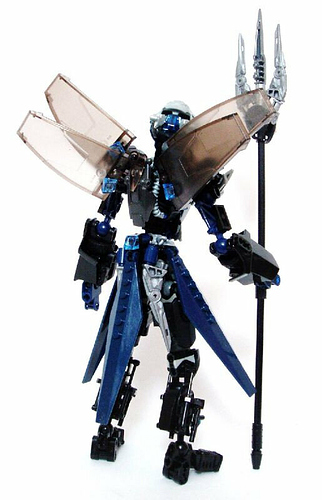 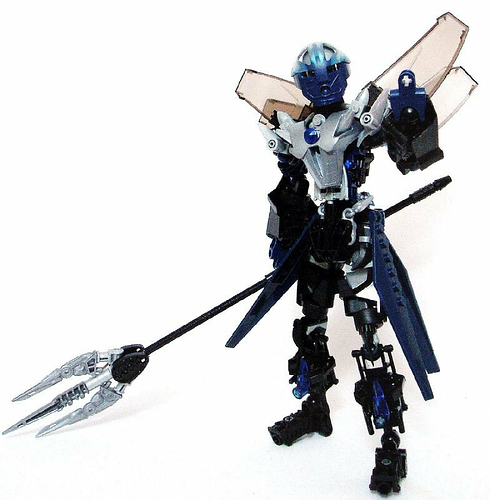 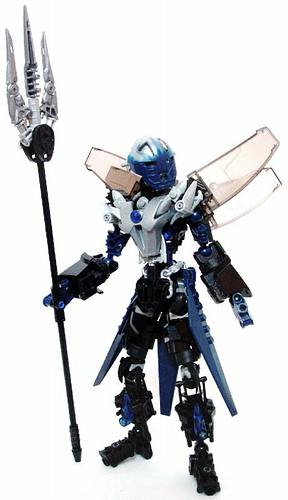