I LOVE RICK AND MORTY 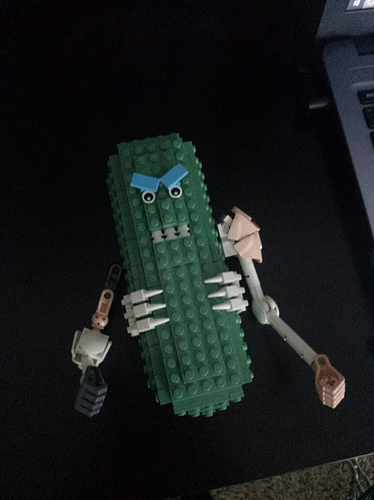 It even made way to the Message Boards, nowhere is it now officially safe.

The memes are killing me. I almost want to make some dumb joke, but I don’t want to give in to this insane fan base. Anyways, not bad, but he could use some legs. Also his right arm looks a little skimpy compared to the left. Overall, a nifty little MOC.

Also his right arm looks a little skimpy compared to the left.

To be fair, that’s how it is in the show as well.

I never really noticed it.

I hate R&M, but I’m going to say this looks accurate, and I kinda like it, I’d probably like it more if it wasnt from this show

The MOC is ok, I imagine it’s hard to make a pickle out of lego bricks

There’s just no stopping you Alex. You’re too good; moving at unbelievable speeds with these revolutionary builds. I enjoy Mocists like you who challenge the community. Keep up the amazing work.

The MOC is okay…

But you have better things to do with your life/free time, don’t you think?

I like the show, but god, this joke got so old after the first million times I heard it.

PICKLE RICK! Oh god, that was so dumb it was awesome. well done

I have been an avid Rick and Morty fan for a while now… but the pickle Rick joke was a one-off thing that they turned into a whole episode, and so many people went with the joke that at this point it just hurts to hear it anymore.

It’s kinda like Solek jokes, but instead of the remnants of the Bionicle fanbase, it’s the Rick and Morty fanbase at it’s zenith.