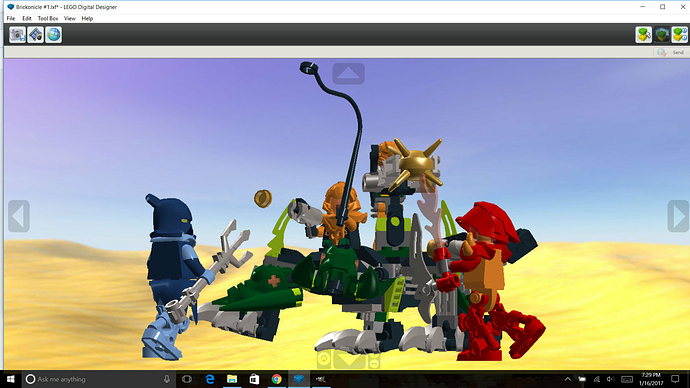 The remnants of the Iron Tribe are attacking Bara Magna! Only the valiant glatorian, Kiina and Ackar, dare to stand in their way! Armed with thronax launchers and their weapon of choice, will our heroes prevail over the greed of Sahmad and Telluris - the last remaining members of the Iron tribe - and thier dreadful two headed Spikit? YOU decide in the all new Iron Tribe Attack set from Lego Bionicle. Each set sold separately. Even though this is only one 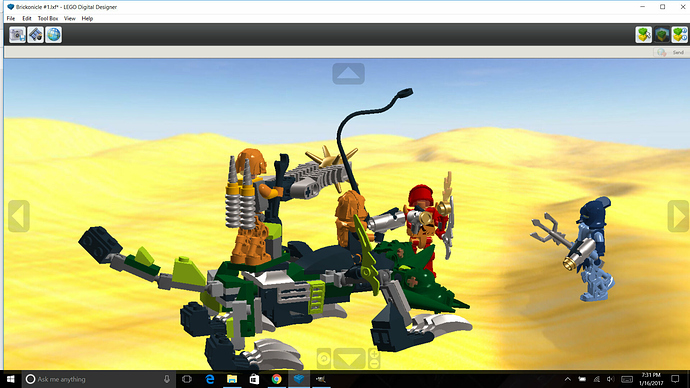 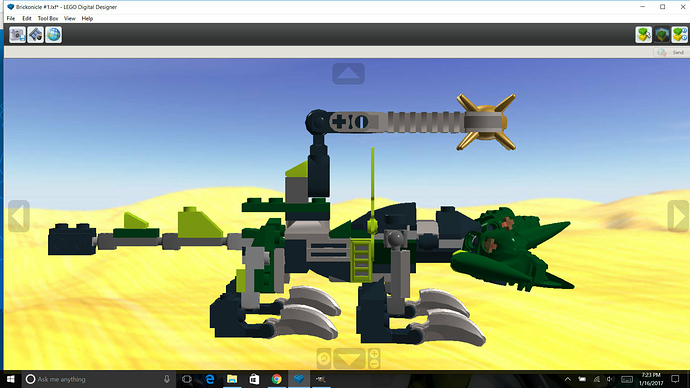 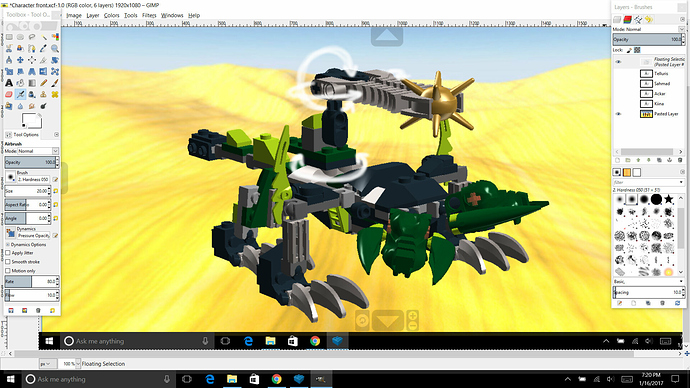 Articulation: The Spikit has a rotation turret on it’s back, which can seat one figure. The actual thronax launcher has added articulation.
It also contains a plethora of mixel joints (Three in each front leg, Two in each back leg, One in each head, and Three in the tale for a total of 15 Joints! Not to mention Three claws on each foot!) 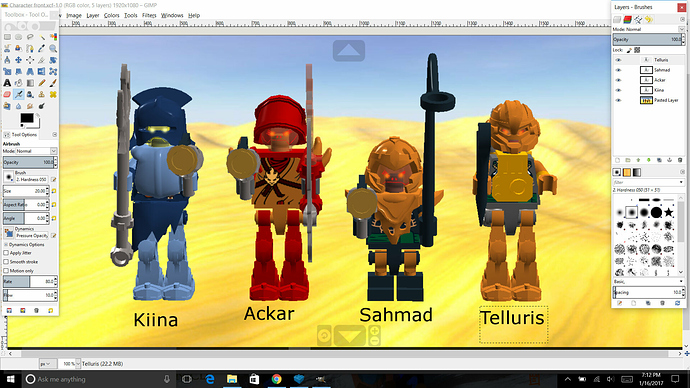 Figures: This set features Kiina, Ackar, and Telluris as glatorian; and Sahmad as an agori. Four in total.

Other Notes: I had quite the ride, so to speak, when building this MOC! I started it off as a battle pack as sorts with figures different, except one, than is shown. When the price got past $15.00, however, I figured I’d better do something else, so this came into being!
I’d definitely say that the most challenging part had to be the Spikit heads, which honestly would have worked a lot better if LDD had blocked a piece from entering a slot, where another brick would work!
The figures were fun to build, but the helmets were a bit tricky, especially Kiina’s! I did the best with what I had, though.
I took some creative liberties with the Spikit, ditching the gunmetal and chariot altogether, to allow for more compact play. (plus, I accidentally made the Spikit bigger than what it’s supposed to be anyways!)
The whole set is essentially supposed to replicate a scene from the Bionicle Comic: Valley of Fear.

Please forgive my terrible digital art skills on the face prints of the figures!

So yeah, that’s about it! (I’ll post more pictures if people want)
How do you all think I did? Do you like the set/MOC? Dislike it? Tell me your thoughts below, as I value comments and constructive criticism very highly!

Thank you in advance!

like the idea of using a lord of the rings helmet piece!

The first aspect of the MOC that really strikes me is the feet on the Spikit; they look pretty great, and they’re constructed in a creative way, but I wonder how stable they’d be in real life. Not sure that they would pass the tests in an actual set.

The minifigs are made out clearly enough that you can see a lot of emotion in each face; that’s definitely a plus. In general, the faces all look pretty angry, even Ackar’s; on a minifig, there’s a fine line between angry and evil.

The screenshot are just -no
I can see the Spikit having better possibility than the original, but this doesn’t look like a $20 set despite it 194 piece count.

I can see people buying it just for the figures.

@yolo360nosescope I figured it was the closest thing that matched!
@Azani You’re right in that I wanted to do something unique for the feet, and that it would have to be tested!
In all honesty, I pretty much just scribbled lines for the faces of the figures!
They would probably look more like this: 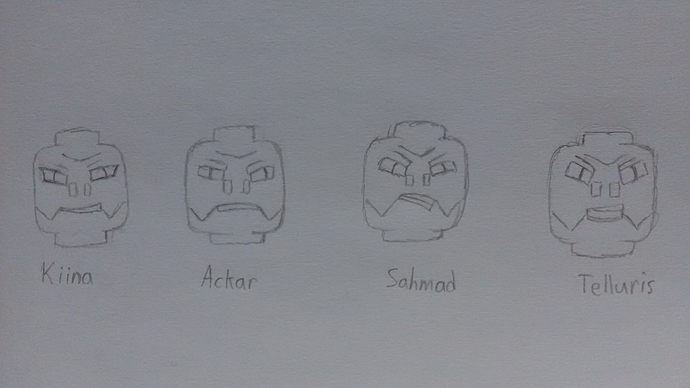 @LaserKnight Well, I can’t really do anything about the arms with the effect I was going for; the only possible solution would be to use the Woody Arms from the Toy Story sets. However, those aren’t in LDD, and I doubt that Lego would allow for the double plastic colors for an arm that size!
@VelociJACKtor Thanks! I tried to make the Spikit look more lizard-like as it’s legs were bent at a 90 degree with the sets. The front legs have more articulation, so one could pose it in a cat-like siting up pose, if one wanted to. For the tail, I just took creative freedom here. I was kinda aiming it took look like a Anklosaurus boulder tail.

@Leoxandar Thank you! Any other feedback?

Thanks for all the feedback, everyone! I really appreciate it!

I feel like the concept was good, however the outcome was not the best. I think that the characters look good except for the arms being really small compared to the legs on the glatoran. The spikit looks good and I like the two heads on it. I just don’t think the set is worth the $20 price tag.

This is pretty good! The only thing I can really think of changing would be making the Spikit a bit taller, and pointing the tail a bit more. Otherwise, nice job and good luck!