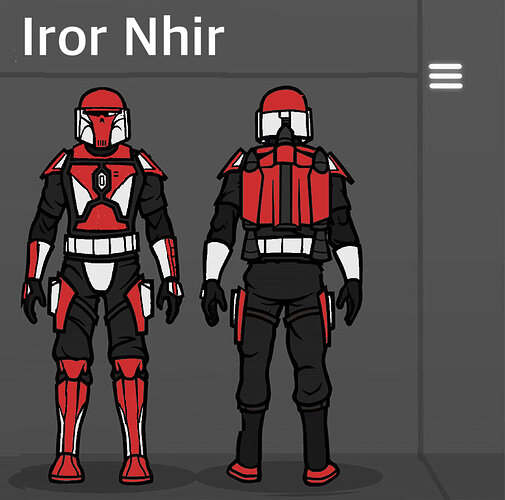 Template credit to Smack’s Art (@smacksart on Instagram)
Name: Iror Nihr
Occupation: Soldier
Affiliation: Clan Nihr, the Outcasts
Gear: Mandalorian gauntlets (including whistling birds), basic medkit, two throwable beskar knives with magnetic return systems, full beskar armor, and reconfigurable pistol (configurations: sniper, four burst fire, hand cannon, and default/semi auto)
Preferred combat role: Versatile, but primarily specializes in close range gunslinging and knife combat (think gunslinger from destiny)
Other skills: Infiltration, aerial assault/jetpack combat, some field medicine (very little, but can patch up some wounds and assist designated medics)
Bio: Clan Nhir has always been a group of juggernauts and heavy hitters, and members that used other methods were often mocked and occasionally excluded from many clan activities such as sports events and competitions. When Iror was young he tried to adhere to the traditional clan Nhir methods, but had a much smaller structure and found it harder to build muscle. During inter-clan gatherings and events he’d find himself interacting with members of other clans and learning combat techniques from them. After learning about how to use his smaller size to his advantage and training in that, he won a wrestling tournament within his clan. His prize was revoked for not following the clan’s tradition, but he was allowed to lead a team of other non traditional Nihrs called the Outcasts, and they’ve become a powerful tool for his clan.

So if I start role playing again/more often I might throw this guy into a Star Wars RP. I might write more characters I make with these templates but unless I write anything for them I either won’t post them or I’ll just put them in a thread for them.

Love the color scheme, ever consider making a wearable version and joining the Mercs?

Also, Hi! im a Merc from Michigan and love all things Mandalorian!

Nah, don’t really have the resources. It seems like fun but I’ll stick to my inflatable dinosaur

Really love the look of that “Saxon-esque” helmet though. There’s a guy on Facebook that makes them and I’m tempted to get it…

But I also want to buy a Boat load of Bohrok… so… priorities? lol

Haha, depends on which is more important to you