Is Tren Krom made of organic muscle?

Throughout the Bionicle story, it is common for fantastical sci-fi objects to be treated as normal, since, in the Bionicle universe, they are.

However, there are some cases of common real-world objects finding their way into the story, where they are treated as rare, or perplexing. When this happens, Greg Farshtey always did a good job of presenting them through the character’s eyes in a way that makes them seem foreign to the reader. I have compiled some of these examples below:

"Jaller’s eyes were drawn to [Umbra]’s feet, which featured rounded devices that looked something like gears. The Toa of Fire could not recall seeing anyone actually standing on their gears before, though. "

“The base of the cave wall was lined with white spheres. He moved closer for a better look. They weren’t rocks or some kind of natural deposit. Their surface was smooth, but seemed fragile, and he was amazed none had broken, stacked on top of each other as they were. Jaller reached out to touch one and his eyes widened. “There’s something alive in there!” he said. “I can feel it moving!””

"All six Toa gathered around to see what was there. After a moment’s stunned silence, Gali reached in and retrieved the unfamiliar object. It consisted of two short, round staffs made of wood, and rolled around them was a thin white sheet of a substance none of the Toa had seen before.

“Axonn said we would find a vital message,” Tahu said. “I expected a carving of some sort.”

Gali shifted the object in her hands, and it suddenly unrolled. Now all six Toa Nuva could see that there was Matoran writing on the sheet, just like the language found carved into stone tablets all over Metru Nui. But this was not carved, rather it was painted onto the sheet in some way.

“Well, that’s dumb,” said Pohatu. “Why use this when there are perfectly good rocks everywhere you look?”"

"He glanced around, looking for something that would inspire an idea. He found it in a pile of rotting vegetation atop an islet of mud off to the east. They reminded him of something he had seen once in the swamps of Le-Wahi on the island of Mata Nui. Turaga Matau had said something about some of the plants on the island not being like those in Metru Nui. They didn’t seem to be made of protodermis and didn’t break down the same way when they died. Tahu realized that in the end they resembled these dead plants in Karda Nui.

It makes sense , thought the Toa of Fire. Matau said some of the plants might have come from other islands. The plants here might have come in with the waters that flooded Karda Nui from outside. And he warned me not to use my powers around them when they started to rot, because…

So now, let’s look at the description of Tren Krom through this lens:

“He couldn’t get the image of Tren Krom out of his mind – a writhing, crimson mass of tentacles emerging from a gelatinous central core, with two dead yellow eyes that somehow followed every movement without ever moving themselves. At least, that was what he had seen at a glance – somehow, Brutaka knew to gaze for long at Tren Krom would be to invite madness.”

“Even when I [Mutran] look back now, I remember only a scarlet mass, a face that was not a face, tentacles lined with tiny, sharpened hooks, eyes that were little more than holes in a gelatinous skull, and that voice… oh, that voice made Makuta Teridax sound lilting and sweet.”

Upon first reading, this brings to mind a Jello-like creature. But, is it possible that this “red gelatin” is simply a “Bionicle description” of raw organic muscle?

Not only would fit with Greg’s previous descriptions of “normal” objects, but it would also bring a new aspect of “nightmarishness” to Tren Krom for the reader. Additionally, the “small white hooks” could be organic teeth, and the magical appearance of Tren Krom’s extra eye could be as simple as Tren Krom opening an eyelid; I don’t believe Matoran Universe physiology include eyelids, so characters would be unfamiliar with such an action.

But aren’t the toa partly made up of muscle? I think that they’d be familiar with muscle tissue.

Perhaps Trem Krom is supposed to be covered in skin? As far as I know, most of the living things on Aqua Magna have no skin.

Considering numerous references to a character closing their eyes, they seem to have some sort of eyelids.

It isn’t just shutting off their optical receptors, either, since tanma still saw the light from Matoro using the ignika with his eyes closed.

I think that they’re familiar with muscles

But they wouldn’t be familiar with the material. Additionally, Tren Krom seems to be more of a “blob” of muscle, while the muscles in a Toa would have more defined shapes.

Finally, the muscles might not be identical-except-for-material; they share the same purpose, but we don’t know if they use the same “technology”.

Shoot, yeah. You’re right. I guess Tren Krom did just generate an eye. Or perhaps he just brought it to the surface of his body, and he was keeping it stored within.

Either way, this was more of a side theory.

I guess Tren Krom did just generate an eye. Or perhaps he just brought it to the surface of his body, and he was keeping it stored within.

It could be somewhat like the eye of a snail.

the “small white hooks” could be organic teeth,

Why would he have teeth lining his tentacles? I think more along the lines of Giant Squid.

the “small white hooks” could be organic teeth,

Why would he have teeth lining his tentacles? I think more along the lines of Giant Squid.

I agree that the spikes on Tren Krom’s tentacles are more similar to the hooks on Giant squids and Colossal squids. I imagine that a lot of characters know about teeth, since a lot of rahi appear to have them. 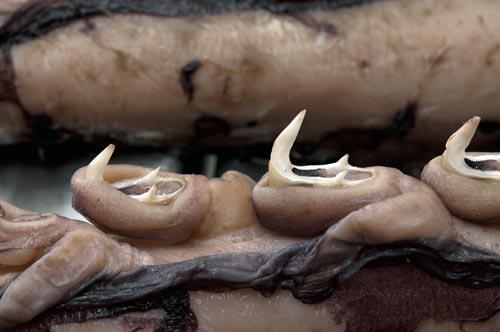 I always assumed he was made of muscle. I interpreted his description as basically a giant heart with tenticles.

When the Toa of Stone caught up to him, he found Kopaka standing over what looked like a piece of scarlet gelatin. Pohatu glanced around and saw that similar objects covered the ground for hundreds of yards. 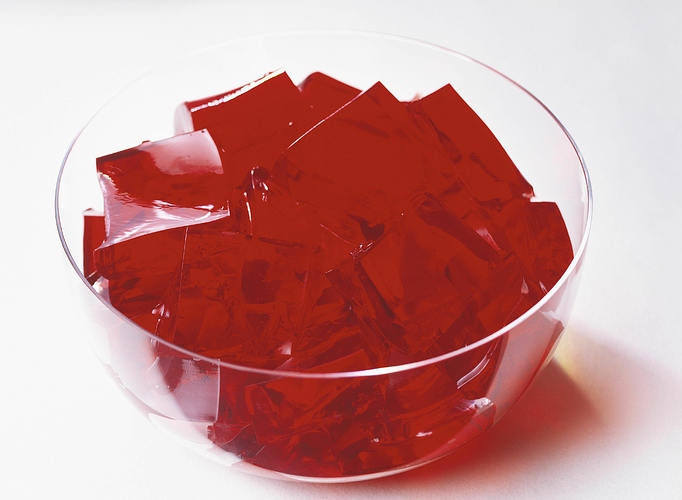 I interpreted his description as basically a giant heart with tenticles.

This is one of the best interpretations. Nothing mechanical, just a big heart but with veins and arteries as the tentacles.

I just did this drawing that sort of represents a flying version of what I was describing: 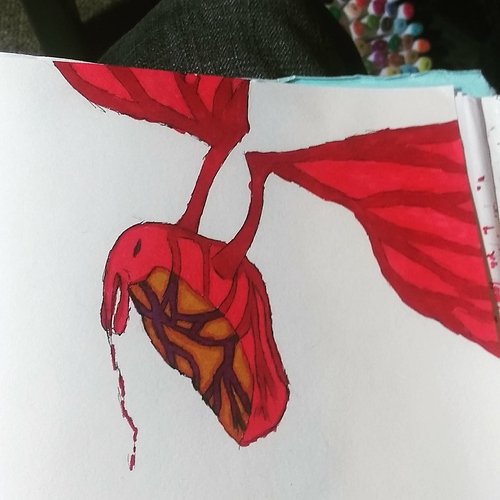 That pretty much wraps it up.

Perhaps Tren Krom is a different… alloy, I guess… of organic protodermis.

This raises the question of what exactly organic protodermis… is.

Yeah… this could’ve been explained better. Maybe protodermis is capable of behaving in a similar to carbon, acting as the basis of biomechanical life on a molecular level?

Or protodermis is a vast variety or substances made of an extensive but specific set atoms, leading to enough versatility to make a whole universe…

OR protodermis is an element or substance connected to the very essence of creativity (and thereby the concept of LEGO)… which… honestly might be my new head-canon?

My thought is that protodermis is a specific unique compound or element, but then nothing in the Matoran Universe is made of pure protodermis.

For example, Protodermic rock is a mixture of protodermis and minerals from Spherus Magna.

Liquid protodermis is a slurry of water and protodermis. (This also fits with the idea that the oceans and rivers inside Mata Nui were for transferring materials)

This also explains why Toa and other Matoran Universe beings are able to use their powers on non-protodermic beings or objects: their powers were designed by the Great Beings to work on the non-protodermic version (perhaps using technology developed by the Great Beings prior to the concept of the Great Spirit Robot), but then they homogenized the Matoran Universe with protodermis to strengthen the connection between a being and the object they are manipulating.

I imagine that a lot of characters know about teeth, since a lot of rahi appear to have them.

And even some of the books mention the toa having “Teeth” of sorts.

Organic Protodermis is protodermis being used as a connective tissue, such as muscle and ligaments. Protodermis can also be generated in solid forms, such as metallic protodermis (as seen on characters’ armor and weapons) and in liquid form (molten protodermis, energized protodermis). Tren Krom appears to use a variant of organic protodermis that is very close in appearance to actual organic muscle, as well as having a generally organic appearance.

My theory here is that Tren Krom, being on of the GB’s first creations, was made partly as a test for how close they could get to creating a fully organic being, resulting in his strange appearance and insane powers. He sounds, from his description, like a cross between a slime from D&D and a giant squid.