So I’ve been going through A LOT of old content, looking for things that the new story team could use to link Gen 2 to Gen 1. Now I admit, I almost overlooked this one, but I found it thanks to a TTV video. 99.9% credit to Mesonak for this one, because he found it but overlooked it. Granted he didn’t realise how important it was, so you can’t really blame him. 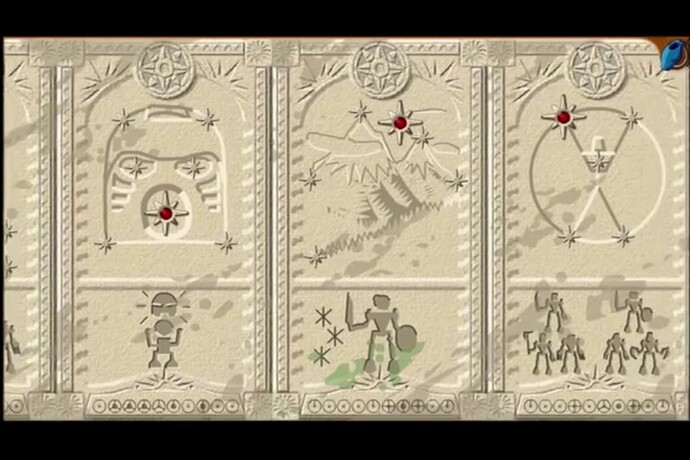 Recognise this? It’s a MNOG screenshot. Look in the bottom left corner, showing a Turaga “holding” a mask that looks like “half a Hau.” But if it was a Hau it would be more curved along the bottom, right? That shape is oddly familiar… Oh yes! That’s the outline of THE VAHI. It’s like someone drew a semicircle over the top of the Vahi, detached it and called it a mask.

Of all the places it could show up in, it had to be MNOG, the beloved point and click adventure. Now this doesn’t give us much info (probably none, it’s probably just a coincidence, but we’ll never know) other than a hint at what the second half of the Vahi looks like. Thoughts?

Its possible that this was just a random half-mask or mask similar to this;
http://cache.lego.com/media/bricks/5/2/4614409.jpg

It was planned from the start

so you’s telling us that Bio 2015 was also Greg’s idea? Preposterous!

rethinks everything he knows

The Vahi or ‘Mask Of Time’ plot seems to be one of these plots.

When i was a kid i loved to watch these carvings. And this one, I’ve never understood. I was thinking?: “What mask could it be? It doesn’t look like any other we’ve seen before!” Now it kinda makes sense.

I always imagined that was just artistic licensing for a Hau, like half of it is in the Turaga’s hands.

The eyes are in the wrong spot tho, unless the masks together are for someone with 4 eyes.

I don’t know If that is the second half of the Vahi, but if it is, the fact that it was on this telescope in MNOG doesn’t surprise me.

And if it is, then, holy Gadunka.

If it was, then thats amazing!

It…it’s even being by Vakama, who created it in the first place.

Slowly but surely it’s catching on…

It…it’s even being by Vakama, who created it in the first place.

Actually, there’s no distinguishing features to indicate that it is Vakama. It’s simply a turaga.

I’m going to take the “Major Buzzkill, this is all a stupid coincidence” route here. I don’t see it being the Vahi, in fact, it’s most likely just artistic licensing. It looks like a mask, but not any specific mask, simply because it represents the Golden Masks the Toa have to find as part of the prophecy. That is it.

You can tell it’s Vakama even by just looking at his mask’s shape. There’s that subtle tip characteristic of a noble Huna. I don’t know any other Turaga with a Huna, do you?

Besides, who else would it be? They’re the only Turaga with that body shape.

You can tell it’s Vakama even by just looking at his mask’s shape.

I’m gonna quote myself; even though it was about something different, the wording still applies.

It looks like a mask, but not any specific mask,

Possible but unlikely. As others have said, I suspect that your “half Hau” is in truth a generic representation of a Kanohi.

Uh, what if it’s the six Makoki stones? Anyone thought of that?

I’m talking about the Huna, not the supposed Vahi.

I’m gonna quote myself; even though it was about something different, the wording still applies.

Must I continue doing this?

I wasn’t talking about the mask the turaga was holding, but rather the mask the turaga was wearing in that post. I simply quoted myself because I am lazy and have already said the same thing before, albeit about a different subject which I thought I had clarified succinctly. Now I have written this drawn-out post to tell you that I had already said all this. Darn redundancies.

The kanohi the turaga is wearing looks like a mask, but not any specific mask.