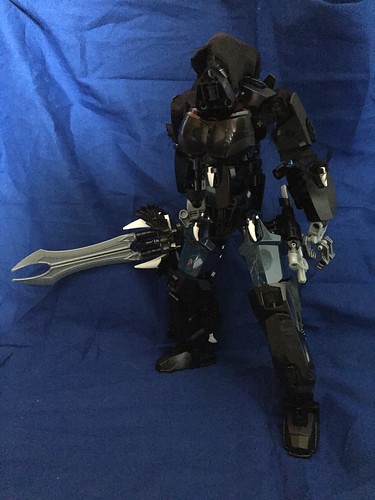 A stranger who claims to
have no memory of his past. Although some have tried, no one has been
able to refute this claim - and none have been able to trace him from
prior to his arrival on the beaches of Erkelon, far south of Okoto, in a
strange "canister". What little knowledge he does have of his nature
comes from his recent experience - although he has been awake for but
fifteen months - and a few strange "premonitions". He is not even sure
of his own name - "Jetera", he says, is only a reconstruction. 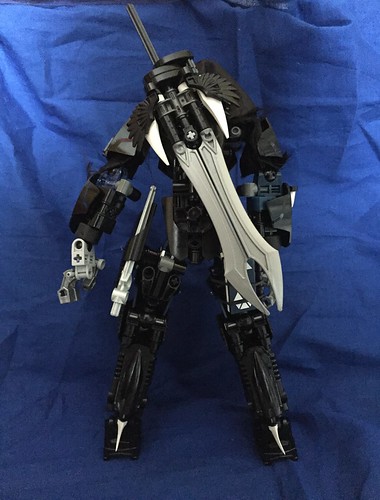 Shortly after his arrival, Jetera was chosen to be the Master of Storms of the Toa Vihagu. However, Jetera's control over his electrical element was
inconsistent and best, and nonexistent at worst - so he used deception
and surprise as his chief tools. Despite his initally aloof and
sometimes outright hostile demeanor towards his teammates, his affinity for them has grown greatly, and the friendships he has with them have become his driving force - as he had no fixed morality or sense of purpose upon arrival. 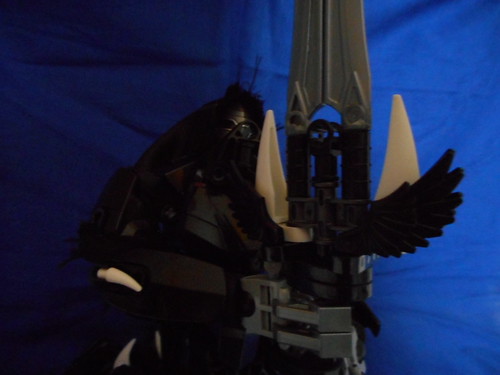 Jetera currently wields a lightning-infused steel sword known as Faera, which was bequeathed to him after a battle on the island of Talis. Its natural power greatly increases Jetera's elemental potency, although, for reasons unknown, he often opts for a non-elemental weapon. 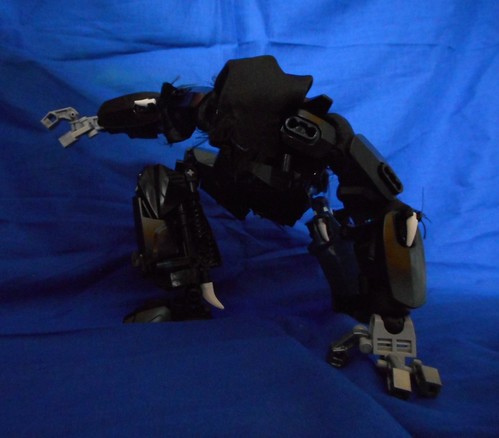 As said before, the first version of the character I've made in a while that I'm happy with. He also has a bit of new information added to his character - especially in regards to his motivations.

Similar updates to MOCs I've posted in the past are on their way. As always, feedback/constructive criticism is appreciated.

With a solid build and amazing weapon, Jetra is pretty great! My only criticism is that it doesn't have enough white!

How are people coming up with these awesome hoods?! /s

Great job on this MOC. Did you intentionally make it look like Kylo Ren?

Some more white would be nice, though apart from that he looks really solid. Also, nice job on the design of the weapon!

The hood fits in well with the build.

He looks great! I think more blue and some buffer shoulders and he would be prefect.

this MOC is great, I love the white tooth pieces scattered around the build and the little splash of color the navy on the legs add

can we get a picture without the hood?

How are people coming up with these awesome hoods?!

How are people coming up with these awesome hoods?! /s

Thank my sister. She made a black cape for me a while back I never used until I realized I could cut it up to use on MOCs.

Did you intentionally make it look like Kylo Ren?

can we get a picture without the hood?

Well right now the head isn't that great, so he mostly goes without the hood. I am intending to give him a head that looks good hoodless in future.

Some more white would be nice

I do say it may be better to keep white as an accent color and not a tertiary color though. Other than that, I agree, and it just needs to have more on the torso and arms.

Just outa curiosity, what color are those thigh plates? In the first picture, they look sorta blue, but I dunno if that's just lighting.

Just outa curiosity, what color are those thigh plates?

They are indeed dark blue.

Interestingly groovy MOC you have here my friend. More white would be nice, but I think it's fine the way it is. But that's just a opinion, my opinion.