This is a review of what is now admittedly an older Avengers set. The title says little of this set; Iron Man vs. Ultron? You really won’t know much about this small boxed $13 set from the title. 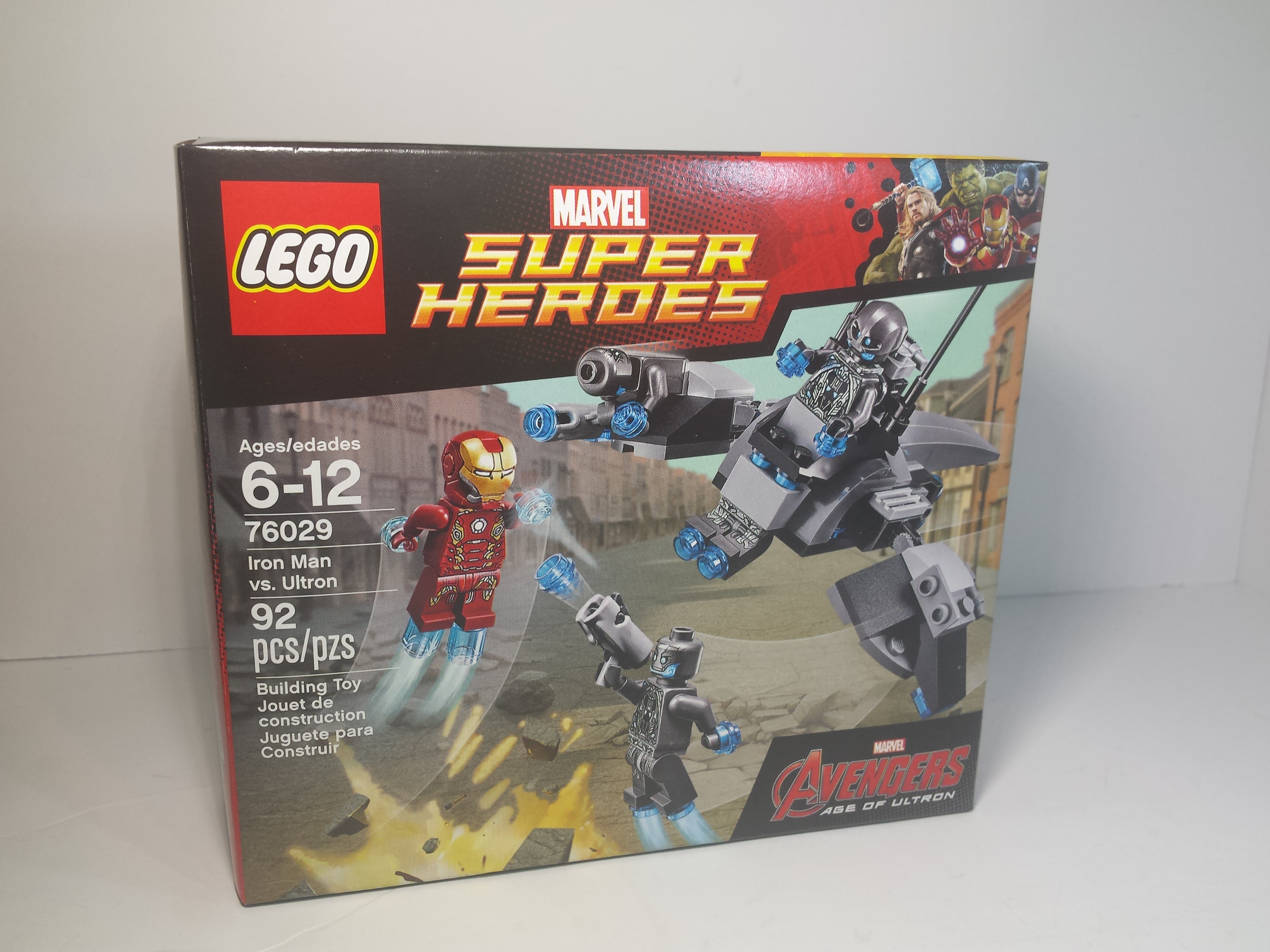 This set is an…interesting one. Nothing like this has appeared in the Marvel universe to my knowledge.

I’m going to do my best to interpret this: it is a hovercraft with pieces of Ultron drones attached to it. Yes, it is strange.

Let’s get into the set itself. 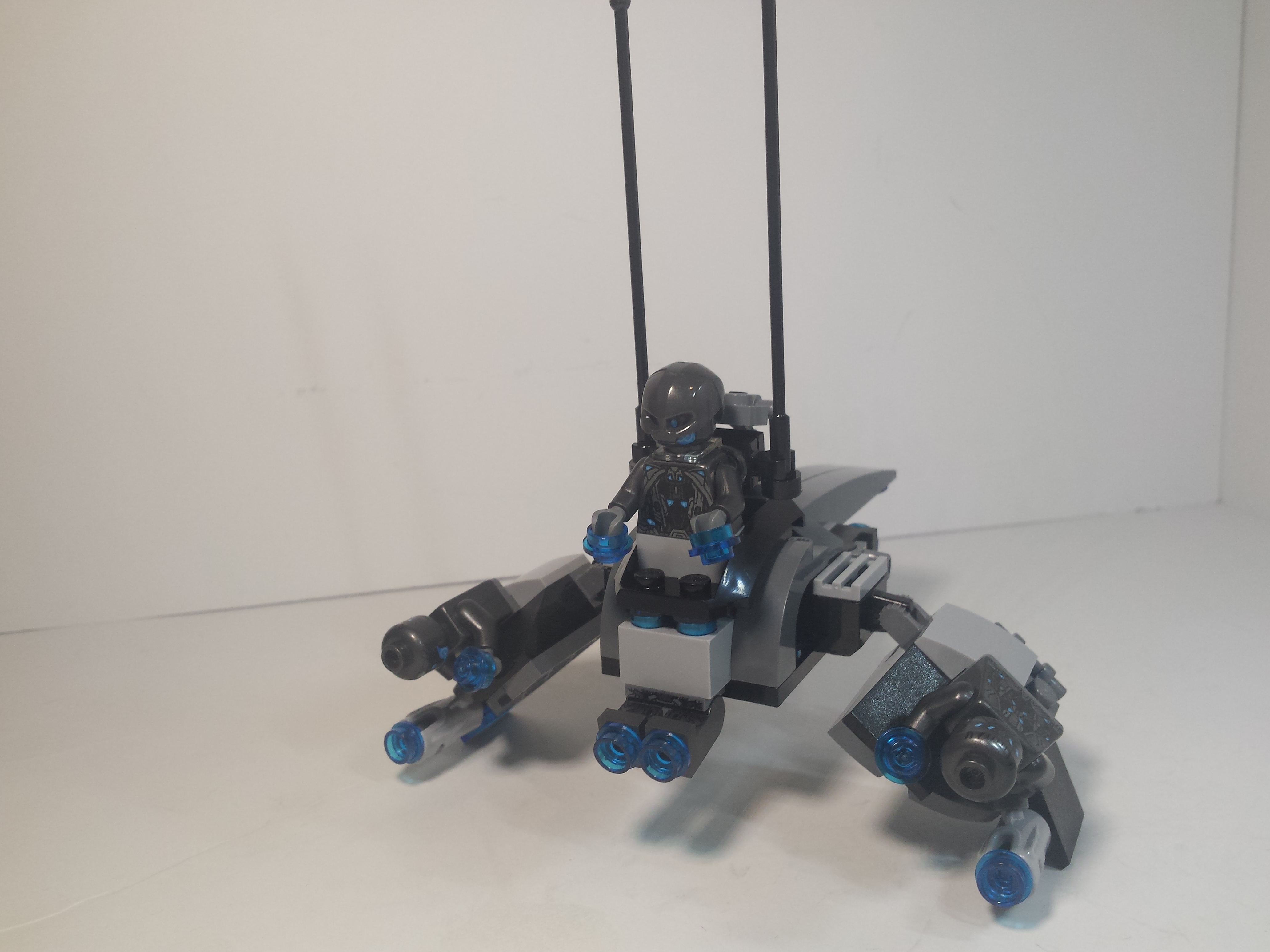 After an assembly of maybe 10-15 minutes, you will have a small, strange grey, black, and light blue vehicle whose purpose is up to interpretation. It has a few small cannons.

This thing is strange. Not bad, but strange. It has two stud launchers, one on either “wing.” Each wing is on a small ratcheted joint that gives it enough support to hold itself up, but it is prone to falling under weight. The color scheme is bland but coherent.

To be fair, the design is alien. It doesn’t look human, which is fitting for the theme.

Since I really am unsure of where to go with this, let’s get into the minifigures.

For a small set, the minifig count is generous, at four total.

The most elaborate of which is Iron Man in his Mark 45 armor. 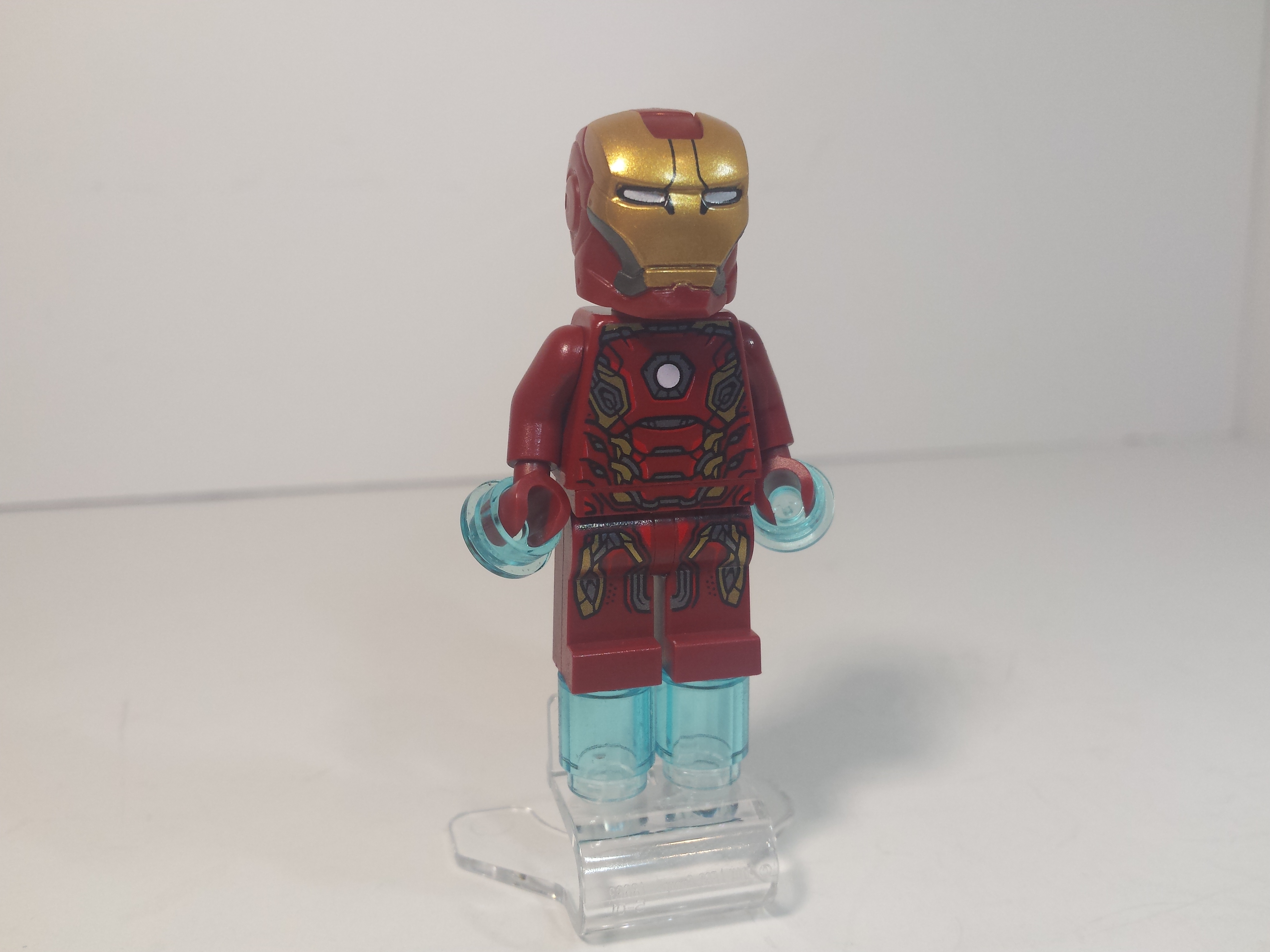 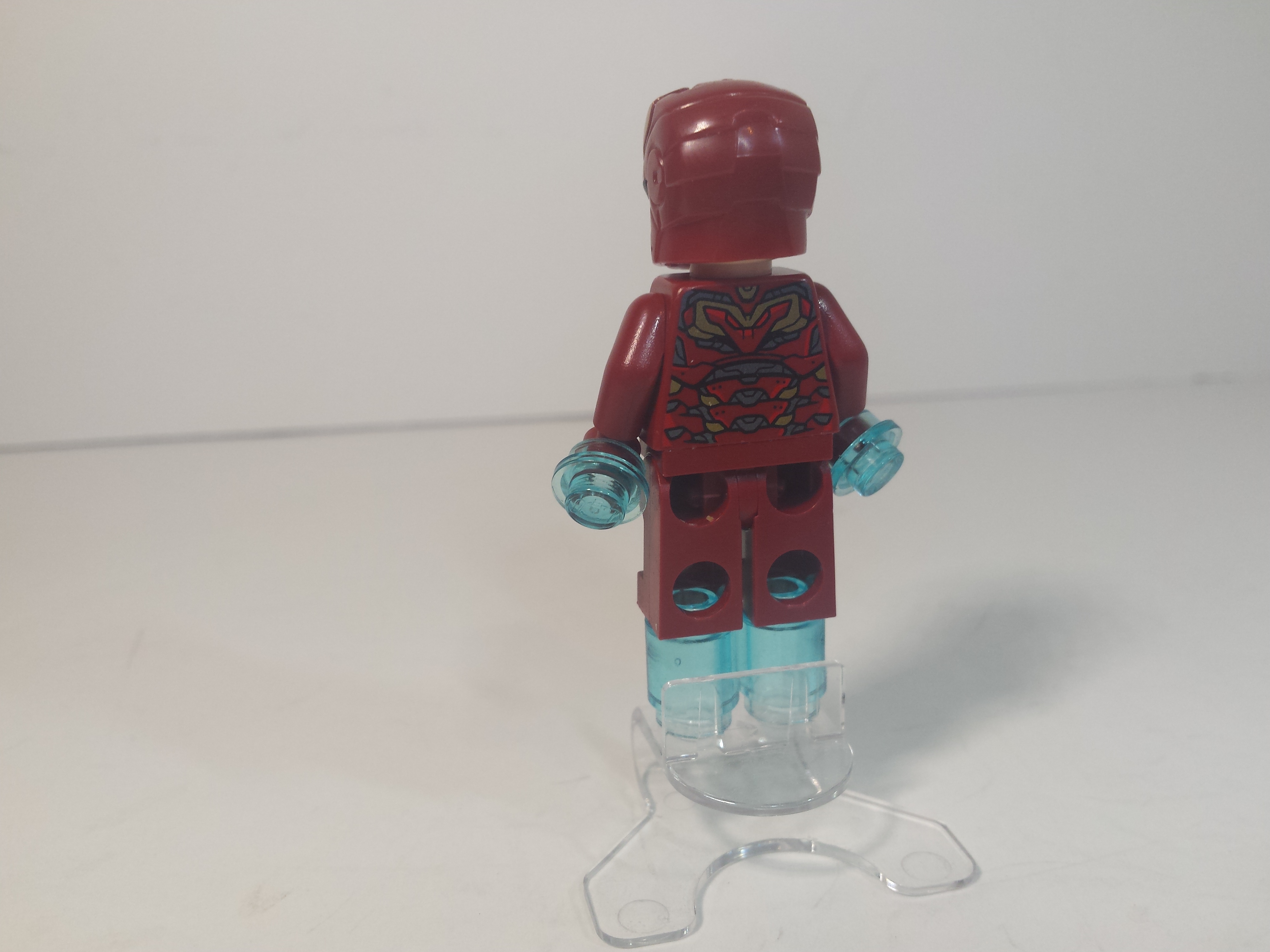 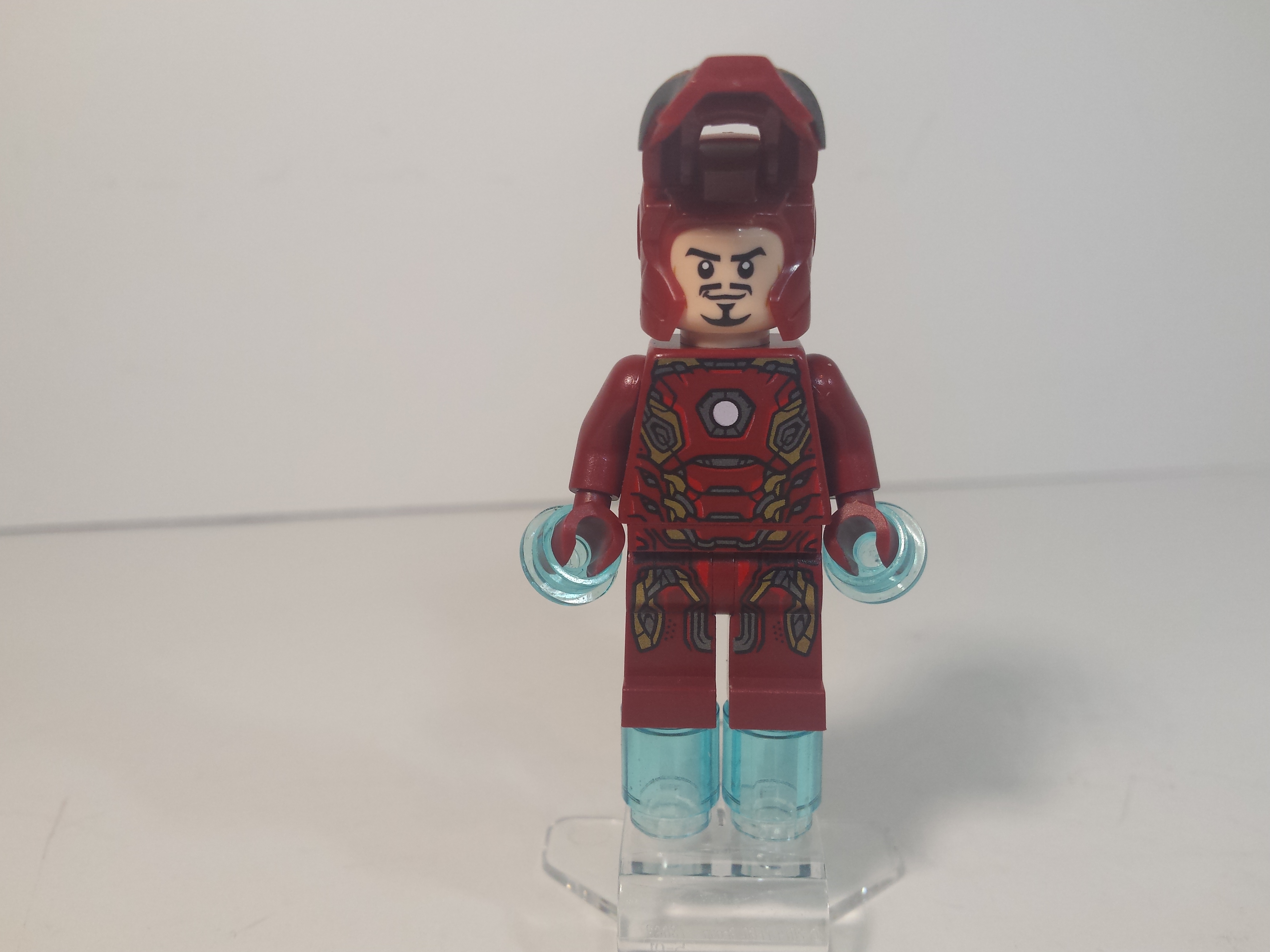 The printing is quite nice, as is usual. I appreciate the two shades of red featured on the armor.

In addition, there are also a few pieces included to replicate the repulsor effects.

Here’s the secret to this set; it contains the parts of three other minifigures stored in various places on the vehicle. These components form three Ultron Sentries, including one Officer. The printing is identical all across the board. 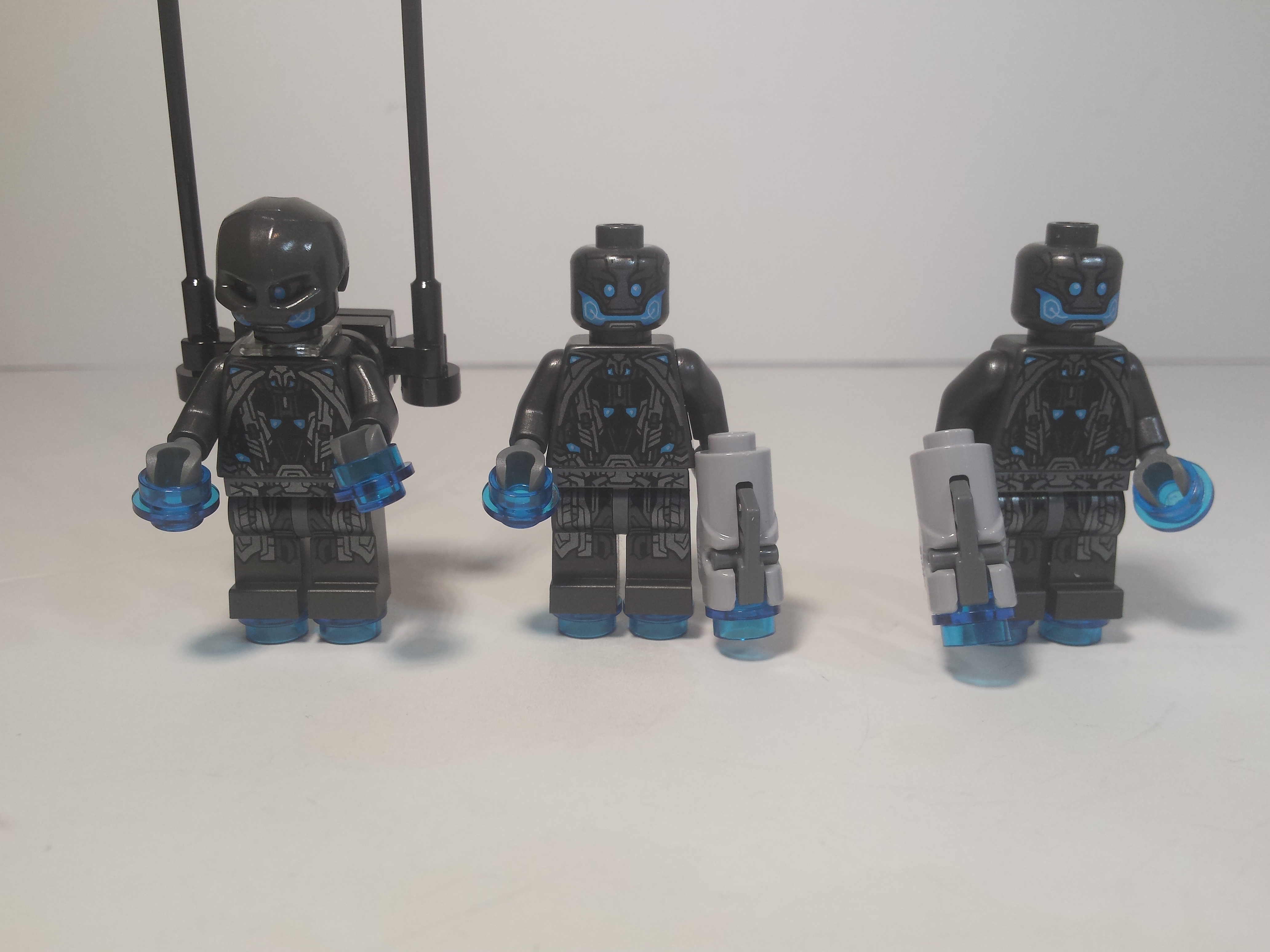 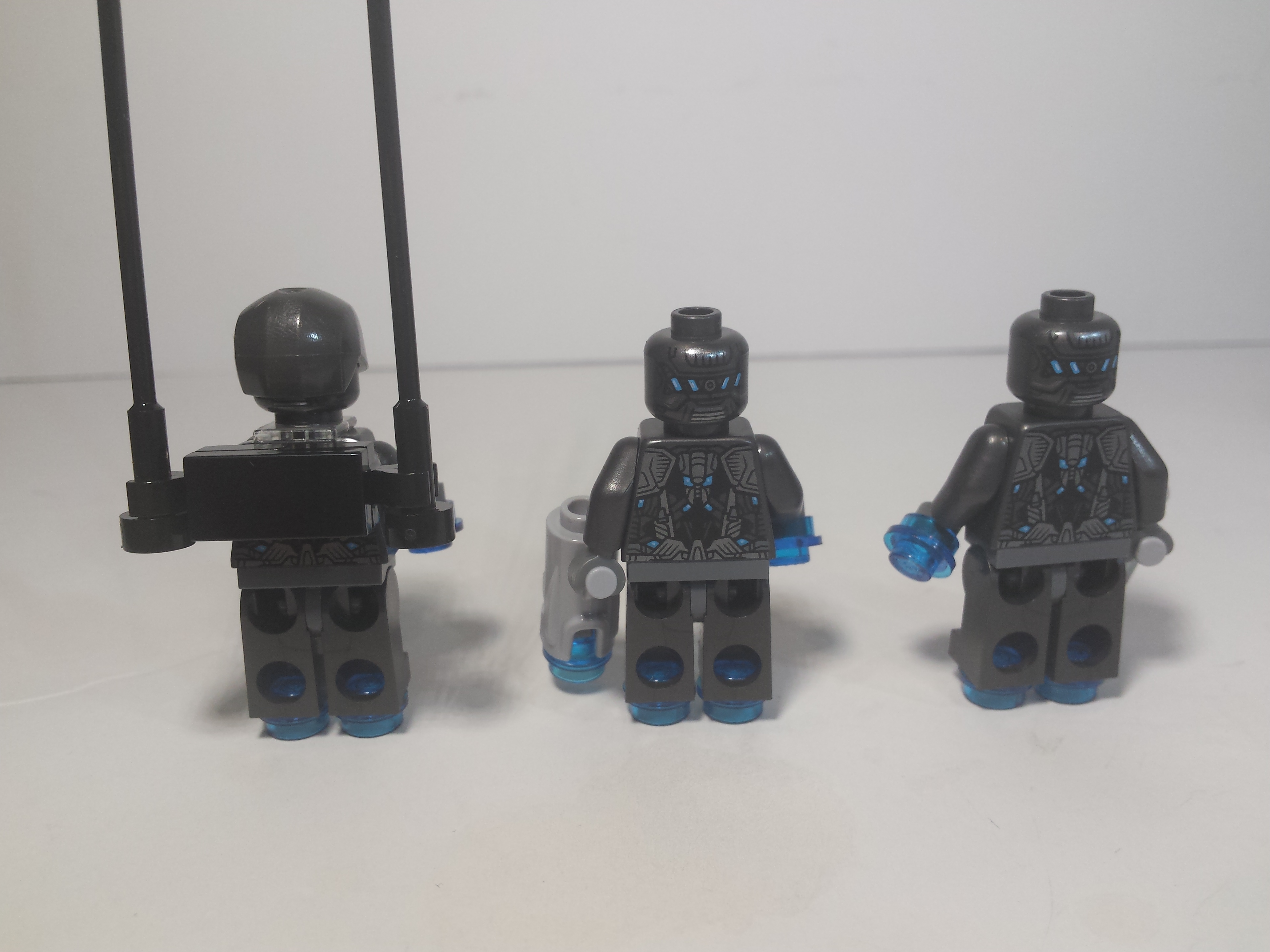 The two standard Sentries wield stud launchers and there are extra blue studs present on all three. They are all decent minifigures, though the printed faces are admittedly off-putting. There is something lost in the in menacing appearance.

Now for the last part of this set. 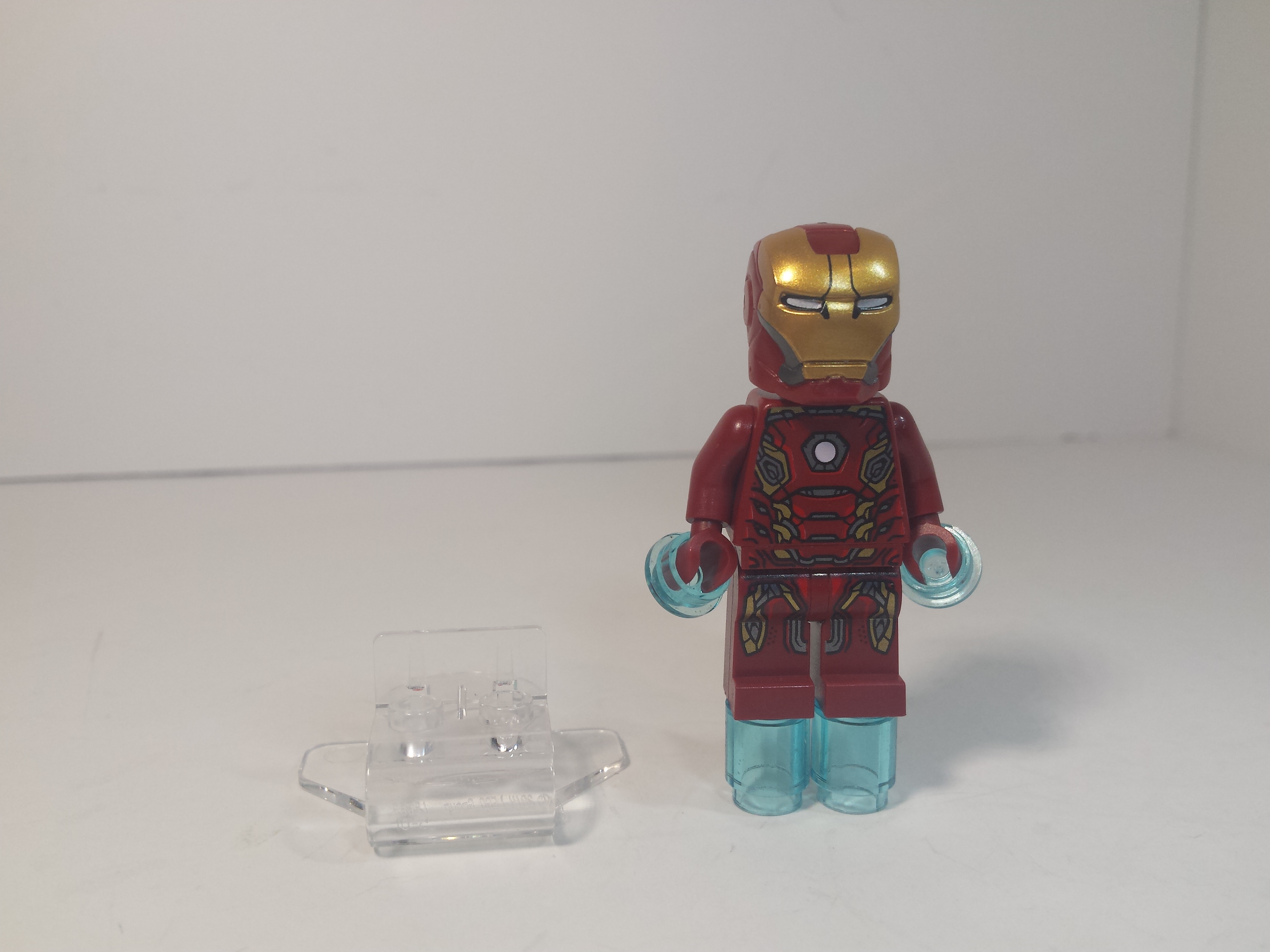 There’s a Super Jumper. This was my first experience with the infamous Super Jumper, and I can’t say it was a great one.

To use this feature, you must first remove a lock on the vehicle. 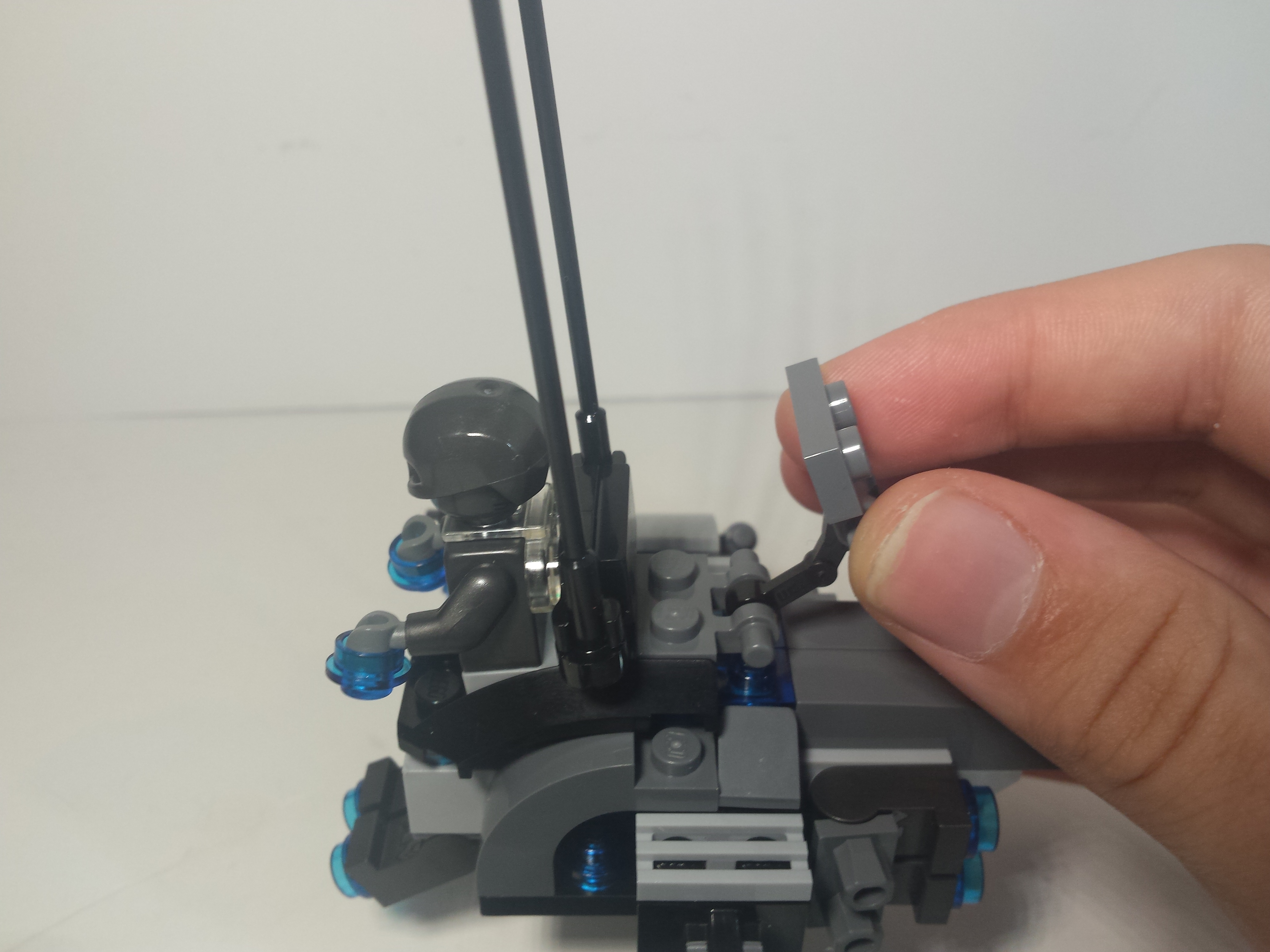 This will function due to the lack of a secure stud connection of the target. 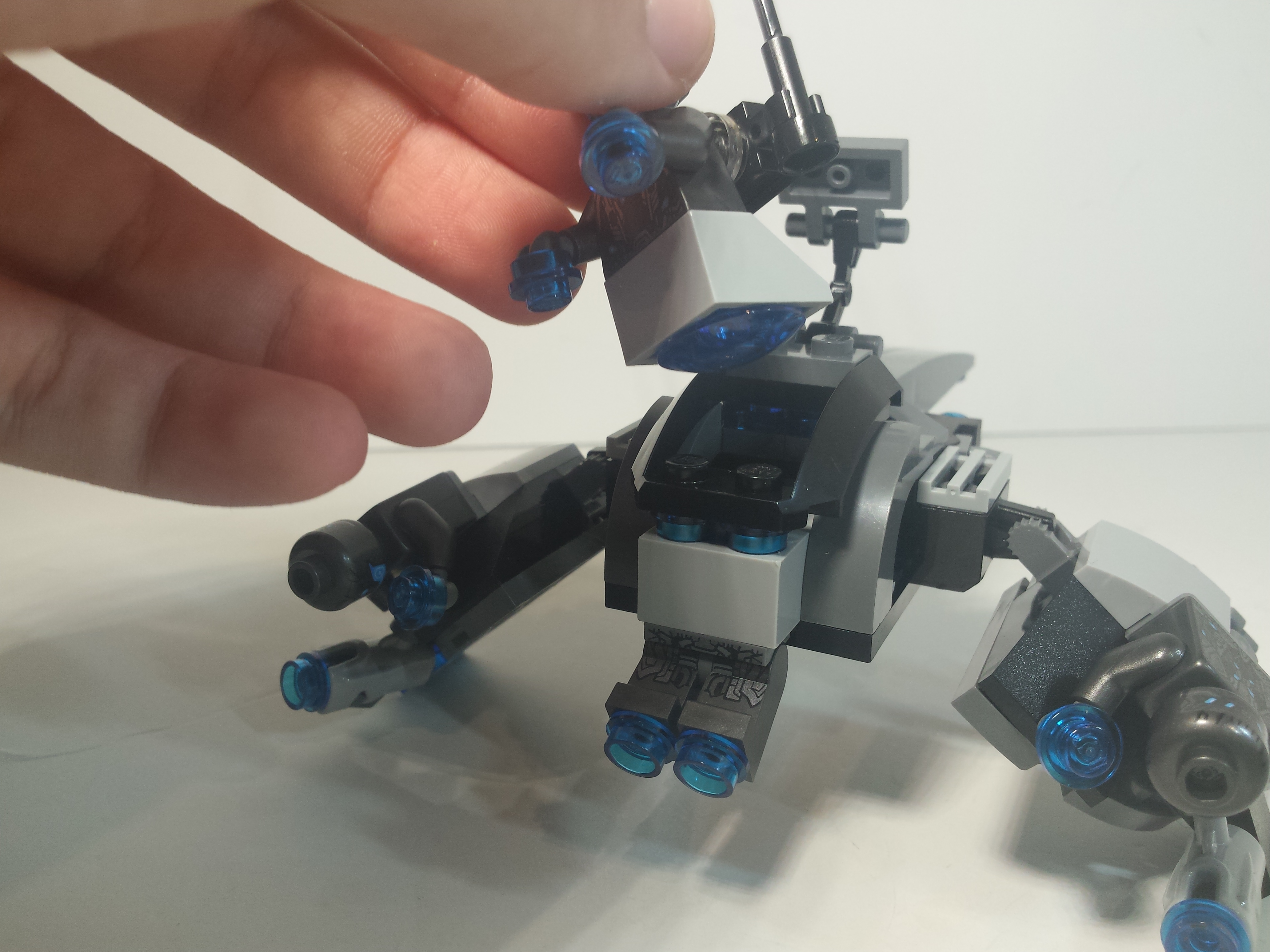 First, place Iron Man on the stand using the cylinders (it can damage the figure if you use the legs themselves). Then simply aim it at the vehicle. 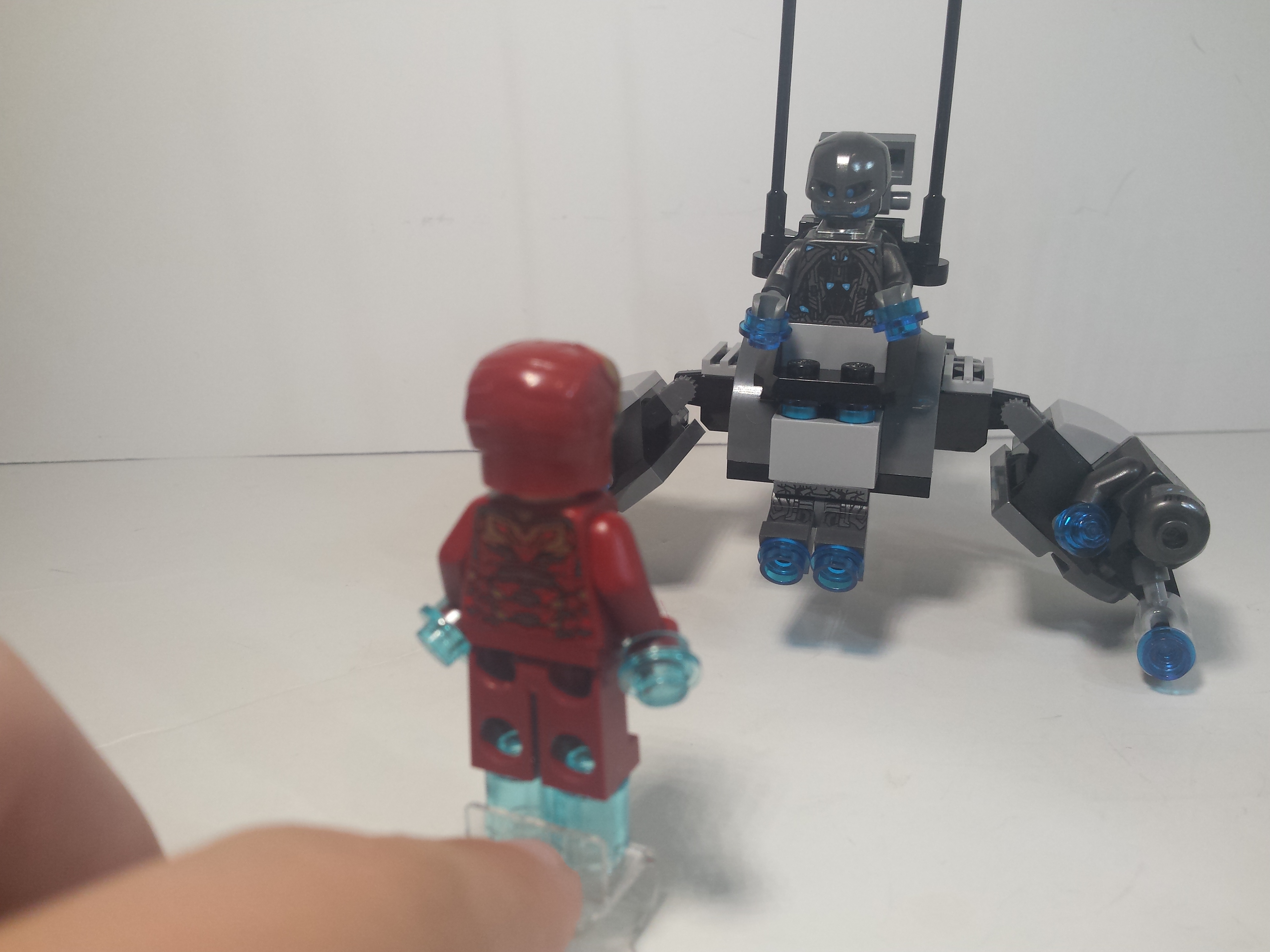 Here’s a quick video demonstrating my success in hitting the Ultron Sentry:

It’s not perfect, and the figure is prone to falling of the Jumper, but I suppose it works. The clear plastic is frightening, however, to those who know that some transparent plastics can break easily under pressure. Fortunately, this incident has not occurred for me yet.

That was a thing.

In all seriousness, this set is not a bad one. It is strange due to that it never appeared in the movie, and the idea that it is covered in dismembered Ultrons is downright creepy. But is it really a bad set? No. It includes an iconic character and three army-buildable drones. None of the figures suffer any quality issues, and the Super Jumper is just okay. It isn’t horrible, but I do find myself occasionally messing around with it on my desk.

What’s the final verdict? This is an okay set. I’d rate it a 7 out of 10 for a set of it’s price range. It’s an army builder set with a small, forgettable vehicle thrown in, something we are very used to.

That’s it for this review, and I hope you all enjoyed it!

Oh hey I had this set. Nice to see your thoughts on this.

I got this because I had extra money and really wanted that Iron Man.
I agree with your review.