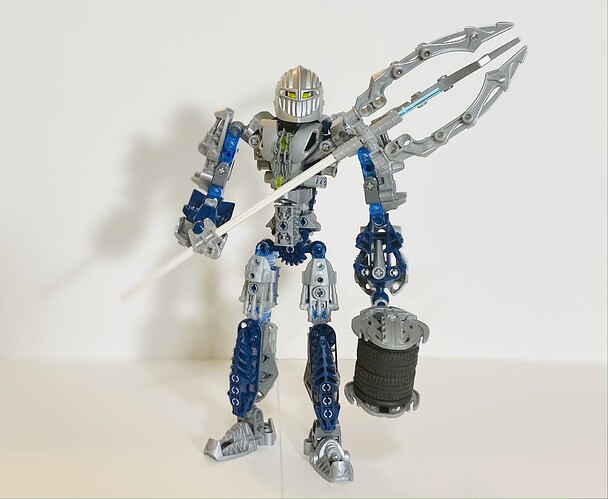 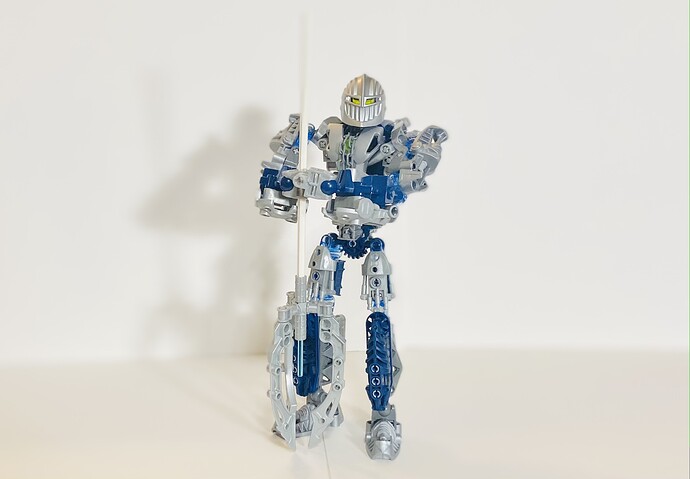 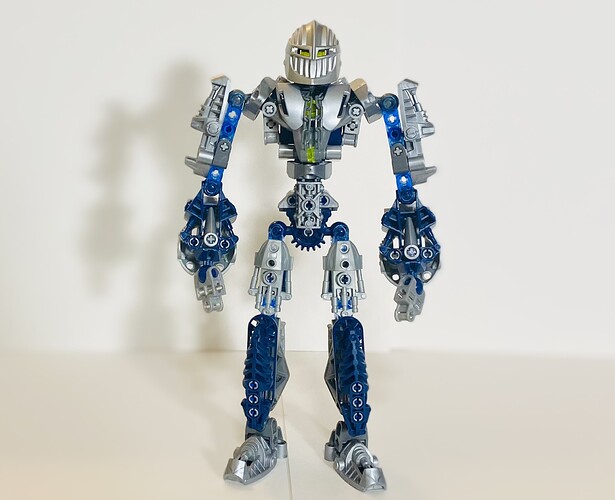 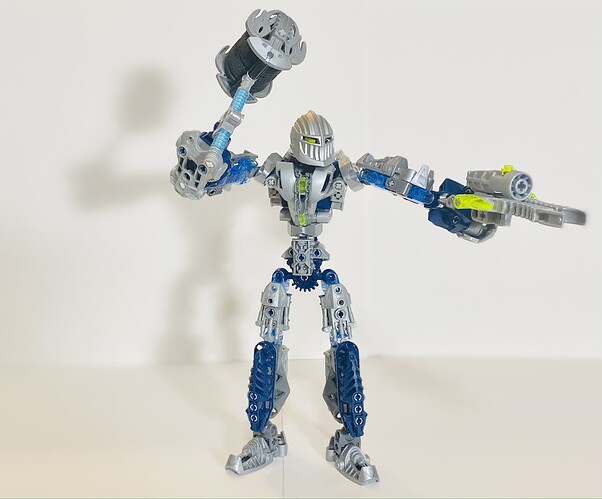 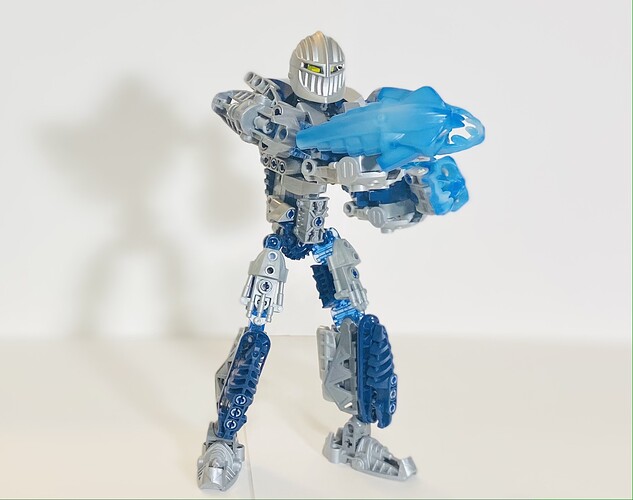 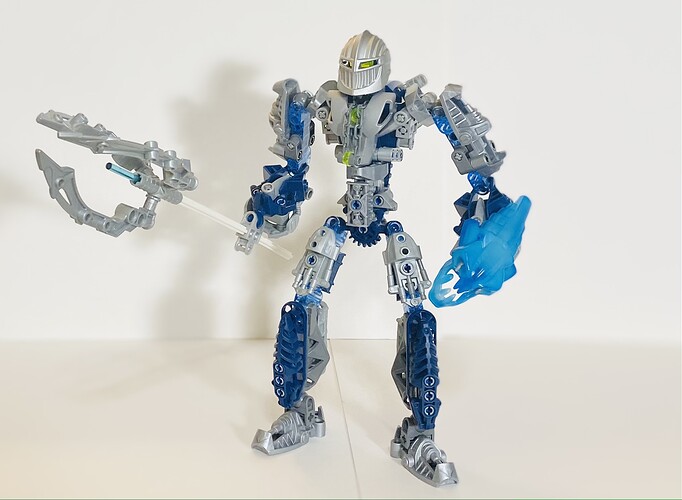 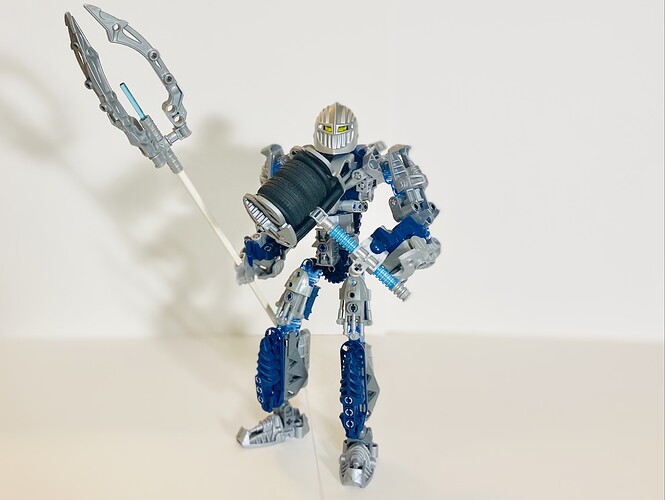 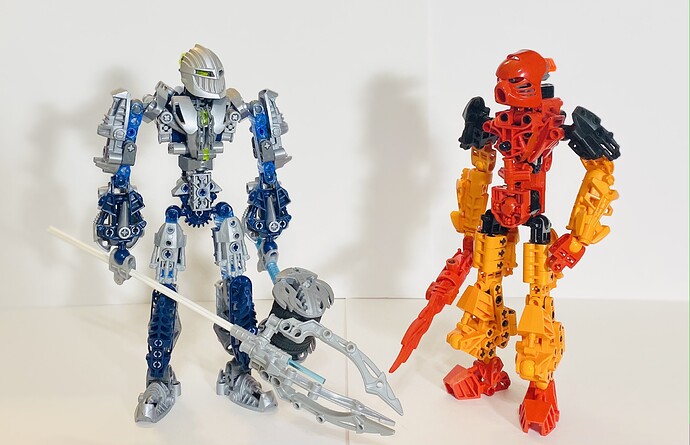 Character Biography:
Jodem is a Diiroa of Water and Light from the planet of Yokkah Magna.

He now serves as the leader of the Elements, a team of spirited and courageous Diiroa warriors who have grown together as teammates and friends through their connection to Jodem.

Creator’s Commentary:
Jodem, future OC MOCs, and their stories do exist and take place in the G1 BIONICLE storyline / universe. At this time I’m not going to disclose the connection to G1, but just take note that my lore does take place in G1.

Jodem’s grandfather and grandmother were the first Light Diiroa, and thus all light Diiroa are related to Jodem and can trace back their common lineage.

Jodem has been my self moc for well over a decade.

I believe he was built and conceived in early 2009.

When it was announced that the Glatorian are separate species with no gender restrictions for the indivisible elemental tribes, it inspired me to make a male character powered by the element of water.

Glatorian helmets also had me recall the Knights Kingdom Rascus figure I was gifted as a young child, and I sharpied the mask silver to give my self-MOC an original and unique characteristic to the BIONICLE universe.

Jodem was initially conceived in 2009 as a Great Being. This idea was deemed boring and scrapped in recent years with the revamp of my self-MOC in 2018, and the revelation that Great Beings were simply hyper-intelligent, creative, and imaginative members of the Glatorian species.

When Jodem was first built in 2009, his torso consisted of a Piraka Torso with Hordika Chest armor. I implemented the Nuva Chest in 2018 after creating a custom torso for Jodem and bulking up the arms and legs.

The use of Takadox heads as water gauntlets is really neat and it works super well. Great job all around.

Thanks! I forgot to mention this in the commentary, but the whole idea of having the heads act as gauntlets is inspired from the Nemean Cestus Gauntlet Weapons from God of War III.

@GoodGuy2006 When I first created Jodem, he definitely took inspiration from much of creators of early BioTube.

Jodem’s custom torso is inspired by those of DawnofNSSD. I didn’t start making custom torsos until I really familiarized myself with DawnofNSSD’s style and tutorials. He really helped push the trend of custom torsos, along with MoonWerewolfAir, and then KylerNuva135, Shadowgear6335, and ToaJunie (Alieraah) who pushed MOCing potential even further.

heh, i’m likely only here because of shadowgear