I have been having several ideas for the storyline of G3 recently, and since the G3 discussion began. I will begin by sharing my idea for…

In G3, it’s been decided by TTV that the main villains will be the Brotherhood of Makuta, and the mutated Rahkshi (BTW, I love the G3 Rahkshi, which can be seen in my previous contributions.). But what if Makuta himself isn’t even the vllain?
I’ve touched on this in a previous discussion about the Matoran Religion, (Credit where credit is due; it was @Squidzo’s Matoran Pantheon topic that kickstarted this idea) that there are Three Brothers of Mata Nui, and this came directly from @Squidzo: Ekimu, the god of Unity, Makuta, the god of Duty, and Mata Nui, the god of Destiny.
Makuta has been christened the god of Duty, because of his creation of the dutiful Rahi creatures. As the three gods are fairly active, Makuta has been known to express that he would like a world with no Matoran, so his Rahi would be free to live on the land without the Matoran hunting and killing them, but Makuta is by no means evil. The Brotherhood worship Makuta and everything he has done, and see every Rahi beast as what they should be. That is where the Rahkshi come from; they wanted to be more like Makuta’s creations, and have thus transformed themselves. Now, they feel like they should do more for their benevolent leader by completely wiping out the rest of the Matoran people with the Mask of Time. This is the purpose that the Toa have; to protect the Matoran who would otherwise become extinct because of the Brotherhood. And that is where the story for Year 1 comes from.
Then, by the end of Year 3, the Brotherhood of Makuta has become so bloated and powerful that even Makuta by himself cannot stop them, and they have realized that because Makuta wasn’t strong or willing enough to destroy the inferior beings that they themselves think they should be rulers. So, in the ultimate finale, the Three Brothers, in physical form (Like Shiny Ekimu from G2), join the Seven Toa in a final battle to destroy the Brotherhood once and for all. And that is what I think should happen for G3 Makooti.

RAHKSHI in G3
I have a visual for the original six: 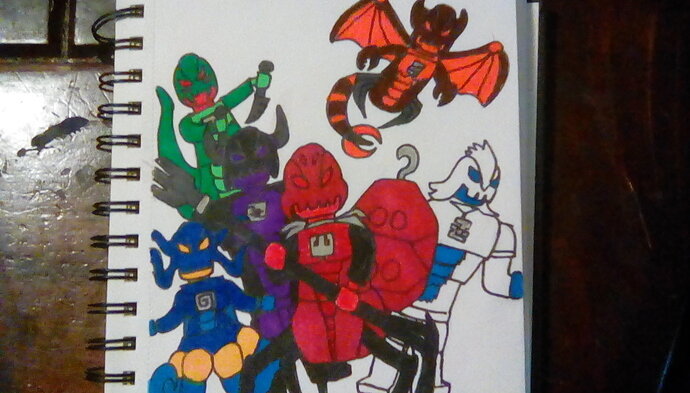 The Rahkshi in G3 aren’t inherently evil either. The Brotherhood have tried their hand at creating their own Rahi creatures, to honor Makuta; The Kraata. In theory, the Kraata would be able to transform a Matoran into a specific Rahi. The Brotherhood didn’t want to try it on themselves, so they send the six original Kraata into the different Koros, where the Kraata would choose a host.
The Matoran that would become the Rahkshi are not evil at all (Well, maybe the Lerahk and Kuurahk hosts), but have certain specific personality traits that would make them ideal hosts for the different Kraata; a Fearful mind, never-ending Hunger, a Poisonous personality, clumsiness able to almost Disintegrate anything, Shattered confidence, and a barely contained anger. From then on the Kraata takes control, and the Matoran are transformed.
Because of this success, the Brotherhood attempts more conversions, and by Year 3, the entire Brotherhood is a Rahi-hybrid, and more unwilling subjects are being turned.
Before the end of Year 3, the Toa find the antidote the Kraata’s reversal (Don’t know what yet) and reverse the original six Rahkshi, so while the Toa and the Three Brothers are fighting the collective Brotherhood, the newly cured Matoran would go around and cure the others.
And that is my idea for the Rahkshi.

thats a really god idea for the story, though would the toa also be fighting the brother hood? Since the whole “kill the matoran” gives more purpose for the toa to be a thing and protect them.

Some interesting ideas! I like the unique take on Makuta, though it admittedly isn’t my favorite take thus far.

I actually came up with something identical in my brainstorming doc. It’s really cool how many fans are coming up with the same ideas and applying them to their pitches.

So, the inevitable conclusion of Peta?

I’m OK with this.

I had an idea that maybe the three gods existence is unknown and the Brotherhood of Makuta is just interpreting what they think is his will. This would be the same as the Toa.