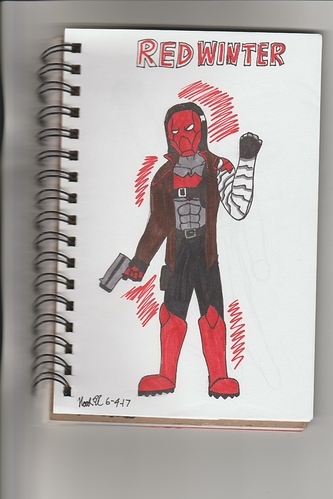 A new drawing, possibly a part of another series (y’know, if I want too.). Some of you may know that in the mid-nineties, Marvel and DC Comics put aside their differences and made a series of comics featuring mashed-up versions of their beloved characters, called Amalgam Comics. Characters included were the Super Soldier (Captain America/Superman), Dark Claw (Wolverine/Batman), and Speed Demon (Ghost Rider/The Flash/Etrigan the Demon). So, I made my own amalgamized character in Red Winter.

Red Winter is an Amalgam between the Red Hood, and the Winter Soldier, too similar characters from DC and Marvel, respectively. I am very proud of this character. I has kind of a monotonous look too it that I really dig. One self-critique I have with it is, that after drawing it I think I had too much Red Hood and not enough Winter Soldier, but hey. I still like it.

I have a list of possible Amalgams I could make after this, but if you guys have any feel free to tell me.

As always, C&C are welcome, and I will see you next time!

P.S. This will be my last post until Friday, as I will be away at church camp. See you then!

…Thank you. This is soo perfect. You’ve just combined my two favorite anti-heroes. It looks great!

Is his real name, James Todd or Jason Barons?

Most generic white person name. /s That was a joke