One of the greatest unsolved mysteries from the early years of Bionicle has always been Kapura’s teleportation power; it was never explained back then, and Greg’s always avoided it because it was “before his time”.

But now, with ten additional years of story to contextualize different powers, I’ve come up with a little theory that might explain it. I also figure that this topic could serve as a general Kapura-theory topic, since there doesn’t seem to be one right now.

Put simply, my theory is that Kapura’s armour (or at least his feet) has the power of a Teleport Kanoka, probably as the result of some workplace accident on Metru Nui.

First, there’s precedent for such powers; Ancient wore Levitation-powered boots/foot armour that allowed him to hover by stomping on the ground to activate the power. This method of activation leads me to my next piece of evidence: 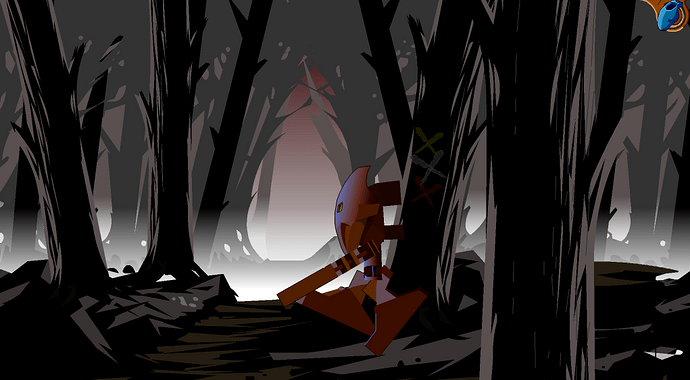 We are shown in MNOG that Kapura’s training involves taking large, heavy steps. If he were trying to activate powered boots, that would certainly be the way to do it. (Of course, he wouldn’t know that that’s what he’s trying to do, but Vakama might, and he’s the one who told Kapura to do it)

The fact that Kanoka lose their powers over time would also explain why his powers don’t work every time.

Of course, there’s one thing that this theory doesn’t explain: how does Kapura control where he teleports to? There are many possible explanations, none of which have any explicit canon backing.

My favourite option is that he’s just built different; maybe the same accident that gave him his powers (the one that I am assuming happened as part of my theory) also did something to his mind. Or maybe he was repaired with unique hardware.

Or maybe he actually doesn’t control where he goes, and just does a series of random teleports until he’s close enough.

Either way, what does everyone else think? Any other theories?

eh, I don’t really like this. It’s an interesting theory, but I like the mystery of Kapura’s teleportation better.

I had a little head theory that Vakama was training him to be the Vahi’s permanent user. This would involve sessions of allowing Kapura to come into contact and utilize small portions of the Vahi’s power. How they discovered he could do this is a mystery. (Maybe Kapura just did some snooping?)

What if instead of teleporting, he is actually slowing down time for everyone else and walking himself to his new destination? This could explain his oddly slow yet purposeful movements to other people, he is simply distorting time and it causes some odd perception issues (or perhaps his lack of refinement causes him to slow himself down at times too?)

Kapura has the power to create plot holes.

I had a little head theory that Vakama was training him to be the Vahi’s permanent user.

This is a neat concept. I think it needs a bit more fleshing out to explain how Kapura could control this power, but it would have been really cool if it was set up from the start.

but I like the mystery of Kapura’s teleportation better.

That’s fair enough, especially given how little of an impact it actually had on the story.

I mostly thought about this in the context of how Kapura might use his powers as the story continues on Spherus Magna, in which case it would have to be explained.

I imagined it kind of worked like Vakama’s visions. Because Destiny (latent power that he was always destined to have). Also perhaps if he became the permanent Vahi’s user, then by nature of the power of Time some of it’s energy seeped backwards to him through the stream

I prefer it to be mysterious; I have a headcanon that Vakama gave him some bull way to “train” in the forest to get rid of him for the time being. Then Kapura took it too much to heart and somehow learned through sheer willpower how to teleport.

There’s nothing scientific about it: Kapura’s power is just mysticism in BIONICLE, as there should be.

I mostly thought about this in the context of how Kapura might use his powers as the story continues on Spherus Magna, in which case it would have to be explained.

Or he had this power built into him for a completely unexplained reason by the Great Beings, like Vakama’s ability to receive visions from the Great Spirit Robot.

Kapura becomes the only guy able to carry an urgent message from one end of Bara Magna to the other in a split second!

I love this theory. I also like the distinction - Kapura gets places fast by traveling slow; that’s something more than just “teleporting”

The activity on this topic has reminded me of an addition to my original theory.

I haven’t quite figured out the specifics behind this, but I feel like any theory about Kapura’s power could do something with the fact that both known Matoran with special powers (Kapura and Vakama) worked in Ta-Metru, which was known for its Kanohi, and that both of their powers are similar to known Kanohi (Kapura’s ability is kind of like the Kualsi, and Vakama’s visions are pretty much the exact effects of a Mask of Clairvoyance).

Of course, this isn’t a perfect theory. The primary issue I can point out is that the Kualsi requires line of sight, while Kapura’s power doesn’t; Kapura’s unexplained power would actually be more powerful than the Kanohi it’s hypothetically emulating.

My personal headcanon is such that Kapura and Vakama were made using the same equipment around the same time. Faulty equipment generates misprints.

I also factor in the similarities between their abilities and known Kanohi powers. These Kanohi cannot function unless the Great Beings generate a metaphysical infrastructure in advance, an immaterial lattice by which the artificial physics of MU powers can navigate and operate, and by which the characters can harness said power.

The aforementioned “misprints” were simply an unintentional automatic access to individual abilities; abilities most beings could only access via particular Kanohi (the key to a specific lock, if you will). Although Matoran were specifically inhibited from accessing these abilities even via Kanohi, they do have the basic design infrastructure that permits such access, as is shown by their subsequent forms’ (Toa and Turaga) ability to access Kanohi power.

Kapura and Vakama were “misprinted” in that they could bypass two natural firewalls on their way to accessing a particular, arguably random power.

From a social angle, I think Vakama knew (or suspected) Kapura’s abilities were at least related to his own in nature, and empathized with the Ta-Matoran. That’s why he encouraged Kapura to take time, alone, to hone the skill- Vakama spent his younger days fearing his ability, and belittling himself for it, simply because he was subjected to the ignorant and condescending worldview of a city populated by insanely privileged and sheltered Matoran. Vakama didn’t want that mistake made twice, so he became the mentor he never had.