So today I bring to you my most recent Moc. This is my take on a G2 Karzahni

Onto the moc itself: 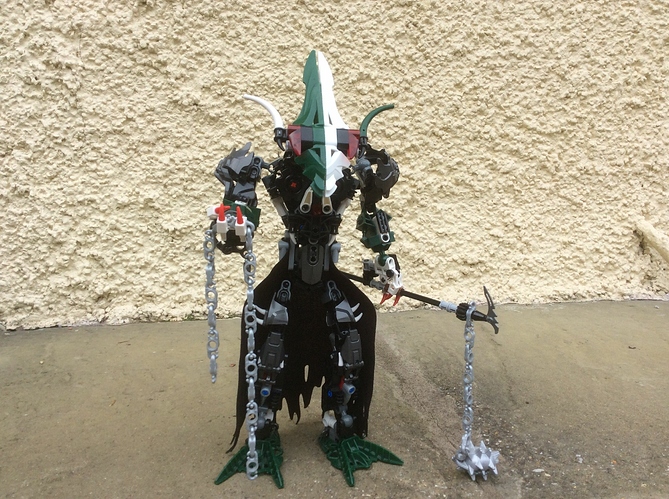 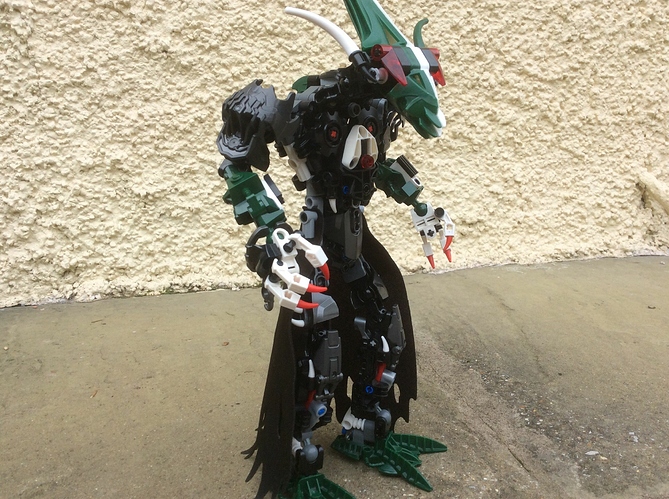 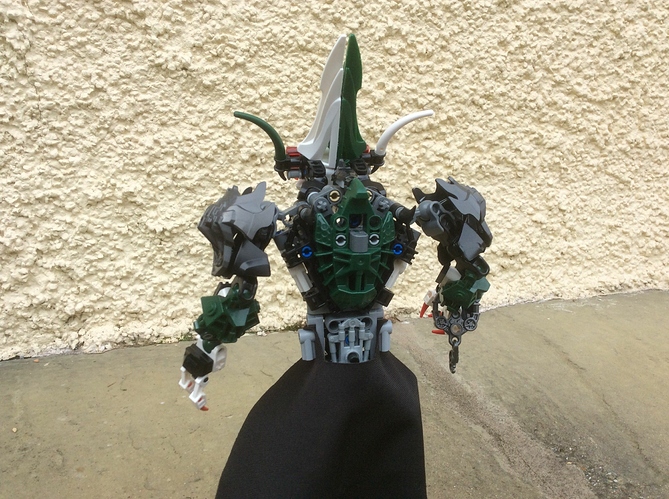 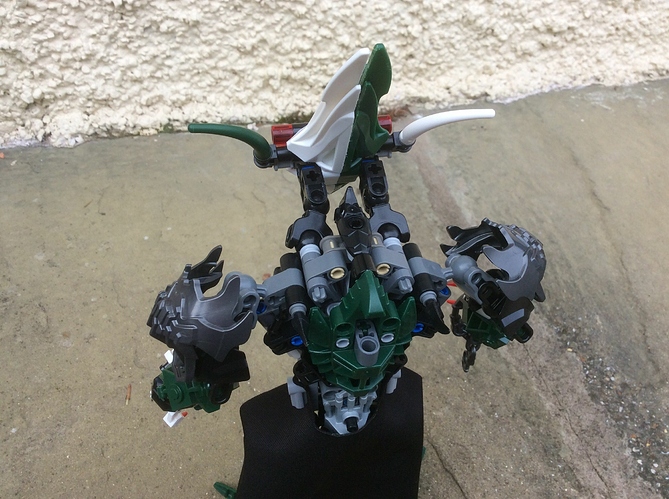 The trench coat thing (sir fangar’s cape) was a more recent edition to the Moc so it is detachable. 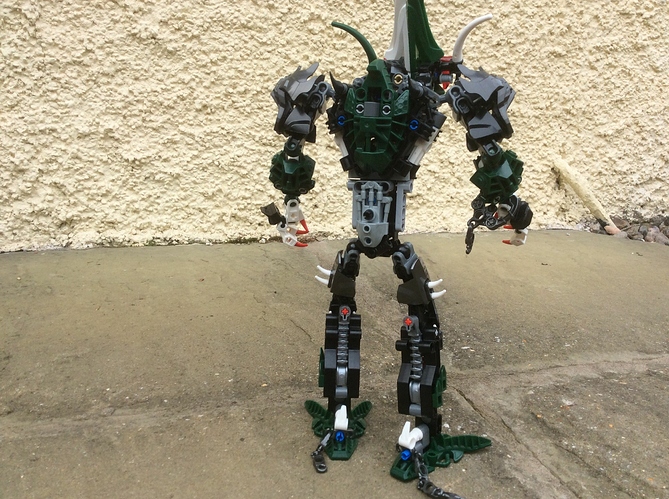 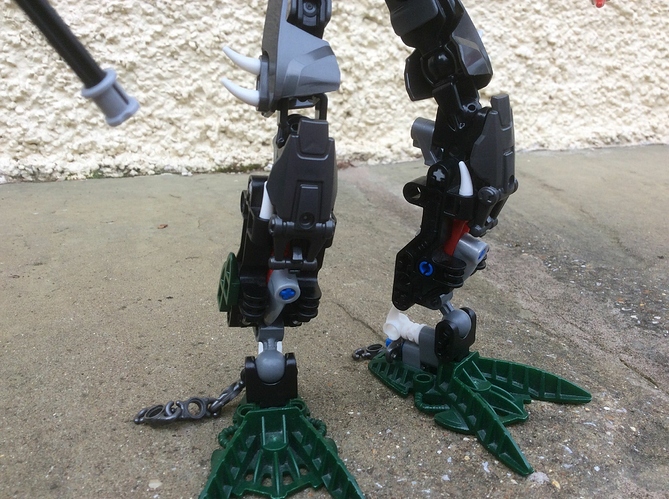 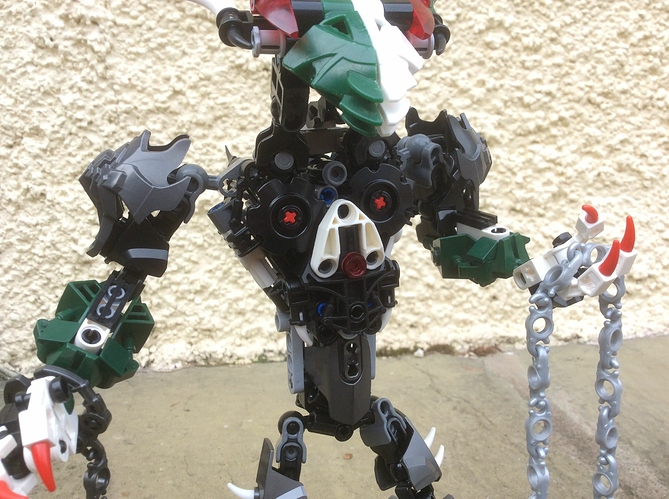 And finally, the weapon. I wanted to give this Karzahni a proper weapon as he has lacked one in the past. This is his flail, that he covers in the venom of a poisonous snake rahi that burns the the skin of anyone it touches, like acid. I thought it was a nice callback to his burning chains he had in G1 (according to Bionicle wiki). 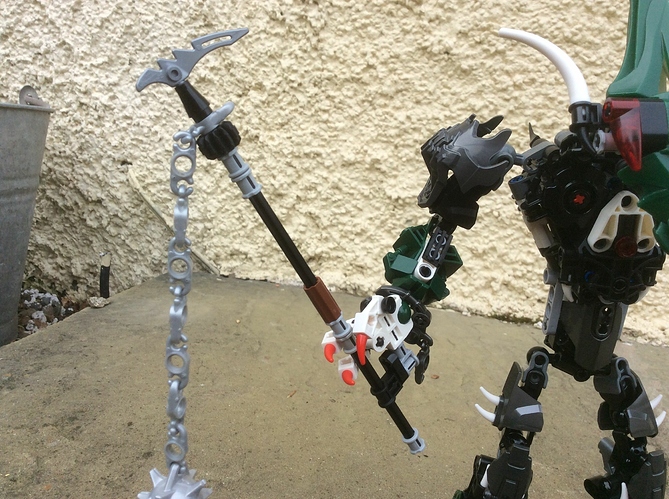 Here’s the backstory. please read it if you can!

Karzahni and his brother Artaka crash landed on Okoto (about 80 years before the arrival of the Toa) in the fire region. Artaka who was critically injured in the crash died in the first few days and karzahni waited alone until a group of fire villagers stumbled upon the wreckage of the ship. When they saw karzahni they were shocked by his extremely alien appearance and attacked him and knocked him unconscious. When he awoke he was in an asylum for freaks and the insane with chains around his feet and wrists. He spent months locked away in that fire village, turned bitter by his brother’s death and developing a deep hatred for the people of Okoto. it was in that cell that he realised his power. His species had the ability to send each other images and visions telepathically. But when used on the villagers, especially those with twisted or broken minds, they believed the visions and in most cases thought it was the future. He used this ability to make the other people in the asylum fear him and they therefore obeyed him. One stormy day when the captives of the asylum were let out for their monthly exercise, karzahni used his new found army and they killed the guards and escaped, raiding the town for supplies on their way out. They got to the southernmost point of the fire region without running into any more civilisation. From there they took a rusty old boat they found abandoned on a beach to one of the small rocky islands at the south of Okoto (the island actually exist). On the smallest of the two island karzahni found an ancient stronghold long deserted. It was there he made his home.

Time passed and he grew angry at his people simply because they where the same species that were so cruel to him and chained them up in cells tormenting them with visions of what’s to come.

One night the mayor of the village he in which karzahni was once contained, mysteriously claimed to have a terrible vision of what would happen to Okoto and the only way to avoid certain doom is if each region sends their insane and “misconstructed” to one of the southern islands. So every month a driverless raft lands on the shore of Karzahni’s Island full of new additions to his “collection.” Karzahni takes great pride in his collection, the best additions being a boy posessing two elements, a jungle villager born with raptor legs and even a giant goblin shark.

Eventually though people stopped sending a raft to karzahni when medical knowledge improved and the people started to treat the insane instead of lock them away. So karzahni faded into an urban myth forgotten by most- a story used by parents to make their children clean their masks or “karzahni will take you away” but still he dwells on his island still bearing the chains he was put in, waiting for the next raft and wondering if the rumours about 6 elemental warriors that came from the sky are true, and how they would make a great addition to his collection.

The End… for now

I’m very proud of this moc and its almost Sith Lord appearance. It’s a shame I built this after the 1st anniversary contest. Hope you like it! Constructive critism appreciated as usual.

I like this moc dude, backstory is G1 inspired but different at the same time

Firstly, this MOC is incredible. It is really, really, good. Very well done, I love the gears on his chest, and those claws. The Tunic/Robe/Skirt is really cool as well. The torso build is fantastic. Well done, 19/10

Is that referencing me?

I love it nice job

I totally forgot to include this so here it is now: 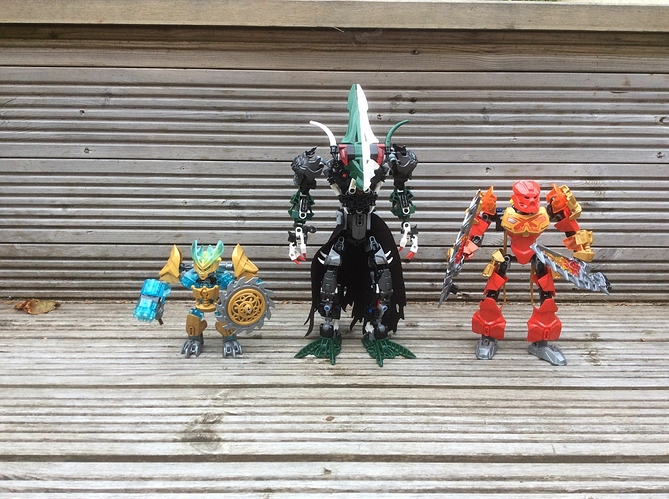 It looks like he’s a head taller than Kulta.

I really like the style. good work and execution

Thumbs up all around!!!

By the way, it’s spelled “Karzanhi”.

Really love the tattered and asymmetrical look he has, definitely fits Karzhani.

According to Lego it’s spelt Karzahni, but maybe it’s spelt different in some countrys/regions??? 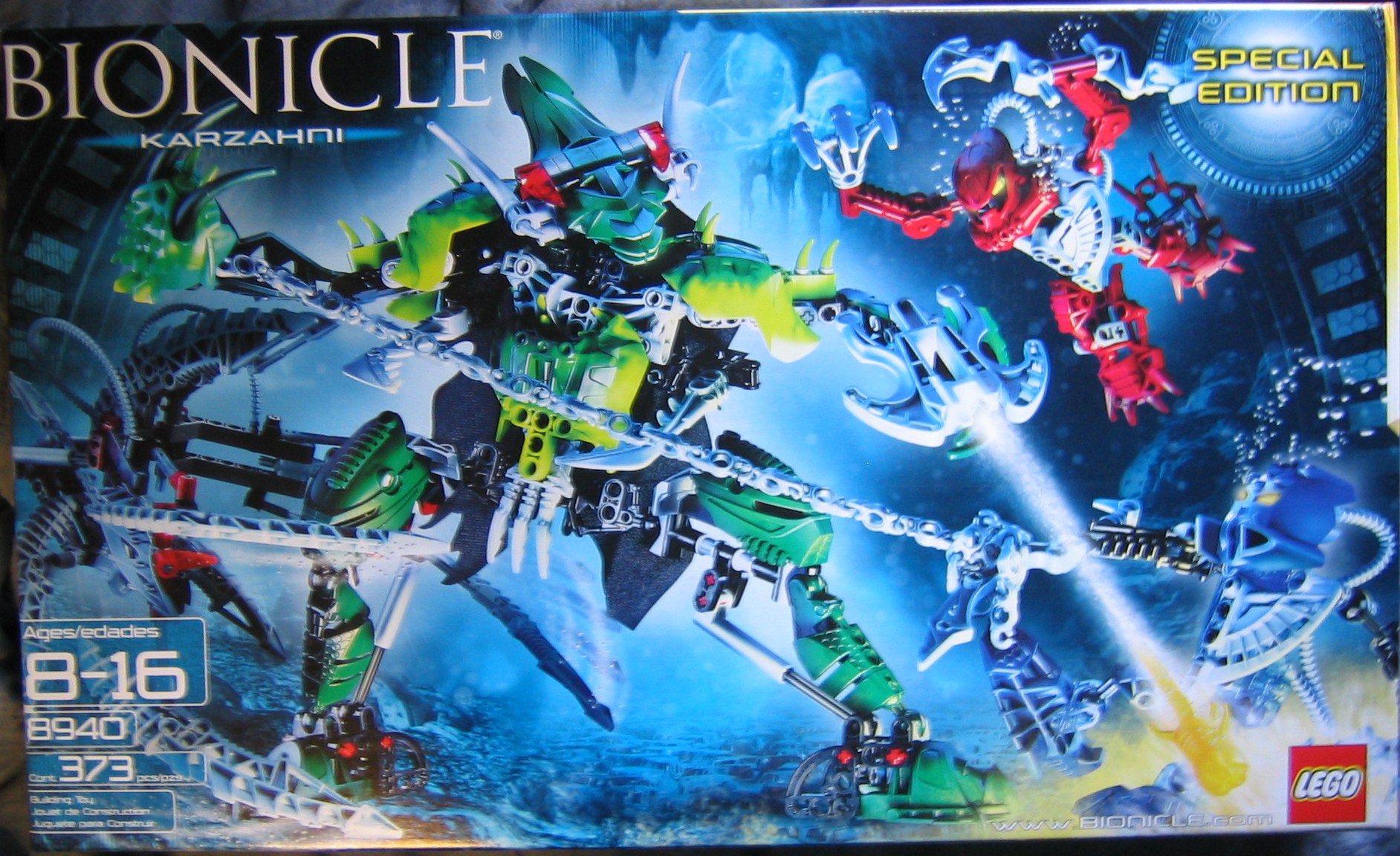 Wow! honestly, better than the official one! Ahem, I mean… anyway, onto the review.

Hm. It doesn’t really looks like a “G2” version, but it’s still a great moc!

making it a good Moc came before making it look G2 but I understand how it doesn’t fit in with the G2 sets very well- but I kinda like the fact it looks very “alien” in the G2 universe.

Sorry @helryx that this is in your response. I couldn’t as far as I’m aware create a separate post because I’ll get flagged for double posting. @DeepfriedMctoran, @Onyx_ , @Stoax , @SwagMeister and @DoremarNuva, thank you all very much for your constructive critism, praise and contribution/opinions.

I have a question regarding a feature of this Moc. I would like to know if you guys think I should keep or lose the white spikes on the upper legs. They interfere with the cape slightly but look good in my opinion. I just don’t know whether the aesthetic is still nessasary as it makes the flow of the Cape look slightly weird at some angles. It’s only a tiny problem though. Please let me know what you think!

I have a question regarding a feature of this Moc. I would like to know if you guys think I should keep or lose the white spikes on the upper legs. They interfere with the cape slightly but look good in my opinion. I just don’t know whether the aesthetic is still nessasary as it makes the flow of the Cape look slightly weird at some angles. It’s only a tiny problem though. Please let me know what you think!

It doesn’t need it, but it doesn’t really matter whether you take it on or off.