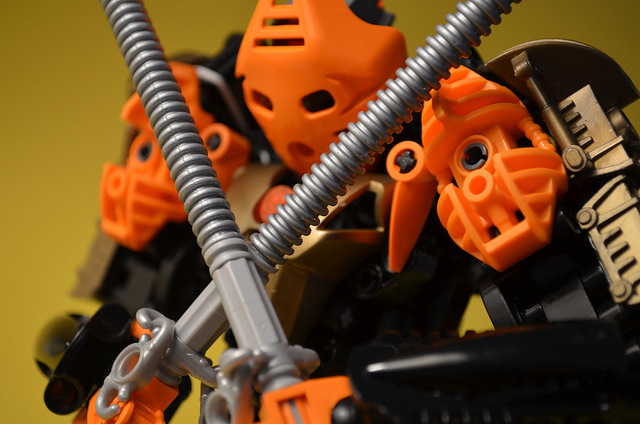 Kejero is a Toa of Iron, formerly headstrong and confident in his own abilities, which allow him to defeat basically any opposition. However, after an incident involving someone with a power-blocking ability would have ended in his own demise had it not been for the intervention of Baruka, Kejero's overconfident nature was broken. He now takes a more humble approach to the world, though no less powerful, attempting to dissuade others from being just as brash as himself.

Are you going to add any actual new MOCs anytime soon?

Dude, this MOC is awesome! I love the use of orange and Metru gold, it really seems to fit together.
I like his weapons too, all of them unique and very well made.
Great MOC overall, I don't think I really have any complaints.

@Axonn126 Thank you!
@Hawkflight Yep. Got some deadlines coming up - namely the September BZP flickr contest.

Out of curiosity, are the weapons based on hook swords?

@Garnira Thanks! Yes, they were an inspiration.

That really reminds me of Phos

Oh, sorry to hear that. Was there anything you thought was good about the MOC?

(Oooh sick Phos burn. He's a nice guy, his MOCs aren't the worst, I'm just not a fan of his style of proportioning and such.)

Ah. In that case, the original Nuparu probably looks like Phos, then, doesn't he?