So I finally decided to upload pictures of my Self-MOC. I’m mostly doing this to try and get some feedback to improve him. So without further to do, Here he is: (here I am??? idk) 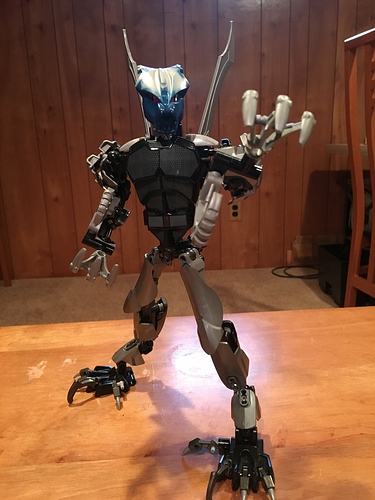 The general thing I was going for was like a mix between a werewolf and a raptor, thus the big slashing toe claw. I also added opposable thumbclaws and Tahu 2015’s back blades because why not? Unlike Tahu 2015, those blades do not detach, and are used to convey his mood as well as focus and store his elemental energy. Speaking of which…
#Name:
Kiixaar (KIKS-ar)

#Powers:
Lightning, comparable to a Toa of Lightning

#Species:
Prototype Rahksi Replacement, the only one of his kind ever made.

#Backstory and other relevant information… 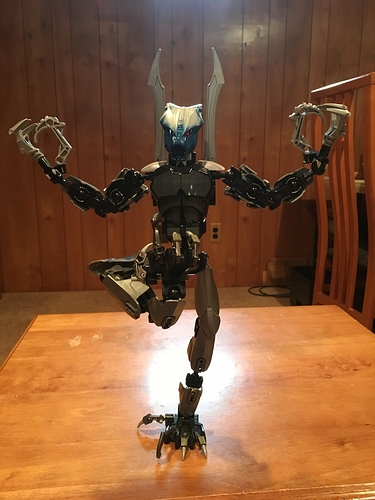 “Pass into the Iris, while you still can.”

His creator was a Makuta who desired to make a more Toa-like version of Rahkshi, one not reliant upon Kraata or Energized Protodermis. And so, grown from organic Rahi DNA mixed with transformative viruses and combined with tough protosteel machinery, Kiixaar was born. He was given a great Avsa, the only spare mask his creator had. The Makuta who built him overlooked a small island populated by a single village of Vo-Matoran, protected by one Toa and one Turaga.

One day, the Toa drowned after fighting off some Rahi near a cliff. The Makuta took her body and though a process known only to few, passed on her Elemental Energy to Kiixaar. Eventually, the Makuta left for Destral, and never returned. The Brotherhood of Makuta sent many Rahksi and Visorak to the island in an attempt to recover the lost work. Kiixaar, sensing the death of his creator, whom he referred to as Father, destroyed any Rahkshi and Visorak who came.

Kiixaar did not know much, but he did know that he was made to replace the Rahkshi, so he hunted them with a special passion whenever they arrived. Eventually, without his Father’s guidance, he grew to hate the Rahkshi. He would rip their shells apart and eat the Kraata inside.

For their part, the Matoran of the Island knew only rumors. A strange Rahi with Lightning powers, the shredded remains of Rahkshi armor strewn across the forest floor, and the sizzling remains of Visorak lying still as a familiar haunting howl echoed in the distance. Kiixaar never revealed himself to the Matoran, as his Father desired to keep him secret. Nevertheless, he protected them as their fallen Toa once did.

Eventually, he honed his elemental powers to work in tune with his mask. He would pin down his prey, and with a single stroke of his claw, he would drain all of the electrical energy from his target. This tactic proved invaluable, as both organic and robotic foes would be left dead, or incapacitated if he desired to suck the electricity from only their limbs.

But things always change… The Matoran have grown inquisitive, the Brotherhood has grown suspicious, and strange footprints were discovered on the beach… 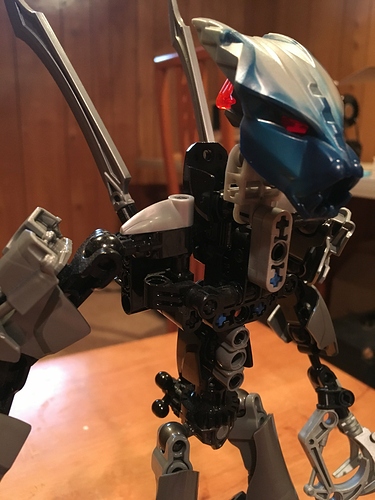 So here are some images of what it looks like with the chestplate removed. 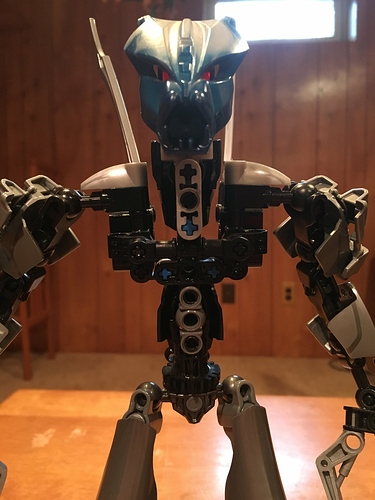 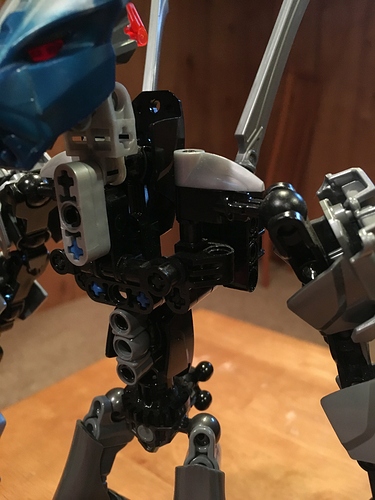 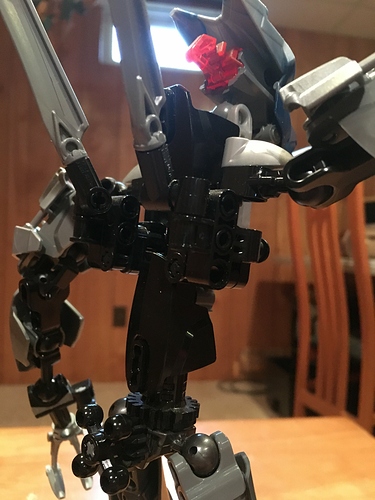 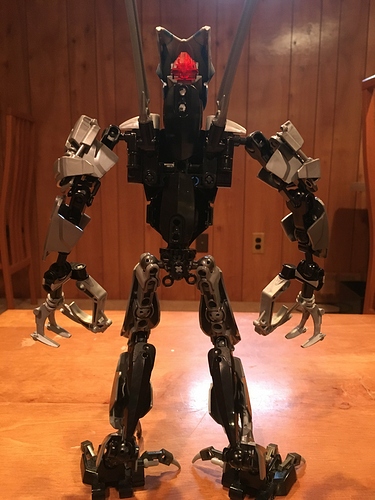 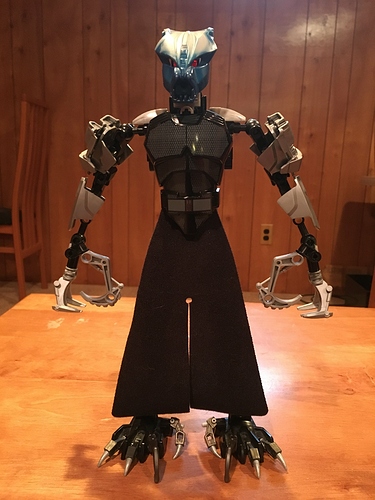 And one with the back blades down and him wearing Kylo Ren’s Cloth Waistpiece.

So, what are your thoughts? What improvements or changes can I make? When it comes to CCBS, my most numerous parts are in Black and Silver, but if you had to suggest a new Color Scheme, what would it be? Personally I’d like to visit Bricklink for some pieces that are either regular Orange or Keet-orange, both of those work well with Black. One thing I will not change is the Avsa, because it is my favorite mask.

I would adjust his legs(two knees doesn’t really look good unless you bend the middle portion into Sanghelli legs) and give him a bit more meat or/and make him less tall and lanky.

I think this could become something really cool.

Not bad at all, I like the hands and feet.

I like the idea behind the moc, and I like the mask too, it fits well with the werewolf idea.
If I were to change anything, I would try and bring the shoulders in a bit, and maybe drop the neck. It would mean the chest plate wouldn’t fit anymore so maybe a custom chest, something like the k2s0 set. Also, I’d keep the kylo Ren Skirt, it looks really cool.
Nice work

Overall I think this MOC is really nice. Whilst the limbs are simple, he definitely benefits from the entirely custom torso, and the broad shoulders certainly give him an imposing presence. The Kylo Ren skirt is a nice addition too, and adds to his overall aesthetic.

One that I might suggest changing however is the chestpiece. I would consider replacing it with a black shell piece, but with a silver chestplate extender thing ontop of it to make the change from his black body to his silver arms less immediate. Other than that, this MOC already looks fairly nice, and if more complexity is added in the future, I think he could become an even better MOC.

@Boxxer and @Ulti, a custom chest piece is definitely something I’ll look into making, Thank you two for suggesting it. I have one question:

@Kiixaar
Personally I would choose Keet-Orange to replace the silver parts, as Orange/Keet-Orange blends better with black than silver. If you’re going to change the colour scheme, I’d recommend getting an Avsa without any blue or silver (so basically replace both colours with black and Keet-Orange)

Yep, Venom has custom painted masks available for commission. I wanted to get people’s opinion before I commit money to a color I might regret.